What is freeze-dried honey? Meet the Chatham Islands apiculturists turning their liquid gold into meringue-like chunks The Chatham Island dragon tree, Dracophyllum arboreum, could teach the post-pandemic business world a thing or two about pivoting. This unassuming native tree, known to Māori as tarahina, is endemic to Rēkohu and its neighbouring islands of Rangiauria (Pitt) and Rangatira (South East Island), where it thrives in the face of adversity.

Most trees would have their heads ripped off by the Chathams’ notorious squalls, but tarahina has flourished, thanks to a shapeshifting sleight of hand known as heteroblasty. As a juvenile seedling, Dracophyllum arboreum is stout with sword-like leaves — imagine a cabbage tree accidentally shrunk in a clothes dryer. But when it reaches flowering age, it dramatically changes form, growing into a scraggly tree with tufts of narrow, needle-like foliage and sprays of white summer flowers reminiscent of wild heather.

This evolutionary survival mechanism has proved a boon for the island’s bee colonies and for apiculturists Kaai Silbery and Francesca Bonventre, who have conjured up a magic trick of their own, turning liquid gold into hokey-pokey clouds of ambrosial Go Wild freeze-dried tarahina honey. Necessity was the mother of this melt-in-your-mouth invention. In 2018, Kaai oversaw the creation of a special Chatham Islands on a Plate category at the Chefs Association’s Hospitality Championships to showcase the island’s premium products: whole blue cod, crayfish, kina, live pāua and floral honey. The kaimoana would be flown to the mainland fresh from the sea, but the honey, sourced from Mana Cracknell’s hives (Kaai’s uncle), caused a bit of consternation. He’d unceremoniously decanted it into a motley collection of recycled containers with mismatched lids and peeling labels.

“I couldn’t take our island’s beautiful honey to a prestigious competition looking like that!” Kaai recalls with a laugh.

As she pondered her honey-packaging problem, Kaai had a brainwave that drew, not on her 25 years’ experience plating up innovative ingredients in some of the country’s finest restaurants, but on a teenage dream to serve food in space. (“When she’s wearing her bee suit, she does look a bit like an astronaut,” quips Francesca.)

“I majored in food science and culinary arts at university,” explains Kaai, “which is where I first learned about molecular gastronomy and freeze-drying foods to lock in all their minerals and vitamins. People have ‘cooked with cold’ rather than heat for centuries, but the process didn’t really take off until man went to the moon.”

Through her hospitality background, Kaai was already familiar with the freeze-dried raspberries and mandarin segments manufactured by Fresh As, so she approached the company to whip up a bespoke batch of freeze-dried honey. As soon as they saw the finished product, Kaai and Francesca realized they’d created something special. “Everyone was so excited.”

What gives freeze-dried honey the wow factor? As its moisture content is vaporized and vacuumed off, what’s left are meringue-like chunks of candyfloss fragility with an unrivalled purity and intensity of flavour — not to mention space-age weightlessness — that has found favour with high-end chefs, tourists and locals alike. 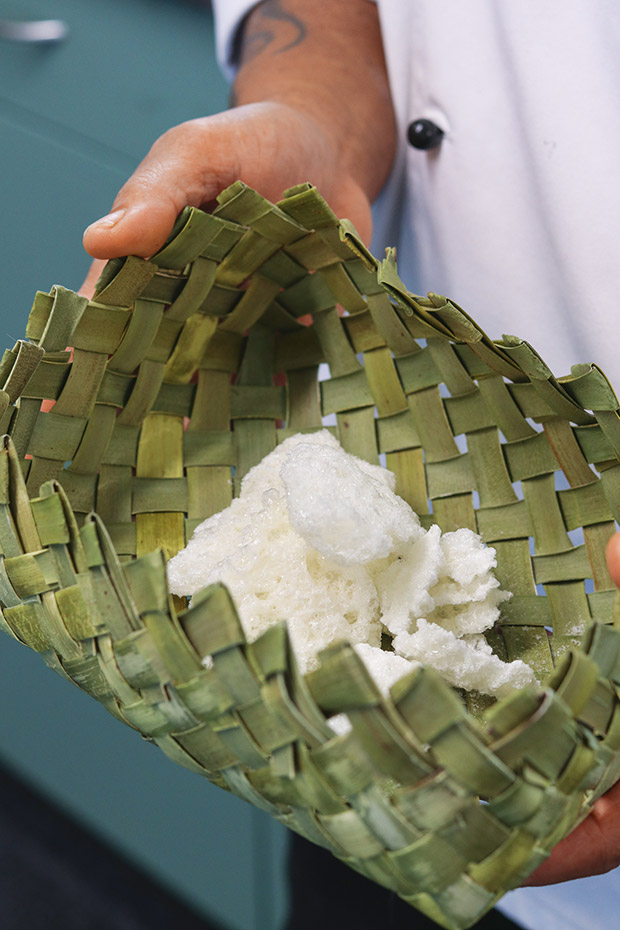 At Hotel Chatham, where Kaai was head chef for eight years, blokes at the bar have been known to slip a chunk of honey rather than a wedge of fresh lime down the necks of their beer bottles. Kaai’s diabetic father keeps a packet at his bedside (dissolving a lump on his tongue quickly corrects blood sugar lows at night). In her own culinary creations, Kaai uses freeze-dried honey in sweet and savoury ways, crumbling it over smoked blue cod chowder and ceviche or folding it into artisan honey and walnut ice cream.

“Though I tend to sway towards Italian cuisine at home,” she says with a cheeky nod in Francesca’s direction.

Left-field thinking, entrepreneurial passion and modern technology are hallmarks of Kaai and Francesca’s life together. They met online, with Francesca flying from Rome for their first date. Neither expected to put down roots on Rēkohu. Kaai (Ngāti Rākaipaaka, Ngāti Kahungunu, Tainui) was supposed to be passing through when she took up a month-long temporary role at Hotel Chatham in 2014 on her way to a permanent cheffing position in Papua New Guinea.

But when she stepped foot off the plane, she felt the whenua welcoming her: “I felt like I’d come home.”

Meanwhile, Francesca was welcomed by the rather unromantic sight — at least by Kiwi standards — of golden gorse flowering around the airport.

But she has a soft spot for this noxious weed, not just for its year-round value as bee fodder, but because it reminds her of wild broom blooming on the hillsides back home in Italy.

Just as 19,240 kilometres couldn’t keep Francesca and Kaai apart, 80 million years of isolation have proven no barrier to the Chathams’ fledgling apiculture industry. It’s actually a global competitive advantage, as there are no varroa mites, no American foulbrood disease and no wasps requiring pesticide treatments. Bolstered by a biodiverse diet of local flora, Chatham Island bees are among the healthiest in the world.

Of the roughly 400 native plant species in the Chathams, 47 are found nowhere else on the planet. There’s no mānuka, but there are akeake, harakeke, hebe, koromiko, kōwhai, mingimingi, pouteretere, tarahina and the island’s famous blue forget-me-nots (Myosotidium hortensia), plus exotics including clover, roadside yarrow and wild brassicas. Like most of the locals, Chatham Island bees are resilient and self-reliant. In the early 1800s, the British black bee (Apis mellifera mellifera) established itself after escaping from a cargo ship. “They’re a bit feral and aggressive,” says Francesca.

In the 1970s, the Ministry of Agriculture oversaw the addition of Italian Apis mellifera ligustica bees (“much more laidback”) to calm and strengthen the gene pool. Then in 2008, 40 nucleus hives of carniolan bees (Apis mellifera carnica) were introduced by Uncle Mana and his partner Michele Andersen, who had the foresight to imagine a future where disease-free queens could be bred and exported.

Mana sadly passed away in January, but his mentorship was invaluable when Kaai and Francesca began to build up their own bee numbers. In 2019, the couple bought a remote seven-hectare bush block near Blind Jim’s, where tourists fossick for fossilized shark teeth on the shores of Te Whenga lagoon. Having started with four hives, the Go Wild apiary, which backs onto a large tract of regenerating tarahina forest, is now home to 45.

Most of the island’s 200 or so beehives are maintained by hobbyists, and Chatham Island honey has never been commercially available to anyone aside from tourists visiting the hotel’s gift shop. Kaai and Francesca are on a mission to change that. They’ve embraced eco-tourism, offering walking tours through their apiary, and launched a children’s bee club, acquiring funding for beehives so that every child can go home with their own hive.

Go Wild’s freeze-dried honey has already won a gold medal at the 2021 Apiculture New Zealand Honey Awards and a silver medal at the 2020 Outstanding NZ Food Producer Awards, and work is underway at Waikato University to investigate the unique characteristics of the island’s raw honey. Kaai and Francesca are soon to extend their range with new freeze-dried products in the pipeline, including honey and berry sherbet, a pre-mixed honey and beetroot gravlax powder and a freeze-dried honey and soy sauce, designed to be dusted not drizzled.

“Our hope is to see our honey industry celebrated as much as our traditional industries of fishing, farming and tourism,” they say. Make this dish with any raw fish, but on the Chathams, it would be sacrilege not to use blue cod. Chatham Island Food Co’s snap-frozen chatham blue is available for home delivery in New Zealand from chathamislandfood.com.

Pat fish fillets dry with paper towels. In a small bowl, mix beetroot powder, salt and honey powder and then sprinkle over both sides of the fillets. Cover with plastic wrap and refrigerate overnight.

When ready to serve, mix crème fraîche, horseradish and mayonnaise. Deep-fry capers in hot oil until crispy, then drain on paper towels.

To serve, gently wipe any excess curing liquid from fish and thinly slice on an angle. Dot with mayonnaise mixture and garnish with lemon segments, fried capers, dill sprigs and edible gold leaf.