What is hard seltzer? These young Kiwis developed an alcoholic sparkling water with a feel-good factor Mix three siblings with a passion for conservation and an on-trend sparkling summer drink and — hey presto – a party with purpose. At least, that’s the plan of the family behind homegrown Native Hard Sparkling, a premium pre-mix tipple that’s going great guns after just a year in business.

“We want to see if we can clean up the alcohol industry with a new brand that has a different kind of purpose than just selling volume,” co-founder Guy Hobson says. Guy founded Native Hard Sparkling in 2019 with big brother Matt, little sister Brooke and Matt’s long-time mate Luke McBride.

None of them has any real experience in drinks production, but they’ve long had an eye out for a joint project. Matt and Guy collaborated on various entrepreneurial schemes to fund themselves through university, and they all contributed to an “ideas book” full of grand plans.

While Matt and Luke had once considered making an alcoholic drink containing electrolytes (“so you’d wake up in the morning feeling better about yourself,” Matt says), they hadn’t seriously considered entering the liquor business until they discovered hard seltzer in November 2018. “That was my experience of the industry – drinking it,” Matt jokes. “Hard seltzer” sounds like the sort of drink found in a 1920s speakeasy, but it’s more modern than that. It’s popularity in the States has grown substantially in the past two years (The New York Times called it “the drink of summer 2019”) and it has a similarly fast-growing fan base in Britain, Australia and Aotearoa. In basic terms, it’s fizzy water spiked with alcohol (usually vodka, rum or gin) and flavoured with fruit. Luke and the Hobsons could see an opportunity for a premium New Zealand version, but they wanted the feel-good factor of drinking their product to last longer than just an evening out.

The eureka moment came when they discovered an unlikely alignment between alcohol consumption and the environment, explains Brooke. “We found that one in 10 adults in New Zealand actively supports conservation efforts regularly, but eight out of 10 understand that a thriving environment supports our overall wellbeing. Then we discovered that eight out of 10 adults consume alcohol routinely. That was our bridging-the-gap moment.”

The foursome partnered with the FoodPilot network at Massey University to develop what they call alcoholic sparkling water. The first drinks were made at the university’s research microbrewery; then production shifted to Kererū Brewing in Upper Hutt. Unlike some hard-seltzer varieties, Native’s alcohol base comes from fermented and distilled cane sugar, resulting in low levels of carbohydrates or sugar. The alcoholic component is relatively light too – at 4.6 per cent ABV (alcohol by volume), it’s less than the average beer. 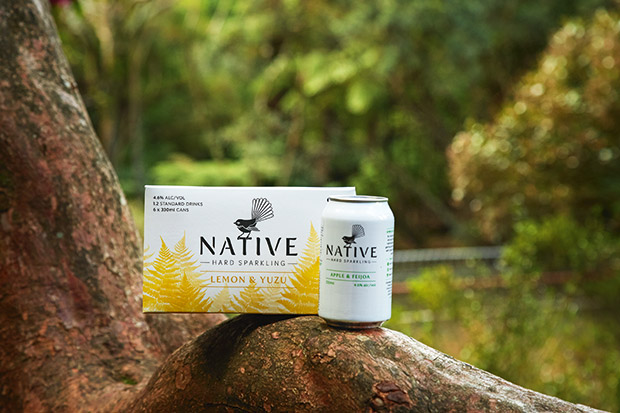 The four fruity flavours – lemon and yuzu, berry and blackcurrant, apple and feijoa and kiwifruit and lime – are locally sourced where possible, including in the Bay of Plenty and Hawke’s Bay. The combinations are distinctively theirs in more ways than one – Matt and Guy developed the original concept for the kiwifruit and lime flavour in Matt’s Wellington kitchen, while the lemon and yuzu is a nod to Guy and Brooke’s ski season in Japan.

“We wanted to create something that we could proudly share with family and friends,” Guy says. They’ve also carved out a nice little niche by being the first alcoholic sparkling water in New Zealand to be available on tap, which means they’re a surprisingly popular option at craft-beer festivals. At Beervana in 2019, the lemon and yuzu flavour was voted the No1 drink in the afternoon session; at Wellington’s Beers at the Basin festival a few months later they were the top-seller. While recognition and success are good, the Native team are more excited about what it means for their environmental goals. Rather than make vague claims about their conservation chops, they’ve decided to make their support tangible.

“We wanted to make it easy for New Zealanders to support conservation projects across the country,” Brooke says. “That’s what drives us.” To that end, Native sponsors kiwis from hatch to release at Pūkaha National Wildlife Centre in the Wairarapa. The foursome plans to extend similar support to 100 other individual native species. They also fund self-resetting traps through Squawk Squad and enable online shoppers to fund a native tree at the click of a button through tree-planting charity Trees That Count. Matt says the siblings’ strong conservation focus and entrepreneurial spirit stems from their rural roots, when they were growing up on the family farm in Waituna West, Manawatū. “Growing up, we were all little tackers running around, giving mum and dad a hand. That mentality of getting stuck in has continued. We all bring a different skill set, and we’re all individuals. Guy and I do most of the talking, and we link in Brooke to get approval and sign-off. And Luke is the glue that keeps us all together.”

While Covid-19 has meant many of the events at which they’d planned to showcase Native Hard Sparkling have been cancelled, it’s also given them time to think and plan. “That’s been the one benefit, I guess,” says Guy. “And it’s important for us because we aren’t a massive company with a million-dollar marketing budget; we’re a family-run team, and we’ve bootstrapped it ourselves this far.”

Even so, they have their sights set high. “New Zealand has several endangered species and its own challenges ahead, but there are a hell of a lot of other countries facing similar issues that need the same kind of support. “We would love to see Native across multiple countries, becoming a drink that locals are proud to enjoy and continuing our conservation mission. For future generations to be able to walk through a native forest planted by the previous generation’s Friday-night drink choice… now that would be a great story.”

More stories you might like:
What is a honeyberry? Meet the Nelson couple trialling the odd-looking, nutritious fruit for New Zealand conditions

HOW TO ENJOY THEIR DRINK

Fill a glass with ice, add a thumb-full of gin and top up with Native Hard Sparkling Lemon & Yuzu. Add a slice of lime and a couple of mint leaves for a guaranteed refreshing gin.

More ambitious drink-makers might like to try the recipe for Spiced Hard Sparkling & Whisky (below) from Wellington cocktail-makers J.M.R & Co. It’s a twist on the classic Japanese favourite, suntory and soda. 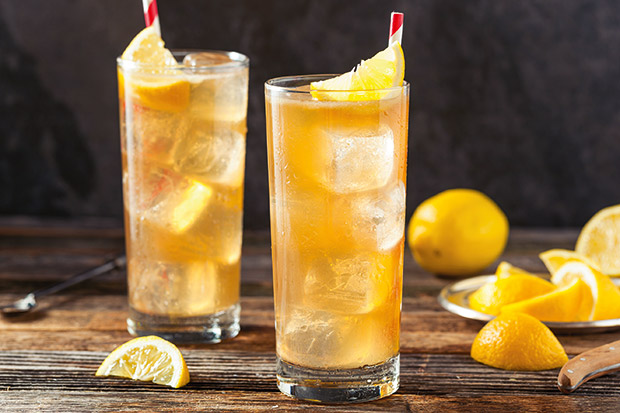 Reduce heat and simmer for 10 minutes. Remove from the heat, then cover and let steep for one hour. Strain and ditch solids. Cover and chill syrup until cold. Store in the fridge for up to a week.