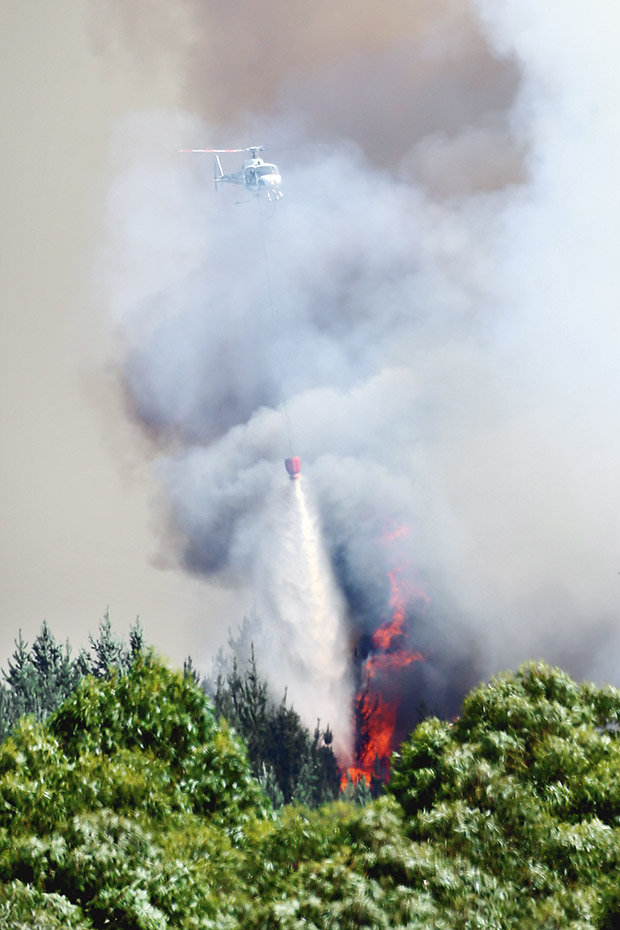 In early 2019, hundreds of lifestyle blocks and thousands of people just south of Nelson were threatened by one of NZ’s largest-ever fires. In the soot-covered aftermath, we look at practical steps you can take to avoid the ravages of fire.

Guy Mollett took a photo as he left his block in the Redwood Valley on February 7.

He stayed an hour past the 7pm evacuation deadline, hosing down grass, wood piles, anything he thought was flammable, in a desperate bid to save the family home. He only left when he started to feel the heat from the flames rolling down the hill behind their property.

But thanks to heroic firefighting and some careful landscaping choices, the Mollett family returned the next day to find their home intact. It only took one demonstration about rural fire safety at a local workshop to open Guy’s eyes to the risk of fire. 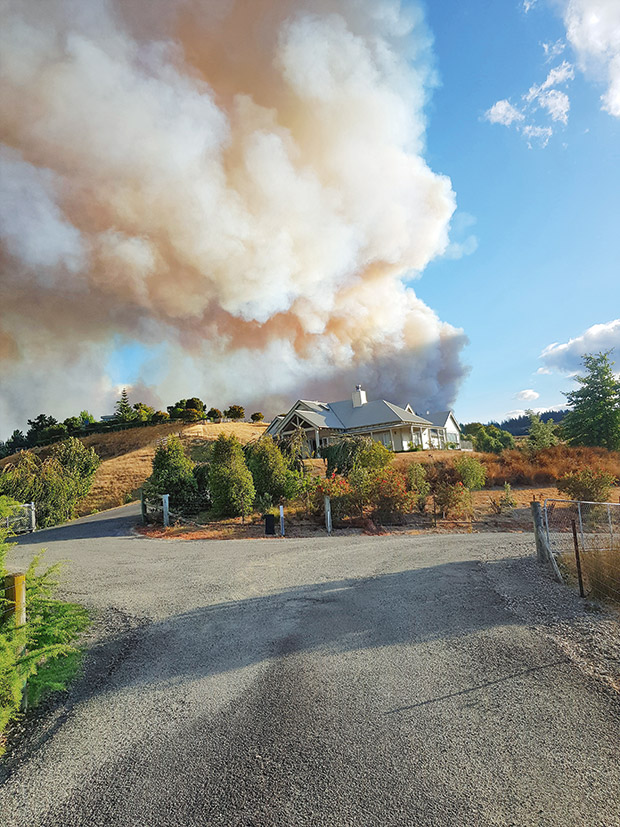 Guy Mollett thought this was the last time he would see his Redwood Valley home. He took the photo as he was evacuated.

When the Molletts bought their 2ha block, Guy rolled up his sleeves, clearing gorse and the established fences. He replaced wooden fence posts with waratahs in some places, something that would pay dividends on that awful day.

The Appleby Rural Fire Brigade workshop included a discussion on plants that don’t burn easily. It convinced Guy that mountain flax would be the best option around the house.

“I needed something that would grow in bare clay, hold the soil together, and give us a ground cover which would be less flammable than grasses,” he says.

It’s a decision that helped to save the family’s home. Now Guy is helping Fire and Emergency NZ to promote sensible planting and diligent housekeeping to other lifestyle blockers in the Tasman area. He has plenty of sound advice to pass on. For example, the waratahs he used in his fence lines didn’t burn, but wooden ones did, fuelling the fire. The fire got to within metres of the Mollett’s home.

He regularly practices ‘good housekeeping’, removing any dead material around the property which could feed a fire. He recommends other rural people do the same, and that they do a serious ‘stocktake’ every spring, looking for potential hazards.

It can be as simple as the family dog’s bed. Guy says they used to have one sitting on the front deck. “That would have gone up in a flash.”

A hedge leading up to the house was replaced with low flammability, native griselinia. Guy is careful to keep the grass around the property short.

“I recommend people keep making ongoing assessments around their property. Some people are saying ‘it’s happened to us now, we’ve had our turn,’ but I’m not stopping.

“Complacency isn’t helpful. Don’t leave it until a fire is heading towards you. We thought we had hours to prepare and look what happened.”

LESSONS FROM A PLANT BARBECUE

Dr Tim Curran has a special barbecue, but he doesn’t use it for cooking his favourite sausages. In the great Kiwi tradition, it’s a 44-gallon drum cut in half lengthways with a gas grill that maintains the temperature at 150°C.

The senior lecturer in ecology and his team use the ‘plant barbecue’ to test the flammability of plants, roasting over 200 native and exotics so far. 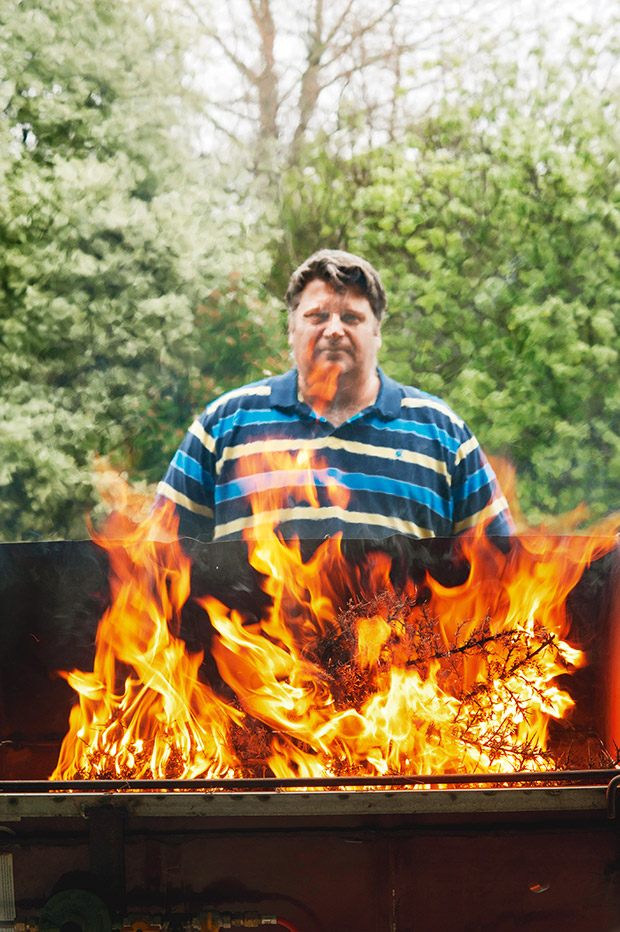 Finding out the flammability of common plants is vital as NZ starts to experience climate change, which is bringing longer, drier summers to many regions. NZ has already had two major fires in rural areas in the last two years: Christchurch’s Port Hills in 2017, and the Tasman District in 2019.

Fire & Emergency NZ is encouraging people to take long-term steps to protect their blocks, such as protective landscaping and year-round maintenance.

One option is low-flammability plants which might slow down a fire or protect a property in some situations. Each plant is carefully tested during its time on the barbecue.

Tim Curran’s team from Lincoln and the University of Auckland is working out which plants are best. They heat 70mm-thick cuttings on the plant barbecue, then ignite them with a blow torch.

“This process mimics fire approaching a plant, initially drying off moisture as it gets closer, and then igniting it,” says Tim. “During the experiment, the researchers recorded the ignition time; the maximum temperature at which a sample would burn; how much of the plant burns; and the total burn time.”

They found that applying a blow torch to pre-heated branches of manuka, kanuka or eucalyptus quickly drove out flammable oils, and the resulting fire was almost explosive. 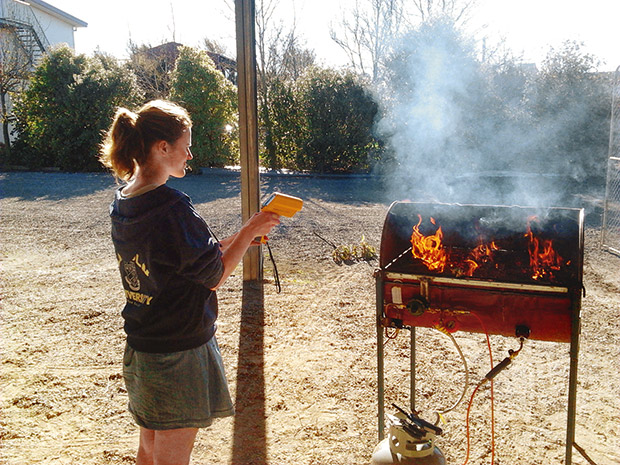 Of the 60 species tested in the original experiment, both natives and exotics, 27 showed low flammability.

But Tim’s team found it wasn’t as simple as finding species which did or didn’t burn. Their work showed the flammability of cultivars and sub-species of common plants could be quite different. For example, flax (and mountain flax) has a low flammability level, but a variety called Dark Delight didn’t burn on the barbecue at all. Damage caused to Tasman farmland by the 2019 fire.

It will also depend on the condition of your plants, says Tim. Young, well-maintained flax plants are more difficult to ignite than older plants, which tend to have more straggly, dead leaves at their base.

There are many factors which lower a plant’s flammability level. These include:

• the stage the plant is in its life cycle;
• how much dead material is trapped or retained in its structure;
• the moisture content of its leaves;
• the presence of volatile oils;
• if the plant is stressed by drought.

Publicity around low flammability plants doesn’t seem to have made a significant impact on people affected by the Tasman fire.

Oliver Dean, a director of Dean’s Nursery on the outskirts of Richmond in Tasman, says his customers just wanted the landscape ‘greened up’ with trees and shrubs as quickly as possible.

“In many instances, they’re not fussed about the plants being fire-resistant,” he says. “They just want quick, tough shelter. They want it looking green again.”

Some people were more conscious about what they were planting, he says, but they still wanted manuka and kanuka. For many, the stronger imperative is resistance to drought. Landowners are taking note of the changes in climate and looking for plants which will withstand a long, dry spell like the one they experienced in summer 2019.

Tim Le Gros, from Titoki Nursery in Brightwater, is also aware of the plants which have been identified and discussed since the fires. “We have had some inquiries from the public wanting to plant fire retardant species nearer to housing. However, on a large revegetation scale, it’s important not to skew the natural forest composition by completely leaving out (more flammable) species such as manuka and kanuka. They’re important species in the ecosystem.”

Tim Curran agrees. “There will always be a place in restoration for flammable species like manuka and kanuka. It’s just that we should be careful about where in the landscape we plant them to minimise the fire hazard.”

Fire is less likely to travel horizontally through well-maintained flax with spaces, preferably soil, between each plant. Plants which help a fire track upwards into the canopy of trees are classed as ‘ladder fuels’ and can start a crown fire, which is more severe. “There are a whole host of decisions to be made when planting,” says Tim. “We just ask that flammability is one. We aren’t telling people what to plant; we’re just providing the information, and they can make a decision based on it.”

Ian Reade is the principal rural fire officer for Fire & Emergency NZ in the Tasman-Nelson region. His team, including volunteers, are encouraging rural people to think about how they can protect their properties from a big fire. Ian was on the frontline fighting the Redwood and Pigeon Valley fires and says they were a huge wake-up call for many people.

“We are entering a new era. Climate change is very much part of our planning and is one of the principles behind what we are doing now.”

Australian and US forests need fire to regenerate and trigger new growth. New Zealand forests and bush don’t, says Ian. Americans and Australians are also brought up to be more prepared in their fire-prone environments. That’s a rare attitude in this country, says Ian.

“People are more vulnerable because they’ve never been in this situation before.”

Ian wants people to build resilient communities. These are where landowners carry out planting and landscaping with fires in mind, and routinely practice good housekeeping to keep their properties safe.

In the US, homeowners in high fire zones have had some success slowing fire down using plants with high water content. Options include aloes, agaves, aeoniums, elephant bush (Portulacaria afra), and jade plants. However, care needs to be taken to avoid introducing potential weeds to an area.

More stories you might like:
The Kiwi connection at Wardington Manor: How Bridget Elworthy and Henrietta Courtauld are revolutionizing cut flowers in Britain

The least flammable plants (in ascending order) from Tim Curran’s study are:

The most flammable (in descending order):

THE NUMBER ONE THREAT TO YOUR BLOCK

Most people think of flames roaring up to their home to destroy it, but that’s not the biggest danger, says Fire & Emergency NZ’s Ian Reade. It’s little dancing embers, blowing on the wind, which can travel long distances from the leading bank of flames.

“The greatest risk is that those embers find a pile of dried leaves, fall into bark gardens or dried grass, and ignite.” 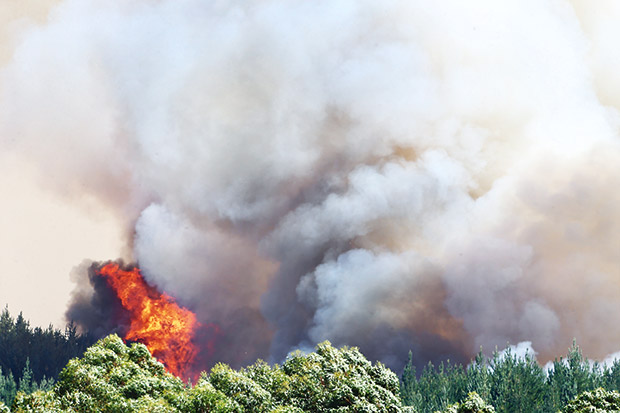 Most people think of flames roaring up to their home… but the greatest risk is from embers, which can fly up to 2km from the main flames.

The Pigeon Valley fire is a good example. Embers caused fires to start up to 500m away from the main fire, but they can travel up to 2km.

Both Ian and Tim Curran talk about ‘fine’ material which lies around, providing the perfect fuel for a spark or a small flame. ‘Fines’ include:

• small leaves such as dried manuka or kanuka;
• dead ‘litter’ found in gorse bushes;
• grass clippings which have dried out;
• dead leaves in guttering;
• dead grass which lies under the greener surface grass of lawns and pasture.

‘Litter’ is the dry matter which gathers at the base of plants or gets caught up in branches and twigs. Gorse is a prime example. Its foliage often dries out or dies off and stays in the bush, acting like kindling. One spark and it can combust, quickly leading to a hot fire.

Clearing litter from gorse bushes isn’t practical but ‘grooming’ the plants on the perimeter and in the yard area close to a house is. Rural houses generally catch fire one of two ways, says Ian Reade:

• embers fall on the fine material in gutters, at the back door, or in a bark garden running below the eaves, or;
• embers get blown under a house and ignite wood or other material stored in what is usually a warm and dry place.

Either way, there’s little chance of stopping a fire which starts this way. The aftermath of the fire in Pigeon Valley.

Ian says that’s why it’s crucial to avoid having fuel sources close to your home that embers could ignite. Flammable material should be removed daily during the October to April fire season, particularly if the surrounding land is becoming dry and the local fire danger sign is yellow or above.

“Regular maintenance of fuels on your property and strategic planting of low flammability species has been shown to improve the likelihood of a house surviving a fire.”