Why borage is the star of the edible garden 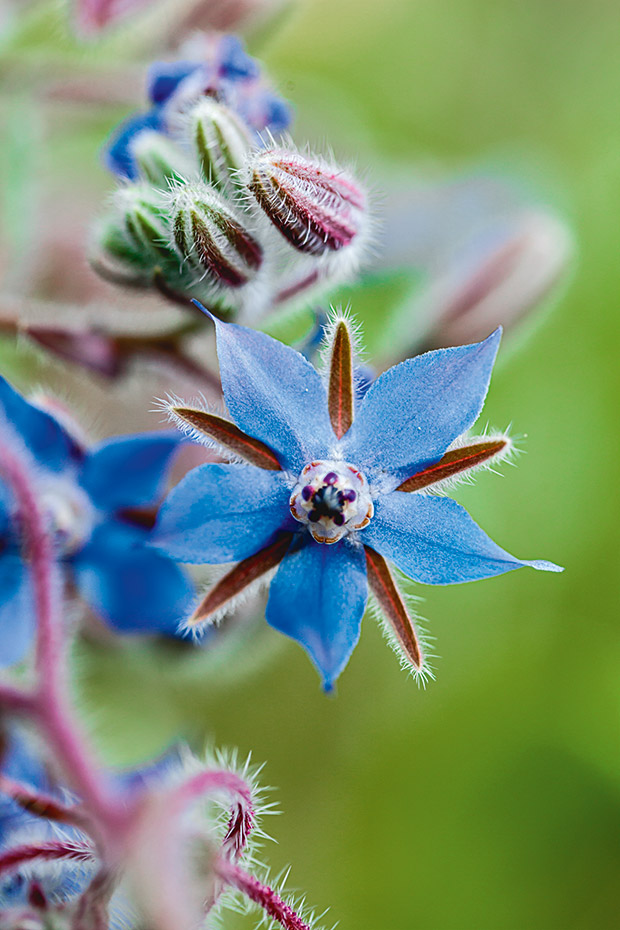 This sweet herb – sometimes maligned as an invasive weed – deserves a second look, and with it you get a bee guarantee.

It’s a photographer’s delight, a treasure chest of health, and a delightful summer culinary garnish with a cucumber-cool freshness. The ancients thought that nature had no finer blue than borage flowers. It was so beautiful the colour was often chosen to paint the Madonna’s robes.

The blue flowers were embroidered on fine medieval tapestries and included on the page borders of herbals. Close up, borage’s flowers are bright blue – sometimes white or pink – and star-shaped (its alternate name is starflower). They are beautifully offset by a central cone of prominent black anthers, sometimes described as the flower’s beauty spot. The whole flower is covered in white bristles, which hold the dew so they look delightfully frosted, like icing sugar. The flowers open singly over a long period.

The bees love borage most of all. There is probably no flower in the garden more attractive to them and they will travel far and wide for it. The flowers are a nectar honey-pot. If you want bees in your garden, this is the plant to bring them in.

There is a reason borage is a bee magnet – it needs bees to set seed. The flowers contain male and female parts but do not self-fertilise so more than one plant is needed for cross pollination and seed set. After fertilisation, four brownish-black seeds form in a dry fruit sometimes called a nutlet. These fall to the ground where, to the dismay of some gardeners, every seed germinates.

But that’s what so good about borage, making it a bee guarantee. I always allow a few seedlings to flower under my fruit trees and next to vegetables that need pollinating.

WHY YOU DON’T NEED TO GROW BORAGE

Most gardeners would agree borage grows itself, and self-sown seed seems to come up better than bought seed. Be warned: once you have it, borage will stay forever. If you are not keen on spontaneous seedlings popping up here and there, then borage is probably not for you. Borage is an annual. It likes a well-drained, rather sandy soil but will tolerate a wide range of soils. It flourishes in loose, rich, limey ground in full sun.

• sow 1cm deep, thin to 45cm apart, and then 60cm as plants grow. The leaves are large, wrinkled and oval, with pointed tips, and the stems are hollow and branched. Both become covered with bristly hairs, which can be quite irritating. Plants will branch and grow to 60-100cm and can become quite straggly. Flowering can be prolonged by removing old branches.
• Plants are tap-rooted and don’t transplant well, unless they are small with a ball of soil attached.
• if you got carried away and now have a borage forest – welcome to the club – you’ll be relieved to know it is an excellent mulch, compost additive, and chook food. Pull the plants and either lay them in the garden to decompose or toss in the compost heap. Borage breaks down easily and releases all those great nutrients. You can also feed it to your chooks as an edible green.

THE HERB OF COURAGE

Read any historical description of borage and there’s almost always a reference to its ability ‘to exhilarate and make the mind glad’ and ‘to drive away all sadness’ Ancient writers believed borage was the nepenthe (a kind of antidepressant) of Homer given by the Queen of Egypt to Helen of Troy ‘to forget all sorrows’. 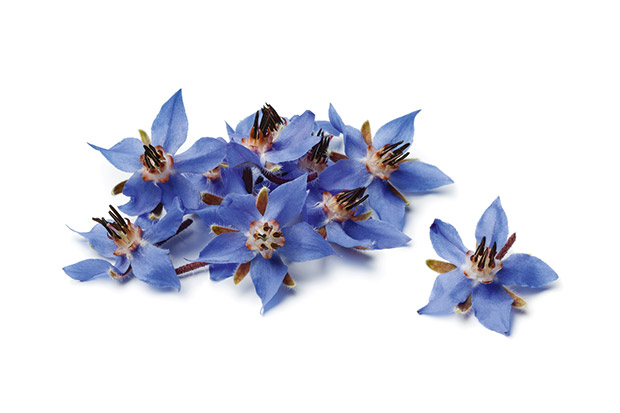 To bestow courage, borage flowers were floated in the stirrup cups of the Crusaders before their departure. It was suggested a bit of borage put into a promising man’s drink would give him the courage to propose.

Herbalist John Evelyn wrote in the 17th century that borage is ‘of known virtue to revive the hypochondriac and chear the hard student’. It’s not known where borage is native to, possibly the western Mediterranean or the Middle East. The name is thought to be of Arabic origins, meaning ‘father of roughness’, a reference to it coarse, rough leaves. Others suggest it is derived from the Celtic name ‘barrach’ meaning courage. The Welsh name, llawenlys, translates as ‘herb of gladness’.

It seems the Greeks and Romans were onto something with borage. It is a treasure chest of nutrition and medicinal benefits.

1. Fresh borage leaves are rich in Vitamin A, with some Vitamin C. They also contain some B vitamins, especially riboflavin.

2. They are also rich in potassium, magnesium, iron, manganese, and some calcium, combined with mineral acids.

4. The saline properties were thought to have wholesome, invigorating properties, making borage an excellent blood cleanser and tonic.

5. The stems and leaves contain saline mucilage, believed to promote kidney activity, and helpful for coughs and bronchitis.

6. The fresh leaf is a refrigerant – it lowers the temperature in the mouth – making it useful for reducing fevers. It is drunk as an infusion, a cupful at a time.

7. Externally it was used as a poultice for inflammatory swellings and bruises.

HOW TO USE THE FLOWERS

Pick fresh flowers and mist. Cover with plastic and refrigerate. When ready to use, gently remove the hairy sepals behind the flower. Hold the stem with your left hand. To remove, use your right hand to gently pinch the middle of the star and pull. The corolla (or fused petals) should separate intact. Flowers are especially delightful frozen in ice cubes for summer drinks.

Borage flowers are handy in the kitchen because they are such an eye-catching garnish. They were thought by old herbalists ‘to drive away sorrow and comfort the heart’ and they are indeed very cheery. They look gorgeous in drinks, salads, and even on cakes. Think borage lemonade, borage ice cubes, strawberry-borage cocktails, preserves and borage-jelly. Our great, great grandmothers would have preserved and candied them.

Young borage leaves have a mild, cooling, cucumber flavour and were a standard ingredient in cool tankards of wine and cider. In summer drinks, such as fruit juices, they add a refreshingly cool note. Whole sprigs can be steeped in lemon drinks, white or red wine, cider, punches and claret cups.

HOW TO USE THE PLANT

You can eat the leaves and stems of borage while the plant is young, before the flowers form, but older leaves are tougher and develop prickly, unpalatable hairs. Very young leaves are refreshing in salads, mixed with other salad greens, chopped finely into soups and stews, or added at the end of stir-frying.

A combination of young, chopped borage leaves cooked with silverbeet or cabbage in a 1:3 ratio with a little water and a knob of butter is surprisingly pleasant. The slight cucumber flavour of borage improves the taste of the other vegetables.

WHAT THE RESEARCH SAYS ABOUT STARFLOWER OIL

Borage essential oil contains significant amounts (20-25%) of gamma linoleic acid, an omega 6 fatty acid also known as GLA. GLA has an important role in brain function, skin and hair growth, bone health, and regulating metabolism, and is converted in the body to an anti-inflammatory called prostaglandin E1 or PGE1. Research also demonstrates a strong anti-inflammatory effect on skin. Borage oil in skin creams on dry, damaged skin shows an ability to restore moisture and softness. Other studies show borage oil reducing the reactivity of heart and blood pressure to stress, and alleviating symptoms of PMT in some women. Borage has been found to reduce the growth of some types
of liver cancer. The oil is usually taken as a capsule but can also be applied topically.

Borage plant parts can contain pyrrolizidine alkaloids (PAs), natural toxins which could be toxic to the liver and cause disease. Use only preparations which are labelled hepatoxic PA-free. Pregnant and lactating women should avoid borage oil as there is insufficient evidence for its safety. This is a refreshing drink, delicious for garden parties on hot summer days. Note: Pimms is 25 per cent alcohol.

Pour the Pimms into a large jug, tip in the ice and top up with chilled fizzy lemonade or tonic water. Add in fruit and garnish with borage leaves and other edible flowers.