Most lifestyle blocks are small, but collectively they cover almost 900,000ha of NZ, and have an enormous impact on the environment. Here’s how good planning can transform your block and protect our environment.

When Christine and Tony Scurrah Whitton bought their first block, half an hour’s drive west of Nelson, they weren’t sure what to do with a boggy patch at the bottom of their property.

They hired environmental consultant Rob Fryer from FuturEcology, who advises on land and water use, to help them. “We went down there, and Rob said, ‘oh it’s a wetland, and it would have looked like this’,” says Christine.

Rob prepared a restoration plan, which they started working on in 2016.

“I knew nothing about natives,” says UK-born Christine. “We got a proposal from Rob for some straightforward riparian planting. We agreed he would do one side and give me a plant list to put on the other side. I bought the plants and worked on my side while Rob planted his. He showed me how to decide what to put where and how to plant them.”

The planning they started with Rob and have continued since has completely transformed their block and how they look at it. They’ve now planted more than 11,000 trees and propagate everything themselves. Tony says they’re known among their neighbours as “the people who never stop working”, but they love it.

THE NEW TREND FOR PLANNING

An FEP is designed to recognise and manage risks to the environment, including:

Most lifestyle blocks (depending on your regional council’s rules) won’t need an official FEP, but there are plenty of good reasons to create one that’s appropriate for your block. The Nelson City Council has led the way for block owners in the last couple of years. Its rohe (territory) is mostly rural – just 10% of its area is urban – and contains a large, growing number of lifestyle blocks. It came up with an innovative programme to help block owners learn about planning and taking care of the environment, which is now spreading nationwide.

HELPING BLOCK OWNERS TO PLAN AHEAD

Workshops to help block owners manage the environmental impact of their block started in 2021. They’re the result of an initiative started by the Nelson City Council. It wanted to encourage its vast numbers of block owners to look at their land as a key part of the environment, draw on expert advice, commit their understanding to paper, and then do the mahi (work).

Susan Moore-Lavo created the first workshops targeting block owners, who she says have a significant impact on the environment. “For example, E. coli levels are high in some of our waterways. When we tracked it, we found the source was mixed, but largely sheep and ducks. Many small landowners have stock but don’t understand the impact they collectively have on the environment.” 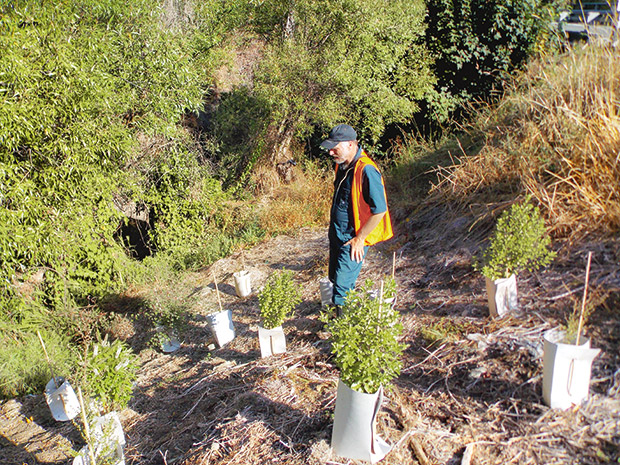 Rob Fryer of FuturEcology checks one year old riparian plantings near the Wakapuaka River in Nelson. The trees are protected by EmGuards developed by his daughter Emma. They’re made of a coated cardboard, providing protection from wind and pests, and naturally biodegrade in place after a year or two (when the plants no longer need a guard). Emma developed the product after seeing large numbers of plastic plant guards clogging waterways. Photo: FuturEcology.

Susan pulled together a team of local experts from the New Zealand Landcare Trust and farm environmental consulting companies FuturEcology and LandVision. They created a range of workshops aimed at encouraging block owners to plant key areas of their land, such as wetlands.

“At the same time, (the workshops) were an opportunity to also discuss issues like fencing and management of critical source areas (the origin of a pollutant, eg manure, sediment). That’s important, as water quality is a key priority for (the council).”

• land management, including how to map important features, tree planting, and weed control;
• how to identify and mitigate critical source areas (CSAs);
• grazing;
• fertiliser use;
• where to site infrastructure;
• fire control.

WHAT IS A CRITICAL SOURCE AREA (CSA)?

CSAs are landscape features such as gullies and depressions, where water ponds. They concentrate run-off, transporting nutrients, sediment, and bacteria (most often E. coli from manure) into drains, streams, and lakes. Good management protects these areas, especially during times of greatest risk, such as during wet winters. 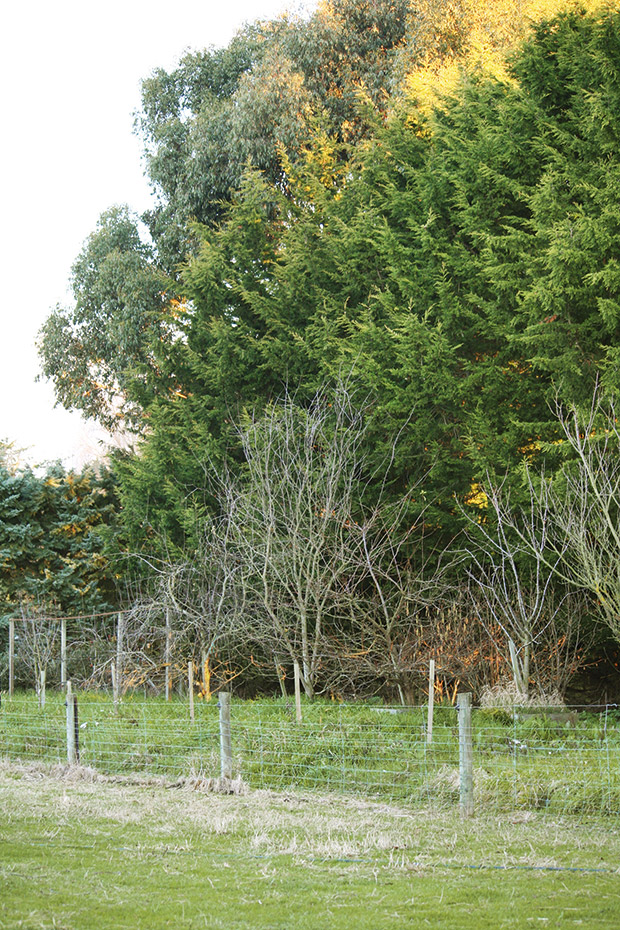 Finding the best site for a soakage field can be tricky, especially on a small block. This strip of land between a paddock and a hedge seemed ideal, keeping it safe from vehicles and livestock. Unfortunately, it also waterlogged the soil, eventually killing almost half the trees in an orchard planted alongside it.

Every lifestyle block has at least one significant potential point source for pollution: its wastewater system. Six other commonc CSAs on blocks include:

Note: you may be affected by (and need to mitigate) run-off from critical source areas on your neighbours’ land, as Christine and Tony discovered with run-off from a drain carrying water and silt from a neighbouring subdivision, into their block.

DOES YOUR BLOCK NEED A FARM ENVIRONMENTAL PLAN?

The legislation covering Farm Environment Plans applies to pastoral or arable farms over 20ha and horticulture operations over 5ha (or any combination that adds up to 20ha), so most lifestyle blocks won’t be affected by the Government’s new regulations. Exceptions include commercial avocado and kiwifruit orchards on small blocks in the Bay of Plenty, which could meet the horticulture threshold.

The requirement for Farm Environment Plans is in Part 9A of the Resource Management Amendment Act 2020. Regional councils have a statutory role in enforcing them and are prioritising specific high-risk catchments and activities.

The councils are still working on the details, and won’t finish for 12-18 months. Some may require a block owner to simply register their property rather than create a formal plan.

“But even if it’s not required, it’s good practice to have an environment plan,” says Nathan. “It’s not just big farms causing the problems – there are issues with small ones too. If we’re working across a catchment, we really need to know what’s happening on the small blocks as well.”

What the final regulations will be is making some large farmers nervous. Most already have existing farm plans, required by some industry bodies and regional councils, but it’s not yet known if these will also meet the new rules.

CREATE A MAP OF YOUR BLOCK’S FEATURES 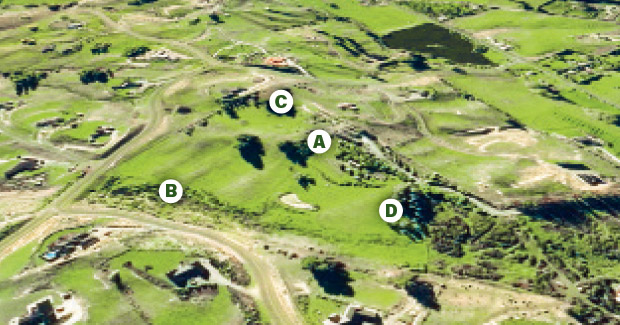 A farm plan needs a map, such as the 3-D aerial view (above) of the Scurrah Whitton’s block taken from Google Earth. It’s particularly useful because it’s higher resolution than Google Maps, and you can choose to show contouring.

B. The wetland, stretching right along the boundary, including a pond.

Tip: Use a LINZ map. Land Information NZ (LINZ) has high-resolution satellite maps of NZ online. The only issue is some imagery is 5-6 years old.

HOW TO CREATE A BASIC FARM PLAN

Planning starts with maps. The steps below roughly encompass what permaculture would call a base map, habitat map, and design.

1. Source an aerial map of your block. Use an image from Google Earth, Google Maps, LINZ (see above), or ask your council as it may have maps available online or by request.

3. Describe the environmental practices you use on your block. This includes: soil testing, fertiliser, cropping/grazing, use of chemicals, water use, waste disposal, predator and weed control, biodiversity protection/restorations.

Create a table of environmental improvements, an estimated timeline, costings, and (where appropriate) include them on the FEP map. Source: NZ Landcare Trust

4 TIPS FOR MANAGING YOUR SEPTIC TANK

1. Take care not to overload them by discharging too much water at once or letting unsuitable waste enter the system.

2. Be aware of the risk posed by tree roots penetrating the system or the soakage field.

3. Take care of your soakage field. Ideally, fence it off from stock, and don’t drive over it, as it’s the most likely part of your home wastewater system to fail.

4. How often a tank needs emptying depends on the type of system, its age, and the number of people using it. Some have filters to prevents solids from getting into the soakage area, which may need clearing. If a tank cracks, it needs replacing, urgently.

Read more: Your Septic System by the Gisborne District Council. This is a great guide to septic tank care, but compliance requirements may vary in your district or region.