Watch Bo the saddleback piglet that thinks it’s a dog

Who: Frances Richardson
What: 5ha (12.5 acres)
Where: Taupaki, 30 minutes west of Auckland

When you walk in Frances Richardson’s front door, you can’t see the pig. “Bo,” she calls. “Are you going to get out of bed?”

“Humpf.” The muffled grunt comes from what looks like a pile of blankets on the floor. Then a little snout appears, sniffing the air. Bo may or may not want to unwrap himself and say hello. 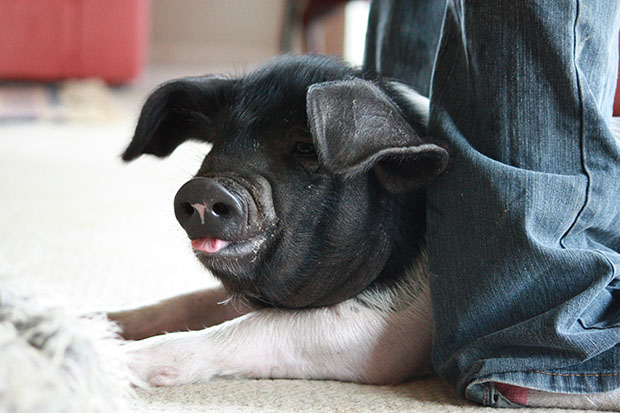 Bo is a saddleback piglet who was raised by hand and within a few days learnt ‘sit’ and ‘lie down’, something you can teach any pig using dog training techniques and treats.

Jack the dog wanders in and seven-week-old Bo decides that he will venture out and see what’s going on. Once he’s awake, he’s insistently bumping his small but very strong nose against your legs, like he would do to his mother.

She’s outside along with his 11 brothers and sisters and Frances’ other pigs, but Bo has the run of the house, having needed some one-on-one help as the runt of the litter. Nougie has just passed inspection by the NZ Kunekune Association.

You’d never know it by the way he’s nudging up against his human mum, before taking a lie down between her feet. When she moves away, Bo decides the NZ Lifestyle Block magazine camera gear is fair game, but Frances has an ace card in her pocket: dog treats.

“Bo, come here.” Jack the Lab comes over.
“Bobo, come here. Now sit.” Bo and Jack sit, and Bo happily munches loudly on his treat while Jack looks on hopefully. It’s taken just one week for Bo to work out the commands Fran uses for her dogs. 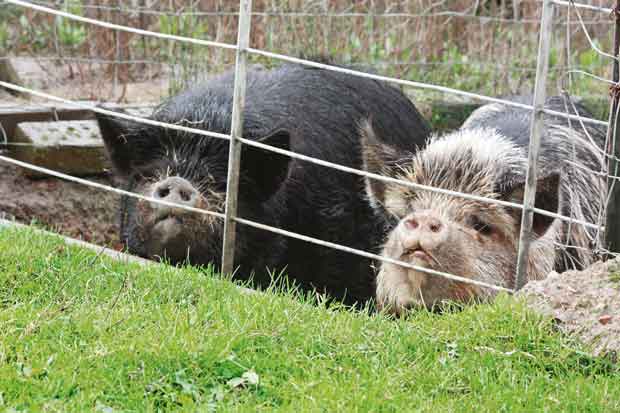 The little saddleback pig will soon be heading outside to join the rest of the pigs dotted about the hillside. Frances breeds the saddleback pigs for meat, selling the piglets for $70 or so once they’re weaned. Her kunekunes are pets, and she still has her first one, a gift when she and her husband moved out to their block as complete beginners to farm life eight years ago.

“Porky, you’ve got hay all over your nose! This is Simmy and Porky, Simmy is the eldest and she’s the reason I got into pigs. We got given her the very first Christmas we moved here and this is her daughter, Porky.”

There’s nothing edible about these particular pigs, despite the name.
“Kunes are very slow growers and they can be very fatty, and that’s why people don’t eat them… although you can eat them, there’s no reason why you can’t.” 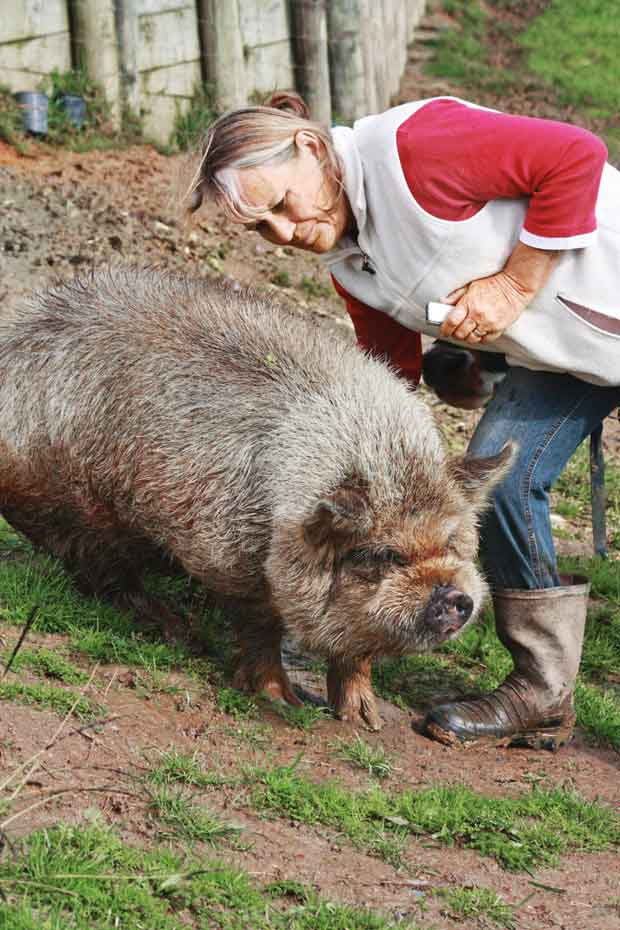 Frances with Nougie the boar.

Roaming around the garden you come across some of her pet sheep, snoozing under a conifer tree, and then there’s the squealing and squelching of 17 saddleback piglets who come streaming out from behind raised garden beds to demand food.

“That’s my vege patch,” says Frances. “It has been turned over!”
We walk past two of the most glamorous Sebastopol geese, all feathers and bustle as they move out of the way, their frilly feathers swaying like tulle and lace as they waddle. Ahead is a paddock with Daisy the heifer and Frances’ newest kunekune boar, Nougie. He has just passed muster by experts with the NZ Kunekune Association.

“They are trying to get people to register their kunekunes so they can keep the genetic breeding line pure, therefore if you buy a kunekune and it’s registered then it’s a good one. There are a lot out there that are crosses.” 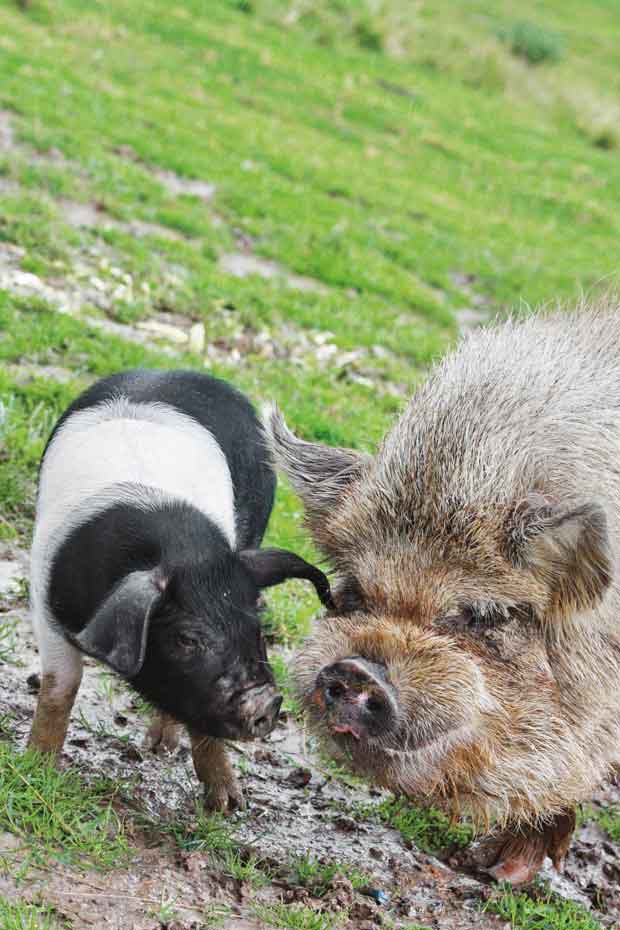 Nougie ticks all the boxes for a good kunekune: short legged, turned-up nose, a square body, not too long. Because he’s still young, he has yet to fully develop his tusks or the thickening over his shoulders, but Frances is pleased with him.
“I want to keep him, he’s beautifully natured, if you rub his tummy he falls over.”
However, Frances isn’t breeding kunekune at the moment as she’s found it a little diffi cult to sell piglets that people see as pets, not pork. That leads to pigs needing to be rehomed.
“I think some people underestimate that they will grow, or they get them and then they’ve got to move and can’t take them.”

She picks up bins of vegetable waste for her pigs – “everyone shares it,” she says, pointing at the chickens, duck, geese and sheep – and one of her pigs is out working.

“She’s at a friend’s house, digging up her vege patch. She didn’t want to use chemicals so she’s using my pig, she’s been there for about three months now so she’s coming home soon. It’s all kikuyu but pigs like that.” For more on pigs and kunekunes see the July issue of NZ Lifestyle Block, on sale now