Passers-by can’t help but smile as they spot the wacky, oversized and oh-so-wonderful town statues erected around the country.

It is generally agreed that any town in Aotearoa, no matter how small, can rightly claim to be its own capital of the world. Have an excellent river for fishing? Slap a giant trout sculpture in the town centre. Produce most of the country’s carrots? Erect an oversized fibreglass vegetable.

Some towns have even gone so far as to rebrand themselves, anchoring their identity on a quirky symbol that comes alive with themed festivals, business names and, of course, a giant novelty statue.

If there’s one great thing about cruising through the hamlets that dot the country, it’s keeping an eye out for these oversized, quintessentially Kiwiana sculptures. Luckily, due to their larger-than-life presence, most of New Zealand’s big things can’t be missed.

Fictional Taihape farmer Fred Dagg, immortalized by comedian John Clarke, waxed lyrical about the humble rubber boot in his memorable tune The Gumboot Song. The town of Taihape capitalized on its moment of fame by building a patchwork-coloured gumboot (made of corrugated iron) along SH1.

It was the 1980s, and Taihape had suffered from job losses and a declining population since its railway heyday in the 1950s and 1960s. Locals anticipated that being the world’s gumboot capital would entice motorists to stop and explore their little town. Since then, Taihape has challenged visitors to put their gumboot-chucking skills to the test at its annual gumboot festival held every March.

Locals turned to carrots in this Ruapehu town in the early 20th century. In the 1920s, the success of sawmills in the area resulted in the fertile volcanic land becoming overrun with tree stumps. When a few Chinese families struck a deal with landowners to help clear the land, the seed for the town’s bountiful market-garden industry was sown.

More stories you might like:
Walking Wellington: Take in the sights and senses of the nation's capital, feet-first In the 1980s, a 7.5-metre-tall carrot was created as a prop for a bank advertisement and later donated to Ōhakune. It was given a permanent perch at the town’s roadside entrance in 1984.

The now-beloved statue is rumoured to be the world’s largest carrot. It’s a fitting symbol for the root-vegetable barons of Ōhakune — the wider region is responsible for approximately two-thirds of the carrot crop in the North Island.

Paeroa’s lemony fizzy drink L&P was created in 1907, but it wouldn’t be another 50 years until the beverage was memorialized as one of New Zealand’s first “big thing” statues. The original L&P bottle, built in 1968, was inspired by a seven-metre-tall rocket created the year before for a Christmas promotion. (It was deemed a traffic hazard and soon dismantled.) 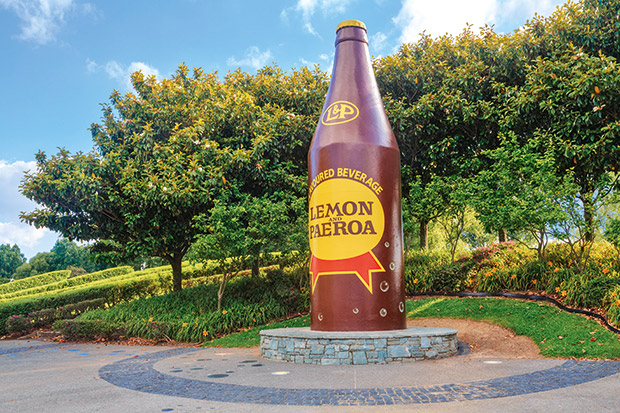 A slightly smaller statue was constructed in its current location in 1969 by the Paeroa Borough Council and the company, Innes Tartan (then the owners of the Paeroa mineral water spring). It remains one of the most huggable and world-famous statues in New Zealand.

If ever one finds themselves wandering through Central Otago on a cloudless night looking for a sign to where they might be, they should only hope to run into this quartet of enormous fruit sculptures. For stumbling upon an oversized apple, pear, peach and apricot can only mean one thing — you’re in the middle of Cromwell. The 1.7-tonne landmark, built by the Cromwell Rotary Club to symbolize the many fruit orchards in the area, was installed in 1990.

In 2007, Springfield was gifted a bubblegum-pink doughnut sculpture by 20th Century Studios to celebrate the release of The Simpsons Movie and acknowledge the sharing of names between the cartoon Springfield (the main town in the television series) and the real-life Springfield. 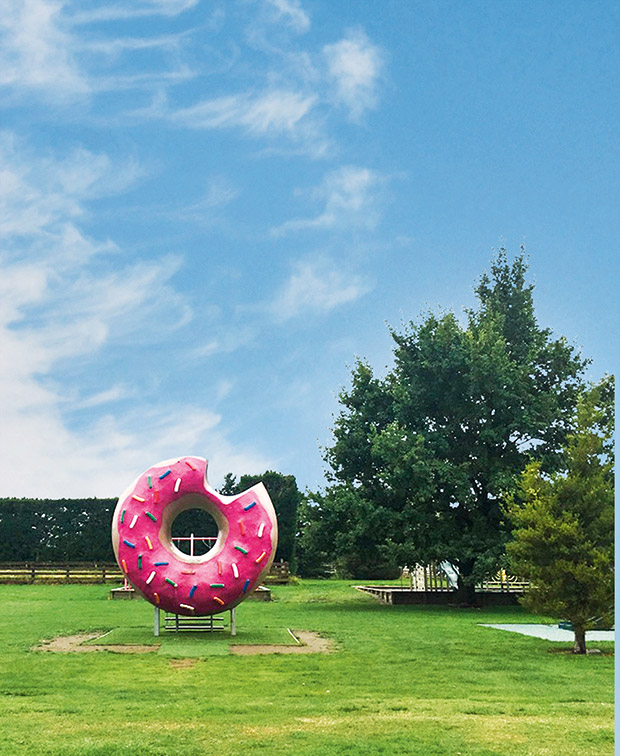 The six-tonne landmark, a depiction of one of Homer Simpson’s favourite foods, was damaged in 2009 in a suspected arson attack. It was replaced with a new fireproof doughnut in 2012, much to the delight of some locals who feel the pink iced delight puts their town on the map.

When a local board member suggested “Dale” the spider on Auckland’s Great North Road be replaced with a new suburb mascot, the community took matters into their own hands. “Save Dale” badges were created and worn with pride. 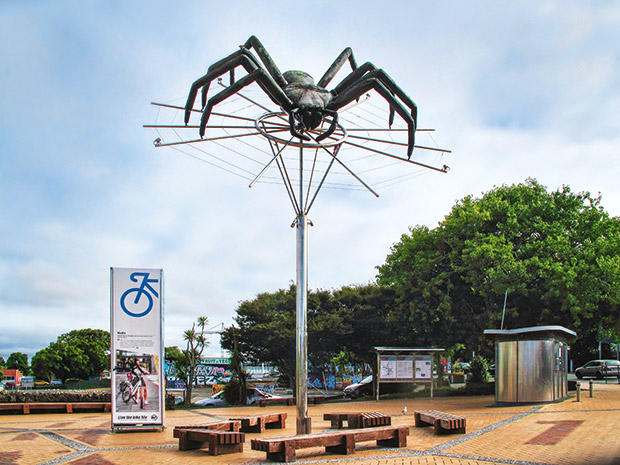 The three-metre-long spider statue pays homage to the huntsman spider inadvertently imported to Avondale from Australia on wattle tree bark in the 1920s. The species, now known as the avondale spider, is still rarely found outside the West Auckland suburb.

The Bay of Plenty town, responsible for much of the country’s kiwifruit production, calls itself the world capital of kiwifruit. Even without the giant kiwifruit slice at the town’s western entrance, few can ignore the orchards sprawled around the outskirts of town and beyond. The town landmark has stood for more than 30 years — though it did get a new slick of paint in 2010.

This small town near Palmerston North has fully embraced its name, with most businesses devising a riff from it. Puns are aplenty, and some are very clever indeed, such as the Read-a-bull library, the Const-a-bull police station, the Befriend-a-bull social club. Even the local real estate agent is in on the gig with List-a-bull, as is the RSA with Respect-a-bull. The milk-pail-shaped rubbish bins call for Response-a-bull action. If that wasn’t enough, there are also bull statues scattered throughout the town, including a bull sculpture of an un-believe-a-bull size.

Gore isn’t particularly subtle about showing its merits. There is a collection of statuesque representations to be found in the town, including a stoic romney sheep for the farming heritage, a colossal guitar for the Gold Guitars, and a gasping brown trout that could swallow an angler or two whole should it leap into life. 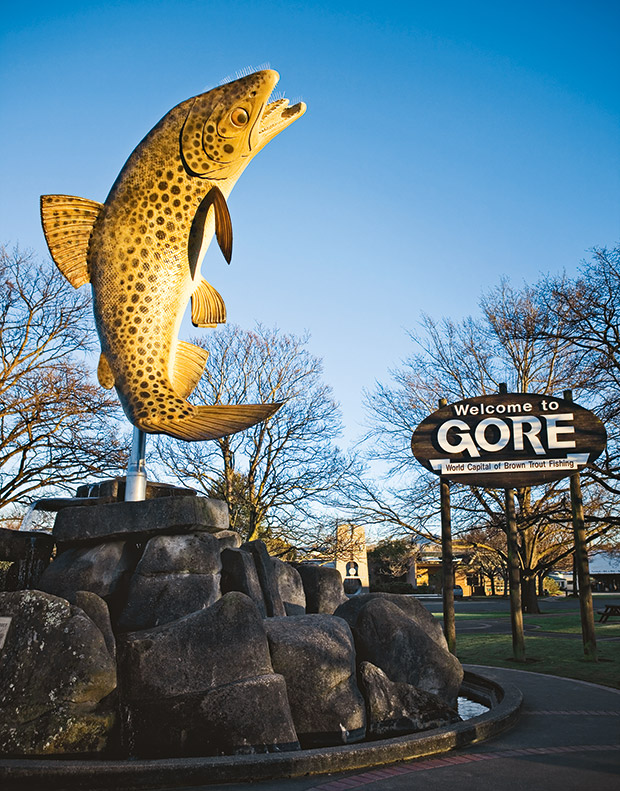 Gore, located near one of New Zealand’s most famous fishing rivers, the Mataura River, can easily back up its “world’s capital for brown trout fishing” title.

This small town in the King Country is proudly the home of one of New Zealand’s top competitive shearers of all time, Sir David Fagan. The legendary sportsman has won the Golden Shears 16 times and set 10 world shearing records to date. 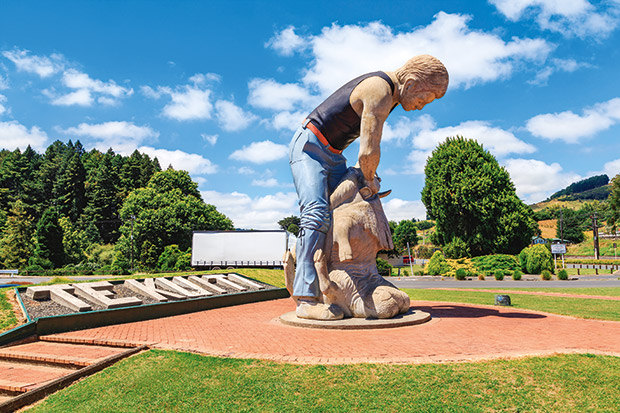 For a town once known for being not much more than a peaceful pit stop in the Waikato, Tīrau has dramatically changed its image over the past two decades. Mention Tīrau to a Kiwi, and they might look puzzled for a moment, then cry “corrugated iron sheep”. 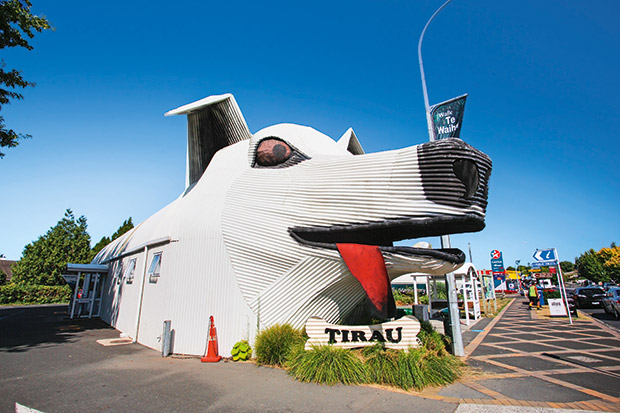 Much credit can be bestowed on Henry Clothier, who kick-started the town’s revival when he opened an antiques store in 1989. Henry’s son Steven is the iron mastermind, the tin man of Tīrau, whose handy work is impossible to ignore. He’s responsible for the mammoth sheepdog that houses the public loos and the amorous-looking ram with an eye on the famous sheep.