Expedition Earth: Meet the New Zealand couple finding love on a 350,000km roadtrip around the planet


A shared passion for four-wheel traveling has this New Zealand couple chasing all seven continents.

Most new couples agree to split the bill after a few dates. Bridget Thackwray and Topher (short for Christopher) Richwhite are not most couples. After just a few dates, they agreed to share a three-year journey around the world.

The plan for a 350,000-kilometre road trip was hastily scribbled down a few months later. 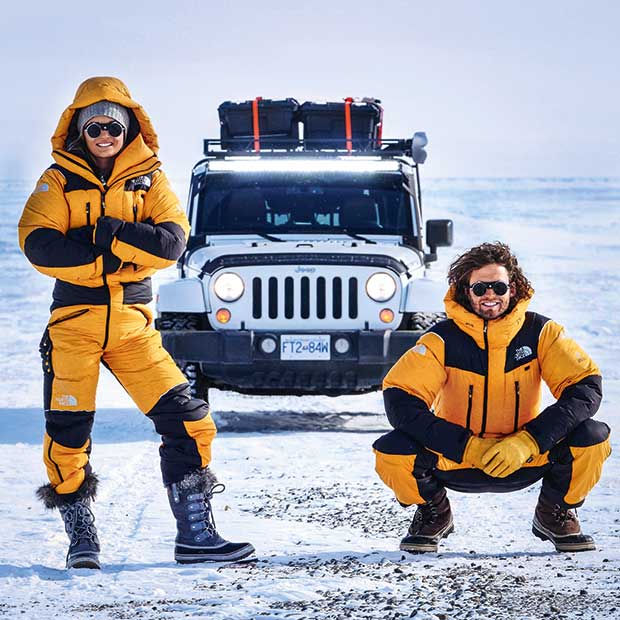 Topher and Bridget selected one of the coldest corners of the earth — Alaska — to kick off their journey.

“We defaced a world map with coloured pens, naively planning our route through all seven continents,” says Bridget. “We wanted one that took us on the biggest adventure, through the most extreme temperatures and to unique landscapes.”

The couple, she from Kerikeri and he from Auckland, packed high-quality DSLR cameras and Topher’s drone, and even trademarked the terrestrial mission with an Instagram-worthy name: they called it Expedition Earth. 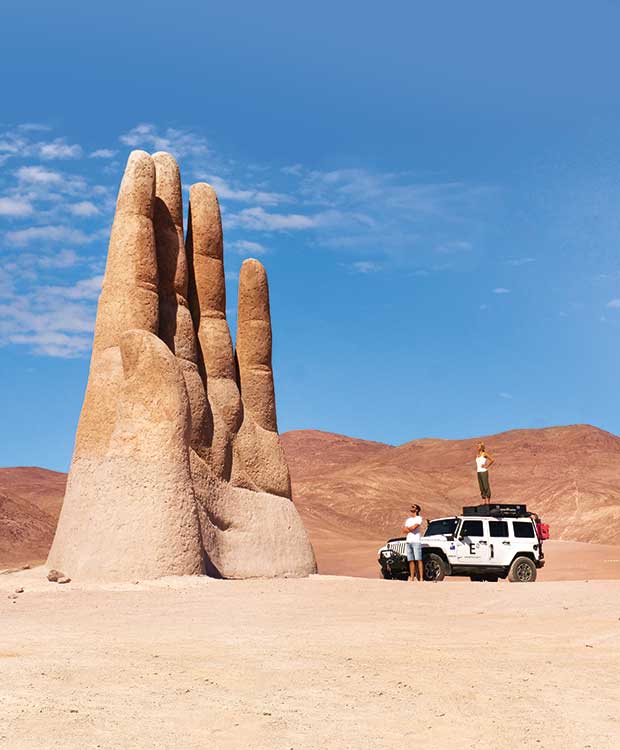 A large-scale hand sculpture (Mano Del Desierto or Hand of the Desert) pokes up from the sandy rubble of Chile’s Atacama Desert.

It’s been one year since Bridget and Topher’s initial scribbles turned into a reality, with the pair swapping New Zealand sunshine for minus-30 degrees Celsius in Alaska’s Arctic Circle in April last year.

They drove north to south to complete leg one of the trip — traipsing through North American tumbleweed, swimming with turtles in the Galapagos, penguin-spotting in Antarctica and parting with their Jeep (named Gunther) for a month as it voyaged from Buenos Aires to Cape Town on a trans-Atlantic cargo ship. Topher realized only after filming Bridget’s mid-afternoon swim that this turquoise sinkhole in Valladolid, Mexico, was once used for human sacrifice.

Social media doesn’t reveal too many inconveniences, though Bridget and Topher will be the first to admit that hiccups, humorous or not, do exist.

Daily chores are exacerbated by tight quarters and regular visits to border control, and are often sandwiched between hours of driving (up to 12 hours, depending on the scenery) and shooting content for the website in the mornings and afternoons. 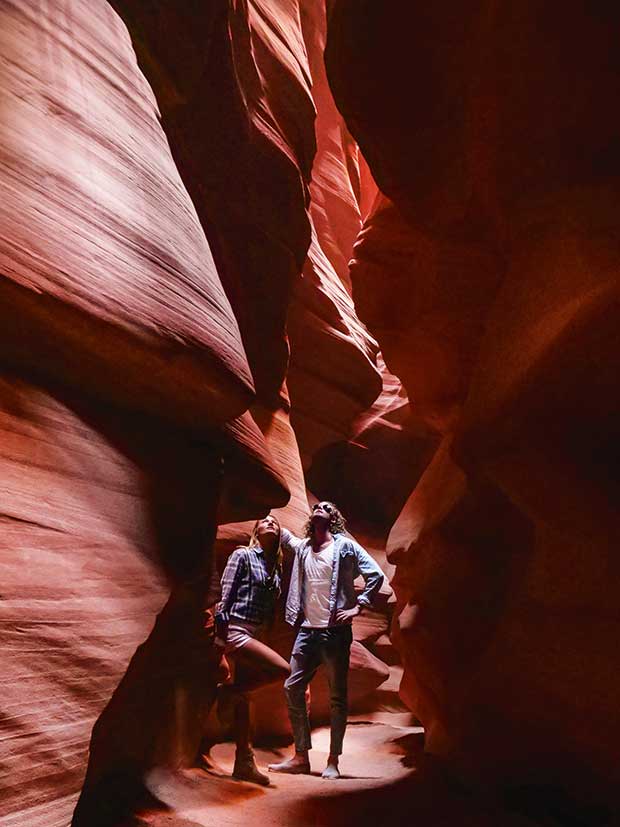 Extra petrol, snack rations and visitor visas are a recurring norm, while political and cultural volatilities are sometimes inevitable. Earlier in the year, Bridget and Topher found themselves driving through Mexico on election day and once blindly entered a gun-friendly protest in rural Ecuador.

More stories you might like:
The land before time: A road trip through the Chatham Islands in the new Holden SUV range

A month into the trip an argument reached a boiling point when Bridget drove “past” a pothole that Topher maintains she drove “into”. While no conclusive outcome was reached, further bickering is avoided by steering clear of “potholes” — a term used to refer to unproductive arguments. 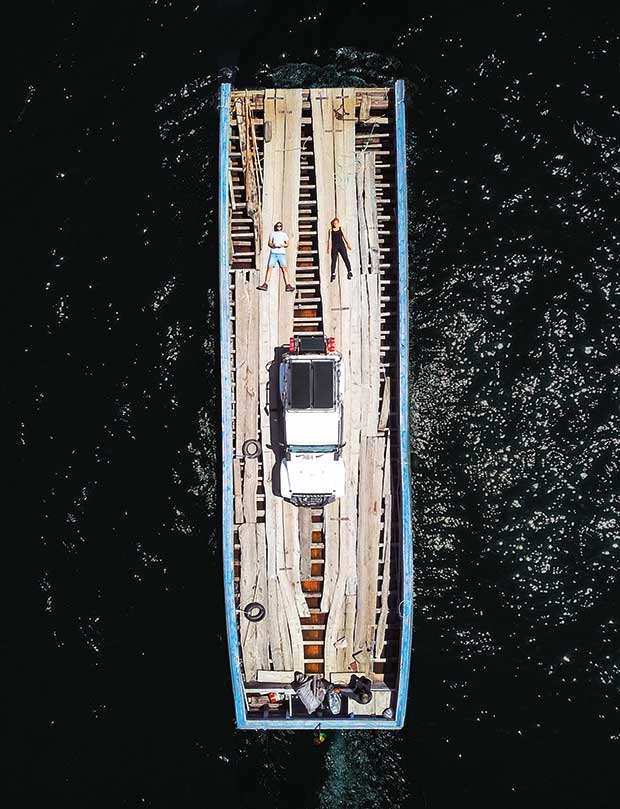 The third member of the family, Gunther (their car) joins Topher and Bridget on a ferry crossing from Peru to Bolivia on Lake Titicaca, the world’s highest navigable body of water.

“Since then, it’s been a pretty smooth ride. The expression ‘joined at the hip’ now both defines and describes our relationship,” says Bridget, noting they are only ever a foot away from each other at any one moment. Snacks help mediate, too — she credits nut bars, chocolate, and dried fruit as cheap peacekeepers when the mood turns prickly.

Perhaps it’s these anecdotes, showing the mundane in the otherwise extraordinary, that attracts thousands of followers to their Instagram feed. Or perhaps, like Bridget and Topher, these followers dream of traveling the world by car. 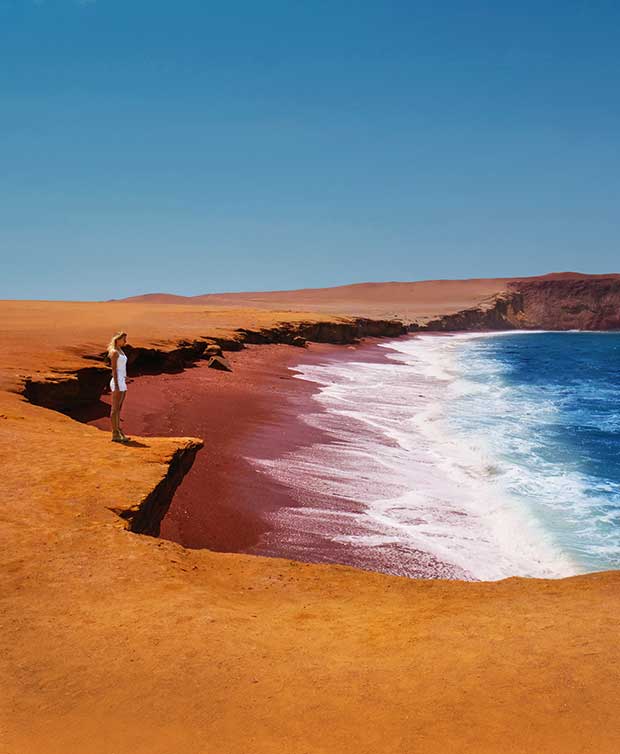 Bridget looks to the horizon from the contrasting red slopes of Playa Roja (Spanish for Red Beach) in Peru — the result of the erosion of pink granodiorite rock.

“Your posts always open my eyes to how big this world really is,” writes one follower.

Since the duo took their inaugural Instagram image dressed in padded yellow jumpsuits along Alaska’s northernmost (car-accessible) point, their feed has raked in a hefty following and even earned them a type of celebrity status. 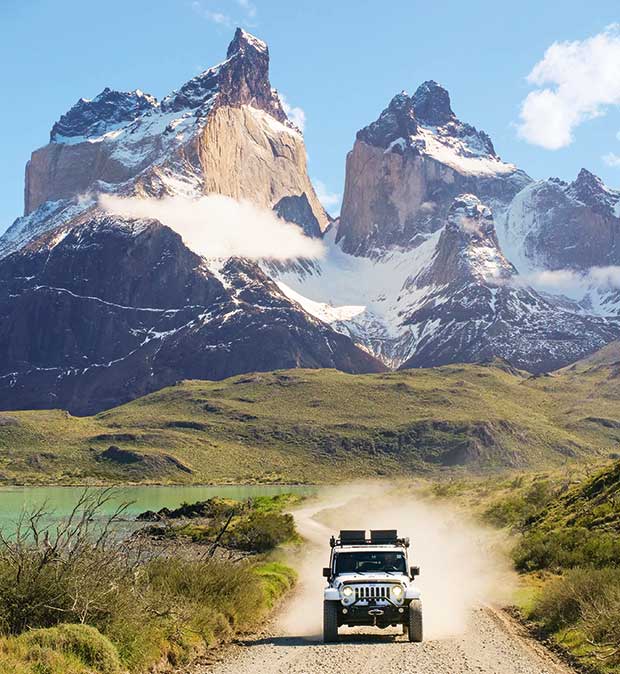 Torres del Paine National Park in Chile’s Patagonia region. Bridget and Topher aim to drive at least five hours a day. When the landscapes are less scenic, they push the time at the wheel to 12 hours.

“Once or twice a week we get people coming up to us to tell us they follow our journey, or have read about the expedition,” says Bridget. “It happens in some very remote parts of the world as well — last week in the middle of Etosha, Namibia.”

Now with nearly 200,000 followers, Bridget and Topher offer more than road-trip inspiration. The pair have teamed up with World Wildlife Fund and National Geographic and add subtle environmental messages to their snaps and panoramic videos. 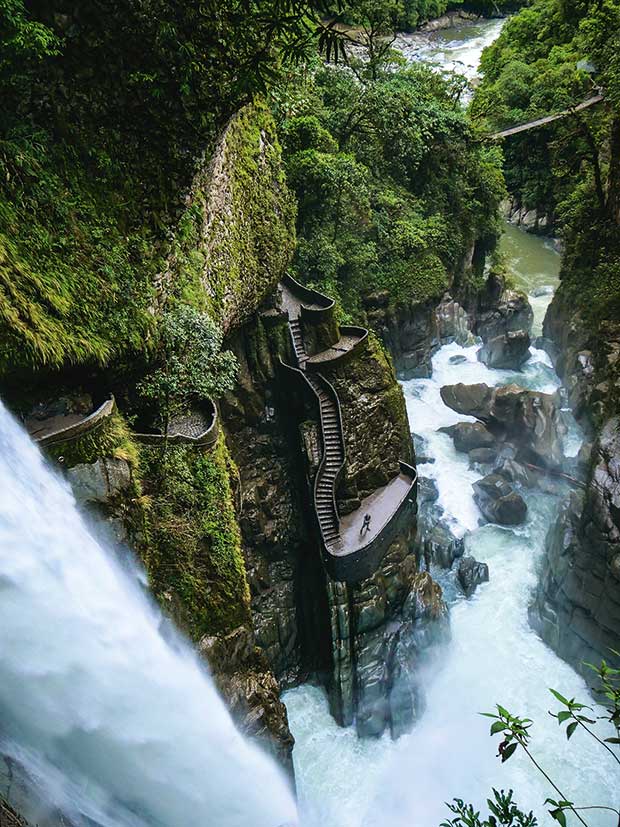 “We’ve found a much bigger purpose beyond our initial romantic ideas,” says Bridget. “We now explore the planet to share and showcase its delicate natural beauty and expose the environmental fragilities the Earth faces.”

Seeing a montage of cultures and landscapes is one thing, says Bridget, but witnessing humans spread themselves so far and wide is another. Earth’s most remote corners are visited rarely, so Bridget and Topher use their cameras to magnify these nooks and crannies, hoping to set the record straight. 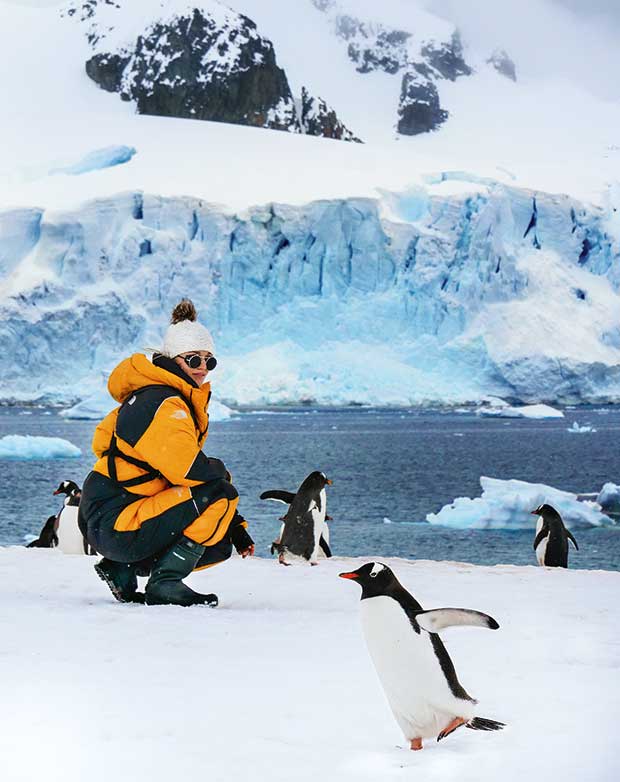 The couple revisit their canary yellow onesies in Antarctica among penguins.

Now, Expedition Earth aims to spread awareness of overpopulation and draw attention to the need to develop land with sustainable, ethical intentions.

“Environmental issues, like plastic pollution and deforestation, are all directly linked to the number of humans on the planet. We are surprised that there is such little effort in raising awareness around birthrates,” she says.

Coming from New Zealand, where single-use plastic bags are on the brink of extinction, and reusable beeswax wraps are seemingly everywhere, Bridget and Topher assumed plastic pollution would be worse in poorer countries. Instead, they’ve found the opposite. 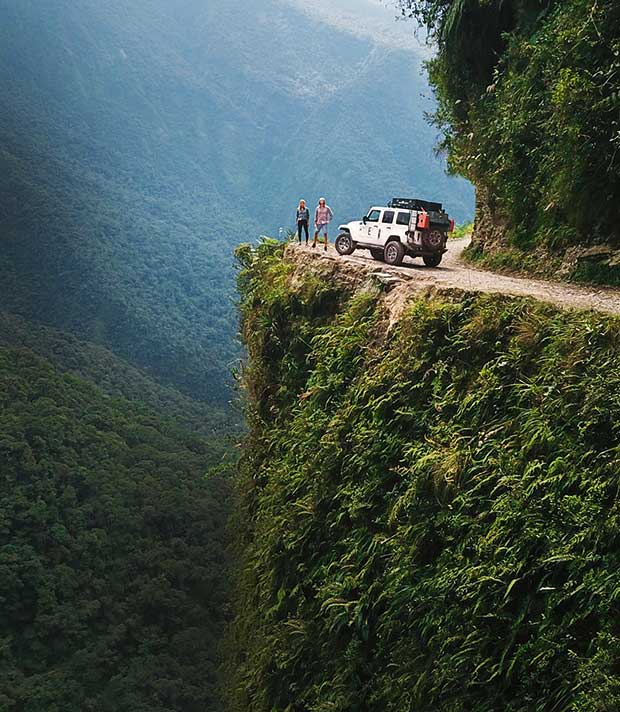 North Yungas Road in Bolivia is better known as Death Road for its 600-metre cliffs, cut into the mountainous terrain by Paraguayan war prisoners in the 1930s.

“Most countries are prioritizing environmental wellbeing to protect their tourism economies,” says Bridget. “For example, people in Central American coastal towns are now refusing to serve plastic straws or plastic bags. Local communities are now looking after their cosmetic image. The Americas are heading in a positive direction.”

More stories you might like:
Building a beautiful nest home (plus how to live through a renovation project)

“It is a journey of self- and environmental discovery. We hope our findings will continue to educate and inspire others to fix, protect and celebrate the natural world in which we live.”

Both Topher and Bridget had both done a fair share of traveling before meeting in Queenstown — 33-year-old Topher had lived in Switzerland and London, working as a musician, where his rock band Lonsdale Boys Club scored a deal with Island Records. With a taste for entrepreneurship, he later launched Auckland bar, Pineapple. 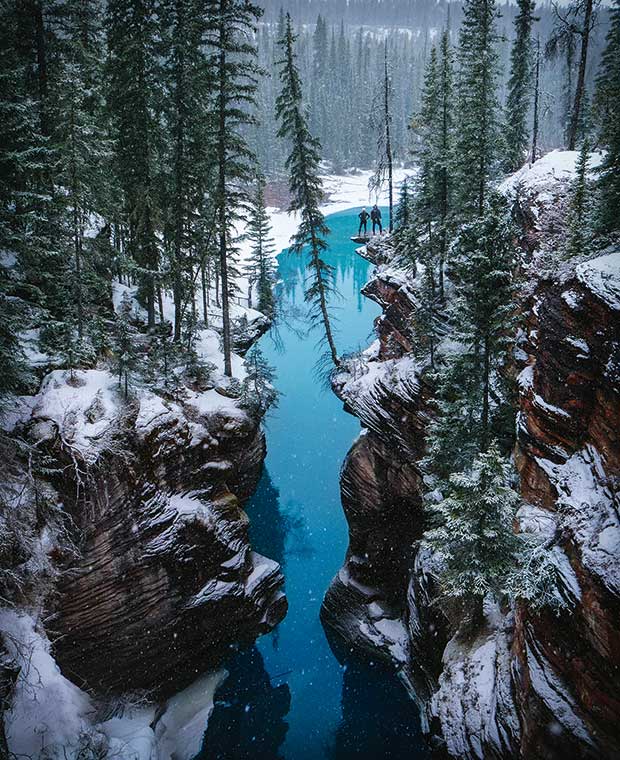 Glaciers and peacock-shaded water define Canada’s Jasper National Park, a natural playground for those seeking a taste of the Rockies.

Meanwhile Bridget, who is now 25, had visited nearly 60 countries and briefly lived in London where she remotely ran a website design business (launched when she was 15), and later, the buy/sell fashion website, Fashbae.

Their journey together is far from done.

With more than a year to go, the pair will continue to globetrot in a zig-zag, north from South Africa through the Middle East to the Russia-Finland border. They will then drive south from Russia until they return to New Zealand, visiting 70 countries by late 2020. 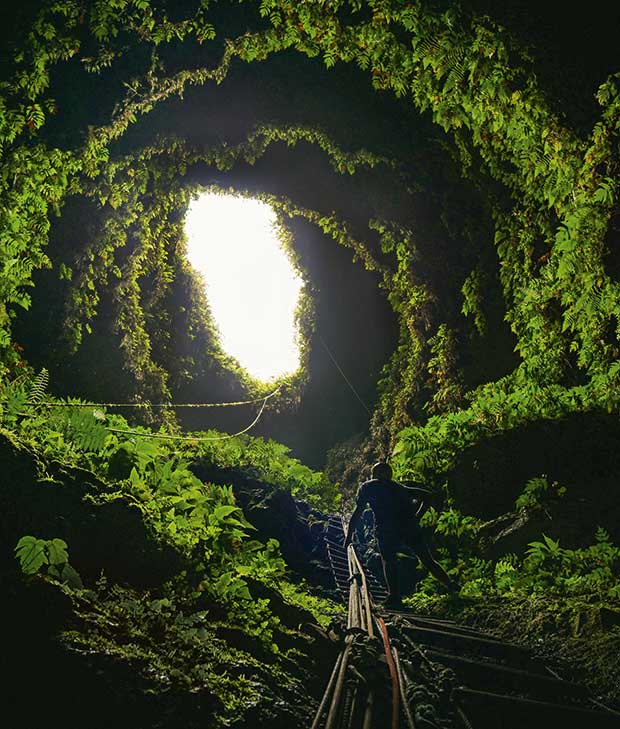 The Galapagos Islands is known for its flora and fauna and — even underground — lush greenery surrounds the entrance of a hidden magma chamber.

“We are excited to see where the legs ahead take us,” says Bridget. “Both literally and environmentally.”

Put energy towards problems, not each other. “Whether you’ve lost your passport or run out of fuel, don’t put time and effort into blaming one another. There’ll always be hiccups, and chances are you’ll both have your turn causing them.”

Divide and conquer. “Separate tasks mean much less stepping on each other’s toes.” Bridget and Topher assign everything from hotel organizer to the person in charge of passports during border crossings.

Choose a relationship “keyword”. “We use the word ’pothole’, which means we are heading into a small meaningless argument. As soon as we establish it is a pothole argument, we remind ourselves the outcome will be of little help and we stop.” 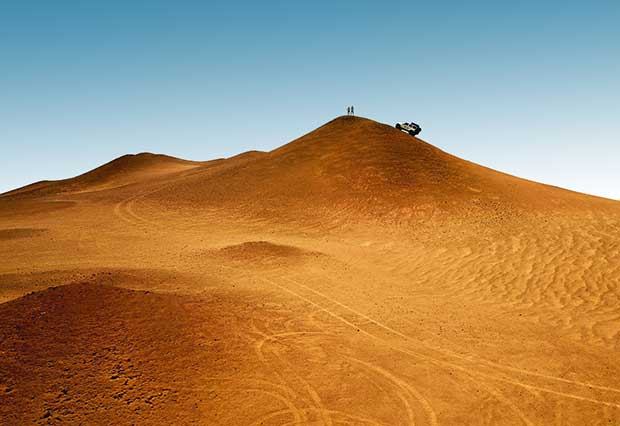 Bridget, Topher and Gunther reach the top of a mountain-sized sand dune in Peru’s Sechura Desert. This desert coastline covers 10 per cent of the country but is home to more than half the Peruvian population.

Stock up on snacks. “We both believe hunger is a huge cause of unnecessary anger. A generous stash of snacks can help diffuse cranky moods and potential conflicts.”

Make a plan for sticky situations. Bridget and Topher predetermined quick solutions to “what if” scenarios at the start of the trip — like where to meet if they got lost or mugged. “We’ve always stuck by these agreed rules, and it has avoided a lot of arguments.”

Porridge for breakfast, because it’s easy to cook and clean. The water, long-life milk and oats also have a long shelf-life — an easy win for these vagabonders.

Salami, Baby Bell cheese and boiled eggs for lunch. The pair usually drive through lunch to save mornings and afternoons for capturing content. This lunch is an easy front-seat option.

Bolognese for dinner was a favourite for the first nine months of the trip. Pasta and sauce keep well, and beef mince is easily found in most parts of the world.

“Every country has new brands, so it’s simply been a year of trying a hundred different types of bolognese sauce, but now we are becoming more creative.”

Where are they now? Follow Bridget and Topher’s route in real time through their GPS tracker, which updates their location every 10 minutes.

The path of Expedition Earth is similar to that traveled by German globetrotter Gunther Holtorf, whose 24-year, 884,000-kilometre road trip was mostly taken with his late wife Christine.

Bridget and Topher were so inspired by Gunther’s passion for driving the planet, they named their Jeep after him.

Why autumn is a great time to visit Queenstown