Rongotea dairy farmer Alan Rowe has struck a surprising little problem with the car he has owned for 47 years. Loads of people want to buy it. “I’ll enter a car park and they’ll come over to ask if it’s for sale or make an offer on the spot,” he says as his 1966 Mark 1 Cortina estate travels sprightly across the network of roads to the south of Sanson.

While not hitting the high notes as a driver’s car, the no-frills five-door rear-wheel-drive wagon is lively enough on the straights.

“It’s very economical to run and sits well at 100 kilometres an hour.” 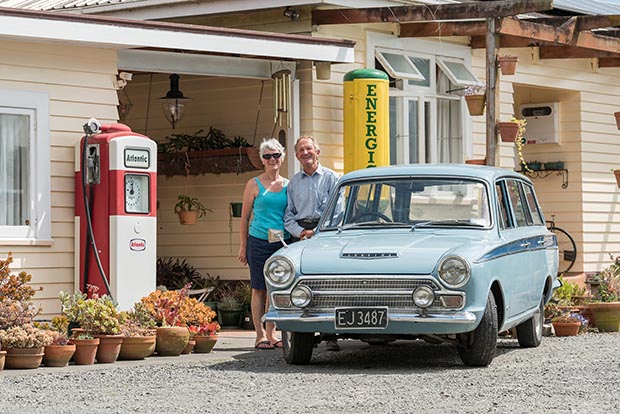 Equipped with its third engine, its second gearbox and a colossal performance on the clock – “it’s done 690,400 kilometres that we know of but only having a five-digit odometer it may have been around the clock once more than that” – Alan’s estate is unpretentious and unassuming. But four decades after he bought it from a local car dealer for reasons of pure practicality – “I played in a band at our local youth group and needed the boot space for my gear” – it’s morphed into a sought-after 1960s motoring celebrity.

“It always starts first pop, its lights are extremely good, the windscreen wipers have to be manually operated for intermittent use and the heater can be a bit of a pain – it’s stuck on hot so we have the windows open in summer.

“Other than a burst radiator hose on the first day of our honeymoon – and fortunately the garage at Turakina had a replacement – it’s never let us down.”

The trio of Alan, his Cortina and his future wife converged in July 1971. “I met Pauline a week after I bought the Cortina and it was the car of our courtship. When we married it was an era where people did crazy things with the bridal car.

“Pauline’s father was a big prankster. We went to great lengths to hide the Cortina in a friend’s car shed in Feilding on our wedding day. He apparently searched high and low for it.” From honeymoon tourer to long-time family wheels, other cars have come and gone in the Rowe family but the Cortina remains at its core. Launched in 1962 by Ford management in Britain, the medium-sized model was a lightweight, cheap and cheerful kit of parts (composed of earlier Ford models), capable of delivering a decent performance from its modest 1200cc and 1500cc four-cylinder engines.

Alan’s 1500cc estate version was released in 1963 and offered class-leading load capacity. It has a touch of Detroit-styling, but the Cortina name was actually inspired by the venue for the 1956 Winter Olympics – the stylish resort of Cortina d’Ampezzo in Northern Italy. Ford’s British chair Sir Patrick Hennessey hoped to call it Caprino until he learned it was Italian for goat dung.

The Cortina targeted the opposition – those with the keys to Morris Oxfords and Vauxhall Victors – and it won hands down. It went global and spawned three generations of bestselling, value-for-money Cortinas. Today a tidy example can represent a canny investment and prices are only going in one direction. 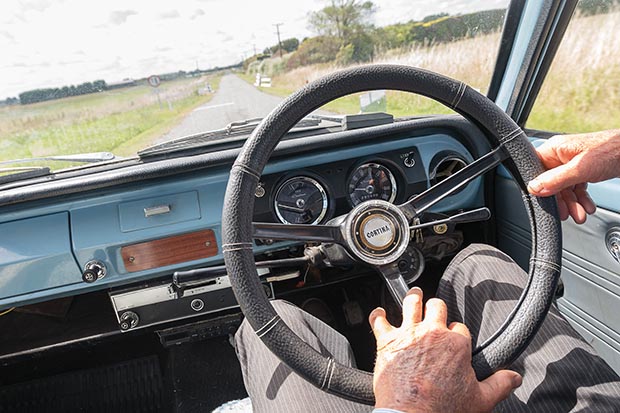 Pauline and the three ensuing Rowe children learned to drive in theirs, it has crisscrossed the North Island on family holidays and has been Alan’s workhorse on the farm and around the district during his years as an artificial-insemination technician.

“At high school the children said, ‘Oh Mum please don’t park outside school’ but that changed when one of our daughters had no option but to drive it one day and it was an instant boy magnet,” says Pauline.

And it’s been stolen.

“One evening during the late 1990s Pauline was at a meeting near the town centre in Palmerston North and it disappeared. It was recovered by the police a week or two later sitting in a suburban communal carport none the worse for wear apart from a flat battery and some personal contents missing.”

It’s since had an engine immobilizer system installed as a precaution. “Prior to being stolen you could open it with your fingernail. It has a fist full of keys for the ignition, driver’s door, fuel cap and boot.” Garaged all its life, Alan continues to drive the Cortina almost daily.

“In the 1980s even my father offered to loan us money for a new car. But there was no need. It did the job.”

The plain-sailing partnership between farmer and Ford Cortina is punctuated by general motor work and a major paint and panel overhaul eight years ago. Then it was stripped out, rust spots were removed from the door hinges, it was repainted (its original colour but Alan added the dark stripe) and its front bench seat was reupholstered along with the interior roof.

While Alan prefers to send the Cortina to the garage for engine maintenance (it’s never failed a warrant) he is at ease under any bonnet.

“Our daughter works at the Chateau and a few years ago we’d seen a Mini sitting under a tree. A pile of snow had dented its roof and it had been off the road for 22 years. We’ve had some fun rebuilding it and it’s now back on the road.” 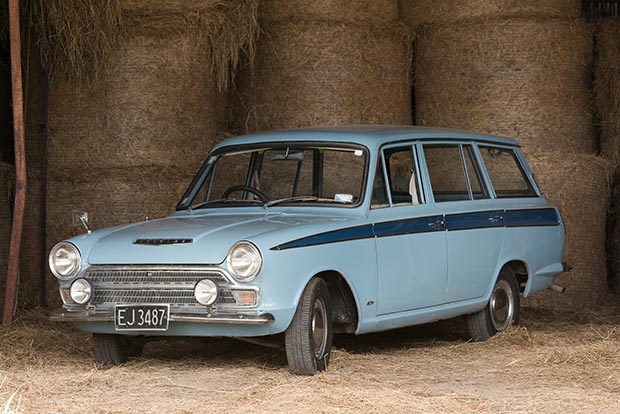 These days there is a modern Land Cruiser and Nissan in the Rowe’s farm yard plus the small matter of 15 vintage tractors in nearby sheds – shared with farming son Haydon – and Alan and Pauline’s three Model Ts.

And on a fresh autumn morning that old car is beetling into Rongotea on a regular farm supplies run with its main man behind the wheel – totally oblivious to 1960s cool and cash offers.