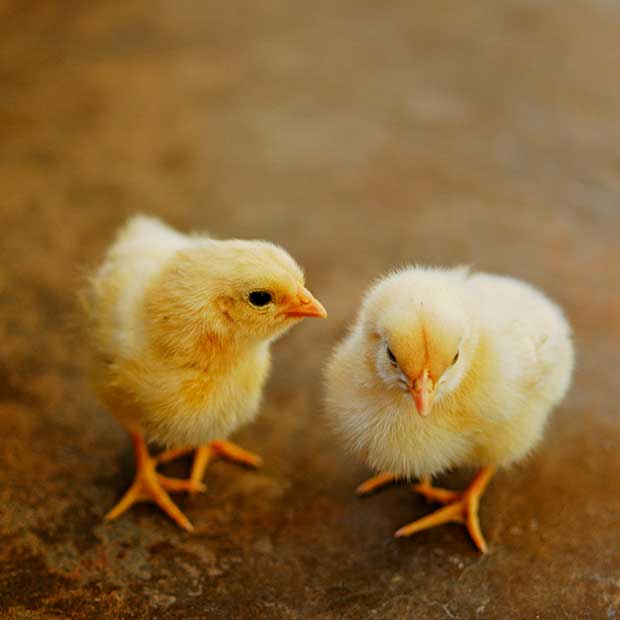 The chicken is a fighter, not a lover, a born percher and bather, but not that bright when it comes to knowing who their friends are.

1. CHICKS HAVE SOME AMAZING PRE-PROGRAMMED INSTINCTS

Early research on chicken behaviour focused on determining which ones are instinctive and which are learned. In a study, chicks blindfolded from the onset of hatch until 1-3 days of age still instinctively preened themselves and scratched on the ground.

When given a worm, even if alone, these chicks ran around as though there might be others in pursuit of the worm. Other research has shown that chicks instinctively show fear of stinging insects but try to catch flies.

2. …BUT NOT EVERYTHING COMES NATURALLY

However, some behaviours have to be taught. For example, chicks peck at their own excreta until they learn not to.

Chicks must also be taught to drink. When chicks are raised without a hen, producers must dip their beaks in water so that they learn to drink. When the beak gets wet, the chick’s drinking response is initiated. Researchers have observed that chicks will not peck at a sheet of water, even if they are thirsty and standing in it, but they will peck at shiny objects or bubbles in the water.

There is some evidence of pre-hatching interactions between hens and chicks. Embryos and hens begin to vocalise the day before hatching and do so more and more often as hatching approaches.

If an embryo begins to give a distress call, the hen vocalises or moves on the nest and the embryo becomes silent or begins to emit pleasure calls. 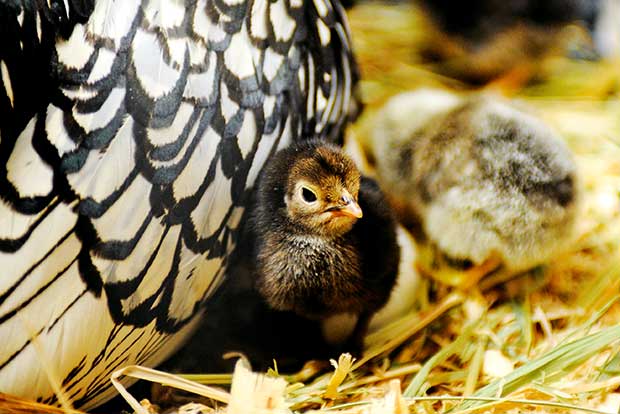 4. CHICKS WILL LOVE ANYONE, SO LONG AS THEY’RE WARM

The main need of newly-hatched chicks is warmth. Research has shown that chicks will press against any source of warmth if they are cold and the source need not be a hen.

In studies, young chicks that had not been exposed to the sound or sight of a hen ran to a box containing a hen and other chicks. This instinct to respond to the hen, however, is lost by eight days of age.

When chicks from different hens were combined and allowed to mingle, they were able to locate the appropriate hen when the hens were placed with the group. After three weeks of age, the chicks were less effective in doing so. 6.HENS HAVE NO FAVOURITES

When it comes to a brood of chicks it is simply first come, first served when you’re a mother hen – but only if she can hear them. Vocal communication is important in the hen-chick relationship.

If a chick is hidden from its hen, it gives distress calls, and the hen typically goes in the direction of the sound. But if the chick is in a glass container so that the hen can see but not hear it, the hen takes no notice of it.

The time at which a hen disassociates from her brood varies, but it’s usually before the chicks are 12-16 weeks, and she initiates the break-up. She pushes her chicks away and rejoins the adult birds. If she can’t return to other adults, she will remain in charge until the males in the group mature and begin to dominate her. If she has only one or two chicks, she may tolerate her offspring longer than usual. 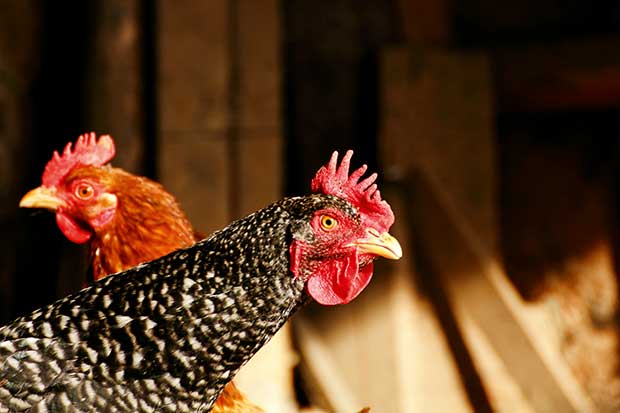 A laying hen can recognise around 30 individuals.

Recently-hatched chicks do not typically show any competitive behaviour until after three days of age, but by 16 days of age, fighting to determine the pecking order begins.

Research has shown that when groups are composed entirely of female chicks, the pecking order is established by the 10th week.

In small groups, the order is typically established earlier, around eight weeks. With groups of males, the social order may remain unresolved for many weeks more.

10. SOME ARE BORN LEADERS

Certain chicks within a brood develop leadership roles. Scientists tested a scenario in which there were two sources of heat, only one of which was turned on. Chicks would gather around the one turned on. If that heater was turned off and the other turned on, chicks moved to the other heat source. 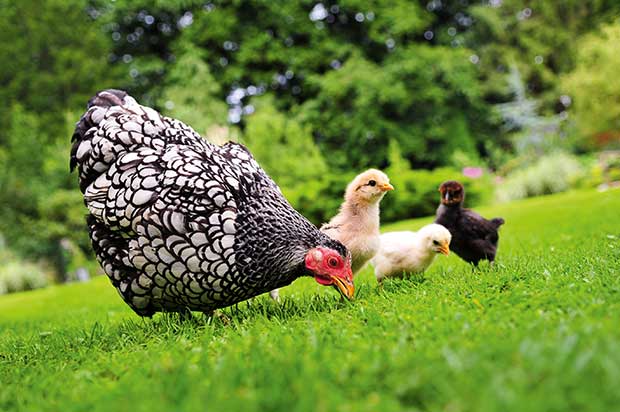 Even when you provide feed for them, chickens will spend most their time foraging.

But some chicks repeatedly responded sooner than others, and a few were also observed leaving the group under the warm heat lamp to go to a chick lagging in the cold so that it would follow the leader to the heat source.

Birds that normally form a social hierarchy, such as chickens, doves, and pigeons, usually attack a new bird of the same species or breed that is introduced into the pen or cages.

In order to develop a pecking order, birds must be able to recognise individuals in a flock so they can identify and peck only those lower in the pecking order. However, it is not clear what clues chickens are using in order to identify individual chickens within a flock.

Similarly, when individual hens were returned to a flock after removal of their comb, they were attacked by the hens that had previously been below them in the pecking order. 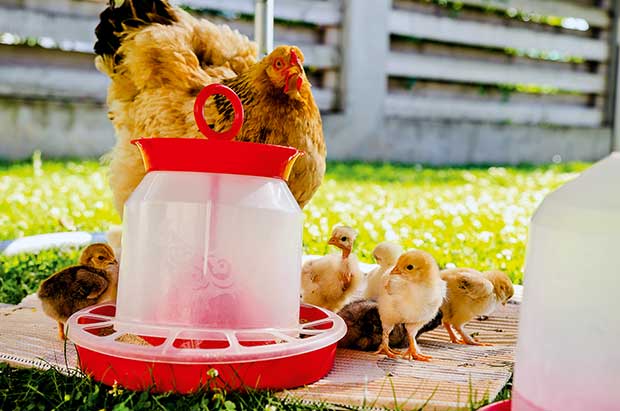 If, however, a larger number of dubbed hens were returned to the flock, the chickens were able to develop a new pecking order which would suggest that the comb is not the only factor used in identifying individuals in a flock.

More stories you might like:
The secret life of an alpaca farmer: How this Karaka resident balances big-city glamour with raising 150 alpacas

Research shows that individual birds react to feather changes and make adjustments. Intense colour changes on white individuals are more effective in producing a loss of recognition than different shades or tints.

Alterations of the head and neck were shown to be more effective in producing a loss of recognition than changes to areas of the main body. Their conclusion: no single feature is the sole means of recognition.

A laying hen can recognise around 30 individuals, but the social structure developed in small groups begins to break down in flocks of 30-60 birds. When there are more than 60 birds in a flock, the chickens become less aggressive and more tolerant.

13. THEY’RE PRETTY SCRAPPY AMONGST EACH OTHER

Fighting often continues until they reach maturity and the pecking order is well established.

Sometimes fights occur among adult birds when a member of the flock becomes tired of its position in the social hierarchy and decides to challenge a higher-ranking bird.

More commonly, fights occur when a new bird is introduced into the flock and has to find its place in the pecking order, or when a bird is reintroduced to the flock after a long absence. 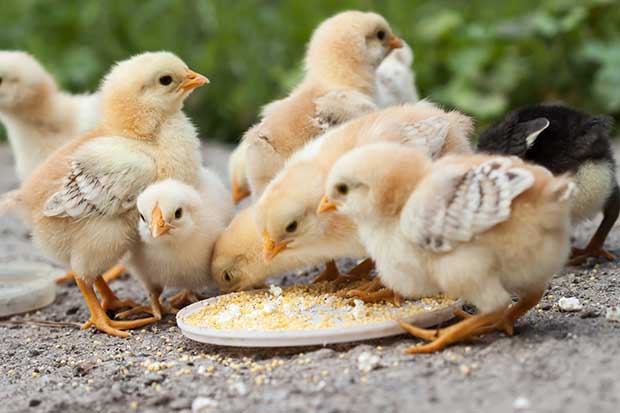 14. THE MALES ARE PRETTY VIOLENT

Although both male and female chickens fight, fights between males tend to be more violent and are more likely to result in injury or death.

When two birds are on the verge of a fight, they will eye each other and may casually circle around each other, each pretending to peck at something on the ground while watching the other.

When the fight begins, the birds will raise their neck feathers and point their wings toward the ground, spreading them apart from the body.
They will then stand as tall as they can and try to face each other down. If neither bird backs down, they will start pecking, scratching, and jumping at each other. They will also beat at each other with their wings.

16. OLDER HENS TEACH THE YOUNG ONES WHERE TO LAY

It is important for pullets to have access to nesting boxes before they start to lay.

If a hen will have to jump up to a nest, she must be trained to do so when young. If she does not learn then, she’s more likely to end up laying a greater number of eggs on the floor.

Birds are mimics, and the first layers become the teachers for the remaining pullets in a flock.

17. SOME HENS ARE OFF IN THEIR NEST BOX PREFERENCES

Hens differ in their preference for nesting location. When a group of hens is given the choice between a nest box and a litter tray, the majority prefer the nest box but there are always some who prefer the litter tray.

Those that select the litter tray tend to be the ones which spend more time exploring during the hour prior to laying an egg than those that selected the nest box.

The pre-laying behaviour of domestic chickens is similar for most hens.

Before laying, a hen shows restlessness and begins to look for a nest, poking her head into the nest boxes provided.

Between nest examinations, she typically resumes other behaviours she has been performing like eating, preening, sleeping, and so on. Over time, the hen puts more and more of her body into the nest boxes she is examining, eventually entering one and settling down. 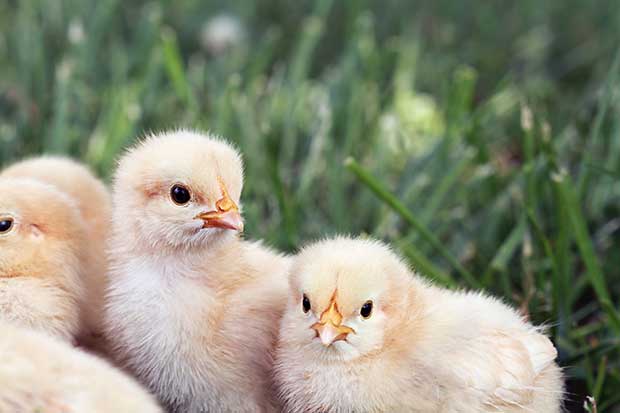 As a result, these hens spend more time visiting and investigating a number of potential nest sites before choosing one. In contrast, hybrid layers of brown-shelled eggs tend to sit longer in nests and perform nest building activities.

If egg laying is delayed for some reason, the period for pre-laying behaviour will pass, and the hen will no longer be motivated to search for a nest. In these cases, the egg may be laid outside the nest while the hen goes about other activities. This can happen when dominant hens are preventing subordinate hens from entering nests.

Domestic hens prefer to lay in nests containing loose material that they can settle into, moulding the material with their bodies and feet, then manipulating it with their beaks. 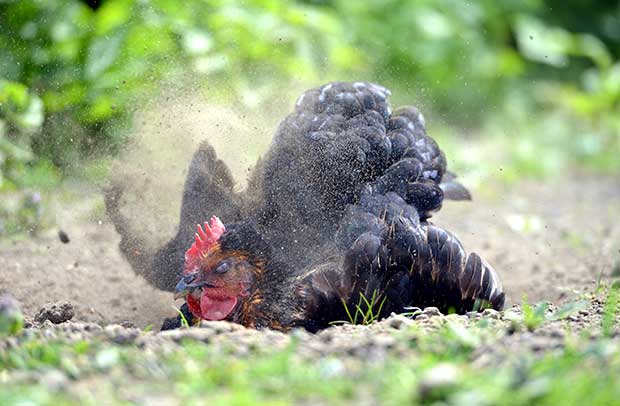 19. A GOOD BEAUTY REGIME IS IMPORTANT

Grooming activity in birds is referred to as preening, and caring for feathers is important for insulation and waterproofing, in addition to flight for those bird species that can fly.

Feathers are composed of a shaft with several long thin structures called barbs. These barbs are held together by smaller barbules. Sometimes the barbs are pulled apart, which makes the feather ineffective for insulation and waterproofing.

A bird runs its feathers through its beak when it preens, which realigns the barbs and makes the feathers better able to perform their functions.

Birds also need to keep their feathers oiled to prevent them from becoming brittle and to help with insulation and waterproofing. Birds have a single oil gland near the base of the tail, referred to as the preen gland.

Birds pinch this gland with their beaks to extract a waxy oil, which they then apply as they pass their feathers through their beaks. Chickens preen on their own, but they prefer to do it as a group activity. 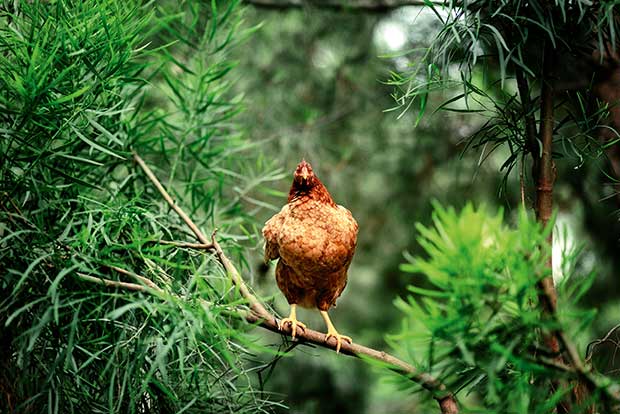 20. BATHING IS IMPORTANT WHETHER YOU HAVE A BATH OR NOT

Dust bathing is the act of rolling or moving around in dirt to cleanse the skin and feathers of parasites, dead skin, and other skin irritants. It also helps prevent the build-up of the oil from preening.

When chickens don’t have access to dust baths, they will nonetheless go through the motions of dust bathing. In behavioural studies, hens have shown a willingness to work to gain access to material for dust bathing.

Access to a dust bath does not prevent feather pecking.