With long straight roads and a lack of big-town buzz, many of those living in Mid Canterbury make their own fun. For those planning ahead, be sure to pick up the phone and chat to some of the region’s collectors – from locals who still love Elvis to others passionate about glittering agate, they are only too happy to share their passion with those passing by.

Ernie Schoenfeld, owner of the 1950s-looking Hinds Mechanical Services (photo above), knew he’d come across something special when he purchased the fanatic-favourite store in 2015. “I’ve been a petrol head all my life but I’ve never done anything in that field professionally. I was actually looking for a workshop to do more stuff with my cars. I stumbled upon this and I just decided to jump in with both feet.” The garage, the yard and the villa next door are stocked to the max with tens of thousands of classic-car parts. It’s a time warp, a drive through the decades, with loads of appeal – classic-car enthusiast or not. 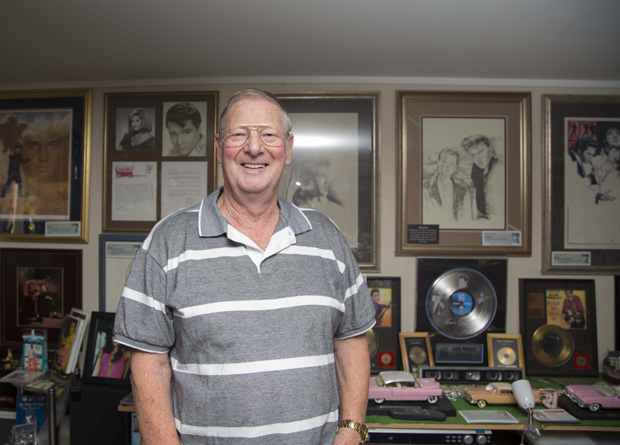 ELVIS IN THE BUILDING

Elvis sightings are nothing new, but who would have thought the King would be alive and well in Ashburton? Well, his memory is, thanks to an enormous memorabilia collection, lovingly found, placed and cared for by John Lobb. In 1956 John was one of a small number of pupils at Cashmere High during the period when everything was about rock and roll. “Elvis came along and I thought, ‘oh, I like this’, so I bought my first record and I just kept going.” John has been collecting ever since and will flick on the lights in his garage to run through his collection when a visitor gives him a call. At the centre of the display is a very cute Elvis doll made by John’s wife.

A stone’s throw from Ashburton is an orphanage housing between 4000 and 5000 orphans. That’s a good guess, thinks Malcolm Luxton, who set up the Agate Orphanage for people to enjoy his collection of the colourful, often-volcanic rock. Malcolm considers himself a low-key, country bumpkin from Ashburton. As a kid, he was always interested in nature and would often be found searching the beach for eye-catching stones. But it wasn’t until later that he found out that he was right smack in the middle of New Zealand’s agate paradise. He joined the Christchurch Agate Club and 50 years later, his collection numbers thousands. He’s photographed hundreds of them and put together a book called Agates of New Zealand. This is an extract from the 2017 edition of the Insider’s Guide to New Zealand. Pre-order the 2019 edition now at shop.thisnzlife.co.nz