“Don’t step back!” I freeze, my finger poised on the shutter release.

On the Routeburn, an epic 32-kilometre track that climbs through alpine tussock and over rocks to reach a snow-chilled 1250 metres, a wrong move could cause serious injury. We have a first aid kit — including emergency blanket, sling, bandage and whistle — but would much prefer not to use it.

My wife Audrey’s concern, however, is not for me, but for the toutouwai (south island robin) that has obligingly hopped straight towards my camera then darted between my feet to stand right behind my boots. 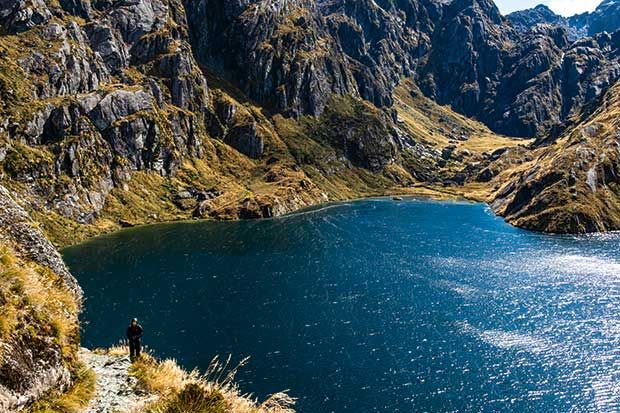 Lake Harris, at the base of Conical Hill. A small track snakes around the lake’s edge before making its way to the Harris Shelter.

Together with our son Rouan and sister-in-law Gillian, we’re on a four-day tramp from the Routeburn Shelter to the Harris Saddle and return. Setting off, we wonder what challenges lie ahead.

Are we ready? Are we fit enough? We’ve spent the past few months tramping around the streets of Auckland, circumnavigating the Auckland Domain and climbing to the top of Maungawhau (Mt Eden) with packs averaging 10 kilogrammes.

Our last multi-day tramp was more than 30 years ago. We have borrowed backpacks and sleeping bags, resurrected tin mugs and dixies from our camping youth. Weight is critical. Our gear includes thermals and over-trousers. Meals are freeze dried. And we are carrying lots and lots of snack bars.

We’d planned to hike from the Routeburn Shelter, near Glenorchy, to the Divide, along the Te Anau-Milford Highway. But a couple of days before departure, my inbox pings:

“DOC: WARNING!” Heavy rain had caused a slip and destroyed a footbridge between the Lake Howden Hut and the Divide, closing part of the track.
Red, silver and mountain beech line the sides of the trail as we gradually ascend towards the Routeburn Flats. Their trunks reach up from a carpet of green moss that covers rotting logs, mountain boulders and dead animals. Emerging from the moss are tiny shoots of newborn green with translucent leaves and clusters of perfectly round red and orange berries. 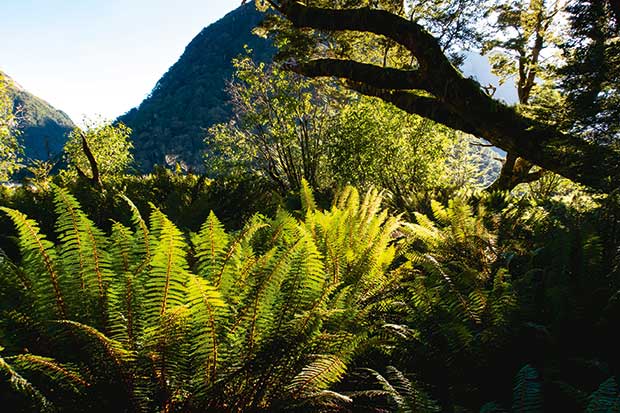 The first leg of the Routeburn (from the Shelter to the Flats Hut) weaves through beech forest.

We see trees that began life as seedlings atop fallen logs of older beech — which can live for up to 300 years — wrapping their roots around the fallen trunks as they reach for the soil. The logs eventually rot, leaving the saplings standing on claw-like stilts.

This ecosystem supports a vast, mostly unseen, abundance of life. Humans, too, are part of this ecosystem, yet the introduction of predators that feed on eggs and chicks have silenced birdsong and threatened many native species. Alex, the ranger at the Routeburn Falls hut, later tells us there are a staggering 12.5 possums for every New Zealander.

The emerald waters of the Routeburn run alongside us, whispering as they weave between roots and stones, soaring to a crescendo as they crash over boulders. The water is mountain clear, and, according to rangers, drinkable. Rouan holds his bottle under a rocky overhang, and we watch a thread of ice-cold water trickle in.

“Burn” is Scottish for “river”, and the Routeburn flows along the main route between the Humboldt Mountains, ​named after scientist and explorer Alexander von Humboldt (though he never made it to New Zealand). Our walk follows the burn through the glacially carved valley and up between white-topped mountains.

Swing bridges crisscross the river, swaying to the syncopated rhythm of our plodding feet, and we need to grip the cables that span their length, the water laughing and jumping from rock to rock below us. 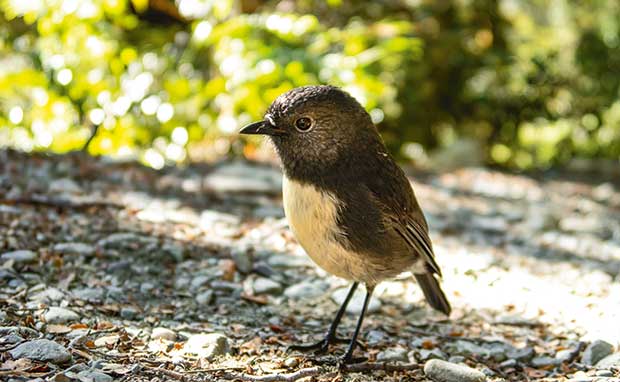 A delight on the trail is the toutouwai (south island robin), but be careful, the inquisitive bird flits around the feet.

The Flats hut sits snugly at the base of a mountain, and, spread out before it, are wide-open honey-coloured plains, divided by the clear-flowing, silver-pebbled Routeburn. Pairs of pūtangitangi (paradise duck) squawk overhead, the female distinguishable with her startling white head. On the horizon, snowy peaks reach towards swollen gunpowder-grey clouds.

On our return route, we spend a night at the Flats and marvel at how the valley changes its palette. In the early evening, mist drifts in and puffs of white float across the river and hug the edge of the valley.

As the sun disappears, the sky turns rose, and the grasses glow a dull gold. In the deep of night, the sky reveals its full glory of a million stars, the Milky Way amplified in the absence of artificial light. An early morning frost turns the grass crispy white and, as the sun rises, melting droplets alight, turning the blades a bright golden.

For now, the Flats are a welcome break after our first few hours. We shed our heavy packs and walking poles, slap at sandflies, brew tea and munch on snack bars, feeling the sugar refuel us.

“Oh, no,” I say. “Litter ahead.” A small black and white something is lying on the track in front of a cluster of frenetic hōutuutu (riflemen) feeding on insects. It is a tiny shoe. Who would carry a baby up a track like this?

I tie the shoe to my pack. We wonder if we will meet its owner at the Routeburn Falls. 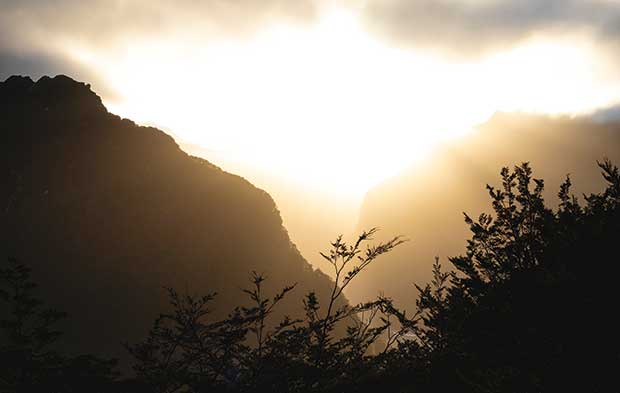 Weather on the trail can change quickly — expect snowy winds one minute, rays of sunshine powering through the clouds like searchlights the next.

It is late afternoon when we reach the hut. The Falls marks the end of the beech forest and the start of the alpine ascent toward the Harris Saddle. We are filling in the hut registration sheet when we overhear a man talking to his son.

“It must be lying on the track somewhere.”

The boy looks forlorn. He is holding a little black and white shoe. Audrey and I look at each other.

“Wait a minute,” Audrey says and disappears into our bunk room. The boy is thrilled when she returns with the other shoe. It does not belong to a baby, but a teddy bear.

Cooking dinner, I glance sideways at the concertina silicone pots that have sprung up on the gas elements alongside our vintage tin dixies. Time for an upgrade? As I scrape the vegetarian stir-fry out of packets, I contemplate the Pog Mahones pub meal that awaits us in Queenstown in three days.

We retreat to our bottom bunks, thankful to avoid clambering up narrow ladders. The icy cold has crept into the 48-bed bunk room, leaching into our tired muscles. Shivering,

I flick on a torch and rummage for thermals, then stuff my pillowcase with shorts and a jumper and a raincoat. I insert earplugs, pull my beanie over my ears and gloves onto my hands and wriggle into my sleeping bag. Soon the sound of snoring and shuffling recedes, and I drift off. Several cable swing bridges span the Routeburn, with limits on the number of people who may cross at any time.

In the morning, we are late up and last out. Gillian calls to us, “Come and see what I’ve found.”

It’s the sharp-beaked thief which steals trampers’ boots and gnaws through the rubber parts of tramping poles; hard at work is the world’s only alpine parrot, a kea, intent on tearing up a section of plastic netting. Our bunk mates crowd the hut balcony, cameras directed at the ground. Head down, the bird ignores the paparazzi.

Ambitious trampers are already halfway up the mountain. Some enjoy the challenge of covering the track at a trot in one day. Age, caution and a desire to enjoy everything along the way renders us snail-slow.

We leave our large packs at the hut and begin the alpine section with daypacks.

“Man, this feels light,” I grin, doing a little jig. The change in the track is dramatic, from dense forest to a vista of faraway emptiness, gunmetal mountains with jagged white tops that fall to valleys 1000 metres below. It’s an austere and rugged landscape. Signs warn us to expect extreme changes in weather and to be prepared for avalanches. The view from the Routeburn Flats hut — the first stop on the trail — is classic postcard imagery. Take the time to watch the sun go down behind the mountains and see the spectacular night sky emerge.

Raincoats on. Raincoats off. Sunblock. Lip balm. Then thermals and woolly hats and gloves to buffer ice-cold winds. “Snow,” announces Rouan, lifting his face. We are delighted at the sprinkling of tiny white flakes.

The rawness, the dangerous edge, the strain in our muscles, our aching shoulders — somehow, they enhance the experience and the beauty of the landscape.

The panorama behind us widens as we ascend. From this height, we can track the burn navigating its way downward, sometimes falling from cliff faces or congregating in pools, other times a twisted band of silver, flowing around boulders and hillocks and through undulating valleys of olive, and becoming a thread of white in the distance.

We climb higher, breathing harder. We are minutes from the Harris Saddle. The steely lake that feeds the burn has carved a reservoir at the base of Conical Hill. Its surface ripples, dancing to the whim of the wind. 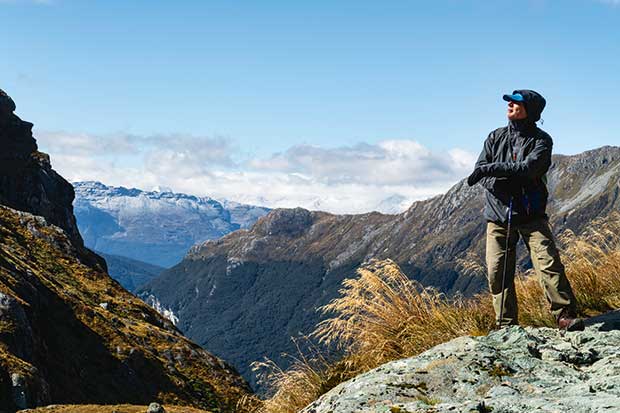 The writer allows himself a moment of satisfaction, standing at the highest point on the trail (1255 metres) minutes before arriving at the Harris Saddle.

The track narrows to single file, with a steep drop to the lake on one side as we round a corner. “Yee ha!” I thrust my fist into the air.

The DOC shelter perched on the saddle comes into view. After our relative isolation on the track, it seems to swarm with trampers, some in various poses of recuperation.

We feel an unspoken bond. Stepping out of our everyday lives, most of us have pushed ourselves to get here. We exchange smiles, despite an accumulation of aches and pains. For all of us, there is a sense of achievement.

Some venture up Conical Hill — a one- to two-hour return sidetrack — for 360-degree views of the mountains and a glimpse of the ocean. Another tramper offers to take a photo of the four of us, our backs to the alps, a record of our journey and our achievement. 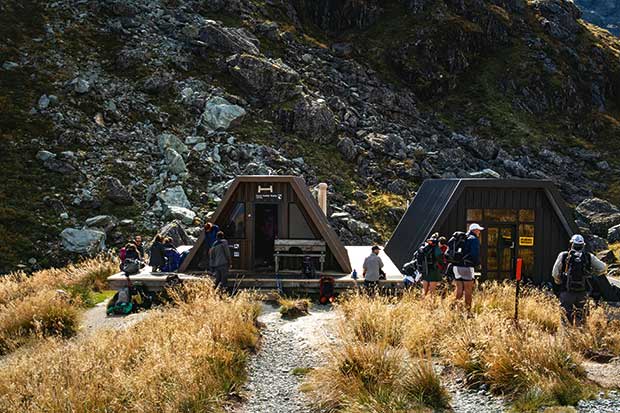 The Harris emergency shelter. There is no overnighting here (unless in a crisis), but the shelter does provide a welcome comfort stop.

Routeburn explorer and poet, the late Charles Brasch wrote: “I keep wondering if I really like tramping — the cold and the loneliness and the fear, do they really outweigh the magnificence, the terrible impersonal glory of the mountains?”

I hoist my pack onto my back — the others rise in unison. The way back down beckons. I don’t know the answer Brasch arrived at — but for me, at this moment, there is nowhere else I’d rather be.

Get there: Fly to Queenstown. Book a shuttle to the Divide and from the Shelter or vice versa, infotrack.co.nz

Accommodation: Huts ($65 per adult) need to be reserved through DOC, doc.govt.nz Book well in advance in peak season. Rooms are dorm-like with bunks and are first-in first-served. Take ear plugs. There are no showers or power points. Guided groups can also assist in booking a lodge, which will have more facilities than a hut. See ultimatehikes.co.nz

When to travel: The best times are spring and autumn. Regardless of season, expect four in one day. The track is closed in winter. Notify someone of return date, and contact them when out. For most, the hike will take three to four days.

Training: Being fit is an advantage. A backpack can weigh about 10 kilogrammes minus filled water bottles. Take a month or two to hike around the neighbourhood with a loaded pack. Be sure to include a few hills.