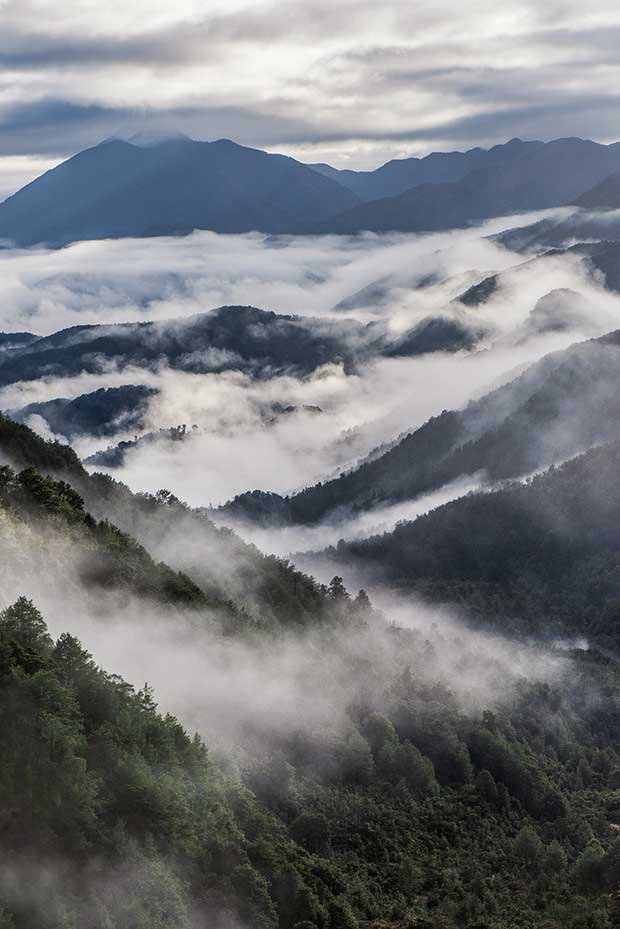 Where once miners dug for gold and glory in the hills above the Buller Gorge, now hikers and bikers discover new depths on the longest dual trail in the country.

When booking a bunk in a DOC hut on an oversubscribed Great Walk becomes as tricky as securing tickets to an international rock act, it’s time to spread the net wider.

The Old Ghost Road on the West Coast is an 85-kilometre trail that runs between Lyell and Seddonville. Operated by a not-for-profit trust, it opened in December 2015 after a gargantuan effort over seven years by a team of hard-ass labourers.

It’s seriously “sick” territory for mountain bikers, but it’s also a tramping track — a walk through the historical mists of the gold rush, a rugged landscape where rusted artifacts acknowledge a miner’s lot, and the terrain changes from floss-dipped forest to twisted ridges and great, grumbling gorges. 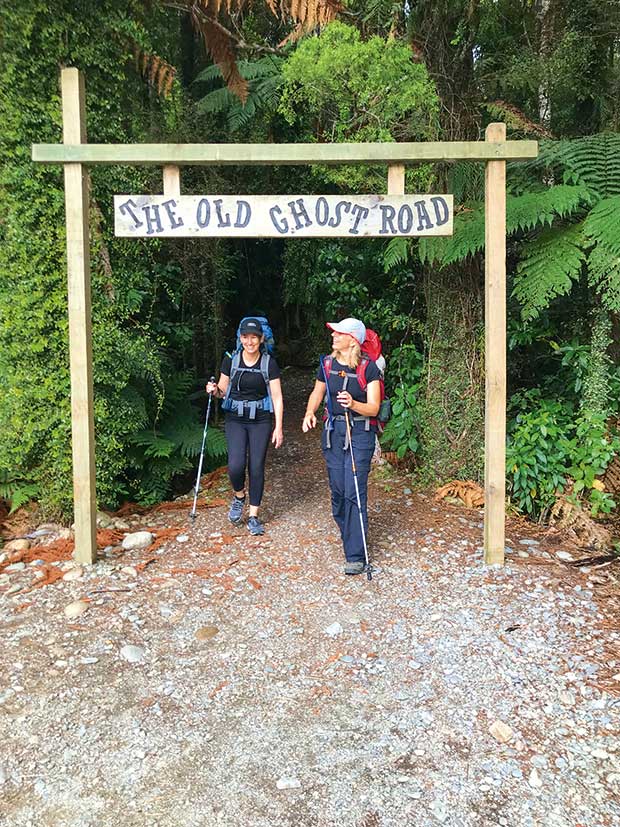 The “proof we were there” shot at the start of the Old Ghost Road track — only 85 kilometres to go.

Loaded with sleeping gear and real food (no dehydrated cheating for us) for the four-night, five-day journey — “less scroggin, more grog in” — we set off from the southern end. I was apprehensive at the thought of sharing the trail with posses of mad bikers. Visions of being swept off my feet — and not in a good way — came to mind.

I needn’t have worried: the first 18 kilometres follows a pioneering dray road and winds up the valley at a gradient guaranteed to keep the over-enthusiastic on two wheels at a sedate pace. 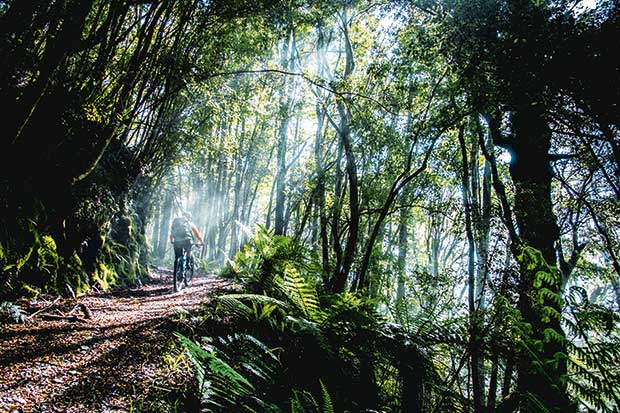 If starting the trail at Lyell, most of the first day rises up to the saddle — it’s a gentle gradient that is tougher on cyclists than walkers.

At Irishman’s Creek, one of the few unbridged water crossings on the trail and, as it turns out aptly named, we come across three puffed-out peddlers. A visitor from Cork had been gifted this premium mountain-bike experience by his sister, and his familial fondness is fading fast as he discovers why this is a grade-four track.

We stroll through fern-fringed gullies, past a collapsed shelter littered with shovels and old boots and occupied by the ghosts of 19th-century gold-diggers. Every kilometre completed is marked by a pale-green post — friendly beacons of information which, over the days, morph into objects of obsession. Negotiating the Skyline Steps is easier on two feet than two wheels.

Lyell Saddle Hut is 875 metres above a valley tapestried in mature beech. It is here we get to meet fellow “ghosters”, and many are on the same schedule as ours. As the evening draws in, the conversation is genial and humour-laced — and the keas that stalk the fence railings on the deck grow more impertinent.

A family of three, who originate from the Czech Republic, are cycling and camping as there was no room left in the hut. Their seven-year-old is a vertigo junkie with fearsome fitness and the technical skills of a champion. While bombarding us with paper aeroplanes, he tells us he is often on the naughty chair at school.

Out here he is podium material. He is stoic when the keas steal his bag of lollies. The next day, we traverse the tussock tops of the ranges, up and over Bald Hill and Rocky Tor past Heaven’s Door. A mizzle comes in as we navigate narrow paths with steep drop-offs that are literally breathtaking. I’m pleased to have my feet on the ground rather than a metal peddle. Occasionally, I step aside to gape at the feats of endurance of bikers as they manoeuvre by.

Keeping one hand on the rock face, I steady myself and admire the granite peaks. Later, sub-alpine grasses and mosses surround Ghost Lake — a deep, black pool encircled by bog plants. 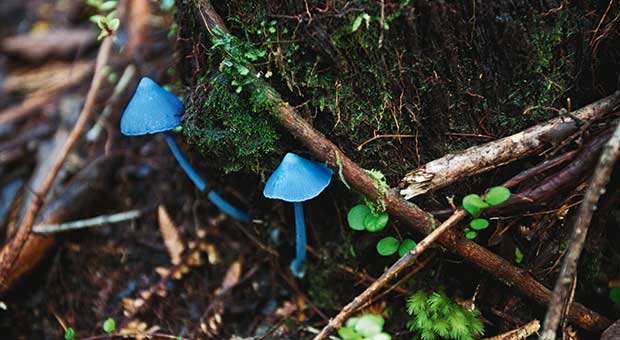 The Māori name for this bright blue fungus is werewere-kōkako.

Dinner at the hut is enjoyed with a bird’s eye trained on the lake, and although a sign demands “no swimming”, the East Europeans disrobe and take the plunge.

As the adventure progresses and the scenery changes, so do our relationships with those on the trail. On multi-day walks such as this, the camaraderie is as much anticipated as the perambulatory pleasures of the journey. 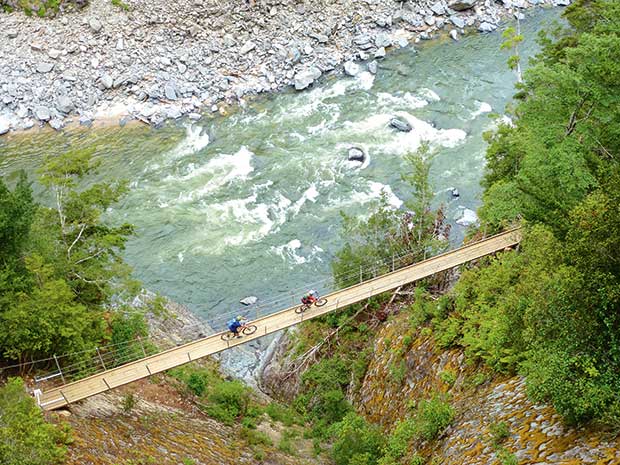 Exquisite examples of engineering abound along the trail and there are 21 bridges including several that make walkers with a fear of heights just a little nervous.

A game of Bananagram draws in the crowd eager for some after-dinner entertainment: two married couples in their sixties from Wellington are seasoned hikers, there’s a young couple in their twenties, and a family from Invercargill with three generations cycling together.

Day three is a short 13-kilometre stretch that takes us through to Stern Hut. The Skyline Steps that descend the ridge are described as “Dr Seuss-like” on the official website. They wind down the valley like floating train-tracks, and I am happy not to be carrying my means of transport. 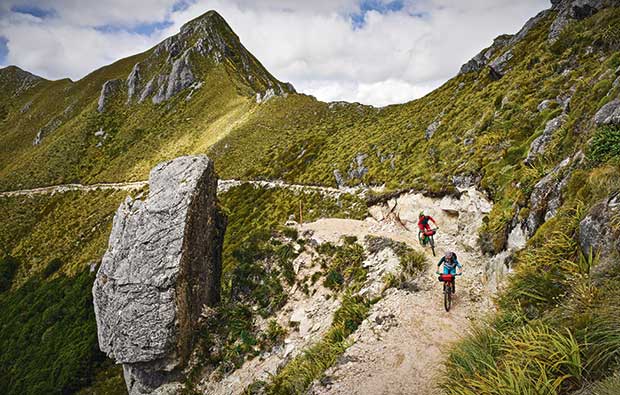 Technical riding and steep drop-offs mean mountain bikers need to be proficient and not foolishly confident.

That evening as we toast the coming New Year a full three hours early with a nip of pinot noir, an ill wind blows.

Whether it’s something in the water, food not stored under mechanized chill or living in close quarters with 13 others, but my partner gets a bad case of “Delhi belly”. He cannot eat or keep anything down. Even the promise of chocolate caramels does not tempt him. Under most circumstances, such a malaise would be irksome, something to be endured.

Here in relative isolation with another 42 kilometres to go, it’s rather more serious. Still, we don’t wish to cause a fuss, so we keep his condition under wraps as he heads to bed early, worn out and wan, and hope for a 24-hour recovery. 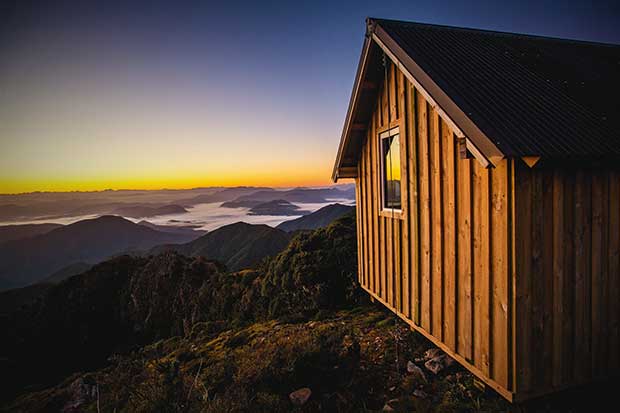 It is a case of good fortune (and an early start) rather than good planning, that gets us to The Boneyard before the sun hits full strength.

This area is a geologist’s dream, with the story of tectonic upheaval on full show. Echoing the tough, dry humour of miners past, the lakes we have walked by this morning are named with wit: Lake Grim and Lake Cheerful, twins on opposite sides of the coin. Weka are almost as cheeky (and light-fingered) as the kea.

It could be a metaphor for our little trio: two of us keeping up a spirited dialogue to encourage one whose steps falter with sickness.

The Invercargill party, who has caught us up rather quickly, stops to talk, perhaps sensing something is wrong. We don’t push the point: one of their group has muscular dystrophy, and although he walks with a not-too-obvious drag of the foot, he can still cycle, so they are all out here (grandma and grandpa included) to enjoy the challenge and share the load.

A 90-metre suspension bridge crosses the river that rumbles by and, an hour before our final hut, we find a place to take a dip. I inch into the icy waters — another group motto is “you never regret a swim” — and, doing my bit for my fellow human, slap several sand flies into oblivion. 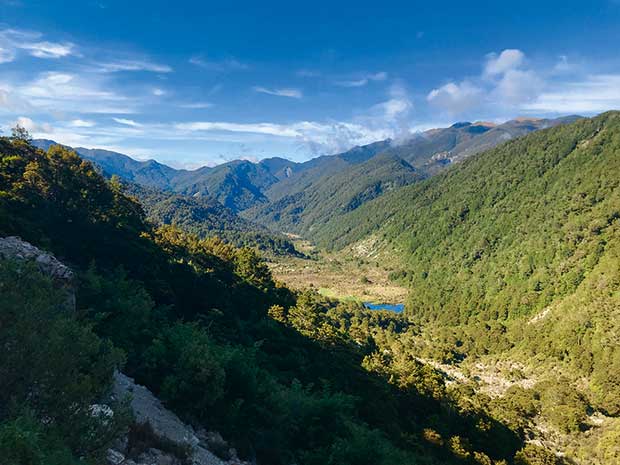 The fourth day begins with a meander past twin lakes (named Grim and Cheerful) and then on a steep upward gradient through The Boneyard, an area where earthquake activity is evident.

There is no doubt that those who choose to explore the backcountry, to forgo showers, to live and sleep in clothes that are ripe with the aroma of toil, to carry their world on their shoulders, to bathe in the forest and move through the landscape in a meditative mood, are of similar spirit.

A connectedness with nature and each other grows — a bond of comradeship those early miners must also have forged. When, on his second day of not eating or participating in sessions of Scrabble, it becomes apparent that one of our party is ill, we are humbled by offers of help: chicken soup, pills for nausea, electrolytes for dehydration. 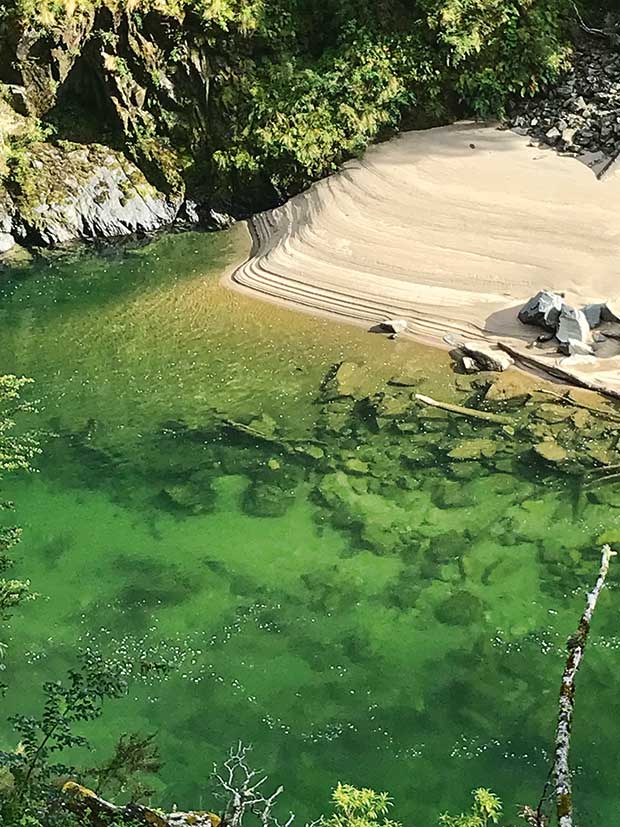 The clear waters and unreachable beaches of the Mokihinui River on the homeward stretch.

The next morning after a hell night, my partner finally agrees to allow one half of the young couple to carry his backpack to the northern trailhead. He is a military officer who met his girlfriend while tramping — and he is insistent. We watch as, his own pack on his back, the other is hitched to his chest. They disappear into the trees.

Markers ticking off the miles appear ever more slowly as 17 kilometres passes in a succession of engineering marvels — bridges that cling to the side of cliffs above the Mohikinui River.

We learn that the young couple had become engaged just the night before, writing it up in the hut book, but keeping the news
to themselves. Welcome sights at the Rough & Tumble.

An old-timer eating an apple heading the other way stops to tell us about how the community fought the creation of a hydroelectric dam here which would have inundated 330 hectares of forest. You’d be walking underwater now, he offers helpfully.

As the Rough & Tumble lodge — a rustic haven of hospitality at the edge of an all-but-forgotten coal town — comes within stumbling distance, the lure of a home-cooked meal pulls us on. 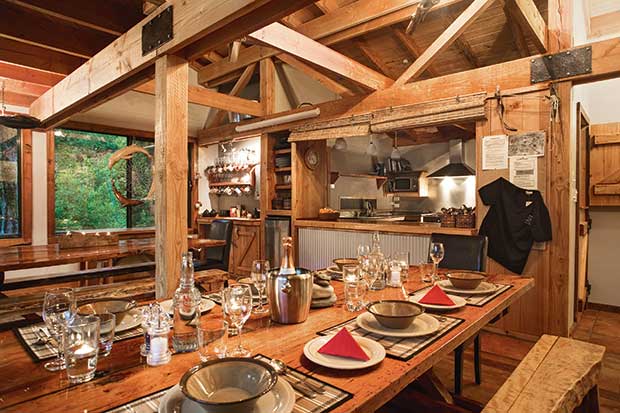 As we reach the entrance stairs, hot, sweaty and glad to have arrived, an organic craft lager is served with a side of West Coast welcome.

The others are already here, lifting a glass to our achievement. The young couple has headed into town. Our backpack is on the porch.

How to get there: Air New Zealand no longer flies to Westport, the closest city, but Sounds Air flies from Wellington. Otherwise, fly into Nelson (a night’s stay may be required) and then take a shuttle to either end of the trail. There are several shuttle operators and car re-locators listed on the Old Ghost Road website.

Other things to know: It may be worth paying a little more to stay in the cribs that offer separate sleeping accommodation (for four) from the huts (although you still use the cooking facilities in the main hut).

They have no heating so only a good idea in summer. The huts are not only equipped with gas cookers, but also pots, pans, plates and cutlery so there is no need to carry your own.

A bucket-shower system in cubicles set away from the hut is also available.

After the walk: I recommend doing the walk from south to north if only to stay at the Rough & Tumble bush lodge at the end. The property is a gentle re-introduction into “civilization”, the rooms are spotless and comfy, the bush views are beautiful, there’s a luxurious outdoor shower and the evening meal, served buffet-style, is homely and plentiful.