On holiday in Venice with actress Alison Quigan 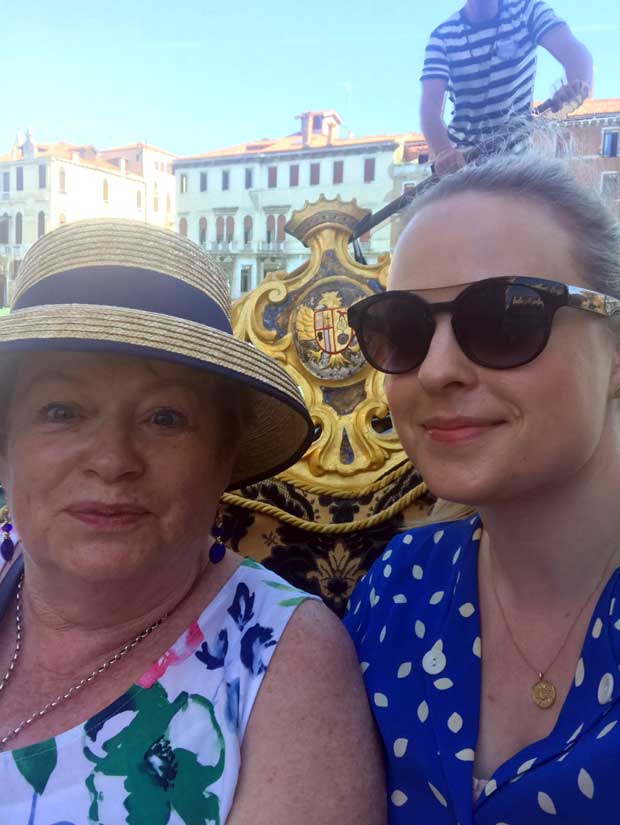 Alison Quigan and her daughter Sarah on a gondola in Venice.

She may only be edging towards her 70s, but Alison Quigan can empathize with Gen, the character she will play in the Auckland Theatre Company’s new comedy.

Hearing aids, health issues, planning a funeral – they’re just some of the age-related problems that provide perfect comic fodder for Sir Roger Hall’s latest play, Winding Up. Alison Quigan, who plays the lead role alongside Mark Hadlow, got her first pair of hearing aids early last year and her sore knees put paid to some adventures on a recent European trip.

As for funerals, the 67-year-old says she’s already decided who will sort hers (State of Grace, the all-female team who run a business in Auckland). “I’ve seen some really good funerals they’ve done.”

It’s the 16th Roger Hall play Alison has either acted in or directed. She’s always admired the way the veteran playwright can turn tragedy into comedy. She still laughs at Glide Time, his first stage play from the 1970s, a sitcom about the public service. At the time she was a typist at Massey University. 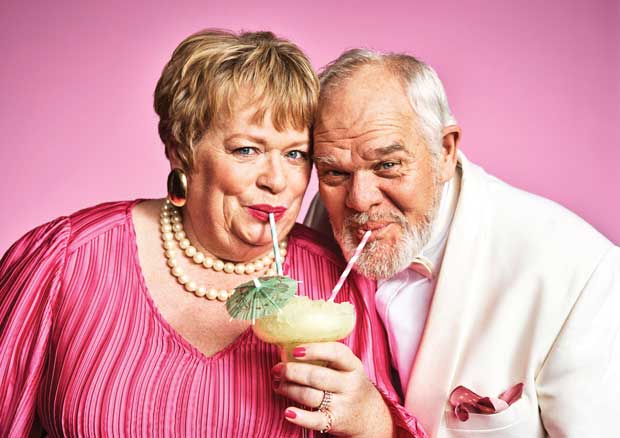 Gen (Alison) and Barry (Mark Hadlow) in Winding Up.

“Oh God, it was as if he’d been sitting watching us,” she says, recalling the drama if a stapler went missing or a heater was moved. “His plays feel like documentaries,” she adds. “We all know someone who won’t wear their hearing aids or who takes them out when they get home.” And when it comes to the obligatory sex scene, Sir Roger Hall realized promise was probably more likely than performance for these boomers.

In reality, Alison is far from winding down. She still works nine-to-five, five days a week as performing arts manager of Auckland Council’s Māngere Arts Centre – Ngā Tohu O Aotearoa. When rehearsals start early in the new year for the play’s February-March performances, it will mean working weekends and evenings as well. “But it’s great to do stuff you’re good at. And it’s such a pleasure to do; it feeds me.”

In Winding Up, Gen (Alison) and Barry (Mark Hadlow) are in their 70s and planning an overseas trip when things start to go wrong. In real life, Alison has recently returned from a trip to Berlin, Florence, Venice and Milan with her 34-year-old daughter, Sarah Graham.
Sarah, the programme director at Auckland’s Q Theatre, suggested they meet up in Italy on her way home from the Edinburgh Festival. “It was just the encouragement I needed,” adds Alison.

She had traveled in the 1970s, before children, and in the 1990s with her former husband but they were usually work-related trips. So, this time around, it was “pure pleasure”.

“Sarah and I work around each other; there’s no pressure as you’d have with a partner or a younger child. It was great. We didn’t have to do things together all the time.” 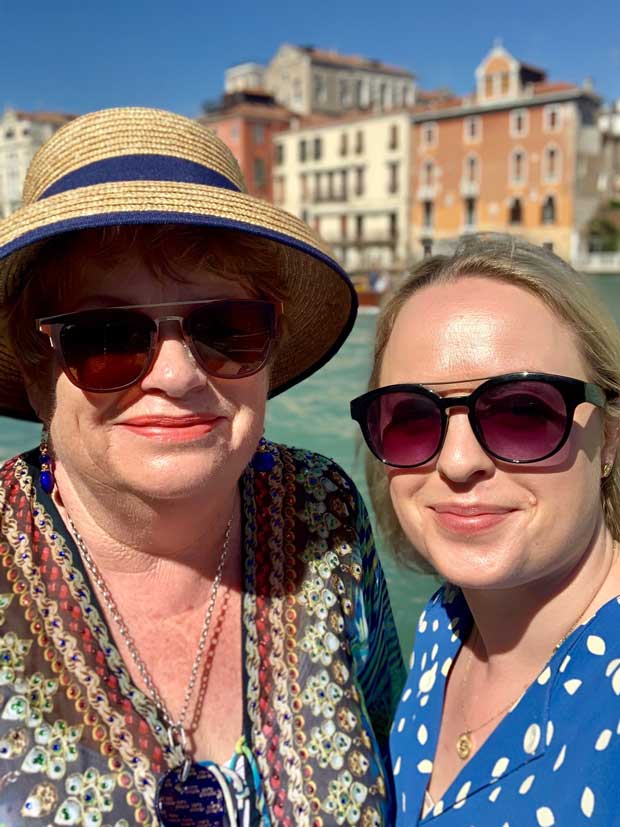 Alison and Sarah in front of Grand Canal, Venice.

Mother and daughter have learned how to respect each other’s space as they share a house in the Auckland suburb of Sandringham, along with Alison’s son (and Sarah’s brother) 27-year-old Freddie. “We all wanted somewhere with a garden,” explains Alison. Keeping up the familial love of the arts, Freddie is a writer who also works in the wine trade.

Alison read the new script on her return, and it made her laugh as she thought about her knees – and bladder. At the Uffizi Gallery in Florence, she recalls how they decided to go to the toilet before they started exploring. “But they were down three flights of stairs, in the catacombs. Then we got back to the ground floor and found out we had to start at the top – anther three flights – and there was nowhere to sit.”

Alison and Mark Hadlow, who last acted together in 2017 in another Roger Hall play Last Legs, have known each other since studying at drama school in 1978. “He was the young, yappy chap from Devonport. I love him and his enormous energy.”

In her 40-plus years of treading the boards, Alison has been involved in more than 130 plays either as actor, writer, director or producer. In 2001 she was awarded the Queen’s Service Medal for Services to Theatre. But this seasoned thespian still has a number of things to tick off her bucket-list. The former artistic director at Centrepoint Theatre in Palmerston North hankers to be cast in another Shakespearean play – she was in the Globe’s production of Henry V – and she wants to write more.

Although she did 12-hour days for six years in her role on Shortland Street as the matriarch Yvonne Jefferies, it’s live theatre that holds the most appeal. “I love bringing the whole production together.” The work she had done for the past six years in Māngere with 40 emerging actors has led to sell-out performances both in Māngere and at Q Theatre. 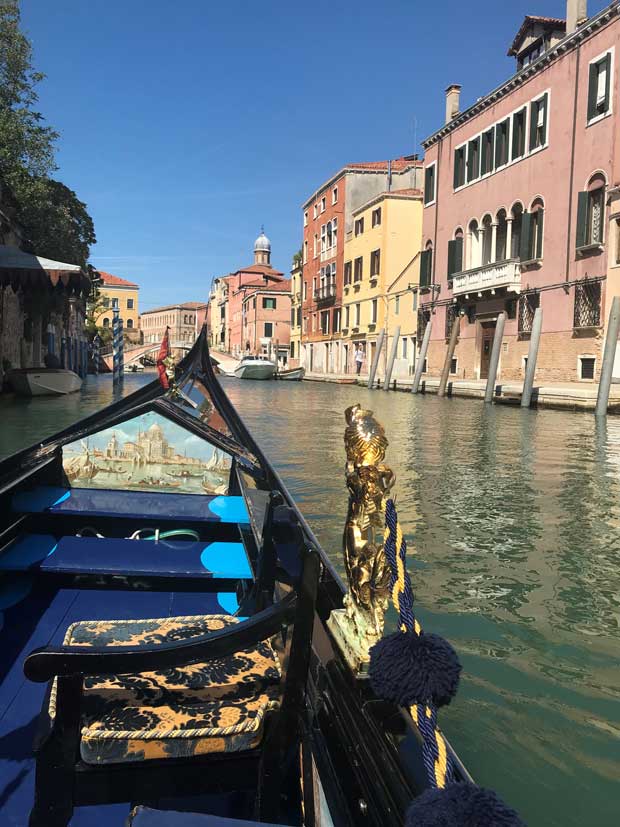 View from a gondola in Venice.

But for now, Alison’s head is still in Venice on the gondola (she was there early in September, before the floods) or Milan which she describes as “fashion on heat”. “Oh, and Berlin, it’s so accessible with the transport system, even with my knees.”

The Auckland Theatre Company’s Giltrap Audi season of Winding Up is from 11 February to 8 March at the ASB Waterfront Theatre, Wynyard Quarter Auckland.

A North Island tour follows it in March, with performances at the Hawke’s Bay Arts & Events Centre, Hastings, the Clarence Street Theatre, Hamilton, the TSB Showplace, New Plymouth, and the Baycourt Theatre in Tauranga. Tickets and info: ticketek.co.nz or 0800 842 538.