Permaculture gardener Kath Irvine shares her years of experience, and the secrets to creating a great garden bed, in her book The Edible Backyard.

I have tried more ways of gardening than I’ve had hot dinners. Chook tractors, double dig, sheet mulching: it’s good to experiment and learn new things. I’ve settled on the following three styles. Each has its pros and cons, so let these be your guide.

Charles Dowding’s no-dig beds are the most expensive to set up but can be grown in right away, and the lack of weeding is a major timesaver, not to mention joyful! The second method, no dig à la Kath, is simply a compost pile that when it’s rotted down becomes the garden bed. This is also a low weed garden. It costs nothing, but there’s a long wait before you can grow in it. It’s cool not having to buy compost in.

The third way — the way I most often use — is greencropping plus rotation, which is sort of in between the two. There’s not as long of a wait as the previous style, nor is it as expensive as Charles’s. I used to think it was only for bigger gardens, but plenty of my customers have made this work in smaller spaces. With the greencrops and the pause for them to grow, the gardens require less fertility, which takes the pressure off compost-making or buying. All three methods grow brilliant vegetables and they’re interchangeable. At any point, you can swap one style for another. If your fortune changes (for instance, with a pandemic and lockdown) and you cannot buy in compost, no stress: sow a greencrop instead — or go walkabout, collect ingredients and try out no-dig à la Kath.

Charles Dowding is a vegetable-growing legend in the UK. He pioneered no-dig market gardening over 30 years ago. His YouTube channel will teach you heaps.

He begins his gardens in a very simple way. Lay wet cardboard all over the prepared area. Overlap pieces generously. If your ground is particularly weedy, go for a double layer. Spread a 15cm layer of compost on top. This deep layer minimises weeds coming through and creates a good foundation for your bed. It’s expensive, but it’s a one-off.

In England’s snowy winters, he can kill off convolvulus in this way. Imagine that! He doesn’t know he’s alive being able to eliminate this tenacious weed so simply. Here in New Zealand, without that long, deep freeze cycle, that’s simply not realistic. Convolvulus (or bindweed as the English call it) laughs at cardboard and 15cm of compost, winding through it at the speed of lightning and infiltrating the bed with its white vining roots.

If you are following advice from overseas, bear in mind the huge difference climate makes. Charles doesn’t mulch. Or rather, the compost is the mulch. This minimises slugs and snails and saves the job of gathering and spreading mulch. He makes most of his compost. Homemade compost left to mature over a long period is far superior to bought compost.

My beds, made this way with bought compost, dried out too much over summer and autumn. They needed far too much water, liquid feeding, and support to grow good crops. There was a distinct lack of life because of the dry environment. However, they were brilliant through spring, greatly reducing the mollusc population, and with the black compost as the top layer, the soil warmed a lot faster. 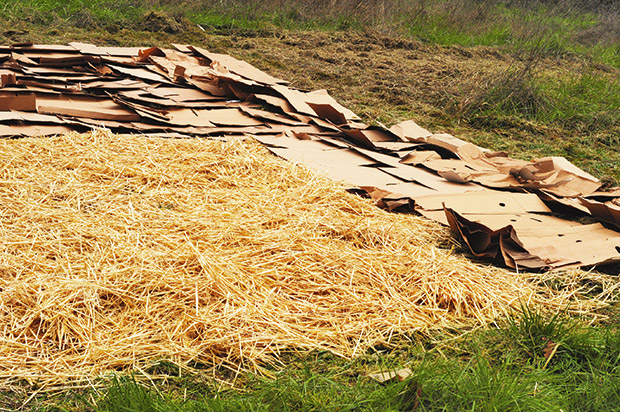 The beginnings of a sheet mulched lasagna garden, with cardboard and hay.

I’ve taken his style and hybridised it. I leave the mulch off from early spring until the rains stop and the weather warms up (as early as November or as late as January here in the Horowhenua). Thereafter, I cover them with mulch to prevent drying out.

To manage these beds ongoing, spread a fresh layer of compost along the top of the bed once a year. This only needs to be a couple of centimetres deep. Keep these beds covered at all times with plants — a good golden rule all round.

Esther Deans pioneered another method of no-dig gardening in Australia in the 1970s. Her impenetrable clay soil inspired her to go up, using the resources she had to make a pile of organic matter that sat on top of her soil.

She started with newspaper, layered lucerne on that, then a layer of manure and compost topped with straw. Repeat these last two layers, then plant it out by pushing aside the straw to get to the compost below. It’s such a brilliant method that it’s been adapted and used worldwide — it inspired Bill Mollison, who with David Holmgren went on to found permaculture. The Esther Deans lasagne bed grew excellent vegetables, but was too expensive to use regularly.

I had a play with Esther’s exact recipe but, while it grew excellent vegetables, I had to buy all the ingredients except the manure, and it was too expensive. More expensive than making one of Charles’s beds.

So I just made one of my compost piles instead and left it to rot down over winter and planted in spring. This is the best way to start gardens on sand and is my favourite way overall. One day when I’m not so busy, I will run my garden thus.

At the time I was following the lasagne gardening method of compost making, alternating layers of fresh green organic matter like grass clippings, vegetable waste or manure, with dry brown organic matter like hay, leaves or shredded paper. I had hit and miss success with this: parts of the compost pile broke down well and some parts didn’t. 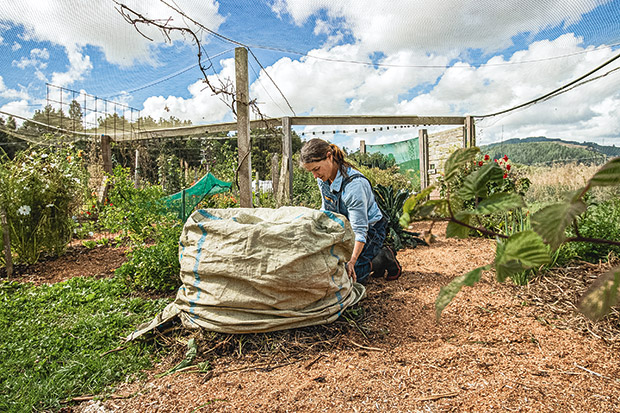 I tried turning it on a regular basis which was a little better, but I really didn’t have the time or inclination to be turning. Then the light bulb went on — what say I mixed it all together before piling it up? Yes! I made the best compost ever. My preferred time to make no-dig à la Kath is autumn, although you can do this at any time. The breakdown takes about six months, longer again in cold weather.

An autumn pile is ready to plant into in spring. You will get two crops from this bed — one after the other, by which time you’ll need to replenish it with either a fresh layer of compost, by sowing a greencrop, or by making another compost pile on top. The only successful crop I’ve grown in a newly-made pile has been pumpkin, which I sometimes plant on top of a spring-made heap — into pockets filled with finished compost. 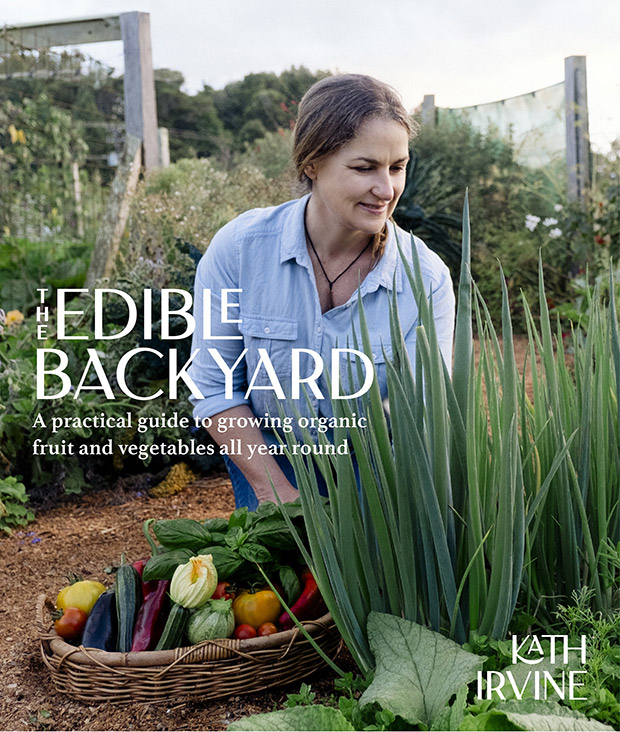