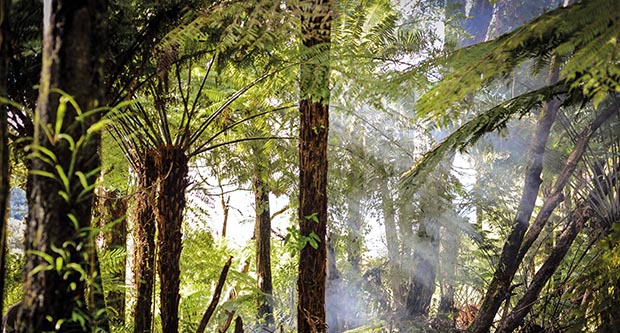 Gathering water is a top priority if trapped in the New Zealand bush, but dining on native edible plants can provide additional  energy and sustenance to survive.

You’d be a bit silly to enter the bush unprepared to face unfortunate circumstances, but if you ever do find yourself having to survive in the wild, it will only aid your situation if you have some basic knowledge about edible wild plants.

While surviving on native edible plants in the NZ bush is unlikely to maintain your weight, they should provide you with the energy and sustenance to survive. The average person can survive around 30 days without food but only three days without water so gathering food should not be your priority in a survival situation.

But if the situation is somewhat longer-term then energy levels need to be maintained and boredom and depression need to be avoided. For these reasons, gathering wild plant foods can be extremely beneficial. 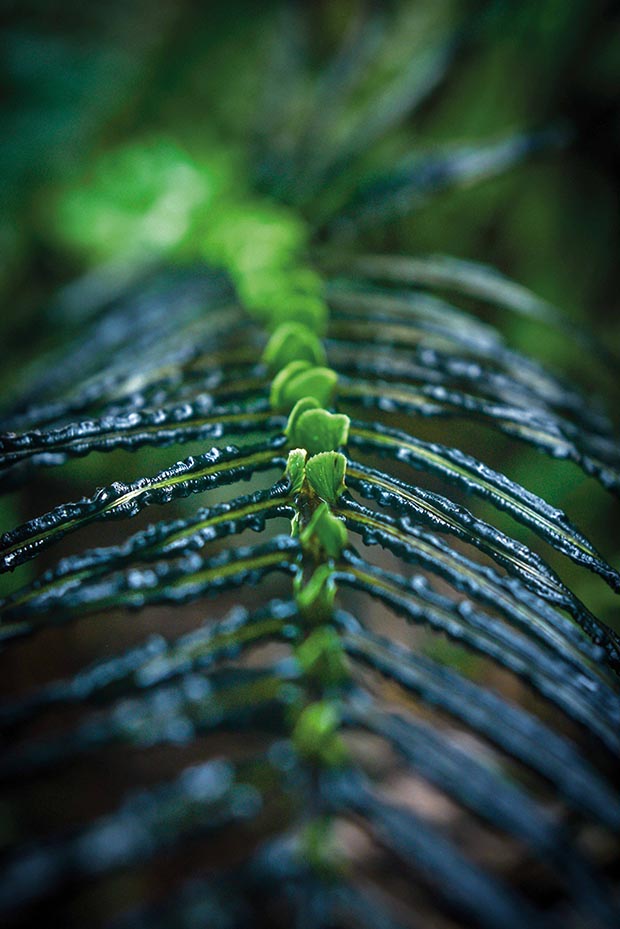 New growth on a fern.

The easiest and most recognisable for most people would be NZ’s native ferns. Some caution is required here as only a few of the many hundreds of fern species are edible, although it appears none are highly poisonous. Even the edible ones are likely to have some carcinogenic qualities but as survival food, this may not be avoidable.

Māori commonly ate the roots of bracken fern (rārahu) and although their preparation methods were quite complex, in a survival situation you could roast them and chew them to obtain the juices. The fibrous part of the root is edible but according to Elsdon Best (author of Forest Lore of the Maori), it’s not terribly pleasant to swallow. The young fronds (the koru-shaped fiddleheads) have historically been eaten but are now known to be carcinogenic. Although the carcinogenic compound appears to be destroyed with cooking, it’s best to avoid this plant unless absolutely necessary and only eat it after cooking.

It’s preferable to obtain the young shoots, or fiddleheads, of the hen and chickens fern (mouku), the common shield fern (pikopiko), the gully fern (pākau), or the hound’s tongue fern (kōwaowao). All of these young fronds are quite palatable when steamed or boiled until just tender. 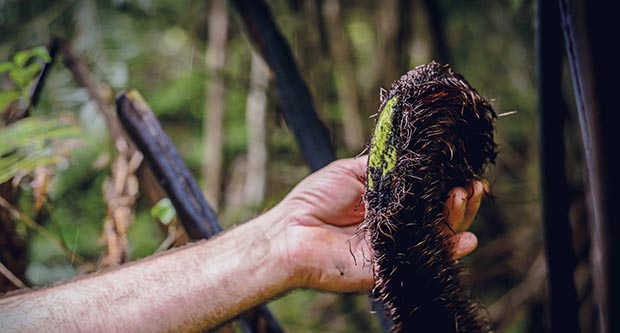 The easily-recognised mamaku (black tree fern) is a useful survival food to know. Māori steamed the mamaku pith taken from the trunk but due to the slow regeneration of the tree, it was only used in times of scarcity or by travellers.

Removing the pith from the trunk prevents the tree from renewing and should only be attempted in a genuine survival situation. According to Andrew Crowe, author of A Field Guide to the Native Edible Plants of New Zealand, it’s possible to remove some of the pith from the frond stems without damaging the tree. These can then be sundried, steamed, baked, or boiled. 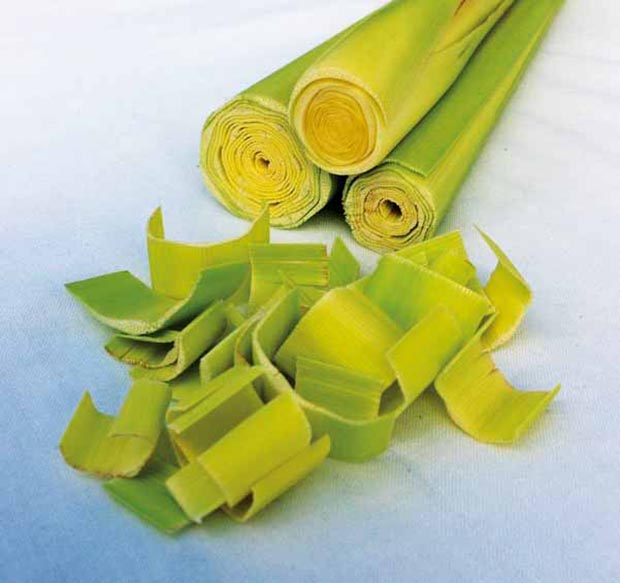 Another tree that grows in abundance in New Zealand is the cabbage tree (tī kōuka). The tender shoots of all types of cabbage trees can be eaten, raw or cooked. The trick is to get the new shoots growing out of the top of the stem, peel away the outer leaves and eat the tender white part, which looks a bit like a leek and tastes a bit like cabbage.

Depending on the season and the age of the shoots, the taste can be fairly bitter but this does improve somewhat with cooking. Due to the year-round availability of this plant, it truly is a great survival food. 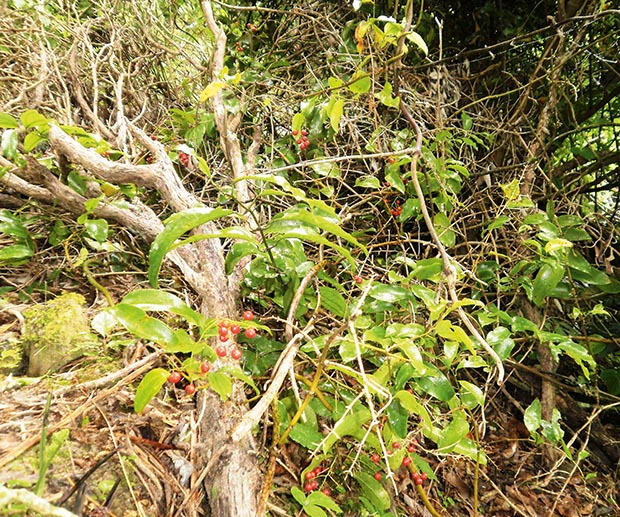 Another great survival food to keep in mind is the supplejack (kareao). The new growth at the end of the vine has a mild similarity to asparagus or green beans and are at their best in summer and eaten cooked. The berries are little red ones and can be found throughout the year. They don’t taste brilliant but do provide some good protein and energy. The tubers and leaves of supplejack are all purportedly edible but not known to have been consumed by anyone on a regular basis. The well-known nīkau palm is not only beautiful, but it also supposedly provides one of the best bush meals in New Zealand. The tender heart or cabbage is a delicacy but sadly removing it will kill the tree and as these special palms take around 20 -200 years to grow it’s highly unethical to remove the heart simply to eat it unless you are facing an absolute dire emergency. This delicate heart of the palm is commonly referred to as the millionaire’s salad.

The good news is that there are parts of the palm you can eat which aren’t a death sentence for the plant. You can eat the cooked immature flowers (before they open) and the berries while still green (before they mature and turn red) without killing the plant. While it’s very useful to have sound knowledge of at least some native edible wild food plants that you may find in New Zealand bush, this knowledge comes with great responsibility and very little practice for most people. When it comes to many of the most common native plants, such as the nikau palm or the mamaku, harvesting the edible part of the plant places it in great jeopardy, and it’s not only humans that threaten their survival. We must be cautious and deeply respect and honour the wonderful native plants that our beautiful country has to offer.

Often this means that we can’t simply go out into the bush to ‘experiment’ with eating the various plants we may have learned about. It’s more a case of gaining a lot of theoretical knowledge and possibly trying a little in practice.

Aside from being unethical, it’s also illegal to harvest living plants from New Zealand’s national parks and reserves, so during non-emergency situations you can’t remove edible wild plants from the forest. However, there are many other places where many of the plants, such as ferns and flaxes, grow – you might even already have some in your own backyard. Removing some of the plant to strengthen your knowledge of wild foods is quite acceptable if it doesn’t harm the plant and if the location isn’t a protected one.

WHY GORSE IS A GREAT PLANT TO ADD TO YOUR PANTRY 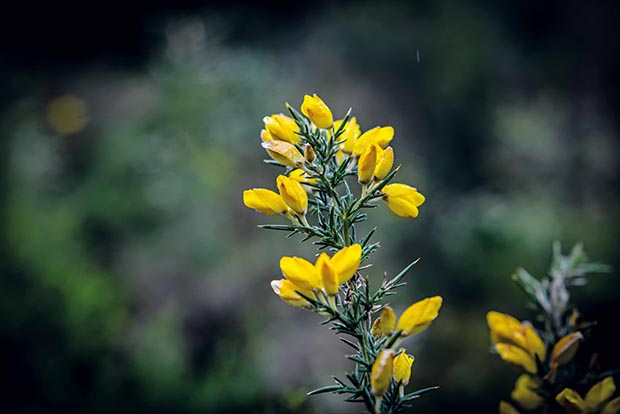 A surprisingly wonderful survival food to keep in mind is the much-despised gorse. Gorse is sadly invading many areas of New Zealand but it also means, depending on your particular survival situation, you may just be able to find it within your reach.

The well-known bright yellow flowers are quite edible and are simply eaten raw or steeped into a tea, tasting somewhat like almonds. Although slightly toxic due to alkaloids, the small level of toxicity is not something to be concerned about in a survival situation. Neither the seeds nor pods are edible.

Another interesting note about gorse flowers is that Bach practitioners often prescribe their essence for individuals who have given up hope, those that have lost motivation. This negative state is something that you want to avoid in a survival situation, so a tea from the bright little yellow flowers wouldn’t go astray.

This invasive and obnoxious weed also serves a purpose in the reestablishment of native forests. In places of abandoned land, nitrogen-fixing gorse has been found to be a useful nursery for native bush regeneration. The newly-growing native seedlings grow through the gorse; as they get bigger they compete for the light, nourishment, and water, slowly killing off the gorse.

BEST OF BOTH WORLDS SALAD RECIPE 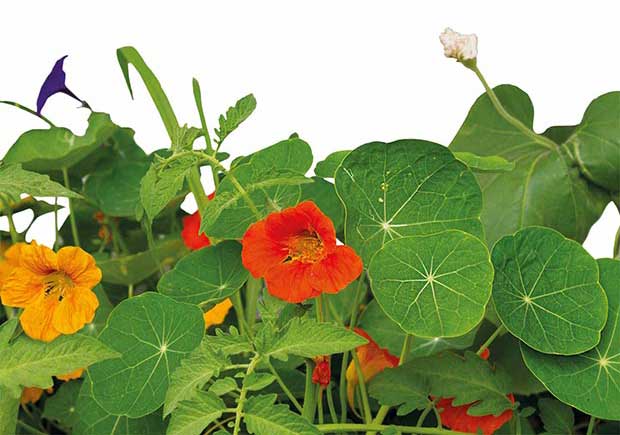 FROM THE VEGETABLE GARDEN

You won’t need to eat large amounts of this salad. The flavours are amazing and varied, and the density of this salad will satisfy your hunger much sooner than an ordinary salad.

The internet is full of excellent resources to learn more about edible wild plants, just make sure you always double (actually triple) check your information. The best book for native edible plants has to be A Field Guide to the Native Edible Plants of New Zealand by Andrew Crowe. First published in 1984, this book is still the bible for people wanting to learn more about New Zealand native edible plants. Find a local wild food group or programme and go along to one of the many wild food workshops offered around the country.

For all sorts of survival information, including wild plant foods, check out www.waypostsurvival.com