40+ things that are poisonous to your dog 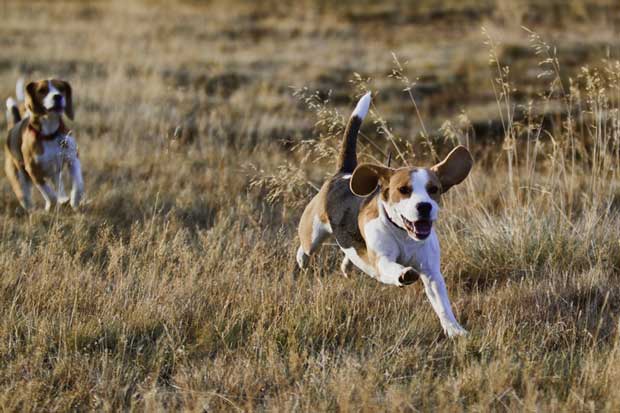 You need to keep your best friend safe from dangers around your home, but some of the most toxic things are sitting on your dinner plate.

When you think poison, you probably don’t think of dark chocolate, sugarless gum, macadamia nuts or cigarette butts. They’re not the kind of thing you lock up in a cupboard to make sure your dog doesn’t have access to them.
You should, because all of the above can be toxic to a dog. Dark chocolate contains caffeine and theobromice in toxic levels; white chocolate has almost none and milk chocolate is only a low dose but keep your dog away anyway.
Some sugarless gum and candy contains an artificial sweetener called xylitol and can cause liver failure and death.

Macadamia nuts cause illness including weakness, depression, vomiting and tremors, but scientists don’t yet know what it is that makes it toxic to dogs. Cigarettes, butts, cigars and even nicotine patches – if chewed – will make a dog quite sick and the stress of being poisoned can be enough to be fatal. However, out on the farm there is even more of a risk for the inquisitive dog. The most common ways for a dog to be poisoned are exposure by inhalation of contaminated air, by application to or through the skin, or by oral ingestion.

The major groups and specific agents commonly observed to cause poisoning in dogs are: 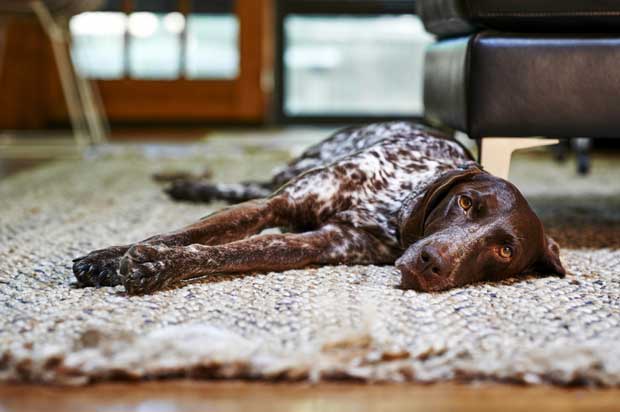 RODENTICIDES
Most rodenticide poisonings are the result of careless placement of baits, overuse of baits, failure to discard poisoned rodents, and malicious poisonings.

Anticoagulant rodenticides
The most commonly used rodenticides are used by block owners, professional exterminators and for agricultural rodent control.
Clinical signs: There is a latent period of 2-5 days before clinical effects are observed. The poisoned animal may be found dead with no history of illness as a result of haemorrhage in vital areas. Less acute cases exhibit depression, lethargy, pallor, anaemia, and weakness. Haemorrhaging is often noticed through a bloody nose.

Strychnine
It is the primary toxicant in malicious poisonings. Strychnine is used as a pesticide. Commercial formulated baits are often pelleted and dyed green or purple.
Clinical signs: The onset of strychnine effects occur within 10 minutes to two hours after ingestion. Affected animals appear nervous and apprehensive, developing a tense abdomen and saw-horse stance. This progresses to violent, intermittent seizures. Death occurs in one to two hours after onset if not treated.

Sodium Fluoroacetate (1080)
Dogs are very susceptible to poisoning by 1080. 1080 is used to control rodents such as rabbits and possums. Dogs are usually poisoned by eating contaminated rodents.
Clinical signs: There may be an initial period of restlessness, followed by hyperesthesia and vocalization. Repeated defecation and urination are characteristic. Dogs die of convulsions or subsequent respiratory paralysis within 1-4 hours of eating a lethal dose.

Cyanide
Extremely poisonous chemical compound. Used in New Zealand in the form of a paste to kill possums, and is usually used in conjunction with a lure of flour or jam. Dogs are usually poisoned by eating a contaminated possum carcass.
Clinical signs: The poisoned dog may be found dead for no apparent reason. Cyanide is very fast acting and in most cases, without an immediate emetic the dog will die before veterinary attention can be sought.

INSECTICIDES
Intoxication has occurred from a variety of compounds. Exposure is usually the result of improperly stored or disposed of preparations, spilled mixtures or containers left open where dogs may have access to them. Dogs have been poisoned by applying preparations intended for another species, an overly aggressive control program for internal/external parasites, and by oral ingestion of insecticides such as snail bait. Other common insecticides include sheep dips, flea powders and flea washes.
Clinical signs: Each animal may not exhibit all possible effects. Early in the poisoning symptoms are uneasiness and apprehension, progressing to licking, chewing or swallowing motions (associated with increased salivation) and muscular twitching around the face and eyes. As the poisoning progresses abdominal pain, cramping, vomiting, defecation, end frequent urination commonly occur. Wetness around the lips, froth and slobbering are noticed. Muscular twitching progresses to whole body muscle fasciculations that become evident over the back of the animal. Death occurs within minutes to hours after onset of clinical signs and results from respiratory failure.

Herbicides
In addition to toxicity from arsenic herbicides, dog toxicity is also occasionally observed from the phenol containing herbicides and from the chlorate salts. The low cost of both these materials makes them popular with local agencies for weed control. No specific antidotes are available for these chemicals.
Clinical signs: With a few exceptions, clinical signs associated with herbicides are non-specific and include loss of appetite, vomiting and diarrhoea, progressive muscular weakness and possible death.

Fungicides
Although the various solvents used for currently employed fungicides may be toxic, by and large the chemical fungicides themselves are of limited hazard. Methyl bromide, captan, dinitroorthocresol, carbamate fungicides and organotin materials are potentially toxic.
Clinical signs: Usually similar to those observed in herbicide intoxication, but may include greater involvement of the nervous system. 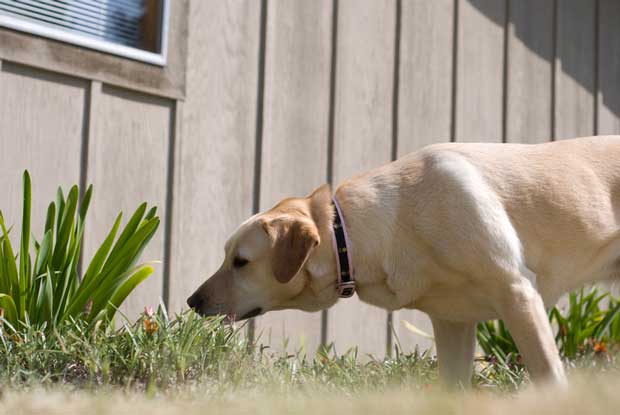 POISONOUS PLANTS
The accessibility of a numerous variety of plants around households, coupled with the tendency for dogs to play with and chew on foreign objects presents the constant hazard of pet poisoning due to the existence of poisonous plant materials. Since the dog has a physiology basic anatomy similar to humans, plants that are toxic for human beings should also be considered toxic for dogs.
The specific plant, amount eaten and the part of the plant consumed are vital in evaluating the potential toxic effect.
Numerous toxic principles and syndromes are associated with contact or ingestion of a wide variety of plants.
Some of the most commonly observed plant poisonings in dogs are those producing mechanical injury, digestive tract irritation, and specific toxicity resulting from consumption of algae, mushrooms and fungi.

ENVIRONMENTAL CONTAMINANTS
Household Products
The potential for household products to cause toxicity in dogs is significant because dogs are often confined to the home. The products that can cause issues include cleaners and disinfectants which contain strong acids and alkalis.
A variety of household compounds are potentially toxic:
dry cleaning fluid
fertilisers
furniture polish
matches
mothballs
laundry bleach
perfumes
shampoos
window cleaner
Clinical signs: These can range from vomiting and diarrhoea to pneumonia.

Antifreeze
Ethylene glycol is found in antifreeze (up to 95%). It is odourless, colourless, and sweet tasting water-soluble liquid.
Clinical signs: The first clinical stage occurs 30 minutes to 12 hours after ingestion and is characterised by vomiting, depression, abnormal righting reflexes, generalized or focal seizures and coma.

Fuels
Fuels consist of a variety of hydrocarbon compounds. They are widely used in household and commercial products, such as charcoal lighters, cooking fuels, lighter fluid and fire kindlers. Kerosene, diesel oils and house heating oils are included.
Clinical signs: Depending on the fuel, level of exposure and time since exposure. Exposure is an emergency. Signs may include irritation to skin and mouth, diarrhoea, coughing, tremors, depression, seizures and coma.

PREVENTION OF POISONING
• educating yourself is the most effective method – prevention is better than cure.
• Always keep poisons out of reach of both children and animals, either on a high shelf or locked away in a cupboard.
• If you suspect your dog has been poisoned, get your dog to a vet as soon as possible. If you are able, take with you the poison container, or a sample of the suspected source of poisoning and/or vomit or diarrhoea in a clean plastic container or jar.

Our thanks to the Christchurch City Council for allowing us to use this article. 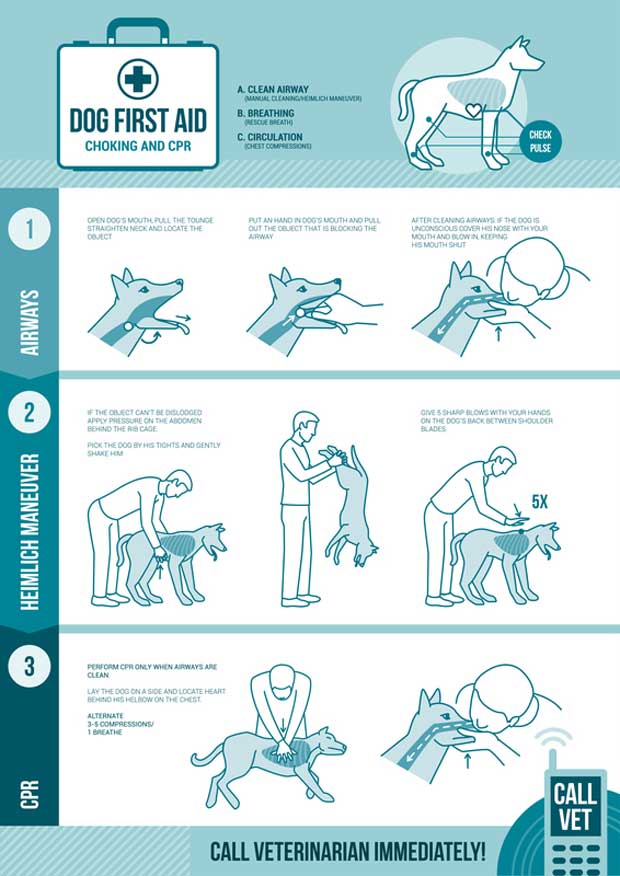 GIVING CPR TO YOUR DOG
You hope the day never comes, but there are many cases around the world where dogs have been saved because their owner or a passer-by gave an animal CPR.
* don’t attempt the kiss of life if you have reason to believe that poison is involved.

If you cannot see breathing movement place your ear on the dog’s chest and listen for a heartbeat or take its pulse. If the heart has stopped within the last minute or so but you think the dog is not yet dead, apply heart massage and artificial respiration together.

Artificial respiration
1. Open the dog’s mouth, grasp its tongue and pull it well forward clear of the back of the throat. Wipe away any mucus or blood. Remove any obstruction, including its collar or restricting items.
2. If the animal has fluid in its throat or is a victim of drowning hold it upside down by its rear legs for 15-30 seconds.
3. If dog is still not breathing, start artificial respiration. Close its mouth, place your mouth over the dog’s nose and exhale to force air through its nose to the lungs. Watch the dog’s chest for the lungs to inflate. Remove your mouth, and repeat the cycle about six times a minute. You may need to carry on for 30- 60 minutes, until the dog is breathing by itself or is pronounced dead.

Heart massage/compression
1. If you cannot hear a dog’s heartbeat, strike its chest sharply with your fist once or twice in the region just below the dog’s left shoulder. If the heart is still not going, apply heart massage.
2. Place the dog on its right side on a firm surface. Put the fingers of one hand on each side of the chest over heart area and compress it firmly but not too hard. Then release the pressure. Repeat 70 times a minute.