5 reasons your chicken may be limping 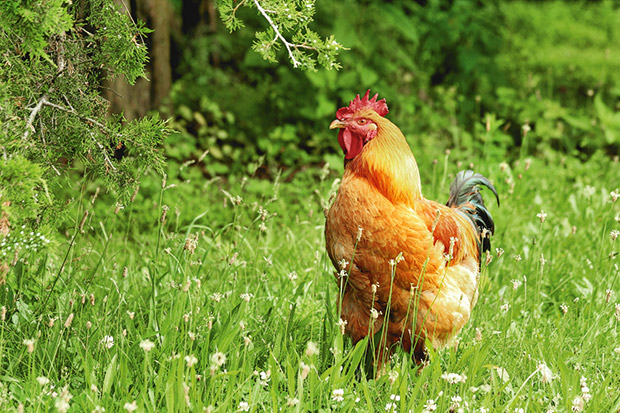 You may think a limping bird means an injury to the foot or leg, but it can be a symptom of other, odder causes.

The cause of a bird’s limp may be easy to see, such as a swollen leg or an infected cut. But often, there are no obvious signs, and it can take some detective work to discover why a bird is limping.

Initial signs could be one, or more, of the following:

■ favouring one leg while moving around;
■ dragging one leg;
■ walking crookedly or wobbling;
■ splayed legs, either one to the side or one forward and one back;
■ twisted toe or toes curled inwards or outwards;
■ listless and not moving around much;
■ sitting back on the hocks, unable to stand;
■ standing with one foot raised.

Limping can be due to a wide range of factors, such as the obvious physical causes:

■ lump or swelling on the legs or toes;
■ weeping/open sore;
■ raised scales;
■ cuts and wounds;
■ birds jumping off high perches or nest boxes;
■ children, pets or other livestock accidentally stepping on or crushing birds;
■ dropping birds from a height;
■ catching birds by the legs;
■ faulty or poor equipment, eg getting a leg hooked up on wire;
■ string or thread from feed bags getting wound around a toe or leg;
■ wet litter around waterers or muddy conditions outside, causing bumblefoot.

But other, less obvious issues can cause limping, including:

Limping in newly-hatched chicks may be caused by:
■ holding eggs in storage too long before incubating them;
■ low humidity during hatching inside the incubator;
■ slippery brooder surface.

A common cause of lameness is an improper diet, such as:

■ failure to feed enough of a quality, nutritionally-balanced feed, 130-160g per day per bird (depending on weight);
■ supplementing a nutritious feed with low-nutrient whole grains or kitchen
and garden scraps;
■ feed that doesn’t meet the specific needs of a bird’s age or species. 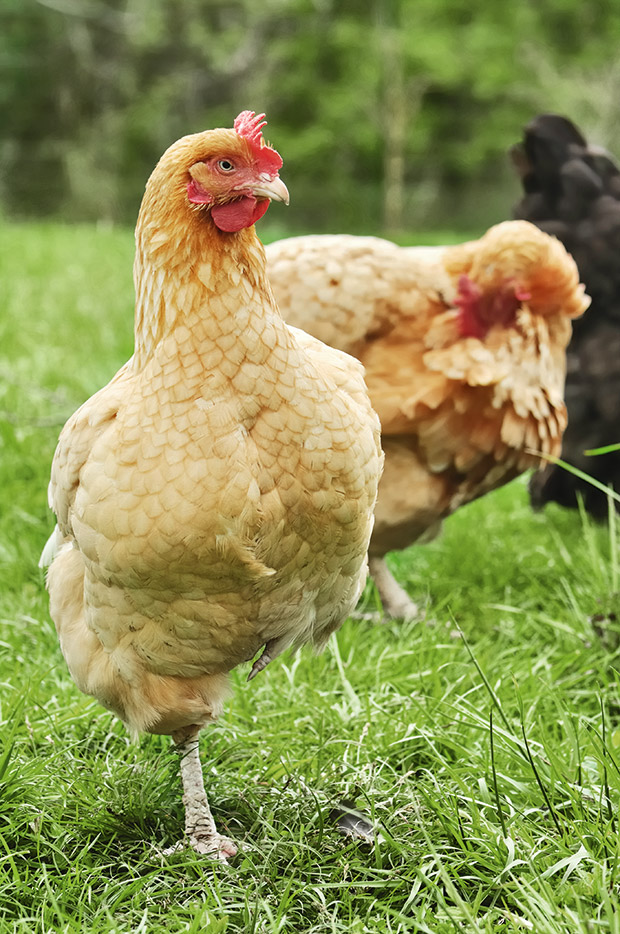 Growing birds are at risk of dislocating their hocks if they are low in minerals.

If a bird doesn’t get the right diet, especially when it’s young and growing, it can lead to vitamin and mineral deficiencies. Birds receiving low-nutrient feeds that make up 50 percent or more of their diet are at the highest risk. Kitchen scraps and whole grains shouldn’t be more than 10 percent (13-16g) of a bird’s daily ration.

Supplement breeding hens and roosters with extra vitamins and minerals, above those normally supplied in a layer feed. It can help egg fertility, and means the developing embryos receive the correct levels of minerals and vitamins that they need for good development.

Rickets
Cause: a shortage of calcium
Most at risk: young chicks and growing birds
Result: can cause soft, bendy leg bones

Perosis (dislocation at the hock joint)
Causes: shortage of calcium and phosphorous; injury
Most at risk: young chicks and growing birds
Result: tendons slip out of the groove at the head of the bone because the bone hasn’t formed properly

Symptoms vary, but often the bird will seem depressed, refuse to eat, lose weight, become wobbly on its legs, and use one or both wings to help keep its balance. 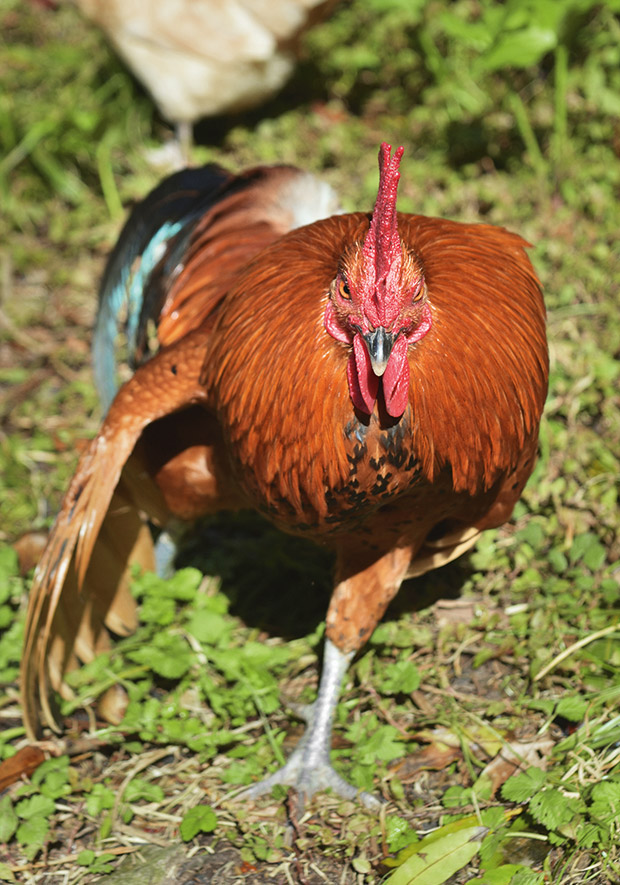 A bird that has eaten something toxic may use its wings like crutches to maintain its balance.

Garden weeds and wild plants produce toxins that may affect a bird’s nervous system and its ability to move. Initial symptoms can be quite subtle or even go unnoticed, such as inflammation of the digestive tract. Depending on the quantity eaten, toxins can cause wobbliness, convulsions, paralysis, or death. 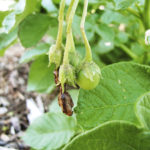 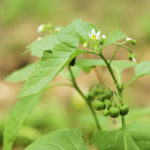 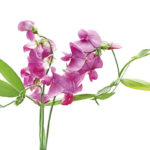 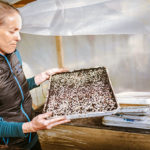 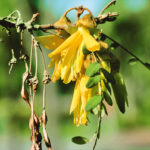 All can be toxic, leaving birds unable to move normally, or paralysed. Fertilisers and paint flakes containing lead can also cause a lack of co-ordination and sometimes death. Nb: some coccidiostats in poultry feed, eg Monensin, are toxic to turkeys and can cause lameness and death.

More stories you might like:
Video: On the farm with New Zealand's largest flock of Valais Blacknose the 'cutest sheep in the world'

Different diseases can have different signs of lameness.

Bumblefoot
This is one of the most common reasons a chicken will limp. It’s a bacterial infection that often starts from a puncture wound in the sole of the footpad. Birds can also be infected when a clod of mud or manure adheres to their sole or a toe. It can form a hard ball that keeps the skin underneath soft and moist, allowing bacteria through the skin.

Once the infection spreads to joint fluids, it’s hard to cure. If you spot a bird limping, it’s important to check for signs of bumblefoot quickly and treat it immediately. Clean out the pus from the swelling, administer antibiotic spray to the wound regularly, and keep the wound clean and dry. Use an absorbent pad and cover with vet wrap as a bandage.

Marek’s disease
There are different forms of Marek’s disease. The most common is a viral disease seen in young birds (10-25 weeks), which they catch in the first 1-2 weeks of life. Lameness in birds over one year old is unlikely to be caused by Marek’s disease as birds build up antibodies as they age. 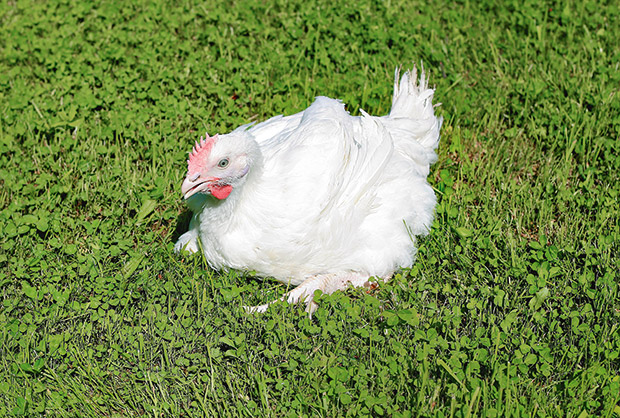 Birds affected by Marek’s are often paralysed, with one leg pointing forward, one leg back.

A temporary limp in a young bird which resolves in a couple of weeks without treatment may be another form of Marek’s once known as ‘range paralysis’.

Marek’s can have other symptoms such as a dropped wing, a bent/twisted neck, or bleeding skin lesions.

Viral arthritis (Tenosynovitis)
This affects the hock joints, usually in heavier, growing birds. The bird may stand on one leg holding the other up. The hock joint will feel hot and possibly swollen.

Staphylococcal arthritis
This bacterial disease causes hot, swollen hocks, full of fluid and pus. It often affects old heavy roosters but can also be caused by bumblefoot. The bird will need penicillin or a broad-spectrum antibiotic from a vet.

Scaly leg mites
These parasites burrow under the scales of the legs. The scales become raised, bleed, can become infected, and eventually may cause lameness. Coat the legs with a greasy substance such as petroleum jelly each day to suffocate the mites and help old scales to fall off.

Wet, muddy ground, faeces-covered runs, and slippery surfaces can all cause lameness if a bird gets wounded or slips and sprains a joint. Birds can get caught on equipment, in netting, and clefts of branches, catching a leg and spraining it as it twists to get free. Ramps into a coop should have a non-slip surface with spaced cleats. 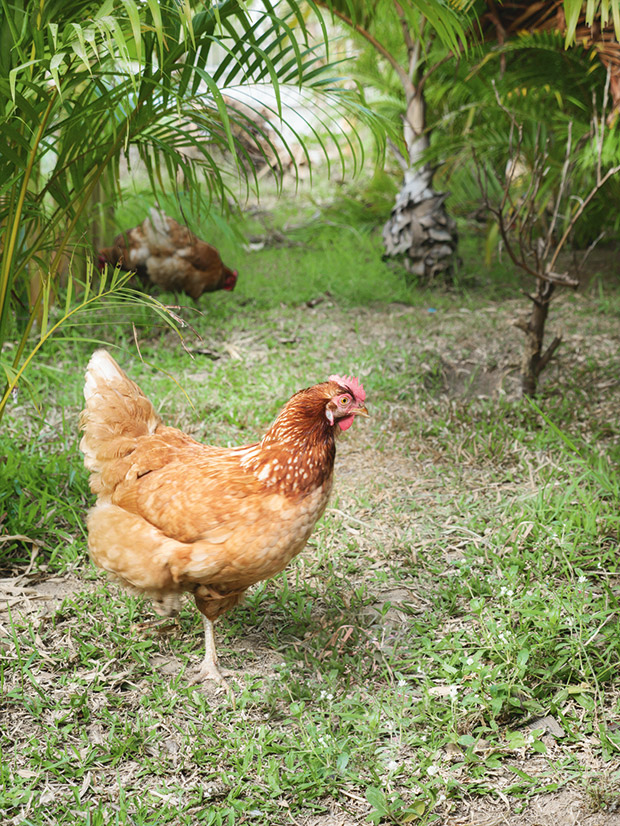 Don’t allow children or pets to chase poultry. Waterfowl are at even more risk as they tend to have weaker leg joints and ligaments. Keep poultry away from larger livestock so they don’t get stepped on, especially around feeders and troughs.

Fine strings, such as those pulled off when you open feed bags, can cause damage by twisting tightly around a leg. It can often go unseen, resulting in the loss of a toe or foot if it’s tight enough to cut through the flesh.

The way eggs are cared for before incubation can mean chicks are weak or unable to stand after hatching. Low humidity during incubation can cause weak, crippled chicks. 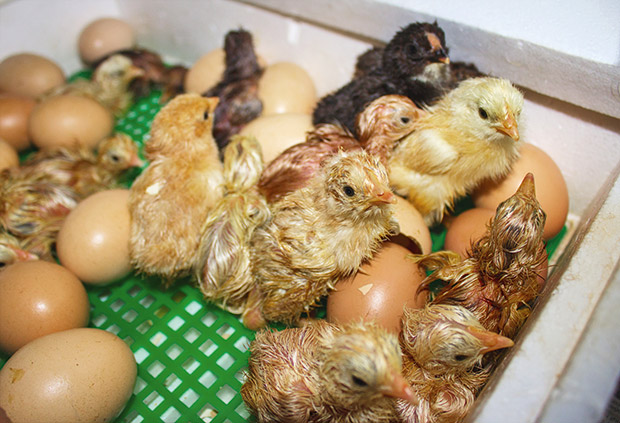 Slippery surfaces in hatching trays and brooders can cause splayed legs in newly hatched chicks. Genetic problems may also cause lameness. It may not be apparent at hatching but gradually becomes worse as the chick grows. These birds should be euthanised as they won’t recover.

6 THINGS TO KNOW ABOUT TREATING A LAME BIRD 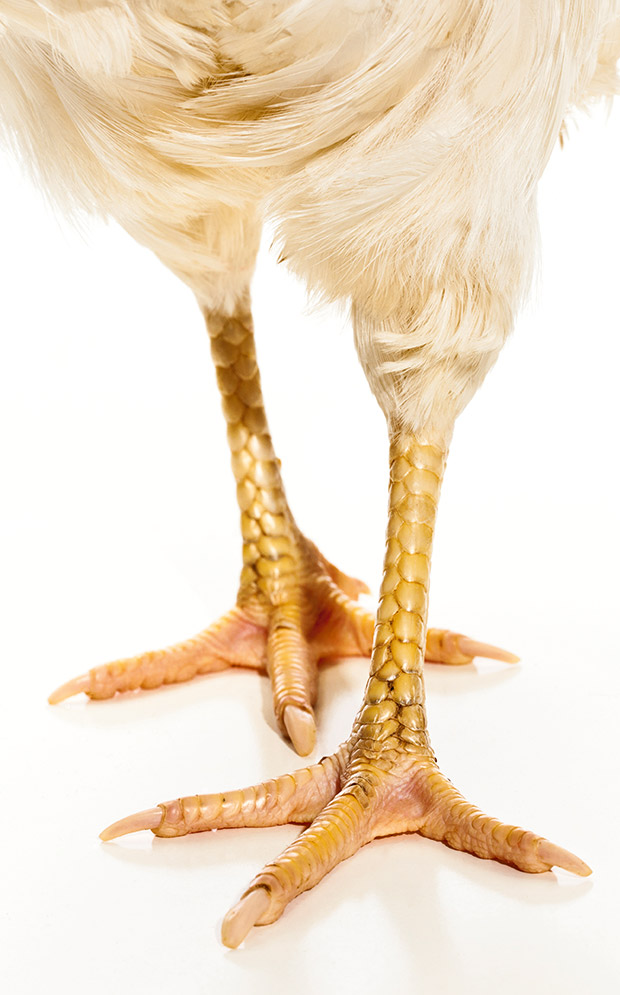 ■ Remove the bird from the flock. Keep it in a small, dry area with adequate food and water.
■ Look and feel for a possible cause – ring your vet for advice if you’re unsure.
■ If it’s something obvious such as bumblefoot, treat it for one week. If there’s no response to treatment, it’s best to cull the bird as it’s unlikely to recover.
■ Don’t return a bird to the flock until it’s walking properly. An injured bird will be picked on by the others and maybe injured by them or reinjure itself as it tries to escape.
■ Splayed legs in young chicks can often be corrected by making a temporary splint using sticky tape or plasters for a few days.
■ It may be possible to fix a broken leg, depending on how badly it’s broken and where on the leg. Talk to your vet. 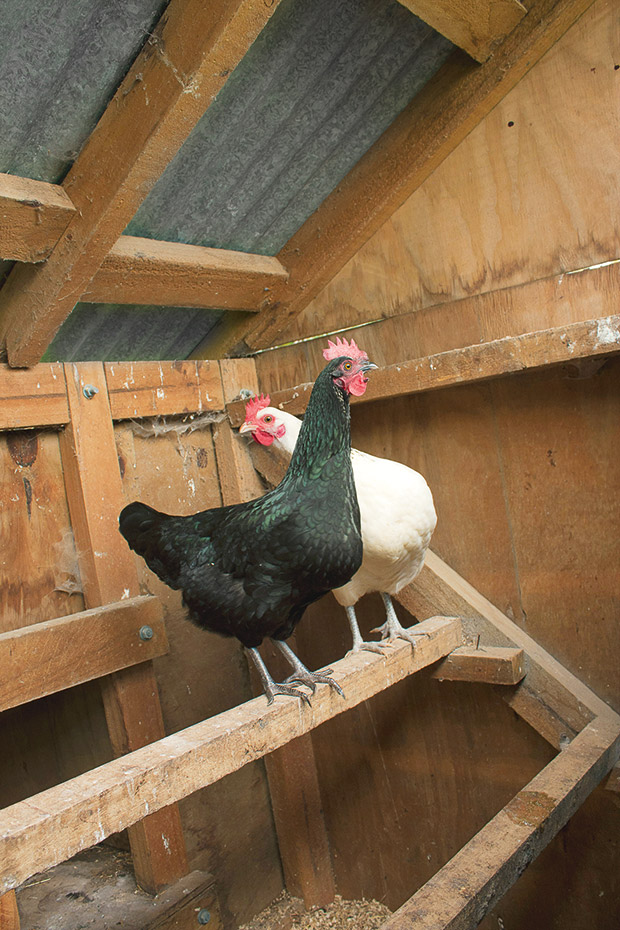 1. Make sure there are no rough or jagged edges in the coop, which could injure feet.
2. Have the right sized perch for different sized birds – bantams have much smaller feet than heavy breeds and need thinner perches.
3. Perches need to be smooth with any edges rounded off so nothing can catch on the feet.
4. Have perches low to the ground (40cm or so), or make a ladder arrangement, so birds don’t have to jump down too far and risk injury.
5. Keep coop litter dry. Try to cover entry and exit points with gravel or bark chips to help eliminate mud puddles, and to wipe their feet clean.