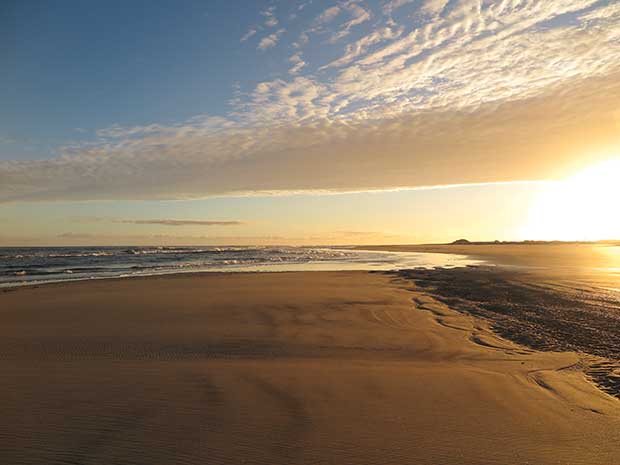 Discove a region where the sunshine hours are unrivalled and the beaches are shared with sunbathing seals.

It’s just over the hill but feels so far, far away. The distance from Nelson to Takaka is a matter of 100 kilometres but Golden Bay is a destination rather than a stop on the way to somewhere else.

There is one road in, one road out. The 791-metre Takaka Hill is the gatekeeper to this area which, every year, vies with Nelson to head the sunshine hours’ leaderboard.

That hill deters the easily carsick, the readily impatient and the apt to be indecisive – but it rewards the persistent with pure waters, pristine beaches and hours of Vitamin D-topping rays.

There’s something else here too; a gritty yet gentle spirit that attracts the like-minded. Artists, creators of craft and the flower children of the past have put down roots. Some say hippies, others alternative – whatever the name, their spunk gives Golden Bay its soul and that million-miles-away feel. 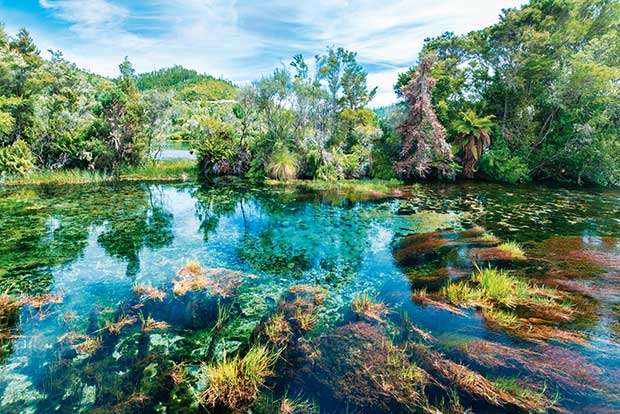 Just outside of Takaka, and gushing from the ground at 14 litres per second, are the largest freshwater springs in New Zealand.

Te Waikoropupu Springs are also among the world’s clearest. Pupu Springs (as they are known locally) are heavenly. Ripples in the waters give moments of clarity, before blurring like a teal finger-painting.

This is a sacred place to be treated with respect. The waters of Te Waikoropupu represent the lifeblood of Papatuanuku (Earth Mother) and the tears of Ranginui (Sky Father) and are protected by guardian spirit Huriawa. In the past, the waters were a place of ceremonial blessings and used for healing. There is no food, drink, swimming or smoking allowed. 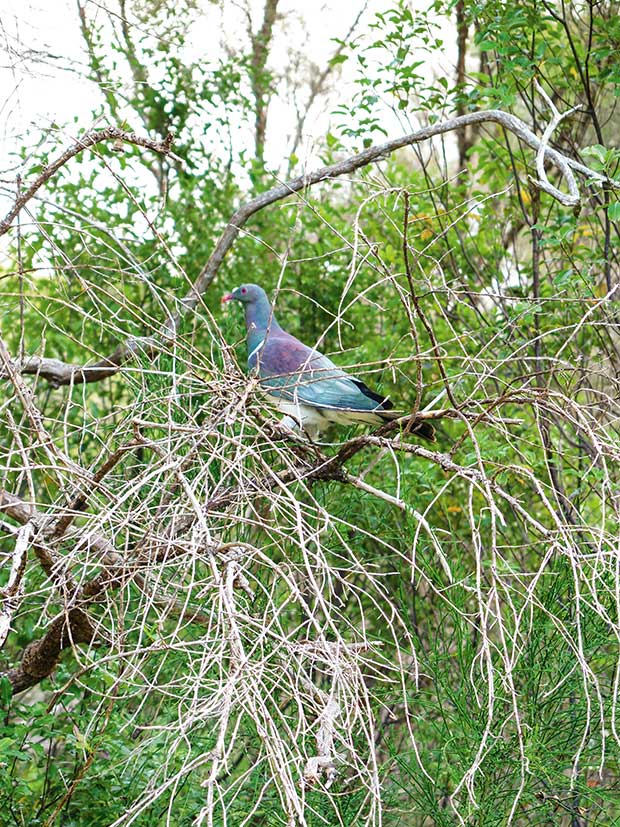 Treat the springs and bush as if it were a church – touch nothing and take nothing but photos.

There is a loop walk through the manuka and kanuka bush. The track curves alongside the river and Dancing Sands Spring, with bridges and clever design ensuring visitors leave the bush and waters undisturbed. The walk takes about half an hour.

As for the springs? Be prepared to linger.

The springs are a 10-minute drive from Takaka. 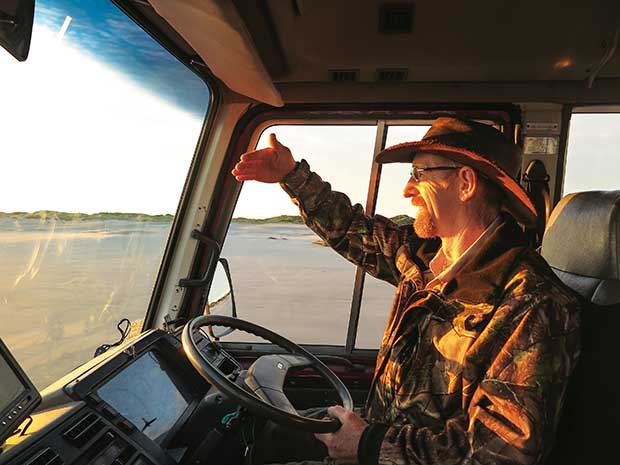 There’s a feeling that settles over visitors to Farewell Spit. It dances around in the salt-flecked ocean air and sits in hair and clothes like the tiny grains of white sand. It’s almost a weightlessness, the freedom of being one of few humans here, and the awe at being at the mercy of nature.

The tides are king and rule the spit, moulding the dunes with their force. The winds can be brutal but, in a happy trick of nature, in winter they blow less often.

Farewell Spit is the most heavily protected place in New Zealand.

That’s because the ecosystem is like no other and is home, in spring and summer, to several thousand gannets in the only sea-level colony in the country.

There are more than 90 recorded species of birds, from swans and red knots to oystercatchers and penguins. It is not uncommon to see seals sunbathing on the beach while their young shelter at nearby Wharariki Beach. While life flourishes on the spit, it is also occasionally lost. Whale strandings are a tragic regular occurrence. In February 2017, 416 pilot whales were stranded – one of the largest strandings ever recorded in New Zealand.

Only the first four kilometres of the ocean beach and two-and-a-half kilometres of the Golden Bay side are open to the public. Further access is permitted by authorized workers or Farewell Spit Eco Tours only.

What started 70 years ago as a mail-delivery service to the lighthouse is now Farewell Spit Tours, a popular tourism venture.

Paddy Gillooly was a motor mechanic looking after the tour buses when he was offered a chance to step into guiding boots. He mulled it over. “And here I am, in the best job in the world.

I love dealing with happy people; I love sharing this place. People can never explain exactly what makes it so special. It’s just that feeling.” 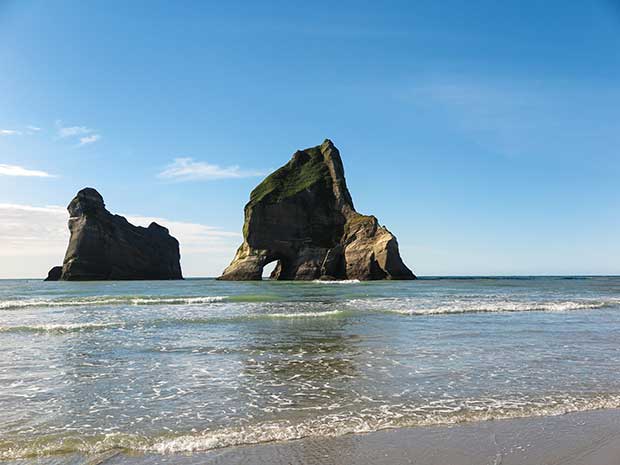 Paddy takes guests to the sand dunes, the seal colony, Fossil Point, the white sand ocean beach and the lighthouse which was built in 1869. 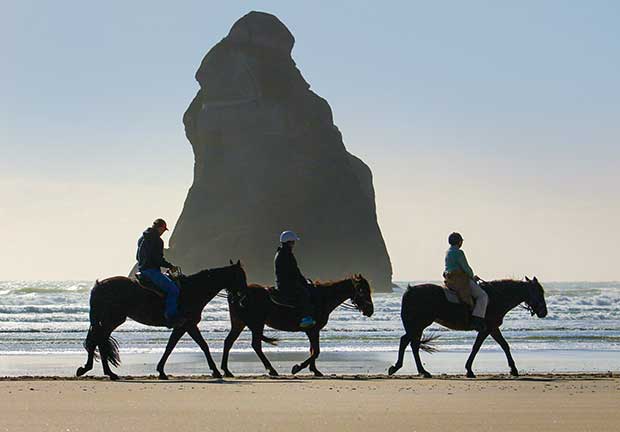 Pamela Forbes is convinced that she’s living in one of the country’s best regions, but just in case she happened to forget, visiting horse enthusiasts remind her daily. “You’re so lucky,” they say, as the horses beneath them clip-clop across white-sand beaches on the edge of Farewell Spit, around mine shafts and gold-mining relics, or through Pamela’s dairy farm and private native bush.

“Golden Bay is diverse. We have national parks, beautiful swimming beaches, the spit – it’s all here on our doorstep.” Hearing how beautiful the visitors find the surroundings is music to Pamela’s ears – and has been since she and husband James purchased Cape Farewell Horse Treks three years ago.

Their dairy farm was adjacent to the horse-trekking business and they’d come to know and love the horses.

When the business was for sale, they couldn’t bear to see anyone else look after them.

The 26 horses all have big personalities and Pamela and James say there is one to match every riding ability. No experience necessary. Advance bookings are recommended during the peak summer periods, but outside summer, a phone call the night before should be fine. 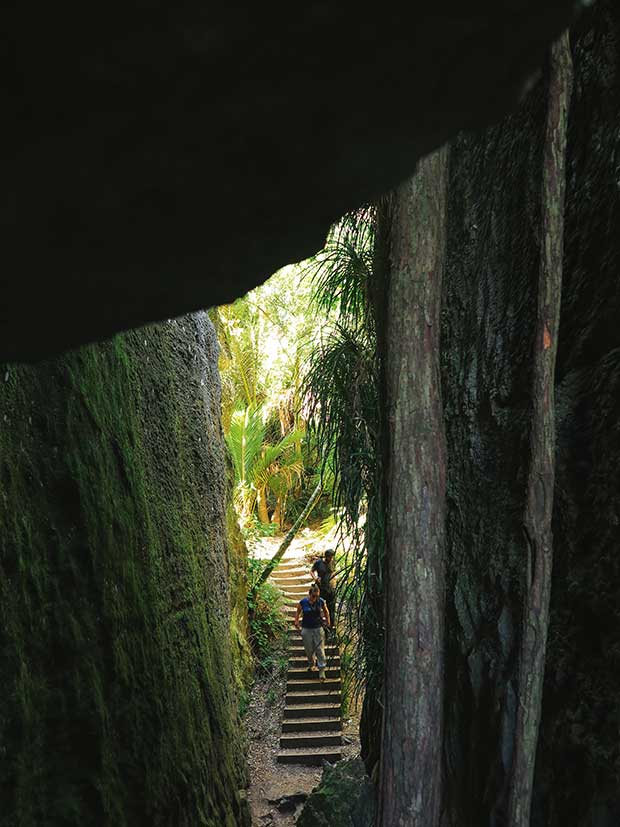 A visit to The Grove is a perfect way to tick off many of Golden Bay’s unique experiences at once. Enormous limestone rocks, moulded and carved by water over an unthinkable number of years, sprawling Northern rata perched on the tops of the rocks, an intriguing Jurassic Park-like landscape with nikau palms so tall they put a crick in the neck, and panoramic views over Golden Bay… no wonder it’s a favourite with locals.

This gentle 20-minute walk is 20 minutes from Takaka.

The Grove is also one of the first South Island locations of Project Crimson, the charity that funds the protection and regeneration of native rata and pohutukawa.
Drive towards Pohara Beach from Takaka.

There’s a signpost on the main road marking the location. 14 Rocklands Road, Clifton. One of many natural marvels found on or within Takaka Hill (also known as the marble mountain) is the Ngarua Caves. Discovered in 1884 after a scrub fire, the caves are a weird and wonderful spectacle, with millions of stalactites dripping in slow motion from the limestone roof above.

There is a 300-metre walkway that creeps through the cave system and 45-minute guided tours are held on the hour from October to May. From Queen’s Birthday weekend until October, guided tours operate only on weekends and it is essential to call ahead.

Look out for the moa bones (including an entire skeleton) found in the dark depths of the cave – and for locations used in The Hobbit films. Feeling claustrophobic? Head to the small café, which has a great view towards Kaiteriteri.

For more domestic travel inspiration, order your copy of The Insider’s Guide to New Zealand 2020.

The Insider’s Guide to New Zealand is the country’s leading, independent travel guide specializing in six new regions. This collector’s annual introduces readers to interesting people to meet, things to do, places to go and food to eat; don’t leave home without seeing the country.