It’s probably a given when you live in the bush that you shake your gumboots before you poke in your feet. Certainly the weta and spiders that have sporadically tumbled from my shoes of a morning have ensured that the check is a daily ritual, but when a recent citified visitor politely left her sandals on the porch before entering our house for afternoon tea, it never entered my head to pass on the shoe-shaking tip.
Her screams on departure made me wish I had. “That’s a possum paw,” two-year-old Vita informed our still-shrieking guest as the offending object lay on the grass where it had been flung. Our puppy, drawn to the commotion, pounced on this offering and trotted off with it, sort of flapping farewell from his mouth.
We found Pax late last year at the Kaitaia market where, beneath a sign reading Original Maori Kuri Dogs, a gaggle of people had stopped to peer at a crate of pups. A scarecrow of a man, smiling gappily, was reinforcing his dogs’ genetic line to the crowd. “First dogs in New Zealand. Original Polynesian dogs. Very rare.” 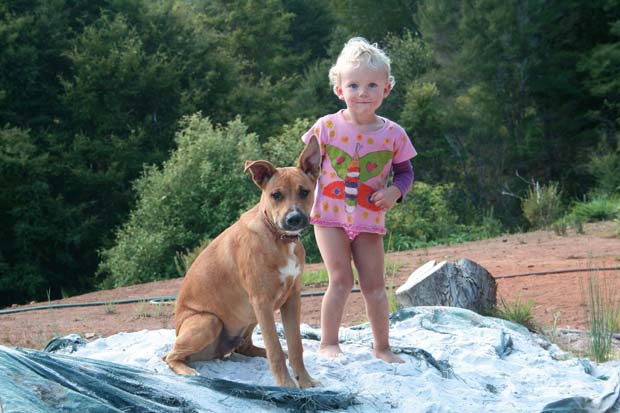 Vita couldn’t have cared less about the dogs’ pedigree. A dog lover from way back, she was suddenly feeling short changed with the wooden dog on a string she’d been dragging around home. “Want one,” she declared, pushing pudgy fingers into the tangle of warm, furry bodies. James and I studied the puppies’ mother as she licked us beguilingly. “She seems a nice, middling sort of size,” I suggested.
While a quick Google check revealed the Maori kuri or Polynesian dog had in fact been extinct for a century, we supposed there was a chance some strand of that canine’s DNA could have ended up in the fat golden puppies sleeping at our feet. Anyway, I’d been waiting a long time to gain a dog and so, for a princely $30, Pax the pup changed hands and entered our lives.
According to the puppy-training book I consulted, it was vital that the dog learned he came last in our family’s pecking order, a position Vita reinforced with gusto.

Crooning “little darling” in a syrupy voice that we learned not to fall for, she was constantly caught sinking her teeth experimentally into any canine appendage, testing his ears and tail for their quality of attachment or attempting to stuff him down the compost toilet. As Pax grew, however, a certain jockeying for rank began, accompanied by noisy howls or pitiful whimpers, depending on the victim of the moment. Constantly snapping “no biting” to both parties as we broke them apart, James and I ruefully questioned the wisdom of combining toddlers with puppies.
And then, suddenly, Pax seemed to get it, ceasing his habit of locking jaws on malicious little limbs and emerging as an extraordinarily tolerant (somewhat foolish) dog as he followed Vita around, blinking in surprise as she unexpectedly tossed secreted fistfuls of sand in his eyes or whacked him on the head amidst gleeful cackles. Although her torturous ways are thankfully diminishing, unfortunately for Pax other ordeals still await, including a course of electric shocks as soon as he’s deemed old enough to undergo kiwi aversion training.

Given that we’re surrounded by hectares of native forest, it goes without saying that we’re also encircled by possums so, when a professional possum trapper recently asked if he could work our land, we welcomed him warmly. Averaging 350 possums a week, he emerged daily from the bush with a sackful of plucked fur and a possum for Pax. Most dogs gulp these delicacies down quick-smart but Pax has revealed himself to be a rotter in the truest sense of the word, depositing his carcasses in the bush and emerging with them only once the stench of decay is so high that every fly within a 50-kilometre radius can detect it. Licking Vita after his fetid feast, his love seems more like revenge.

In the next post, hot running water arrives on the land and Polly finds cling film has its place in a builder’s apron.