6 inspiring ‘man caves’ and ‘she sheds’

We’ve all heard of ‘man caves’, but there are so many inspiring garden buildings, including the ‘she shed’. Check out these beautiful projects from NZ and around the world, most made on a small budget and out of recycled materials. 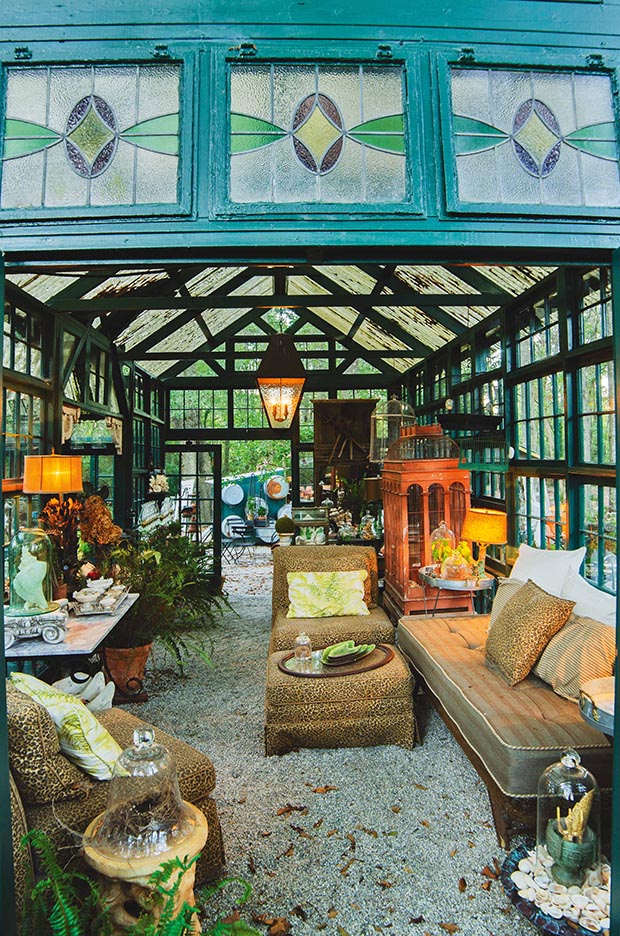 You’ve heard of man caves, but this is a ‘she shed’, as described by US magazine Country Living. This particular ‘shed’ belongs to US garden designer Susanne Hudson who lives half an hour’s drive from Atlanta in a little town called Douglasville. It’s 56m² and made out of 139 salvaged wooden windows and five French doors that Susanne spent three years collecting. Susanne is a woman who really loves old windows and making a stunning impression. She has a deck in another part of her garden which is walled in by antique 1.8m high church windows, and an open air lounge complete with working chandelier. The avid gardener has a huge collection of hydrangeas and says she loves to use her shed for potting up plants when it’s fine, or she’ll curl up in a chair with a book if it’s not. While it’s a glamorous-looking shed, there’s plenty of practicality to it. The floor is covered with crushed shells – some covered with carpets – and there’s an extra wide door in one wall so she can easily bring in her wheelbarrow. 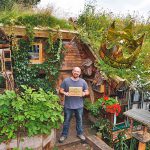 The ‘West Wing’ from Berkshire has been crowned winner of the Cuprinol Shed of the Year competition 2016. 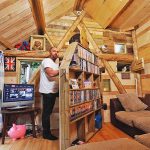 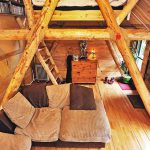 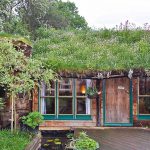 This was an eight year labour of love for Kevin Herbert, who won the incredibly popular UK Shed of the Year in 2016. The West Wing, as he calls it, has a green roof growing wild plants and the building materials are mostly recycled, including old wooden pallets. Because of its steep angle, Kevin had to be crafty when it came to the roof so he lined it with wood, then cut up 400 milk cartons to hold the green roof. Each one has a hole in its base and a layer of shingle in the bottom so water can drain out and run off.
The plants and dirt in them total two tonnes. Inside are three rooms: a main living area with a sleeping loft in the roof, a secret door behind the bookcase to a playroom for his children, and a workshop. 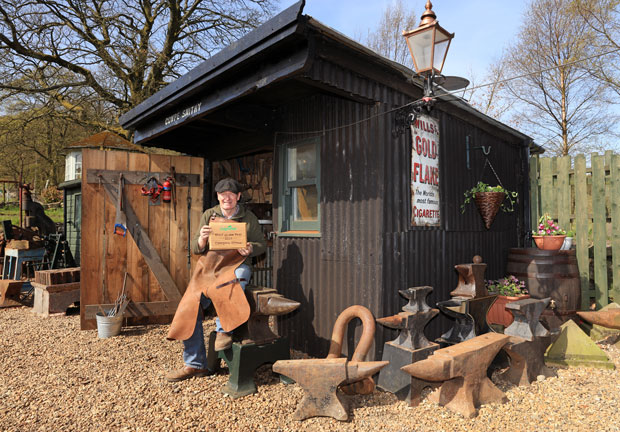 Robin Sharples always wanted to be a blacksmith. Ill-health prevented that from happening, but four years ago he decided to build his own ‘smithy’ so he could make tools, candleholders and other knick knacks. He styled it after a traditional iron and timber workshop from the 1920s and used salvaged corrugated iron from old air raid shelters. It’s now filled with and surrounded by Robin’s collection of anvils, 70 in total. Since winning the Workshop & Studio category in the UK Shed of the Year 2016 contest, Robin now hosts professional blacksmiths who run introductory courses for locals. 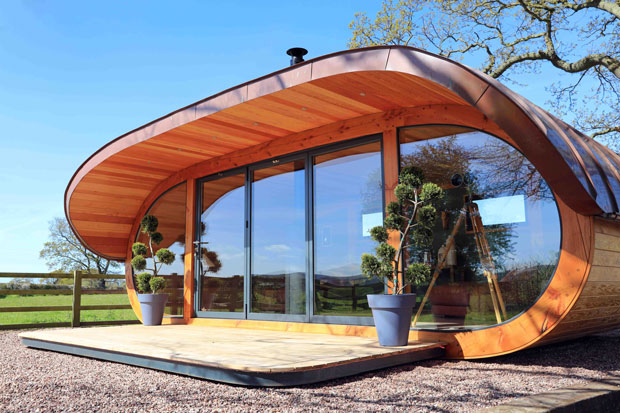 This architecturally designed ‘shed’ weighs five tonnes but it can still turn a full circle, following the sun throughout the day. It sits on a giant bearing and is turned by a 3-phase electrical motor with double-reduction gear box using a handheld controller. The walls are lined in Douglas fir, the floor is ash, the frame is timber and the roof is copper. Since winning the Unique category in the UK Shed of the year, owner Bryan Lewis Jones has started a company to produce similar rotating sheds. When you work from home, often the only space left for an office is usually slightly bigger than a desk and often cold. For Andrew Shaw, it was his laundry. When family friend and architect Richard Wright came to visit, he found Andrew toiling in grim conditions. “He was working almost in the dark, it was a very unfriendly place to be, and their little daughter was wanting to be with daddy so working in the house wasn’t convenient.” Richard proposed an outdoor studio, right on the 10m² mark so it didn’t need council consent, and built out of recycled and surplus materials to keep it as economic as possible.

More stories you might like:
Goodbye mortgage, hello remote living: Buying an untamed 6ha block was this couple's ticket to self-sufficiency 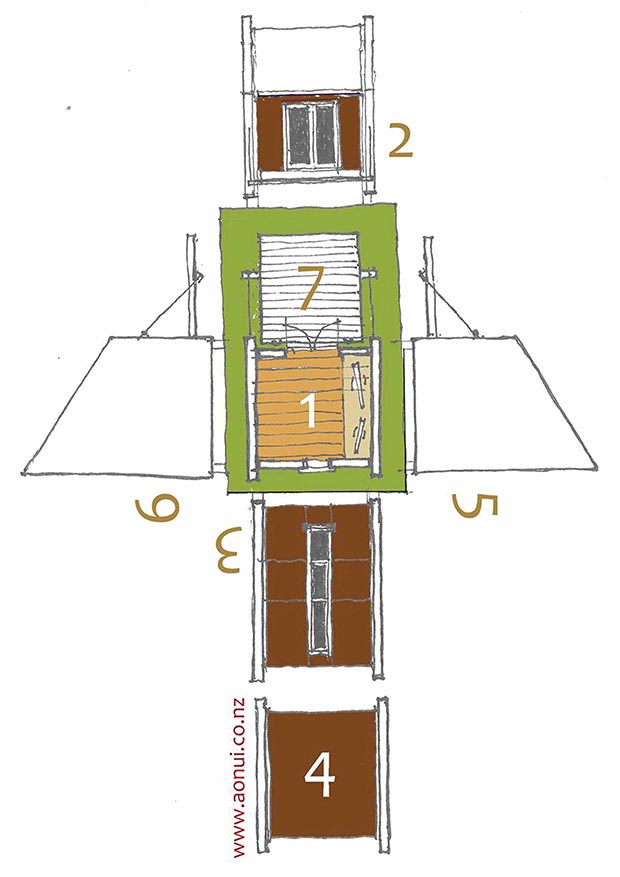 “We looked around at previous jobs we’d done and the leftover materials that my other clients didn’t need. We reused some old stuff, like the rods on the drawbridge came from an old 19-century warehouse in Wellington. We went to an engineer and devised special eye bolts that could attach rods to the building without creating leaks. The window at the back of the studio was left over from another job, the roofing came from my son’s house.” What Richard designed was a beautiful box that could be partly-built off-site, under cover, by Andrew and his dad, then delivered as a flat pack on a truck and put together in a day. The studio includes a loft with a bed for visitors, and plenty of room for Andrew and his work. 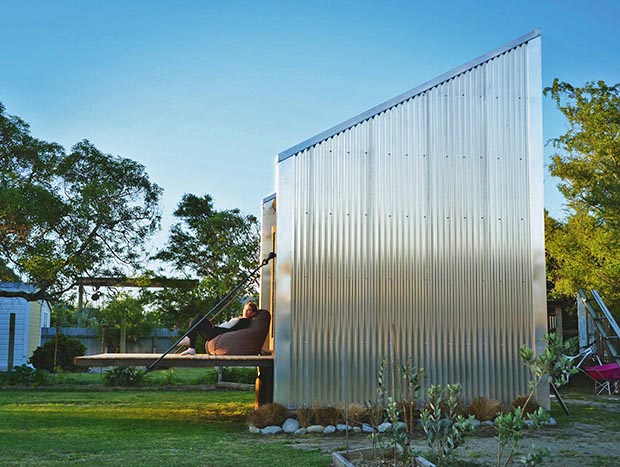 “I think we saw it as object in the garden, like a folly – it’s not just a shed. We wanted something that looked good from every direction, like a piece a garden sculpture. Sheds can be grubby, not very sophisticated. As soon as you get into pole framing and steel framing, there’s no joy, they’re functional. We wanted to show you can do it in a nice way.” It’s so nice, the studio won an award at the 2016 Wellington Architecture Awards in the small project category, the judges making particular note of a key feature: the drawbridge. When the drawbridge is up it provides a security barrier, and allows the lawn around the studio to continue to grow. When it’s down, it’s a deck, but also a table or seating area when the family is entertaining. 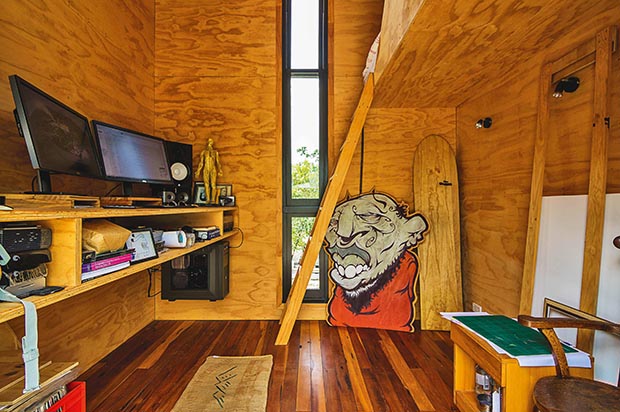 The fact the studio didn’t need consent helped make it a great project says Richard, compared to what he sees as the overly restrictive building consent process now in place for larger structures. “Local authorities have lurched from not being careful enough to being, in my opinion, too prescriptive and creating time delays and limiting creativity. If we’d needed consent for this, the drawbridge and iron rods would have had to have an engineer’s certification. One hundred and twenty year old wrought iron wouldn’t be in their code and probably disallowed, but you don’t have to be a rocket scientist to see it is stupidly strong. “The studio is well designed and code compliant in other respects but I saw that by not needing consent, we could have some fun and strike a blow for affordable building.” 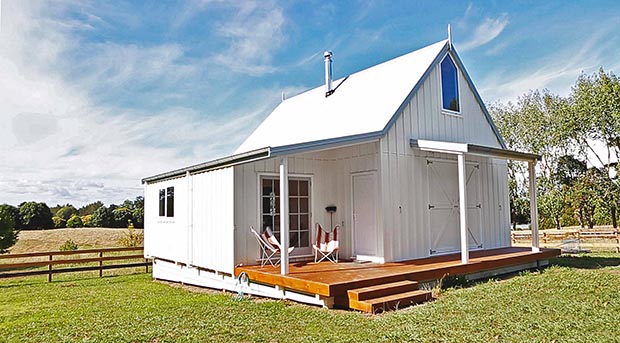 Owner: Patricia Clay, potter
Design: Customkit, based on the Durham kitset
Size: 94.16m²
Where: Auckland
Video: www.customkit.co.nz – click on ‘Building of the month’ and choose May 2015

Potters are usually quite rustic people, and often end up tucked away in a garage or a dark shed. That’s where long-time potter Patricia ended up for 20 years until she finally decided it was time to have her own space. “Potters need space because you’ve got kilns, you’ve got wheels, you’ve got pots drying and going through various processes, you’ve got buckets of glaze and tonnes of clay lying about. I’d been working in a little shed, a tiny dark space.” 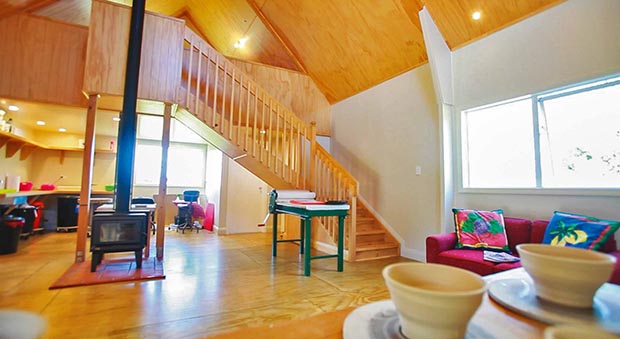 There’s nothing dark about the beautiful studio she has created out a Customkit kitset barn. It’s lined in wood and includes a bedroom in an upstairs loft, and a woodburner that heats the entire space. “I did have a very good builder, William Biggelaar – he was the one who transformed it into this beautiful space inside. It’s a very peaceful little building, it has a lovely aura about it.” Patricia has been potting for over 30 years and says she just has to go out and be in her shed most days. “I have times where I get caught in making things, you can’t just do it for half an hour or an hour. You’ve got to wait for the right dryness and that can take a while. If we’re preparing for a firing,
I go in there every day for a few weeks to get it done, but even if there’s nothing, I go in there anyhow, it’s lovely to be there to read a book or just to fiddle with something.”