Meet the stars of Pecking Order 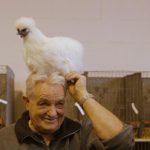 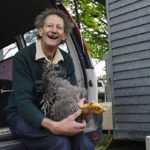 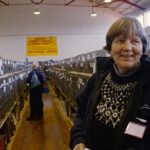 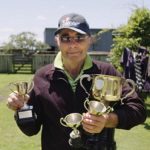 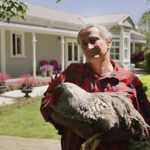 The 2017 National Poultry Show is a celebration of NZ’s oldest poultry club, and its members are all stars of a chick flick with a difference. It’s easy to find out if someone is really serious about their poultry. All you have to do is ask them how many birds are in their flock. You’d expect Christchurch Poultry, Bantam & Pigeon Club president Mark Lilley to have a big flock, but even he immediately gets a case of PA (poultry amnesia).

Mark is one of the stars of the movie Pecking Order, out in cinemas nationwide now, and it’s taking some getting used to for a man who spends most of his life working on a farm, raising three children with wife Jen, and tending to his flock under the hazelnut trees on their block on the outskirts of Christchurch.

“It’s something really weird to us, something most of us never thought we’d be involved in. Suddenly going from this thing which we thought would be on TV late at night or early in the morning before Praise Be, to suddenly realising that we are going to be on the big screen. Seeing yourself on a poster, seeing yourself on the back of a bus.

“I never thought I’d end up in a flipping documentary. How did this happen to someone like me, I’m a country boy who shows chooks!”

The movie, by renowned NZ documentary maker Slavko Martinov, follows the Christchurch club through a tumultuous 2014-2015 when a crisis threatened the club’s very existence.

“I was close at times to leaving. Even now at times I can come home or open up an email and say ‘I’m over this’. But I’m pretty bloody pig-headed and have stuck around to see what happens and to make sure club is around for the next however many years.”

While it might seem odd to agree to have a documentary film crew recording your club having heated arguments with one another, Mark says the members agreed to it because they hoped it might help keep things in line.

“Some of us were thinking that things might smooth out and off we’d go again, but it was just too far, it was past that. Things like the 80-year-old asking the 70- year-old to step outside into the carpark.

“The funny thing is, when you stop and think about it, similar conflicts are going on throughout New Zealand, throughout the world all the time. I think that’s what Slavko wanted to show: this is people, real people doing real things.” Rhys and Mark with their breeding birds.

Fortunately, the club survived and this year it celebrates a big milestone, turning 150, and hosting the 2017 National Poultry Show where NZ’s top breeders get together to compete. The club’s monthly meetings are also quite different.

“We’ve changed it since everything happened and there are new people in the management team. We encourage people to bring in birds, we’ve had lots of different birds through our meetings, from paradise ducks to pukeko. All sorts of poultry that are good poultry and ones that have got faults. You have to have the ones with faults so people can learn – I’ve taken birds in there with faults so everybody can learn.”

Mark started rearing fancy poultry just over 10 years ago, when he impulsively bought some Barnevelders at the annual Rare Breeds Auction in Christchurch, then entered them – and did well – at his first A+P Show.

“Suddenly I thought, like a fool, this is easy, anyone could do this! And it’s just sort-of grown from that really.”

His goal, like so many others who get into breeding fancy poultry, is to breed the perfect bird.

“…which will never happen and that’s the stupid part about it, it’ll never happen. But you drive yourself to do that, and when you sit down at night and think about it, you’re never going to do it but you still go out the next day and try to do it. Some people say you’re nuts, but everybody’s got their own little obsession.”

Being part of Pecking Order means a lot of people will get to see all the stunning heritage breeds in NZ and hopefully will help bring new members along to learn about poultry.

“We’ve got to get people to fall in love with chickens and come along and get hooked, just like some of us other silly people,” he jokes. “There’s a big push at the moment for people to have poultry and we’ve got to have places those people can go and ask questions and talk to people face-to-face rather than just jumping on the computer and googling.” Mark (left) and son Rhys in a scene from Pecking Order.

There’s also nowhere on Google that can help you with preparing to be the star of a movie. Mark and Jen talked with the movie’s director Slavko Martinov to try and prepare themselves.

“He said you’ve got to be prepared, in the position you’re in, that you could be taking calls from all over the world. And I said pardon? And he said you’ve got to take notes with you, in your pocket so that if someone asks a question and you need something to look down at or to look up the answer, you can look it up there and then. I said nah, nah, you’re being silly. He said it’s going to happen, this is big. And I said nah, nah this is a just a poultry documentary. And he said this is big! You’re not going to be able to keep up with it.”

Filming of Pecking Order finished almost two years ago, but Slavko is still a regular visitor to his favourite poultry club.

“We had a meeting on Monday night and he brought his girlfriend with him and we all sat down and had a huge laugh and a chat. He’s an incredible guy.” Sarah with some of her flock.

The Bunton family started with four hens. Now it’s a flock of Araucanas for her mum and Partridge Wyandotte bantams for Sarah. Many poultry breeders carefully pick and choose what birds become parents, but Sarah’s regime is a little more random.

“They kind of breed themselves,” she laughs. “Stuff happens, I’ve got some crosses around. I’m probably more into them for the pets really rather than showing.”

Chickens aren’t allowed in the house, but the odd one has made it inside.

“I slept with one in my room once, he went to sleep I think, and then he crawled into the bedhead and took a pooh, and then crawled back into bed. I thought that was pretty smart!” 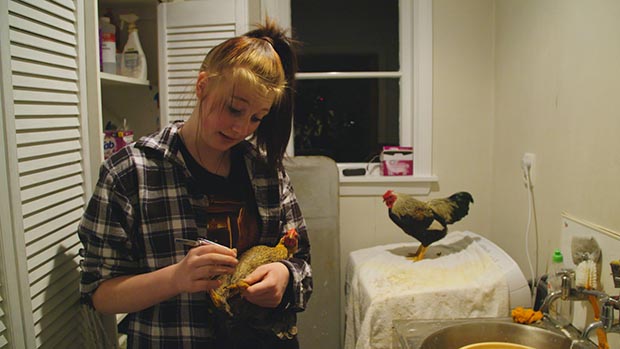 Checking a bird for faults.

The feathers on Sarah’s birds are delicately edged in black like someone has hand-painted each one with a fine-tipped brush but she says she’s looking first for the best bodies.

“It’s good to have a good pattern, but if you don’t have a good body type you’re going to lose there.”

The Papanui High School student says she came in for a little flack when the movie trailer first showed back in February – “oh gosh, how embarrassing!” – but says since then most people have been “pretty cool” about it.  She says she can’t imagine a life without chickens in it.

“They’re cool to have around and it’s just weird thinking ‘I’ll go buy some eggs in the supermarket’ because you’ve always got eggs. Going to buy eggs is just bizarre really.” Preparing birds for a show, including removal of rogue feathers. 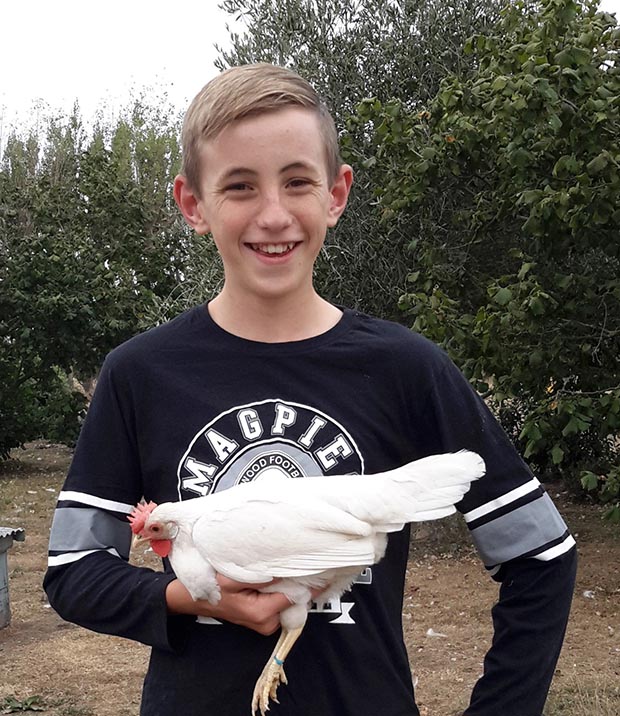 When Rhys Lilley first told his friends he was going to be in a movie, they didn’t believe him.

“Even last year they didn’t really believe me until the movie trailer came out. They think it’s pretty funny now.”

Seeing yourself up on the big screen is a weird experience says Rhys.

“You’re just never thinking that just around the corner, some guy is coming and knocking on the door and wanting to make a movie about you and your chickens.”
Rhys got into poultry aged nine and has concentrated on the Leghorn bantam (pronounced ‘le gorn’).

“They’ve just got their own personalities I guess, and they’re cool to work with. I might have 15 or so.

“(Dad and I), we’re working together to get better birds. The Leghorns, you want a really good square chest, like a brick.”

Rhys has a special gift with animals says his dad Mark.

“When he was about three, he used to go out in the paddock and he had two Light Sussex hens and he would pick them up, one under each arm, and walk around. He’s just got a knack of being able to calm animals down and get them to do what he wants them to do.” 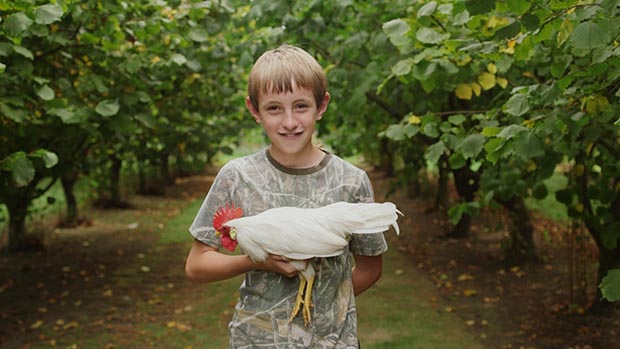 Rhys has grown up a bit since his starring turn in Pecking Order, aged 12.

That helps when it comes time to wash birds in readiness for a show. It isn’t as simple as getting up the day of the show and putting them in the bath.

“The lead-up to (a show) is a bit stressful in terms of fitting in all the times with washing them,” says Rhys. “We’ll wash them a week to five days out. You normally keep them inside, then if they get a wee bit dirty, it’s not a like full hard-out wash, it’s a spot wash.”

That time delay between the wash and the day of the show is crucial as the bird needs to preen their now clean feathers back into the correct position.

“It makes them look fluffy when you blow dry them and then you’ve got to leave that time so the feathers can tighten and settle down in the right places and the bird does that (by preening).”