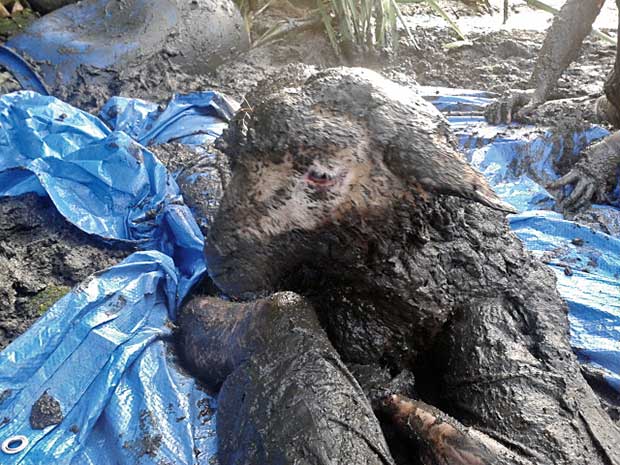 The Mauchline family use teamwork to rescue a sheep in deep muddy trouble.

Amy started running at the letterbox and didn’t stop until she got to the carport.

Mum and the other children followed the excited Amy as she dashed back down the long driveway. Four pet turkeys decided to join the party too.

“How’s that for a chocolate-coated sheep?” Hope grinned. They were standing on the bank of what had been a pond but over the hot dry summer, pond water had evaporated, leaving a muddy mire.

“Take some layers of clothes off Hope,” Mum suggested. “The mud is going to weigh you down.”
“Not until my animal rescue colleague gets here,” she joked.

Her older brother Jonathan soon appeared – he’d had to finish breakfast first – whipped off his jersey, flopped off his jandals and followed Hope down to the edge of the pond. The mud sucked at their legs as they waded unsteadily through the bog to the sheep. It flinched, trying to escape.

“It’s no use,” Hope consoled the sheep, wiping mud away from its muzzle. Jonathan pushed his way behind the sheep, assessing the situation further. “Let’s try and lift it.”

They pulled at the sheep as hard as they could.

“It’s like what King David in the Bible wrote,” said Mum. “I sink in deep mire, where there is no standing,” she quoted.

“He was right,” Hope said emphatically. “There’s definitely no firm ground under here.” She slapped the mud with her hand.

“It would help if we had something to stand on or something that doesn’t suck at your legs so hard you can’t move,” said Jonathan. “Could you guys go and get a plank of wood and a tarpaulin please? Or this sheep ain’t going nowhere.”

“What about that blue plastic barrel you cut in half lengthwise for sliding down the hill on?” offered Mum.
“Yes, that too,” said Jonathan.
“Yell very loudly if anything goes wrong.” She and Rebekah trekked back up the hill to the house.

Hope flicked the mud off her hands and ran her fingers along her now brown legs. “Look, Jono,” she laughed. “I’m a zebra.” Her fingers had left stripes of pale skin.

“You can’t get away from me now,” Jonathan hurled a mud ball at his squealing sister.

“Stop it!” she giggled, wiping the mess off her face, leaving a bigger mark from her filthy fingers.

“We’re coming!” Rebekah’s voice echoed down the slope a few minutes later.
“Could you throw us one of the barrel halves,” called Hope.

Mum threw, but the barrel landed short. Hope stretched towards the barrel, straining against the mud as it clung to her legs.
“Got it!” she declared triumphantly.
“Pass it here, please,” said Jonathan. He sat on the half barrel and returned his attention to the sheep. “We need to lever it up onto my knee,” he decided. He turned to Hope who was on the opposite side of the animal.

“See that half fencepost over there?” Hope nodded. “Can you reach it?”

Leaning over as far as she could, Hope grabbed onto the fence post and pulled. It slowly slid towards her; with another hard yank she had it at her side.

“If you put the tarp under its legs, you could slide it onto the grass,” suggested Mum, handing the tarpaulin to Hope. “Rebekah and Amy, could you go and get some bottles of water so we can wash off the sheep’s face once they’ve got it out?”

“Yes, Mum,” and they trudged back up the hill.

“I shouldn’t have to do fitness for another week,” Rebekah called. “Or another month.”
“You wish!” Mum chuckled.

Hope tugged the tarpaulin, positioning it under the sheep’s forequarters. Jonathan shift the heavy, woolly mass off his knees onto the tarpaulin. The sheep’s wool held the mud like a sponge. He manoeuvred his way in front of the sheep, grabbing its forelegs. With Hope pushing and Jonathan pulling, the sheep was soon on firm ground.

The girls returned with a heavy backpack of water bottles.

Hope was straddling the sheep’s back to prevent it escaping. “Could you throw a bottle here please?”

“For you or the sheep?” laughed Mum. Hope and Jonathan were muddy. It smothered their arms and legs, and was smattered all over their faces and hair.

Once its muzzle was clear of mud, the sheep stood up, teetered and wobbled off into the pasture. The tarp was left to dry off in the sun, and they set off home for a hose down and a hot shower.

“Do you want a hug, Mum?” Jonathan grinned and reached out with his muddy arms.
“No way!” exclaimed Mum, dodging out of the way.

“Can I hose you down when we get home, Hope?” giggled Amy, enjoying the idea of
the opportunity to squirt her big sister.

“Yes, if you really want,” answered Hope. They ambled back, the turkeys trailing behind them, everyone heading home now the fun was over.

Do you have an interesting story, email us at info@lifestylemagazinegroup.co.nz