Where the bison roam: Meet the cuddly-looking beasts of the wild west that live near Taupo They look quite cuddly, and they’re roaming on a farm near Taupo, but farming them isn’t for the fainthearted.

They radiate supreme confidence. A ton of solid muscle standing almost 2m high that can outrun a horse and snap a fencepost just by leaning against it. It sounds daunting, but Dennis ‘Gunar’ Greenland says bison are easier to farm than his Highland cattle or wapiti deer.

The trick is to respect them, or these domesticated bison will remind you that their ancestors once ruled the plains. Unlike cattle or sheep, you never get in behind and herd them. They like to be face-on and see you at all times.

“You pull them,” says Dennis, shaking a bucket filled with a bribe of multi-feed nuts. “As soon as you push them, you run into problems.” 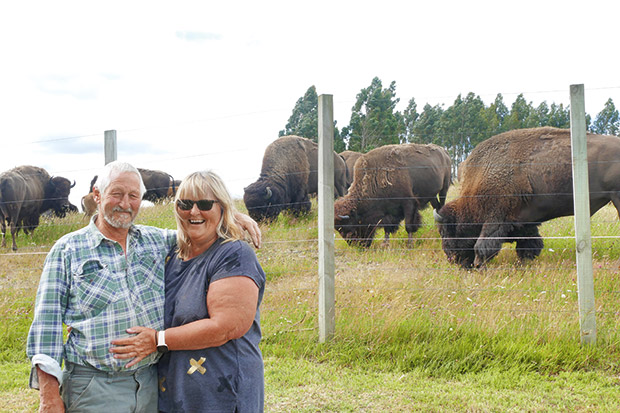 It’s also important to understand their language. The first warning is a shake of their head – ‘back off’. Then they raise their tail – ‘I mean it, get lost or else’. You don’t stick around to find out what comes after that.

Crucially, never get between a cow and her calf as they’re very protective. Dennis says the cows trust him and will wander away and leave him with their young, but he’s very careful not to upset, pat or startle the calves.

“They’ll come running to its defence, quick as that,” he says, snapping his thumb. “And it’s not just the mum, it’s the whole herd to the rescue.” 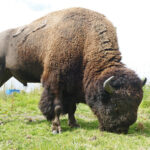 Mature bison bulls get close to 2m high at the shoulder (females reach about 1.6m or so), and can weigh from 400kg, up to almost a tonne for an adult bull. 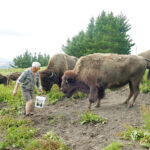 However, they’re also smarter than other stock. Dennis says when his matriarch bison got trapped in a fence, she remained calm and trusted him to take care of it. “She couldn’t do anything to get out, so I had to cut her free. Not many animals will let you do that, and she had her three-day-old calf with her.

“I cut her horns free first, then she could take the weight off her trapped leg. She stood there and ate some pellets while I cut the wire and unwound it. Nothing else would do that.”

Dennis saw his first bison in 1977 at Melbourne Zoo. It was love at first sight. “I saw this magnificent beast and thought, ‘wow, what an animal’, and it stuck in my mind for more than 30 years. I thought, ‘I’ll never have them.'”

A chance scroll through TradeMe one night saw Dennis make the ultimate impulse buy. “We were looking at horses on TradeMe, and there were these bison pictured amongst them in the ad. I bought them! The next week I went and saw the bank to get the money. They weren’t impressed.

Dennis and Shirley now have a herd of 19 animals that ranges over their block, high in the hills between Taupo and Rotorua. The mesh-lined boundary fences are 1.8m high. Bison, despite their enormous weight, can easily hurdle a standard fence. However, if they do, they never go far or leave the herd. It’s quite something, says Shirley, to wake up and find them grazing on the lawn.

Though she doesn’t get too close to them herself, Shirley says they’re amazing animals. “They’re not like normal cows. They’re incredibly agile. The young ones start (playing), and then they’re all in, running and dancing. They’re beautiful, majestic animals.”

WHY YOU CAN’T SHEAR A BISON

A bison’s hide is incredibly tough. There’s a 2cm thick collar around the neck and shoulders, so you can’t get a needle through it to administer injections. Drenches and medications are given orally.

The brown fibre that covers their whole body in winter is so well insulated, snow will sit on their backs all day, unaffected by the underlying body heat. 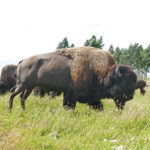 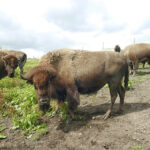 It sheds in ‘tags’ of matted fibre, about 15% of which is a soft durable down that felts easily and is said to be warmer than merino and as soft as cashmere.

In their summer coats, they look oddly out of proportion. The powerful shoulders are still bulky and covered in matted fur, but the body tapers back to smooth, slim hips.

The remaining coarser guard hairs are a hollow fibre with incredible insulation properties. These hairs can absorb over 35% of their dry weight before feeling wet (compared to 7% for synthetic material). These are made into soft socks or warm coats by a few firms in America, but because bison aren’t predisposed to stand still for shearing, and it’s too hard to force them, supply is rather limited.

One of the few other places to have bison is Orana Wildlife Park in Canterbury. They use the wool as sensory enrichment for their meat-eating animals. Exotic species manager Racheal Mason says the lions love rolling in it, chomping it, and tend to get very silly.

HOW TO WORK WITH BISON

Bison are less likely to challenge something they can’t see through, so it’s common to use screens in the yards. Dennis uses a thick material tied to 50mm galvanised pipe walls.

Dennis says they’re very intelligent animals and quick to learn. It has taken time to develop a crush with an overhead walkway. Oddly, his bison don’t seem to mind it, despite their natural predator fear of anything above and behind them. Dennis had to install specialist deer fencing to keep them contained.

But no matter how quiet they are or how comfortable they seem in the yards, you never, ever get into a pen with them.

And while they will come and eat food out of Dennis’ hands, he also doesn’t enter their paddock during the mating season in autumn when the males are particularly aggressive.

Bison have a breeding pattern similar to cows and deer. They breed easily, and calves gestate for an average 283 days (just over nine months), although Dennis says he suspects his cows give birth a couple of weeks earlier. 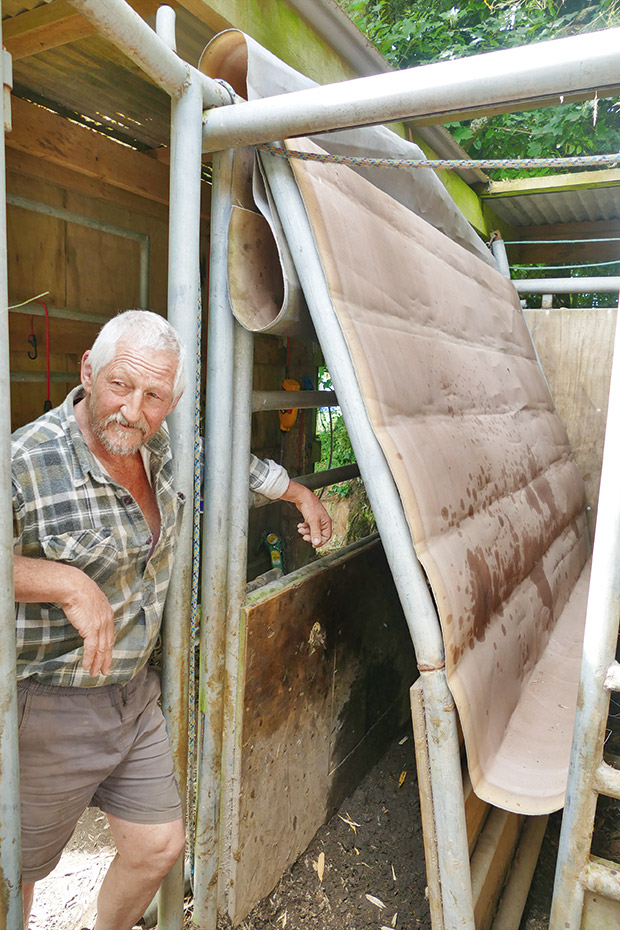 Dennis uses padding in the yards to help keep his bison calm.

Bison mums are protective and generous, sacrificing condition to ensure their calves are well fed. Calf-raising can be so hard, Orana Wildlife Park don’t breed their cows every year and provide supplementary feed during lactation. It’s believed this is due to the bison’s metabolism, which is different from that of cattle.

Because a normal-sized paddock is a fairly confined space, bison are also more prone to parasites. This is monitored and controlled with facial egg count (FEC) tests every three months, and stock are treated with drench as needed.

Orana Wildlife Park alternates the grazing of their small bison herd with their zebra as the worms that affect bovines (cows, bison) don’t transfer to equines (zebras, horses) or ovines (sheep). Sheep can carry malignant catarrhal fever (MCF) which, although rare in NZ, is fatal to bison and caused the death of a bull at Orana Wildlife Park several years ago. Otherwise, bison are extremely tough and hardy animals that breed easily and are easy to farm, if – as Dennis will remind you – you treat them with respect.

WHY DO THE BISON ROAM HERE?

Bison were originally sent to New Zealand zoos as part of a conservation strategy almost 100 years ago. It’s estimated that 30-60 million once roamed the North American Great Plains, but by 1884 only 325 remained in the wild.

The US and Canada established reserves, and the Canadian National Park Board sent beasts to countries where it was thought they would thrive. Two cows and a bull were loaded on a boat in Vancouver destined for NZ, the first bison to cross the equator. All three were wild, and the bull was particularly fierce. 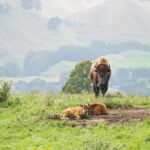 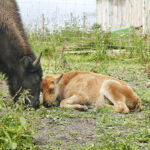 Four days after leaving port, he lay down and died. A calf born during the journey also died. The surviving cows were alone at Auckland Zoo until 1929 when two replacement bulls arrived. The first calf was born in November 1930.

Today, there are small herds of bison at Orana Wildlife Park and Hamilton Zoo and an estimated 100 or so in private ownership. In the US, they now number over 500,000. There’s even more ‘beefalo’, a bison-cattle-cross bred commercially for meat.

“Oh, give me a home where the buffalo roam,” is the opening line of the classic US western folksong, Home, home on the range. But buffalo have never roamed the US.

Historians believe that early European explorers are to blame for confusing bison with buffalo. It could also have been a play on the French word boeuf (beef), or because bison hides resembled the buff coats worn by the military during the 1700s. 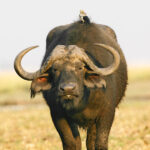 Actual buffalo look quite different to bison. Two of the most common are African or Cape buffalo (above) and water buffalo (next photo). Cape buffalo reach a similar size to bison but are a very different shape with no hump or thick coat. Water buffalo are about half the size. 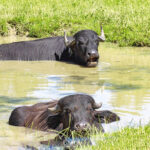 But the animals called ‘American buffalo’ by people in the US are bison (Bison bison), native to North America and parts of Europe. The most common buffalo are water buffalo from Asia (Bubalus bubalis) and African or Cape buffalo (Syncerus caffer).

Bison have large humps on their shoulders, big beards, and thick woolly coats. Buffalo have large horns resembling a handlebar moustache or big crescents and a sparser covering of hair.

Avonstour Island Heritage Farm: The weird, wonderful and rare breeds on this 16ha farm near Stratford