Liz Tregidga (centre) with her parents, Phil and Jenny.

A family vegetable business on a South Auckland block has created an award-winning way of selling their produce.

The local farmers’ market saved the Tregidga family business back in the mid-2000s. Today, Clevedon Herbs & Produce is thriving under sisters Liz and Amy Tregidga (pronounced Treh-gidge-ah), and they’ve greened up the herb and vegetable-growing operation, half an hour’s drive south-east of Auckland.

But 15 years ago, their 25-year relationship supplying supermarkets came to an end. Things seemed grim for Amy and Liz’s parents, who started the business back in 1980. It was selling direct to customers through farmers’ markets that turned things around. 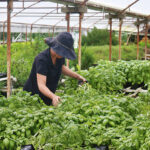 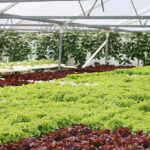 The Tregidga family were the first to grow fancy red lettuce in the 1980s, and were paid per leaf by a top Auckland hotel. 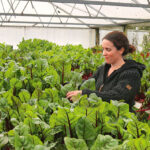 “Helen Dorresteyn (who owns Clevedon Buffalo Company) started the Clevedon Farmers’ Market just as the banks were telling our parents they needed to sell up,” says Amy.

“On their first day at the market, (my parents) had some lettuces and seedlings and decided if they were going to have to stand there for four hours, they needed to grow more. That’s what we still do now.”

Next was the Howick Farmers’ Market, run by the woman Liz calls their “lifeline”, Jenny Foster. They quickly gained a large, loyal following. “The support from the community there has been incredible,” says Liz. “Some hardcore customers show up even during a cyclone!”

Today, Liz oversees growing, Amy does the marketing, and parents Phil and Jenny work with them. Until the first Covid-19 lockdown, they were getting up at 4.30am every weekend to prepare for the local farmers’ markets. But with their new online veggie box business, there’s no need for all those early starts. Crops are chilled, boxed, and delivered directly to a customer’s front door, arriving 24-48 hours after harvesting. 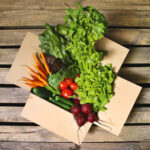 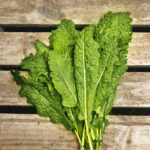 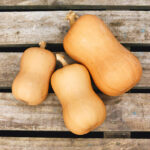 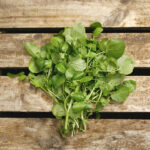 That’s three to four days faster than large scale suppliers, and it shows. Opening a Clevedon Herbs & Produce box feels like you’ve walked outside and picked the crops yourself, said the judges of the 2020 Outstanding NZ Food Producer Awards.

They presented the Tregidgas with a special award for ingenuity for their summer vegetable box. “The basil took us to Italy. Fantastic presentation, herbs on their own roots, carrots and beetroot with leaves still attached showing absolute freshness.”

The family gets a lot of feedback from happy customers too. “We get people saying how grateful they are for the fresh veggies,” says Liz. “They open up the box, and they love seeing all the colours and the smells. A lot of people say it’s like Christmas. It’s all very positive.” 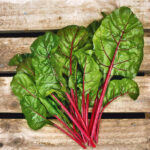 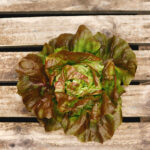 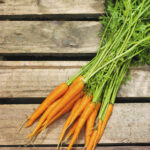 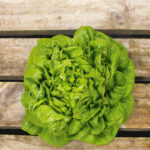 When they put together a box, Liz says they aim to include as wide a variety of vegetables as possible. “I wouldn’t want to eat leafy greens all the time, so we have a few root crops. All the essentials like broccoli, carrots, and at the moment we’ve got butternut.

In winter, we grow more rocket and watercress, things with a bit more flavour as people get a bit bored after a lot of silverbeet and kale. We get a few herbs in there, so when people open the box, they get this nice burst of smell from the basils in summer or the parsley.”

Broccoli is their number one seller. “It’s very sweet and tasty,” says Liz. The rest of the top five (depending on the season) are lettuce, tomatoes, baby spinach, and carrots. Then there’s the little box of special you’ll find tucked inside. 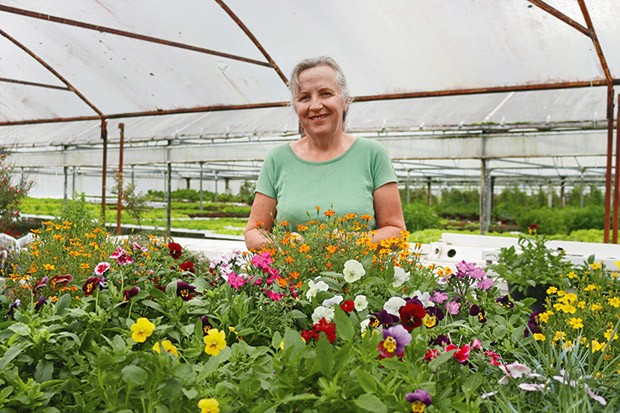 “The edible flowers are all picked by my mum,” says Liz. “Every petal is plucked by hand, but it’s the best job on the property because you’re amongst the flowers.

It’s fiddly, but very rewarding. People love that little added touch that you wouldn’t get from a supermarket. It’s a bit more personal, it shows a bit more love.”

The Tregidga family have always been growers ahead of their time. Phil’s dad was one of the first to grow greenhouse tomatoes in NZ; Phil and his brothers pioneered the country’s first hydroponic systems in the 1970s.

In the early 1980s, Phil and Jenny bought their block on the outskirts of Auckland. Phil built everything, from the plastic gullies where the plants grow to the plastic houses still used by the business today. 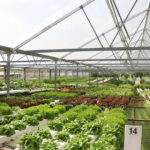 Hydroponic plants grow in nutrient-rich oxygenated water, which is fed to the root system. Rather than soil, the Tregidgas use seed-raising mix. 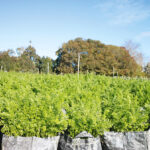 Carrots are grown in large planter bags outside. 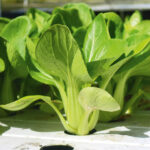 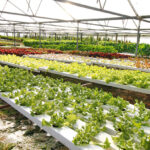 The entire working area covers about half of their 4ha (10 acre) block. “Dad built it from scratch and learned as he went along,” says Liz. “He’s got that Kiwi ingenuity happening.”

While most growers endure back-breaking work, there’s almost no need to bend over here. The hydroponic drains sit at bench height, and weeding is minimal. Crops such as carrots and beetroot are grown in large, reusable planter bags that sit on the ground outside. They use organically certified sprays to prevent pests and diseases.

Hydroponics is all about water recycling and getting the nutrients into the plant for more fruit and higher yield, says Liz. “Hydroponic lettuce uses 80% less water than conventionally-grown lettuce, and the water is recirculated, so it doesn’t get lost into the ground.” 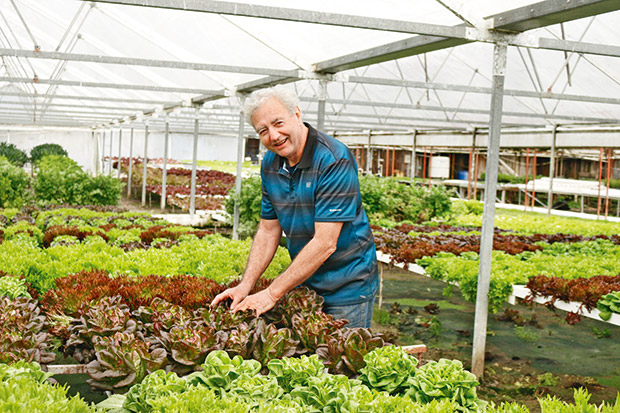 Phil Tregidga’s family is well known in the growing industry in NZ. His grandad was one of the first to grow tomatoes in a hothouse, and he and his brothers pioneered hydroponics.

She’s been helping her parents since she was seven years old. However, it was only in 2011 – after travelling around the world – that she started working on the farm full-time. She had lots of ideas. “They were doing a couple of farmers’ markets. Then I came in and tripled everything.” That meant growing crops they’d never tried before.

More stories you might like:
How to profit from specialty timber (from two foresters who've done it)

“Because we grow hydroponically, there was definitely a lot of trial and error to find out what would work. Like, we find rocket just goes to flower – I think that’s probably rocket being rocket, it’s pretty hard to grow. Fennel gets stuck in the (drain) gullies, so that’s a bit tricky.”

For the first five years, Liz spent a lot of time writing down everything she did in diaries. “Like I’d write, ‘next year, in March, seed more beetroot for winter’. The following year, I’d look back and think ‘right, I need more beetroot now’, whereas before I’d been doing it in April or May and it was too late. Liz says customers love seeing all the colours and smells. “A lot of people say it’s like Christmas.”

The bounty of crops under Liz’s regime highlighted a big problem for the business. Their team could produce high-quality, nutritious produce and turn up at all the markets, but if it was raining, customers wouldn’t come out to buy them.

“I thought ‘oh my gosh, I’ve got to find another way’ – our income would be cut in half on those weekends.” That’s when she thought of selling veggie boxes, thinking it’s better to work smarter, not harder. “The family thought I was a bit crazy, but they let me do my thing.” 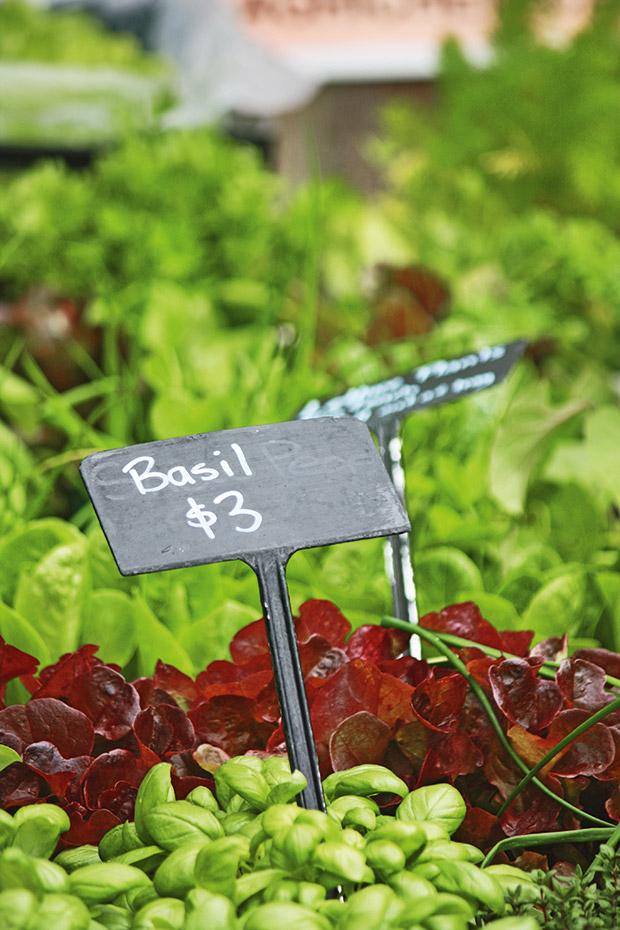 During summer, the family grow large amounts of basil, one of their top five crops.

The family used to have to attend five weekly markets around Auckland, stumbling out of bed at 4.30am. When we first spoke to them in March, pre-lockdown, they were selling 60-70 boxes a week.

They were aiming to get to 100 and had cut back to just two markets. But when the country went into Level 4 lockdown, everyone wanted a box.

“It was madness,” says Amy. “We opened up the website (shop) on April 1 and received 250 orders for veggie boxes in two hours and had to close it again. It was awesome, but very overwhelming.”

The same thing has happened every week since. The team has been working long hours – all contained within their bubble – to get all the work done. 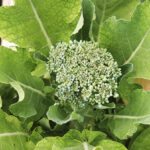 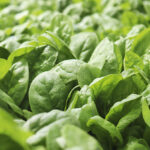 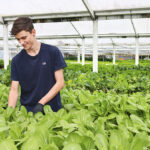 Normally, customers can choose a selection of fresh, seasonal salad greens, herbs, edible flowers, and a range of other vegetables, or opt for a mixed seasonal box. The massive demand since the virus hit NZ means they’ve only had the time and stock to do mixed boxes.

Liz is called the boss by everyone, parents included, but she says the business is a team effort. Her dad does the growing, maintains the hydroponic system, and handles the sprays and fertiliser. Her mum is ‘the backbone’, working on the farm, looking after staff, and offering moral support. Sister Amy created their first website and handles all their marketing and customer communications.

Liz took over running the farm aged 25 and says it took her about six months to find it was her passion. “I just love that we’re growing all these vegetables, then going to the market and selling them directly to customers and seeing how grateful they are. If (the company) was still selling to supermarkets, I wouldn’t be doing this. Amy Tregidga helping out with the microgreens. She works in marketing, created the family’s first company website, and handles customer inquiries.

“Growers have a hard life, and it’s so amazing getting feedback from customers. It’s very much appreciated.” It’s also a lot of hard work. Before the lockdown, Liz was working seven days a week, but taking Monday mornings off to learn how to surf.

“I work a lot. I work too much. I needed to break away and do something for me, so I’ve been going up to Mangawai every Monday. I leave at 6am, have my surf lesson – it’s a ladies class, we have a good laugh, and I’m standing now. Then when I get home, I’m on the computer from 3pm until 10pm, getting our orders ready so we can do the harvest the next morning.”

She’s given up the surfing for now but says she’s feeling positive. “There’s a saying, no-one gets into horticulture to make money. It’s a lifestyle. It’s hard work, and a lot of people don’t like hard work. But you’re not sitting in an office. You’re working with plants, and you’re creating food for people. It’s my passion.” A LITTLE BOX OF LOVE

Edible flowers add bright, cheerful colour to a dish, but several also make a big contribution to the flavour.

– nasturtium flowers (and leaves): strong, peppery.
– marigolds, calendulas: citrusy, adds a fruity flavour to a salad.
– carnations: a deeply sweet smell and taste.
– violas: not much flavour but definitely nice to look at, says Liz.

When you’re a grower, you end up munching on veggies as you work. That’s how Liz gets most of her 5+ a day.

“I love our carrots; I always snack on them. The sugar snap peas are right outside my house and I love going out and eating them fresh, they’re really sweet. And the broccolini, you can even eat them raw. They’re so good.”