Many would-be growers can’t afford their own land, but on this block, a little common sense creates business opportunities.

When a group of hippie dreamers bought a small block of land in 1975, they didn’t know it would inspire a chain of organic food stores. Common Property is now home to a co-operative of small-scale, independent, organic growers who supply fresh vegetables, berries, and fruit to the six Commonsense food stores in Wellington and Auckland.

Husband and wife, Jim Kebbell and Marion Wood were two of those hippies. “People called us weekend hippies,” says Marion. “But our idea, somewhat romantic, was to grow vegetables as a way to connect young and marginalised people with the land.”

They now own the farm outright and created the first Commonsense store to sell its produce. Today, their business stocks thousands of organic, environmentally friendly, sustainable food and product lines.

It was Marion’s mother, Frances, who persuaded them to go organic, inspired by Rachel Carson’s renowned environmental book, Silent Spring (1962). Jim, a fifth-generation farmer, didn’t like the idea until he learned about the adverse effects of pesticides, herbicides, and other chemicals on soil health and crops. 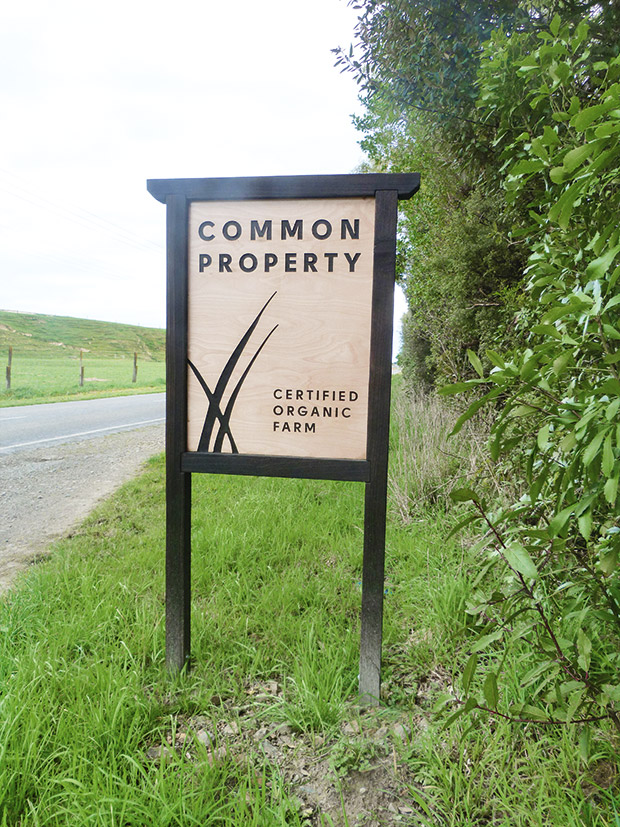 Within a few years, Common Property was transformed into a commercial organic enterprise. “We committed to organics and learnt plenty along the way,” says Jim.

There was no official organic certification programme in NZ in the early 1980s, so the couple helped to found BioGro. It’s now NZ’s largest, best-known organic certifier, and their farm was one of the first to gain accreditation. Marion is a BioGro director, and Jim is a life member.

Crowds of well-informed visitors to the farm during a recent open day are more knowledgeable than she is, says Marion. “It shows organic food is not just a craze. Young ones want to know where their food is coming from, what’s in it, and the story behind it.” Open days provide an opportunity for customers to learn about the company’s ethical principles, environmental sustainability – “you look after the soil, you get healthy soil,” says Marion – seasonal eating, and what’s growing on the farm.

“When we first started the shop, I think the main reason people came to us for organic food was for health reasons,” Jim told Radio NZ in a 2008 interview. “But that’s never been my reason. We came to it much more from an economic and social-economic point of view; small farms were going; farming was going into the hands of multinationals and that’s bad for food production.” Alan and Gill Browne have leased 2ha of Common Property since 2008. Before that, Alan worked for a wholesale ornamental plant and shrub nursery.

“But I wanted to do something for myself,” says Alan. ” At the nursery, I was a chemical applicator, and I wanted to get away from the chemical aspect.

“We get aphids and caterpillars, and we use biological controls (an organic product called DiPel), and that’s it.” 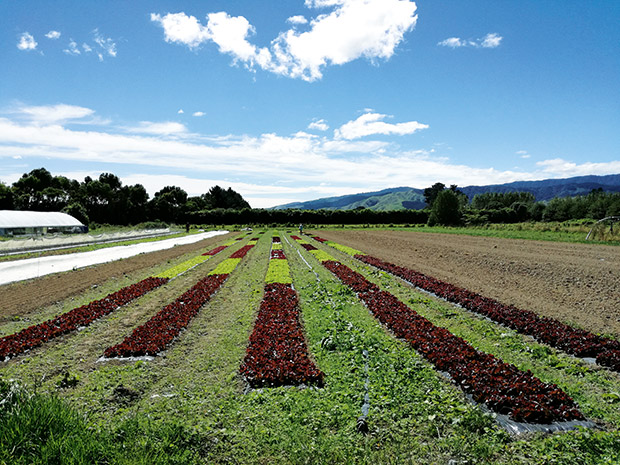 He and Gill sell their freshly-picked salad mixes and vegetables to Commonsense, and cafés and restaurants in the Wellington and Manawatu regions.

Their crops include an assortment of mizuna, kale, rocket, cress, tat-soi, mustard, parsley, fennel, cucumber, courgette, scallopini, capsicum, chillies and basil. The weather is the biggest issue – “It controls what you do, and when you do it,” says Alan – and the clay soil. 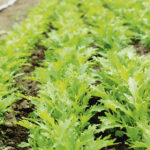 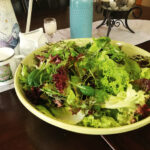 They source organic seeds from South Pacific Seeds and Kings. The lettuce seeds are pilled in a clay coating which gives them a 99 percent germination rate.

That kind of efficiency is important in what is a labour-intensive business. Alan works full-time, his sister-in-law Wendy is almost full-time, and daughter Carly helps out on harvest and planting days.

Every week, they sow 1800 lettuce seeds in trays, plough a new growing bed, and plant out 1800 lettuce seedlings. Plants are fed organic seaweed, blood and bone, and fish fertiliser. They’re grown under a compostable mulch film to keep weeds down and the soil warm. 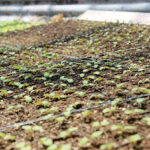 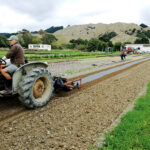 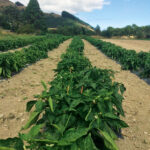 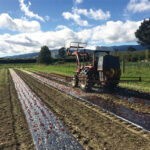 Frost cloth is used through the winter months for weather protection, but it’s also useful in summer, minimising damage from insects, keeping plants clean, and pests out.

“After the weather, our biggest problem is pests. Rabbits can do damage but they’re not that bad. The pukeko are worse, and we can’t do anything because they’re native birds, so we just cover everything.”

Crops are hand-picked three times a week, graded, washed, and packed. “It’s challenging,” says Alan. “It’s hard work for the money you get, but it’s a way of life I love: I don’t have to travel (to work), I’ve got vegetables on tap, there’s a lot of pluses.” Mayatiita Southerwood is an accidental microgreens grower. He first read about the magic of newly germinated wheatgrass in a book more than 20 years ago and started growing it around his house for its purported good energy.

“Then a friend asked me, ‘can you grow it for our juice bar?’ and so next minute, I’ve got a wheatgrass business.”

That led him to try growing other greens in the same way, which he called living salads. “I gave them to a chef mate of mine, and he said, ‘these are microgreens’. Suddenly I had a microgreens business.” 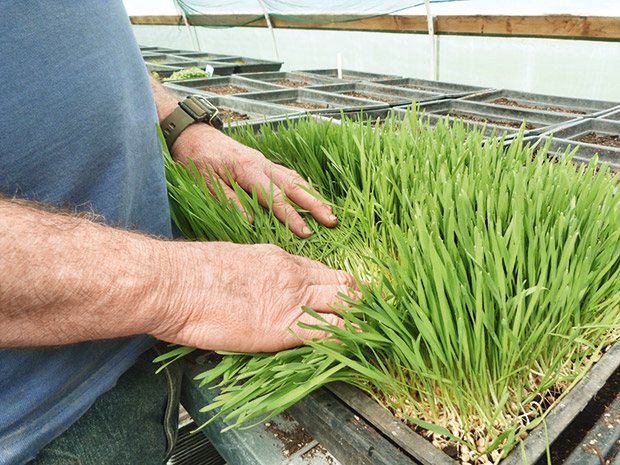 He recommends putting microgreens on top of food, uncooked. “Sprinkle a small handful on soups, stews, pizza, salads, and rolls. They taste good.

“My favourites? The broccoli greens are really yummy, mizuna, bok choy – they look good, and I just like that young energy of germinating plants.” That energy was the inspiration for the business name, Prana Greens.

“Prana means vital energy, vitality, and I’m all about the vitality of food. When a seed germinates, all these compounds and different things go berserk as it turns from a seed into a plant, and that’s what gets me going.”

The greenhouse environment is kept all-natural. There are no lights or heating, which means Mayatiita’s harvests follow the seasons.

“In summer, I grow basil, amaranth and shiso. In winter, it’s too cold so I don’t, but everything else grows all year round – it just takes longer, from four days (longer) to 18 days.” That means in the middle of summer, the greenhouse can be three-quarters empty as crops go in and out quickly. In winter, it’s full to the brim as he waits for everything to reach harvesting size.

It works out well when it comes to his daily workflow. “In summer, it’s pretty hot in the greenhouse so I try to get out by 11am, and I don’t go back until 2-3pm. But at midday in the middle of winter, it’s just beautiful.”

Working on Common Property also means he gets the company of other like-minded growers. “I call myself a grower, not a businessman, that whole business side is my weakness,” he says. “It’s good to be amongst people, and I’ve found people here are very open and sharing, not competitive – it’s more collaborative.” 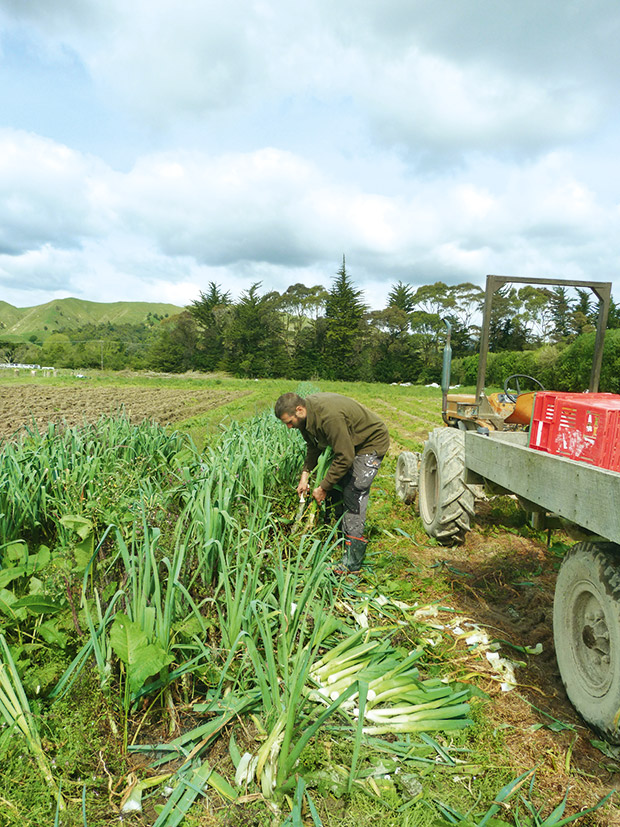 Like the other growers, he uses Bacillus thuringiensis (Bt), a form of naturally occurring, soil-borne bacteria for natural insect control.

Common Property Farm also has a berry expert, Peter Robson, growing magnificent fruit almost all year round. Reuben Nicholas spent two years working with Sean, but now runs his own business growing aubergines in a tunnel house, and corn in the front field.

“Aubergines are a susceptible crop, and non-organic crops are usually heavily sprayed with chemicals,” says Reuben. “Growing them organically is hard, but it’s worth it.”