A batch of mud-brick batter


Mud, muck and madness … the family ditch the churn of house building and find peace (and perspective) on an unpeopled Pacific beach.
Issue #67 May/June

If the journey of marriage could be likened to a road, it was fair to say James and I had hit a steep and gravelly uphill section. Smiles had given way to snarls and we seemed incapable of exchanging more than a dozen words before degenerating into waspish exasperation at one another’s obtuse inability to conform to the other’s expectations. Mud bricks can do that to a relationship.

For months, it seemed, our life had been conducted to the rumbling sound track of the concrete mixer churning out mud-brick batter. The house-site was a construction zone all over again – dominated by a mountain of thick yellow clay and a sizable dune of coarse-grain sand trucked in and awaiting transformation into bricks. Drums of soaked newspaper pulp, a sieving station, recycled doors in various states of renovation and stacks of timber for lintels and door bucks added to the obstacle course surrounding us. 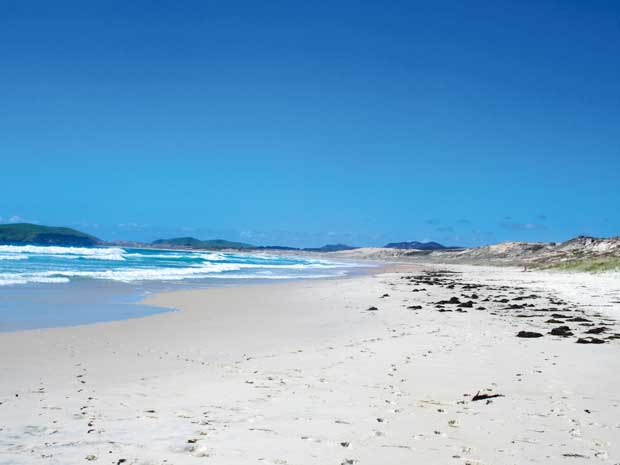 Every morning, the kids woke to the rattling sound of James sifting clay through a converted mattress base. The concrete mixer clunking into action was the signal for our WWOOFer to emerge from his bed. Over very strong coffee, the usually cheerful young man grew increasingly sullen as he contemplated his daily job of wheelbarrowing mud-brick mixture across to the new room for packing into the in-situ brick moulds.
“Wood is better. Faster,” he told us. James, taking a moment’s break from the shovel, nodded glum agreement. “There’s mud-brick making, and then there’s the rest of life,” he declared as we surveyed a new brick layer drying. “Everything else is easy compared to this.”
There was no escaping the mud-brick madness. Lumps of the stuff lay wherever we looked. No matter how often I swept and wiped, indoors stayed grimy as Vita and Zen traipsed in from building-site games caked in clay and grit. The children seemed to secrete sand from their very pores, transforming our beds into sand pits in which we tossed about, exfoliating irritably on abrasive sheets. The walls of our future kitchen/lounge were rising, but tempers were too. 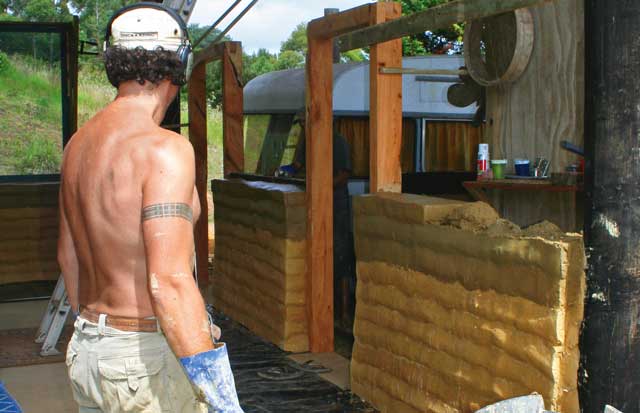 “What do you mean, I have to slow down?” James had become an automaton lacking an off switch.
The holiday we prescribed ourselves was to an unpeopled beach where we camped among pines on the edge of the Pacific and remembered to breathe deeply again. With no building site demanding attention, time expanded and slowed, tricking us so that we were astonished to find we’d already eaten lunch by 10.30am one day. Instead of our forested skyline, we contemplated an empty horizon, towards which our tightly wound minds began to unfurl. The thundering roar of the sea, all white foam and surging currents, added exhilaration as we turned playful in the surf; and while our beds remained as gritty as ever, at least it was beach sand and not building sand the kids were transporting.
As we dawdled through days, we relaxed. Novels were opened. We went fishing and took long walks, hunting for treasure. And somewhere, in among the booty washed up from the ocean – the flotsam and jetsam, the probable dinosaur bones, the shells and seaweed – we picked up the most valuable treasure of all; a spark of enthusiasm flickering once more for our project.
Away from home, we began to feel love return for the place. Perspective reappeared. Like twisting a kaleidoscope lens, the drudgery of building with mud bricks was replaced by flashes of creative excitement as we recalled our vision of making a beautiful space.

Fresh ideas began to flow. Better yet, conversation and affection did too. The pile of yellow clay was waiting when we returned from the coast, but it no longer seemed so mountainous. We’d scaled the steep hill in our marriage too, and the view from the top suggested gently undulating, paved roads ahead.