In Jim Kayes’ blog this week – he’s not surprised by the ingenuity of an injured daughter.

It certainly wasn’t the start we had in mind to a rare, lazy Sunday morning together as a family. The first rashers of bacon were starting to sizzle in the pan when the youngest came rushing inside from the deck, swinging the door closed behind her.
“Dad,” she said calmly a few seconds later, “I think I’ve hurt my foot.”
She had. The door had closed too quickly, whacking into her leg, the sharp, steel corner slicing her Achilles’ tendon open.
It meant a trip to Auckland’s Starship Hospital for children (our first as parents), two nights sleeping on the floor by her bed and a rapid realisation that while her injury was significant to us, there are many children in a much worse state. And most are remarkably stoic. 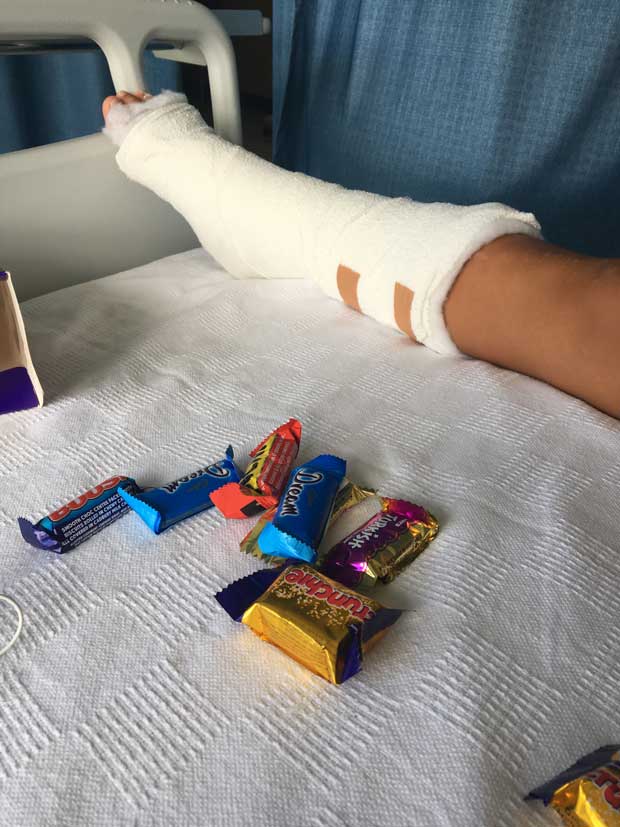 Our girl was a picture of positivity, bantering with the doctors before she went into surgery about the height restrictions on her cast and declaring, not long after the tendon was sewn up, that the surgeon’s predictions were all wrong. She’d be back faster than the doc reckoned.
But the reality for this active 11-year-old is slowly setting in. Surf nationals – gone. Weetbix Tryathlon – transferred to her big sister. Netball trials – no way. School camp – maybe. Yet our girl remains upbeat in the way kids are though, at times, it’s obvious she’s covering her disappointment that such a stupid accident is having such a massive impact on her life.
I could’ve told her all about that. She is, quite clearly, a chip off the block as I’m the master at dumb accidents. A broken leg aged four when I dived over another child for a balloon at a birthday party, and landed on a solid wooden coffee table, was a sign of things to come. I split my head open more times than Mum wanted to count, walked through the glass ranch slider and once – now this took some beating in the freak accident department – sliced the tip off my finger catching a diving mask that had been tossed to me.
So it’s actually quite surprising we haven’t been to Starship before. Not that I’m keen to go back. The staff are amazing, and we were dealt with efficiently and caringly, but no one wants to spend time in hospitals.
For the youngest, surgery meant a long time between food with a 23 hour nil-by-mouth wait for her operation.
She made up for lost time, however, a fact she remarked upon to one of the nurses when she asked post-surgery if everything was ok.
“I’ve got everything a kid in hospital needs right in front of me, thank you,” she said with a smile. “Sprite, jelly babies, chocolate and grapes.”
She then shared most of her bounty with the other girl in her room.
Now home, my job is akin to reining in six wild, bucking broncos. She might be on crutches with her foot encased in plaster, but that isn’t slowing her down.
I had to take her to surf club training the other night, ostensibly so she could catch up with her mates, but in fact, I think it was part of the grieving process for a summer that’s over too soon. And there was an earlier-than-scheduled return to school so she could see one of her friends on their birthday. It was pouring with rain, but calls for care in the wet were waved off.
It’s encouraging to see her resilience even if some of it is bravado, but there have been mishaps. Determined to get herself inside when we came home from the hospital she misjudged a step and skinned her knee.
Then there was the bump I heard as she came downstairs from her bedroom (she’s adamant she can get up and down without help).
“Dad,” she called out, “please tell me you didn’t just hear me fall onto my bum.” I hadn’t, but I knew now. 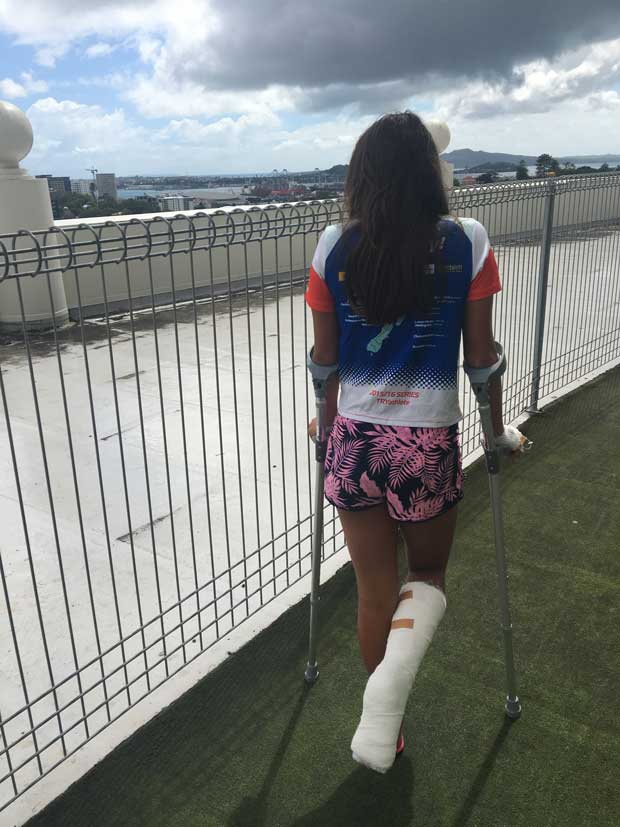 Again, I have only myself to blame. I wrecked my knee playing rugby in London many years ago and quickly grew frustrated with the sedentary life of being unable to walk. One night my wife returned from work to find me gone. I returned a bit later all sweaty and had to confess I’d gone for a “crutches run” around the nearby Regent’s Park. She was less than impressed.
So I had to just chuckle the other day when our injured young thing crutched herself into our bedroom, looked at the bed and stated – “that’s just perfect”.
“What is?” I asked.
“Your bed,” she said. “I need a soft landing so I can practice forward rolls off these crutches.”
It’s going to be a long six weeks.