A pampered plane lets its devoted humans share its fancy hangar on a high-country station in mid-Canterbury.

Few planes get to sleep under the same roof as their humans. But then, few planes have such filial heart in their flight-log history. The aircraft in question? A beloved Cessna 185 that boomeranged back into family hands after a 37-year absence. The aircraft’s roomies are Craig and Yolande Thompson. All share sleeping quarters in a barn at the couple’s 3700-hectare angus beef farm at Glenburn Station in the Lees Valley, inland from Oxford, mid-Canterbury.

Understanding why this aircraft is the cosseted star inhabitant of this hangar-home hybrid requires a short detour. Craig’s late father Lyndon used to have a Tiger Moth, but he thought he’d better sell it when he married. “Nanna wouldn’t let Mum go up in it because it didn’t have a roof, and he’d fly it upside-down over the house,” says Craig. 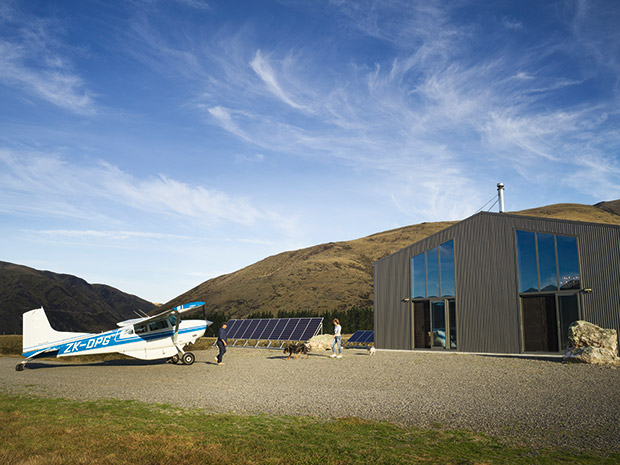 Before Lyndon could look for a Nanna-approved aircraft, his boss Bill Walker intervened and saved him the financial outlay by purchasing an old Cessna 180 and, later, a brand-new Cessna 185. Lyndon was the manager of Hazeldale, a high-country beef and sheep farm near Clinton in South Otago and had sole command of the Cessna for work and recreational use. He adored DPG (the plane’s registration and nickname).

When Lyndon moved the family to Tīmaru in 1978, Bill sold the plane. “I’ll never forget the sad look on Dad’s face,” says Craig.

Lyndon died in 2003. “When he passed away, something urged me to get going and learn how to fly.” Just as well, too, for a decade later, Craig stumbled upon his dad’s former Cessna and told the plane’s new owner of its sentimental heft. In 2016, the owner eventually sold it to him. “The first time I sat in the pilot seat, I could see my father sitting there. It was 37 years since he’d flown it. I think Dad was with me when I picked up the plane. He would’ve approved of me taking it back. 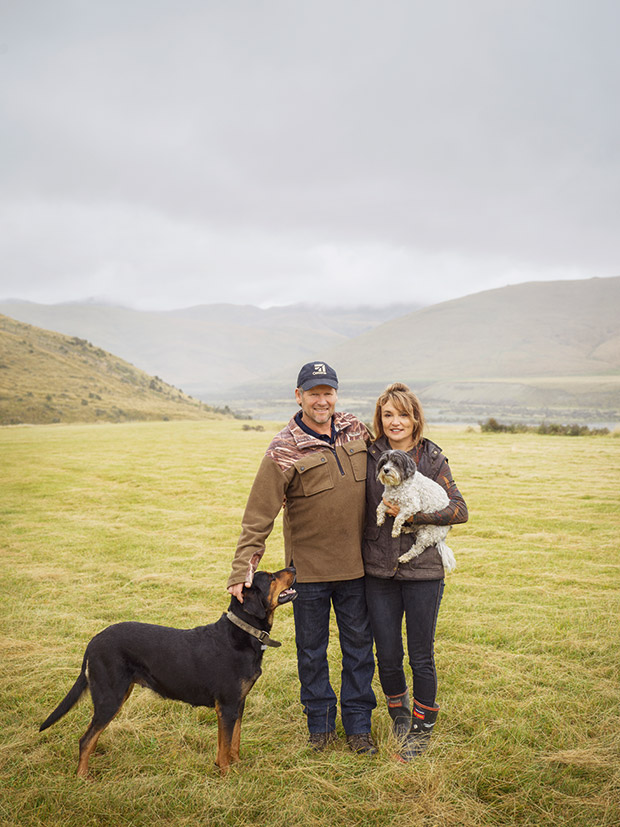 “He used to fly us up to Ōamaru in it to see the grandparents, so it was almost like an old family car.”

Wanting to surprise his mum Lynn with this coup, Craig arranged for her to be on the deck of their Tīmaru home having a cuppa with Yolande and the rest of the family when he casually flew overhead. “I don’t know how Mum managed to see the DPG rego, but she did. When I returned to land, she had a tear in her eye, so I took her for a flight to dry it up. We then got her to cut the ribbon on the door of our hangar to welcome DPG home, and there was champagne all round.”

When Craig and Yolande purchased Glenburn Station the following year, the Cessna was the perfect 50-minute means of transport between their Tīmaru home and the new farm (by car, it’s a punishingly twisty three-and-a-half-hour trip through the Ashley Gorge). The walls of the home display treasures from Yolande’s travels (such as the hand-painted masks she found in Indonesia) as well as Craig’s hunting trophies. “One of the big attractions of high-country life was the chance to do some hunting. It’s isolated here, and there are loads of deer and wild pigs in the native beech forest on our property,” he says.

Wanting to surprise his mum Lynn with this coup, Craig arranged for her to be on the deck of their Tīmaru home having a cuppa with Yolande and the rest of the family when he casually flew overhead. “I don’t know how Mum managed to see the DPG rego, but she did. When I returned to land, she had a tear in her eye, so I took her for a flight to dry it up. We then got her to cut the ribbon on the door of our hangar to welcome DPG home, and there was champagne all round.” 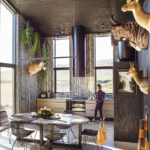 Yolande wanted to create a cosy but not too den-like interior. “We’ve used lots of glass, but the dark décor helps reduce the sun’s glare. Black ceilings look amazing, but you need a bit of height to pull them off. I made upside-down planters with artificial plants to frame Craig’s prized gemsbok head. It’s too hot up there for real plants to survive.” 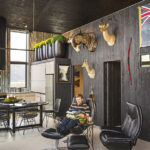 Craig in his favourite chair (“It’s a rare occasion to see him relaxing inside in the daylight,” says Yolande) 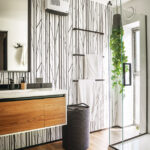 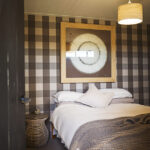 The Cessna’s welfare was uppermost in Craig’s mind: “With an aircraft in that environment, you really must have a shed. I figured we needed a hangar with a wee workshop where I could fix things and have somewhere to stay. So, we made a longer hangar and put partitions in it.” Canny, that. Sleeping in a sturdy hangar with steel truss support makes good home sense in an environment bullied by the wind like the Lees Valley.

And when it comes to Herculean structures, Craig knows his onions: he runs Thompson Construction & Engineering in Tīmaru with his brother. This made for excellent preferential treatment: the hangar parts were promptly trucked in from the family factory, and the entire 364-square-metre build took just three months. The mezzanine floor overlooks the living area below and makes perfect sleeping quarters for visiting daughters or musterers. “The apex of the hangar is six metres high, but the sound doesn’t ricochet — there’s no echo,” says Yolande. “The walls and ceiling are made from XLam (a laminated timber product mainly used in commercial buildings), so they’re really solid, and the whole house has been heavily insulated.”

The décor was also a family affair. Yolande is an interior designer (at Thompson Interiors), so she got to work turning a third of the hangar into living quarters with room enough to host Craig’s three adult daughters (Samantha, Maggie and Lizzie) as well as the occasional mustering gang.

“I knew Craig would be spending more time up there than me, so I was mindful about designing things that were practical but still quite styley,” says Yolande. “He’s a keen hunter and has lots of trophy heads, so it made sense to go for a lodge feel. But, being a designer, I wanted it to look a bit more eclectic. The dark décor gives it a dramatic and cosy feel. It’s not too precious, but it’s still stylish.” Keeping the human end of the hangar warm was vital. “If you get a big snow or frost, you can easily get to minus-10 degrees up there,” says Craig. The 400mm pink batts (about three times chunkier than typical residential insulation) and a powerful 22-kilowatt log burner keep things toasty. The hangar is 100 per cent off-grid, so electricity is generated from 20 ground-mounted solar panels and stored in 24 gel batteries.

“I didn’t want to put power poles in and spoil that high-country mountain view, so off-grid was the only option.” Water is collected from the roof and runs through a UV filter for purification. Greywater is managed by a 200-metre drip-field system adjacent to the dwelling.

Craig spends the first half of his week working at the family construction company in Tīmaru and the other half at Glenburn. “I always wanted to have a wee go at farming. Living on that high-country station near Clinton was a big adventure for me as a kid. I helped Dad with a bit of the mustering (though I probably got in the way more than anything).” 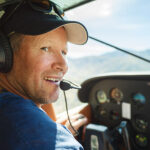 Craig in his happy place — in the same Cessna seat his father once occupied. 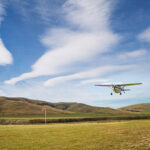 “They don’t make the Cessna taildraggers anymore. They’re good for rougher airstrips but a lot harder to operate. It keeps you pretty honest — you really have to concentrate.” 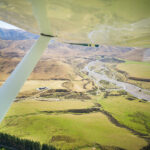 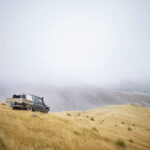 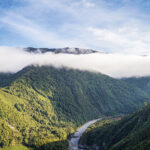 More stories you might like:
1962 Porsche 356B Karmann Notchback Coupé is a smooth ride on New Zealand's country roads

Glenburn’s 500 angus cows don’t mind Craig’s to-ing and fro-ing. “They’re hill cows, so they’re pretty low maintenance. One of the neighbours keeps an eye on the cattle when I’m not there.” The only other resident creatures are the bees that inhabit 1000 or so hives on the property and produce 18 tonnes of top-grade mānuka honey each year. With a beekeeper taking care of the hives and processing the honey, Craig and Yolande need only encourage the mānuka plants to run rampant across their land.

They also have 1300 hectares of native beech forest, which Craig likes to disappear into for some hunting.

Glenburn is his exhale: “When you wake up on the farm, there’s no noise. You might hear the odd canada goose fly past, but that’s about it. And the cell phone stops for three days. You come out of there feeling pretty relaxed. They recently brought internet into the Lees Valley, and we ended up hooking into that. It’s convenient, but I’m not sure it’s a good thing.” 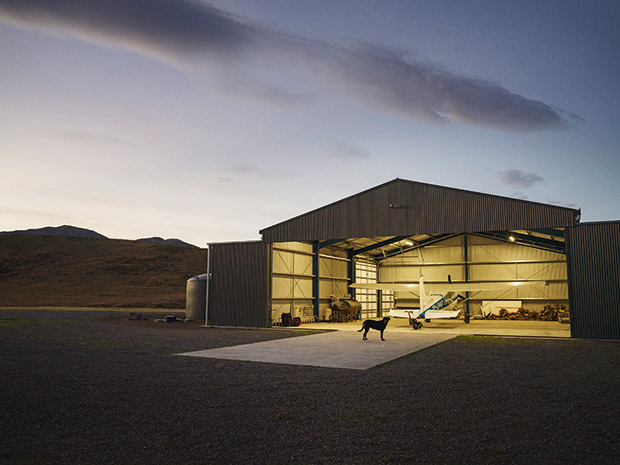 DPG tucked up for the night. The plane’s hangar is situated at the other end of the Thompsons’ living quarters.

Yolande visits Glenburn to relax: “It’s so tranquil. It’s a great place to get away from life’s demands. I go there for a rest — unless there are musterers to cook for. When they’re hungry, they’re really hungry. I’m probably more social than Craig, so I do find it quite isolated, but we’ve made some lovely friends in the Lees Valley, so I like catching up with them.”

Craig’s daughters weren’t surprised that their dad wanted to live in a hangar with his plane — they’re fond of the Cessna too because he would fly them to the coveted Smiggle stationery shop in Queenstown from Smiggle-less Tīmaru when they were younger.

Lyndon, meanwhile, would surely have been delighted to see his son shacking up with that boomeranging Cessna. As for Nanna — she’d probably just be relieved that Craig’s aerial antics involved flying a plane the right way up. 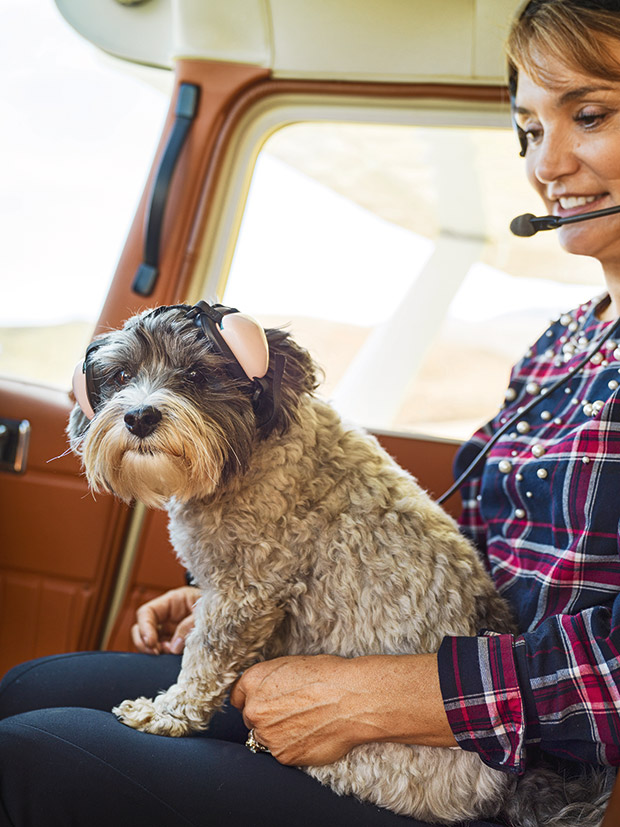 The Thompsons’ dogs, Wave and Mimi, are both happy flyers and have bespoke headgear for Cessna trips to Glenburn. Craig says: “We put mutt-muffs on them because their hearing is so heightened, and the propeller on DPG is quite loud and could damage their ears.”

Once farm-side, they display markedly different approaches to high-country station life. Yolande’s dog Mimi is a pint-sized maltipoo (maltese-poodle cross), and is not especially gifted on the farming prowess front. Craig’s dog Wave, meanwhile, is a livestock-savvy huntaway. 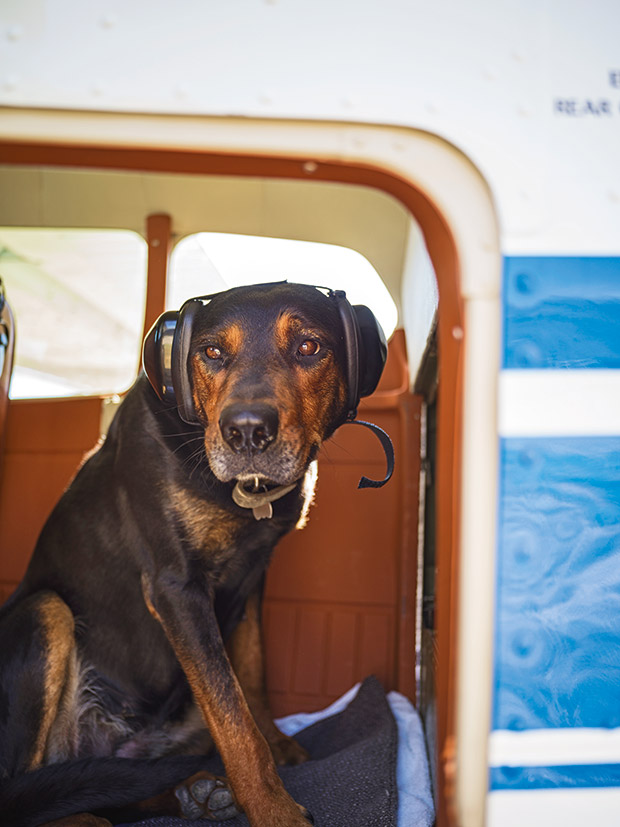 But, as 10-year-old Mimi is the senior canine of the household, she wields some (unfortunate) influence. Yolande explains: “She’s all over the bunny hunting. The big dog has picked up some pretty bad habits from her. He chases the bunnies towards her because she can’t run as fast.”

Craig adds: “It’s not so good when you’re mustering. They just want to chase the bloody rabbits.”