An ordinary bike ride turns into an extraordinary lesson on living in the present.

I’m wondering if this was such a good idea. Sweat and raindrops run down my face. I’m halfway up a hill, pressing into the wind, gasping for air. My heart pounds. My thighs burn. My idea? To rediscover Auckland on a small Brompton folding bicycle. And in the process, shrug off the dystopian shadow of recent months.

I turn into Coronation Road, an Epsom street lined with stately homes, pūriri, and kōwhai crammed with canary yellow, bell-shaped blossoms. The wind has spread a golden hue across the footpath.

Tūī flit among the yellow — black shadows with flashes of iridescent blue. A group squabbles over nectar. Then it hits me — their singing. What was once part of the white noise of life suddenly fills me with a sense of wonder. Bells and yodels, clicks, cackles and chuckles, warbles and whistles — so many thrilling cadences emerge from the tiny quivering throats with bobbing white bibs. Then I hear something else: a strange series of overlapping notes, a harmonic. Later, I discover tūī have a dual voice box, capable of singing two pitches at once. At that moment, I feel as if the tūī serenade is all that’s needed to shift the shadows, to make the day, the world, and living in it, worthwhile.

An unkempt berm is a sea of tremulous dandelions, arcing their golden faces towards the sun, which glows faintly behind clouds. Jasmine and lavender waft in the spring air as if I’m cycling in and out of pockets of perfume. On a power line, a solitary thrush sings. I am its only audience.

It’s early evening in Coyle Park in Point Chevalier as I push my bike along an undulating path. From a bench, I see the harbour bridge framed by tall pines with the demeanour of great age. In the olive-green canopy, there are sudden leaps of colour — rosellas. They chuckle and toss taunts at each other, then swoop down to the grass and play tag. Their happy sounds mingle with the laughter of children in the playground. Then, high in the ancient pines comes the sound of discord, a loud squawking emitted by three herons, who thrash about before flying off in search of another perch.

More stories you might like:
Kiwi journalist Venetia Sherson works in The Open Book in Wigtown, Scotland 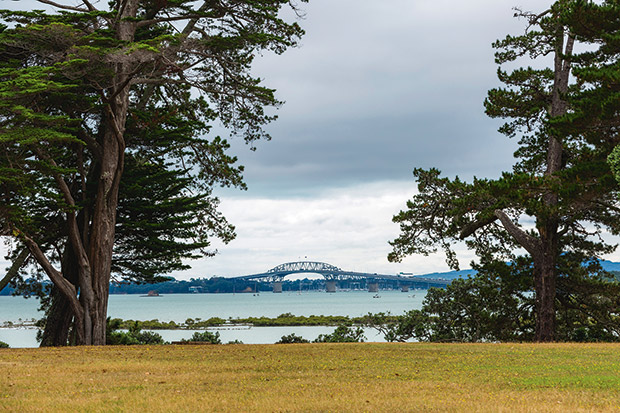 This feeling is strengthened when I discover a small, white-painted box on two wooden posts: a little community ‘library’, where people are free to take and leave books for others. On my rides, I discover them all over Auckland’s suburbs. I feel the heart of the city beating in these little libraries fashioned by the community for the community.

It’s windy and cold, and the park benches are deserted when I arrive at Taumanu Reserve at the Onehunga foreshore. The waterfront runs parallel with the ribbon of motorway that dissects it. Once an industrial wasteland, today, the foreshore is regenerated and part of the Waikōwhai Walkway. It’s now a place of gently waving grasses, hillocks, weaving walkways and small boutique bays where water laps against white sands that have been transported from Pākiri Beach. A souvenir of uglier days remains — tall, skeletal pylons stand in the water, around which the eye and birds in flight weave.

I grab a coat and woolly hat and, while sipping soup, watch tōrea-pango (black oystercatchers) fly in clusters so low to the sea I feel sure their wings will clip the water. Along the shoreline at low tide, they fossick among the rocks looking for lunch and, with their long orange beaks, hammer shells open. It’s a formidable task. I admire their tenacity.

A boardwalk over the water at the shoreline snakes around the cliff contours. Pōhutukawa cling to the clay faces. Life looks tough for them. Battered by salty seas and harsh winds, their sinewy roots, like plaited ropes, spread out, seeking entry and security in any available crevice.

One windy day, I turn off Hillsborough Road and head towards Monte Cecilia Park.

I circle the Pah Homestead with its collection of outdoor sculptures and hunker down between the roots of a moreton bay fig. Despite their embrace, the wind still reaches me, so I head off across the lawn with its sweeping views towards Onehunga. On the other side of the park, sheltered by trees, a small gateway leads to the St Francis Retreat Centre. I discover a labyrinth in a lost corner of the grounds, sheltered by tall trees. It’s rudimentary and overgrown, but the track of small bark chips is still visible.

Why not? I think. I step onto the trail. The path weaves back and forth, spiralling in on itself and, without any real intention, I fall into a walking meditation. My hand brushes the slender paspalum that softens the edges. My footfall is soft and uneven. A thrush sings. The grass smells wet. The air is heavy with moisture. For a delicious, calm, empty slice of time, I’m lost in the labyrinth.

I lock my bike near Auckland Art Gallery Toi o Tāmaki. The columns of swamp kauri in the forecourt fan out to support the roof — architectural metaphors for actual trees. There’s an exhibition by Bill Culbert: black and white photos of light reflected off everyday objects — a glass of wine, a jug, a row of illuminated plastic milk bottles. One minute, they’re everyday, utilitarian items; the next, they’re works of art. My perception is altered, and I feel invigorated.

The experience lingers. I find my attention drawn to how light plays on surfaces all around me. Sitting in the gallery café, gazing over the rim of my cup through the window into the Albert Park forecourt, I notice the flickering light playing on the surfaces of the ‘conjoined twins’, who pivot from the hip and play endlessly with the surrounding light and shadows. The twins are Double L Excentric, a kinetic sculpture by George Rickey, two large brushed-stainless L-shapes hinged together and pivoting in the wind. 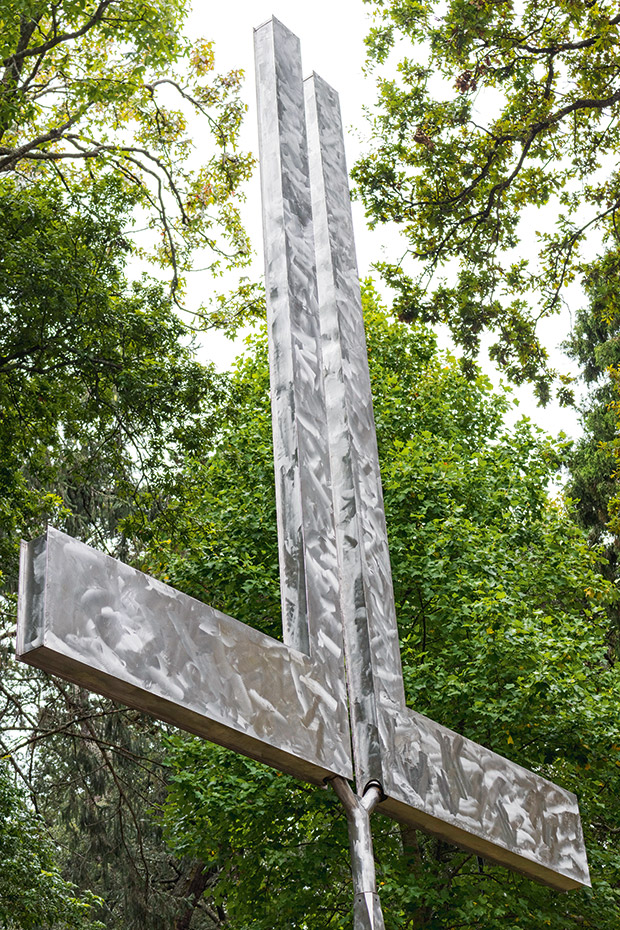 Cycling along the eastern waterfront heading towards St Heliers, the sea has horizontal layers of turquoise and blue and grey that mirror the cumulus clouds and seem to stretch all the way to Rangitoto Island. I pause at Kohimarama. The sea is peppered with small waves, and the wind is sharp.

I’m surprised to see swimmers and even more surprised when a man who reminds me of the ancient pines in Coyle Park walks gingerly to the water’s edge. He is locked at the hip, shaped like a C. It’s bloody freezing, but he doesn’t hesitate, diving in and swimming. His stroke has a lopsided elegance, and his push is confident. He swims perpendicular to the beach, and soon all I see is a tiny dot as he circumnavigates a yellow buoy bobbing in the distance.

I encounter death at Tahuna Torea, on the spit, a finger of sand that reaches into the Tamaki Estuary. On one side of the spit is the harbour; on the other are wetlands. Midway are two dead trees, one stripped bare of bark and bleached a porcelain white, the other leafless, transformed into a charcoal silhouette. But when I look closely, I see the tree corpses are teeming with tiny life: scurrying ants and burrowing beetles. Later, I see swans with long sinuous necks followed by clusters of grey cygnets. The circular rhythm of life unfolds at Tahuna Torea, and I am part of that rhythm. 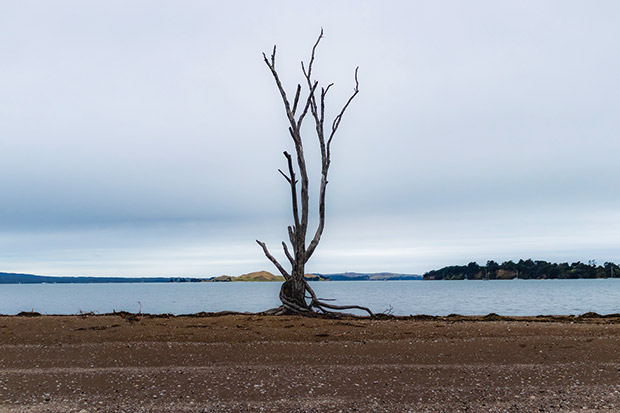 A track and boardwalk circumnavigate the reserve. I meander through wetlands leading to an inlet surrounded by mangroves. Slender dragonflies glinting metallic blue and turquoise hover with invisible wingbeats at the water’s edge. There’s a swampy, sea-salty smell. The air is still. The water is still. The trees are still. Even the blades of grass are still.

In the languid air, I am also quietened, staring at shifting reflections in dark waters, when into this watery stillness treads a long-legged heron. It pauses, stands for a while, lifts one leg, contracts its foot, then spreads its spidery toes and re-enters the water without a ripple. I feel myself open out, embracing the poise and elegance. I want to be that heron. To move through the world without a ripple.

Then it unfolds its wings and ascends in a generous arc. The blue sky slides beneath it, and, after a few minutes, it dissolves into clouds high on the horizon. Maybe it’s all in my head, but when I leave Tahuna Torea, my tread and thoughts feel lighter.

One evening, as spring fades to summer, I pull over to the kerb in Cornwall Park and look at the sky, a deep iridescent blue, clear and infinite. An apricot-coloured crescent omits an incandescent glow. Reflected light from the earth fills out the balance of the orb with a soft, pale pastel so that the full moon is there, but it’s not. In this very instant, the moon is in an intimate embrace with Jupiter on one side and Saturn diagonally opposite. They release an arrow of diamond white that seems to penetrate me.

Standing under this celestial splendour for a fleeting moment, I forget myself, and a silence falls upon my mind. And in that silence, I feel… exhilarated. Free. Turns out this was a good idea after all.