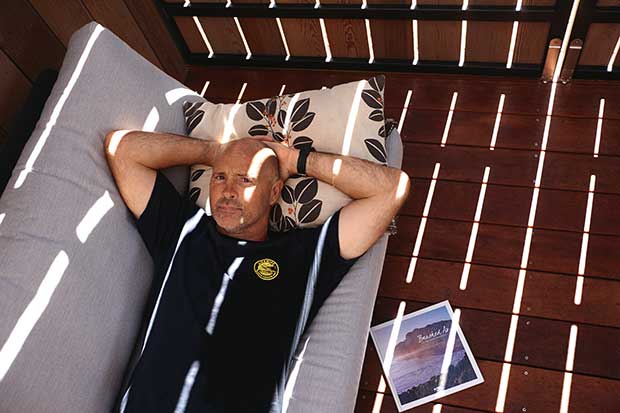 Popular TV builder John Cocks is a keen diver who refuses to simply go with the flow: although his body is ailing, his maverick spirit prevails – so there’s no cause for the undersea critters around Tairua to rest easy just yet.

Grabbing a crayfish is a hit-and-miss affair. At times, when John ‘Cocksy’ Cocks goes diving at Sailors Grave near Tairua, the devious crustaceans loiter by the rocks just begging to be caught. Other times, the sneaky buggers retreat to safety in the cracks, with not a feeler in sight, before he’s even taken the plunge.

He’s been hunting for, and waxing lyrical about, the cunning cray in these waters ever since he was a nipper – but it’s harder for Cocksy to dive these days. He has kidney cancer, terminal, and the disease has spread to his lungs and back. Cedar cladding seamlessly wraps into the entrance, and guest bedroom and bathroom.

Weights distributed in his buoyancy-control device take pressure off the tumour in his lower back. “The standard weight belt made it too painful to dive. It’s about adapting so you can carry on doing the things you love.”

But living with the disease (Cocksy doesn’t like the ‘C’ word) is a bit like searching for brawny crustaceans: sometimes you come back with a bag full and sometimes the crayfish wins.

“It’s me versus the crayfish. If I catch one, it’s mine. But if I miss out, I have no qualms and think that it was meant to get away, or I just wasn’t quick enough. But I’d never stop trying because I failed. 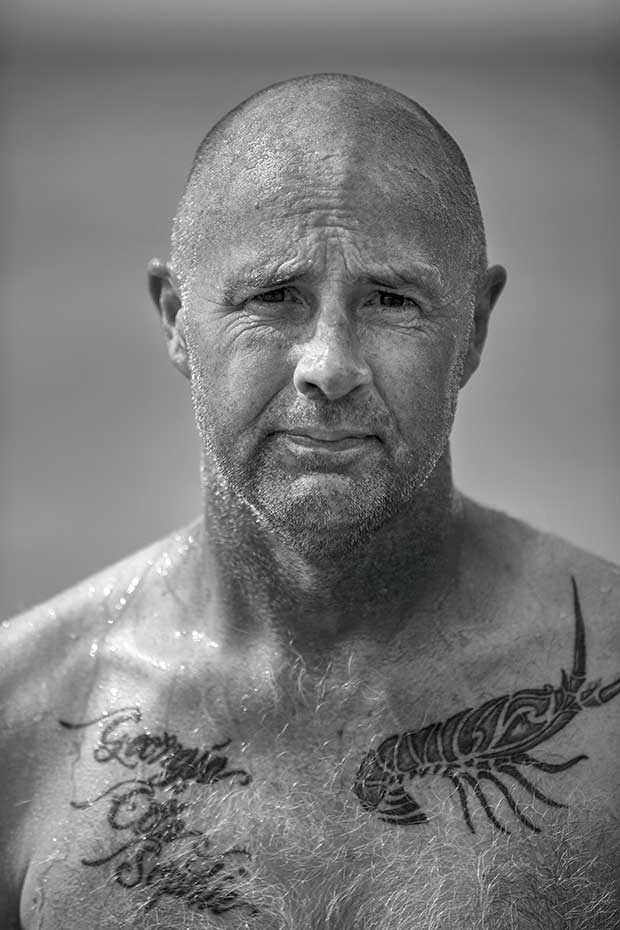 Cocksy’s crayfish tattoo and the names of his three daughters are close to his heart.

“I feel the same way about this disease. They gave me two years to live – which I’ve already outlived – and I’m trying for 10 more years.” Optimistic, sure, but Cocksy is not waiting to be swept into the disease’s wide net.

He is familiar to many from DIY reality television shows such as My House, My Castle and April’s Angels where he was the Mr Fix-It and often the voice of reason on a drama-filled building site. After leaving the small screen, he started a building firm specializing in individually designed houses, working closely with architects. 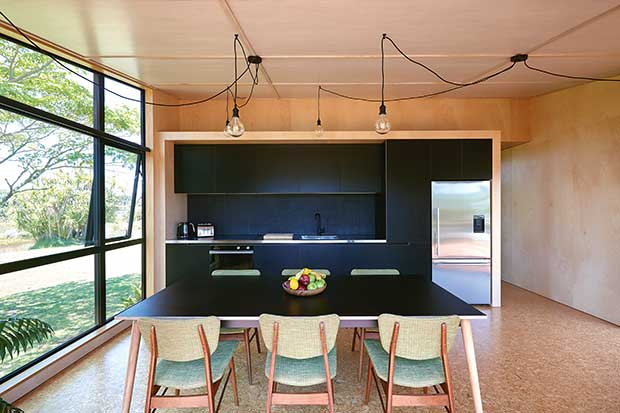 The kitchen, by Cronin Kitchens, features a matt-black rough-textured tile in contrast to the sharp, smooth finish of the black HPL cabinetry. Cocksy made the kitchen table himself to fit the space and restored the secondhand chairs in the evenings while building the house.

The 51-year-old is no longer building for clients but making the most of the life-insurance payout which followed his oncologists’ decision that, statistically, he had only one year to live.

“It’s a strange thing to get your head around. You think, ‘Yay, no more money worries’, and on the other hand, ‘Hmm not long to spend it’.”

Last year, which turned out not to be the last year of his life, he built his own castle. The 97-square-metre, cedar-clad home is shaped like a kite and points towards Tairua’s Mt Paku. 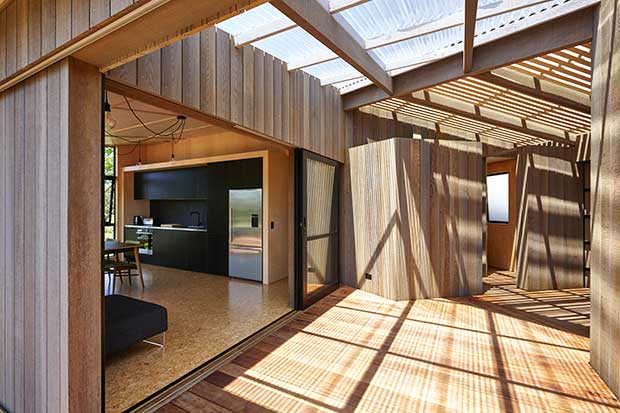 An angular house design leaves no room for building error. Mitred external corners were biscuited together and glued with epoxy, a labour-intensive process. Kwila decking in the breezeway continues onto the two outside decks while polycarbonate roofing adds to the bachy vibe creating theatrical shadows in the afternoon light.

And she’s a beauty. Plumb. True. Angular. Precise. She’s an example of meticulous craftsmanship; the interior linings are 9mm poplar with a 0.6mm birch veneer with a negative detail to the joinery frames and mitred external corners. To the average Joe or Jo, the house is simply beautifully made.

Cocksy built it largely on his own. Friends and family lent a hand with the framing and putting on the roof because, at the time, he was feeling the side effects of drug treatments and unable to lift heavy weights.

“There’s no engineered steel, it’s straight out of building code 3604 [3604 is the building code relating to low-rise timber-framed dwellings]. It is a testament to what can be created with wood and a few nails. I love the feeling of timber and working with my hands and my brain. 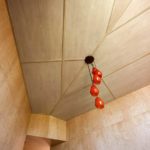 The whitewashed plywood ceiling in the lounge has cedar battens over the joins which emphasizes the angular house design. 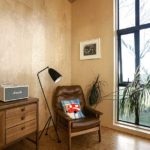 The room is furnished with mid-century pieces to give a retro bach feel including a secondhand vinyl chair and Lawson cypress circle sideboard. 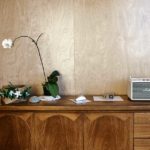 The house interior is poplar ply with birch veneer. 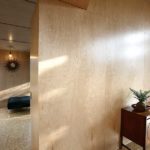 The ply, in consideration of his health issues, was light enough for Cocksy to carry on his own.

“Providing people with a roof over their heads gives me a good feeling. In my business it didn’t matter if I was building a million-dollar mansion or a 100-square-metre box, we did it with the same degree of precision. I’m confident to say that all my new builds were level, plumb and straight.”

When Cocksy came to design and build his payout home, it had to be on the Coromandel. He had spent his childhood at Cook’s Beach and regularly visited Ocean Beach in Tairua, a favourite spot for sandcastle building. There are plenty of reading spots around the house, including the breezeway daybed, which also doubles as extra sleeping for visiting guests in summer – but Biggie Smalls the dog isn’t fussy about resting places.

He has lived in Tairua permanently several times in his life and his three girls, Georgia (23), Ella (20) and Sophie (19), went to school there at one stage. Now Tairua is once again home.

“It’s about a sense of place – your tūrangawaewae. I grew up here, I came back here; I could never leave it for some reason. And I want my kids to have a place here.” 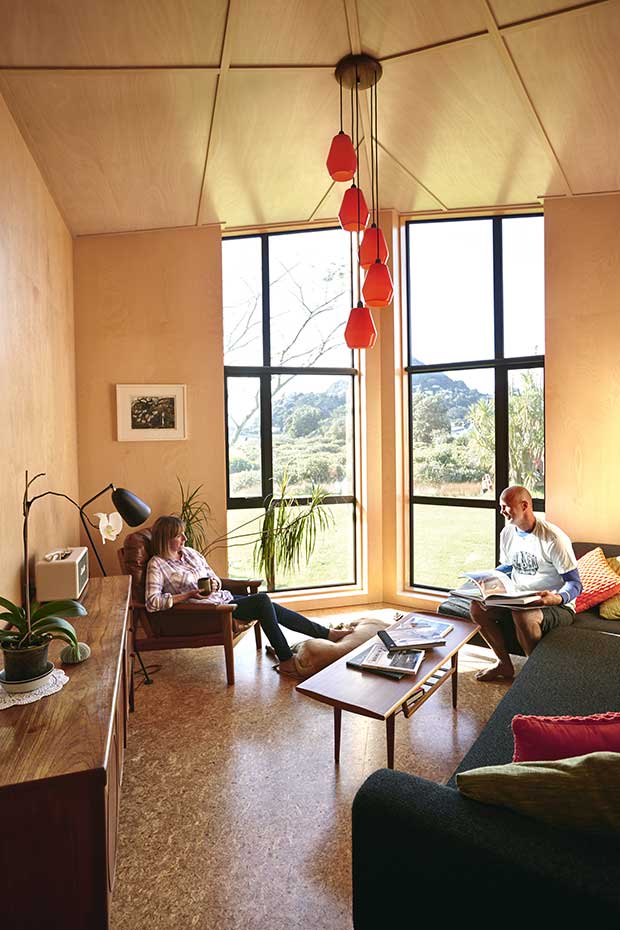 He designed the house himself, sketching it on the wall of the then family bach known as the maimai. While building it, he lived in that uninsulated, cold-as-a-fridge maimai. He says the routine of getting up each day, walking the dog, making toast, putting on the tool belt and getting cracking was his way of flipping the finger at his disease.

“This place became my focus and it was part of a goal I had to achieve. When I was younger, I heard the author Bryce Courtenay say, ‘If you have a dream, follow that dream as there are not enough dreamers in the world.’ At that time, I had a dream to be on TV, so I did it.” It turned out to be as easy as auditioning. Cocksy, Dana and daughter Ella relax on the deck.

Next on the Cocksy goal list is the construction of a sleepout (an equilateral triangle-shaped hut with a 45-degree corrugated-iron roof). Following that, the maimai will be disassembled to make way for a garage with another sleepout.

He isn’t good at sitting around although his back has other ideas. A most un-Cocksy-like reclining position gives him the most relief.

Tairua is also meaningful to Dana, Cocksy’s wife. The couple, who met at an event for children’s charity Variety a few years ago, married on Ocean Beach in June 2017 with the reception at the local hall. 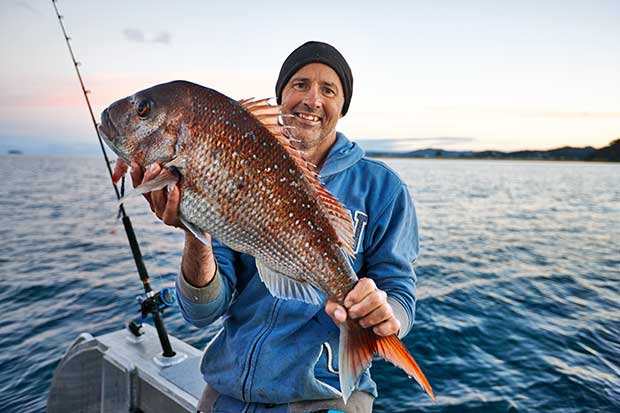 Tairua is an excellent spot to catch snapper, kahawai and the odd kingfish.

Dana, a general manager of sales and marketing for a transport and tourism company in Auckland, spends a few days each week with her husband at Tairua. There are plans afoot to spend more time there and work remotely.

In summer Tairua sizzles with holidaymakers. The new house teemed with guests drinking beer on the deck while Cocky’s daughters played animated rounds of Articulate at the kitchen table. In winter the town simmers down. 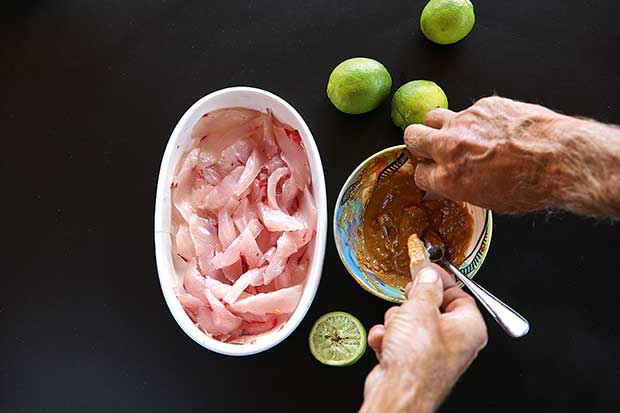 Cocksy has a smoker but also likes to make sashimi with a wasabi avocado soy dipping sauce.

There are just 1200 or so permanent residents, baches are empty and the streets dark at night with only a sprinkling of houses aglow. It’s when Cocksy likes this place best.

“I love the emptiness of the beaches in the morning; I don’t like the rush. I enjoy people visiting, but the off-season is my favourite time. Everyone knows me here and I know everyone; I’m a small-town guy.” 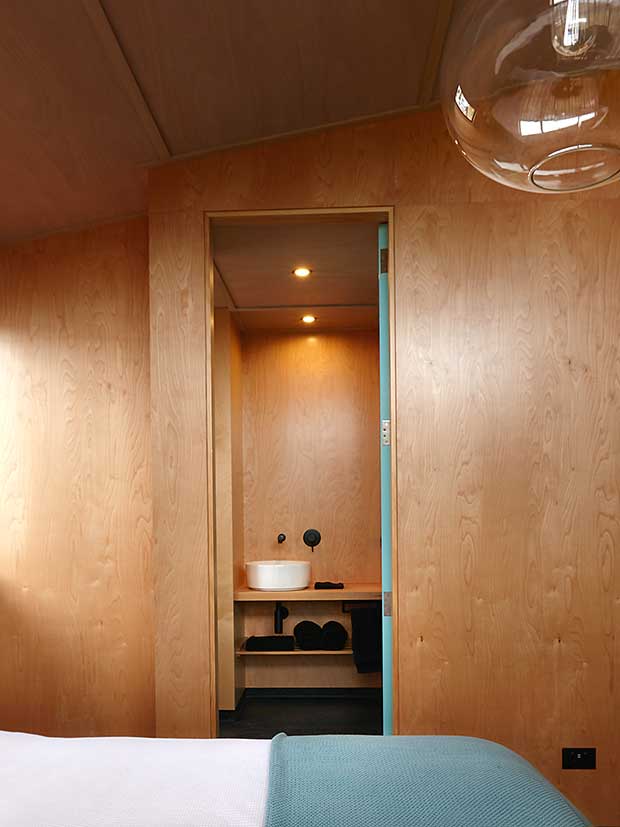 The master bedroom en suite is simple but has everything a person could need.

Cocksy surfs and dives throughout the chilly months and takes morphine for the pain in his spine. His unfunded infusions of the immune-boosting drug Keytruda require regular trips to Auckland.

The only thing he’s stopped is playing rugby and it has been hard to stand on the sidelines. “Rugby has done a lot for me over the years, so I still support and sponsor the local club. When you live in a small town, you get out what you put in – you have to participate. So I wanted to stay involved. The town comes alive when there’s a game on.” The guest bedroom is painted a retro mint shade using a brush for a hand-finished look.

Even though the Tairua house is his full-time home now, there are parts of it that remain deliberately unfinished. The soffits are unpainted. To Cocksy, this represents bach architecture.

Baches are built in a rush and often remain unfinished. When he builds the garage and the new sleepout, they will also start life unpainted. But someday that will change. 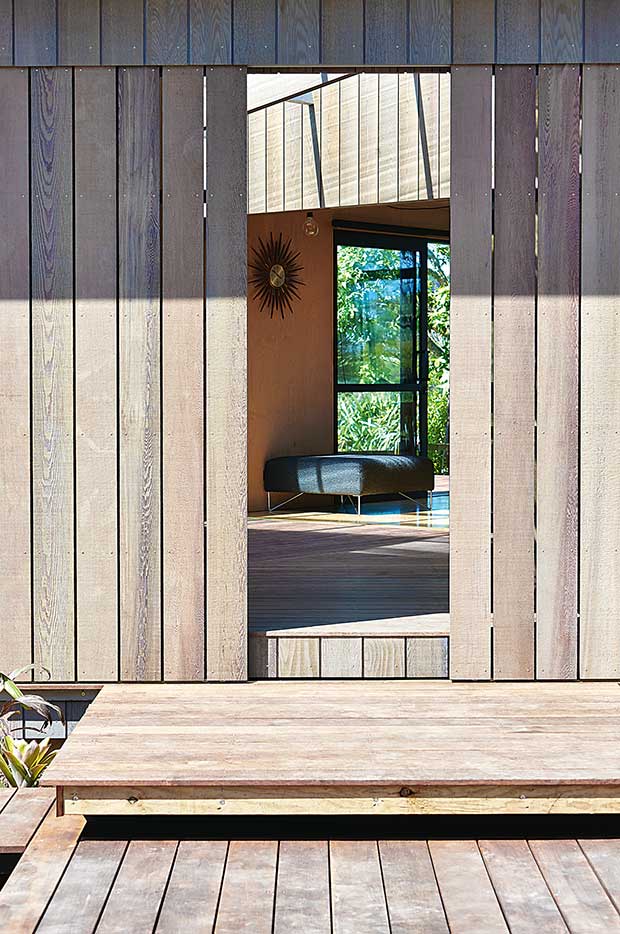 Exposed half-round battens over the joins continue the 50s bach feel; the second deck grants access to a garden where a mandarin and a peach tree thrive despite the sandy soil.

“The garage will be painted by the relations on a weekend and there will be a rawness and roughness to it. I don’t want to get professionals in to do a perfect job – the idea is to get the family to leave their mark on it. We can turn up with our paintbrushes and pails and get paint all over ourselves. One day we can look back and ask, ‘What year was it that we painted the bach?’ That’s the kind of conversations I want to come out of it.”

Cocksy might not be around for the garage-painting day. 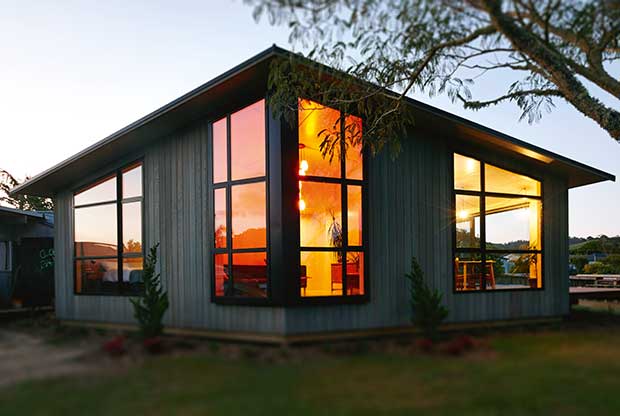 The kite design can be seen in the two extremes of the home. Large angular windows in the lounge, kitchen and master bedroom are a feature while the back of the house is the ‘tail’ of the kite where the laundry is tucked behind hinged doors.

He can’t ever really be sure what speeds or slows this crafty bugger of a disease. However, he does have goals. And dreams. And before the painting, the garage plans need finishing and there is an ocean full of kaimoana to catch. 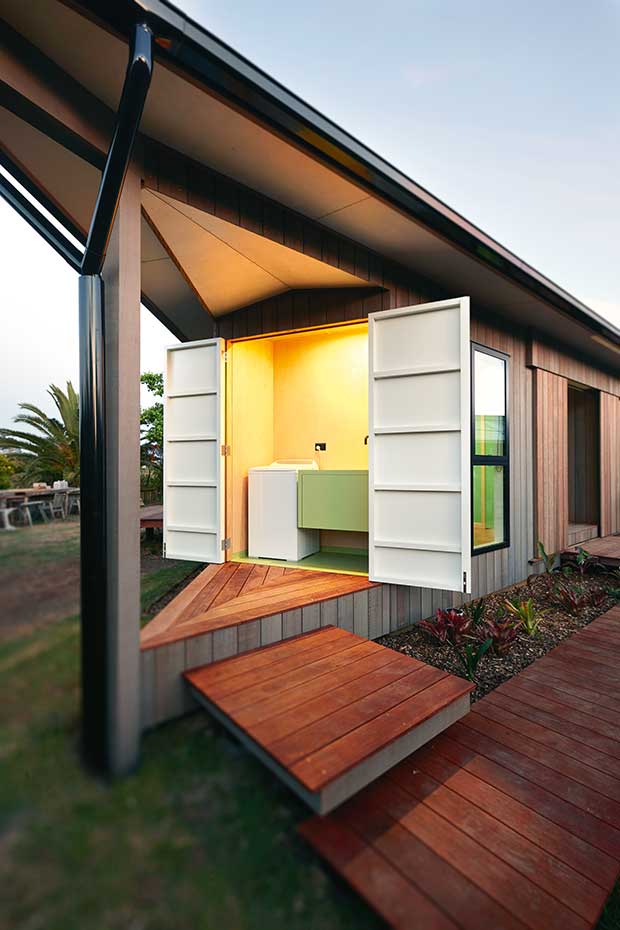 IN HIS OWN WORDS

Cocksy has a way with words. His first job, as a hot metal typographer for a Paeroa newspaper, could have progressed into sub-editing at the paper. But he chose to go building because he wanted to work outdoors with his hands.

His fondness for words has not vanished and the Cocks family love to play word-based boardgames.

Cocksy proudly boasts that he recently won against his mum (a true Scrabble fiend). His daughter, Georgia, says he is quite the poet and his poem on Tairua was published in Craig Levers’ Beached As Vol 1. 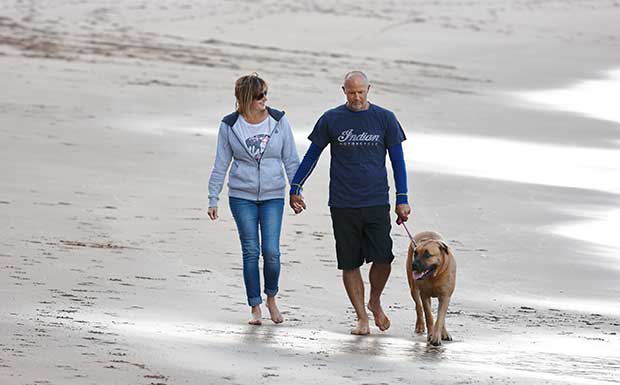 Biggie Smalls, a mastiff-labrador cross, gets two walks a day along Ocean Beach where Cocksy and Dana were married in June 2017.