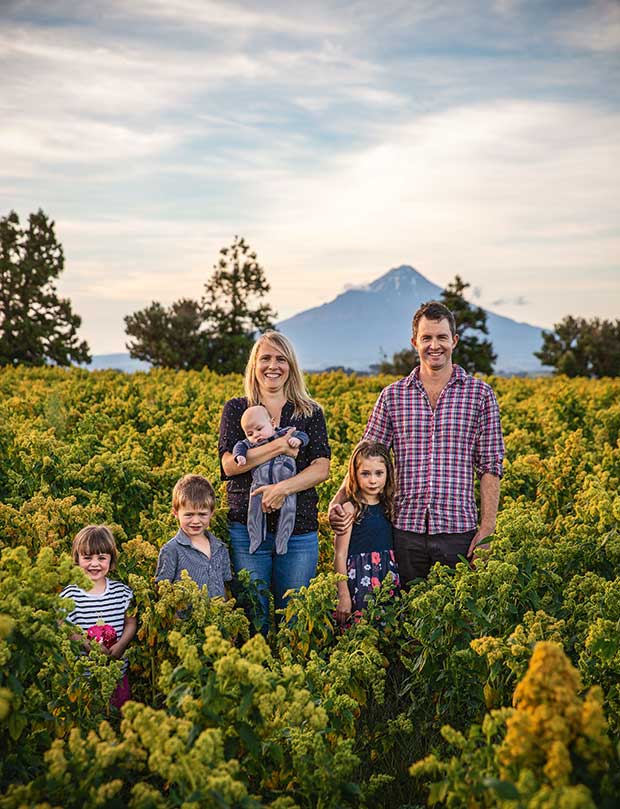 Kate and Hamish Dunlop and their “sprouting” family. (From left) three-year-old Annabel, four-year-old George, Tom (being held by Kate) and seven-year-old Sophie.

A Taranaki family with an eye on the future have sown their faith in an ancient grain.

At first glance, the lush pastures of south Taranaki look like meat-and-three-veg territory. The landscape is interspersed with dairy processing plants, huge milk tankers dominate the roads and sheep graze lazily across the hills.

But on a farm near Hawera, where the peaks of Mt Taranaki and Mt Ruapehu touch the clouds, a ripple of golden flowerheads are a sign of changes ahead.

Here, a young family think they might have found a way to help solve the planet’s pressing environmental and food-supply issues. 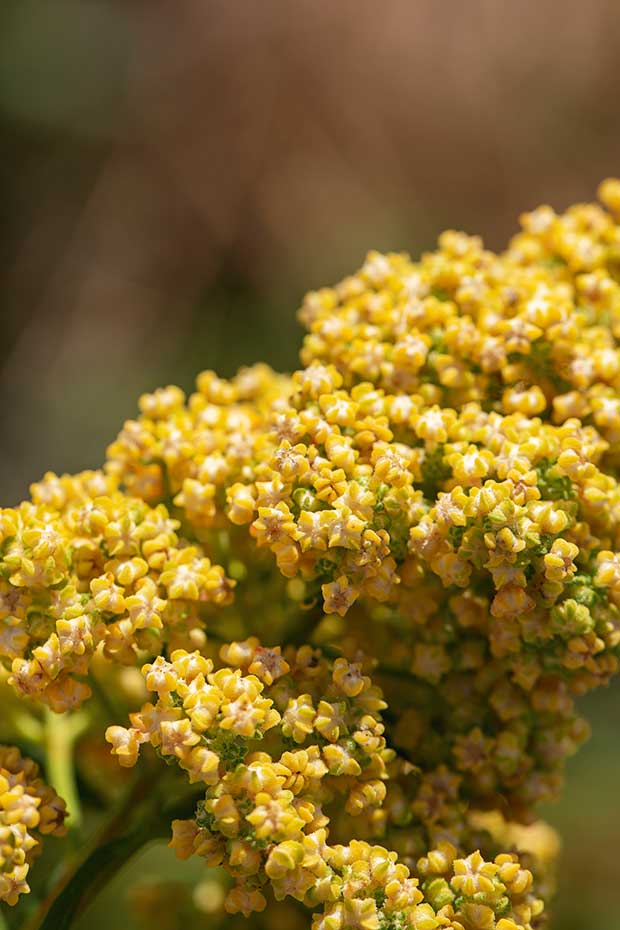 “This is the space the world needs us to be in,” Kate Dunlop says. “We think growing quinoa will help us be part of the future of farming.”

Kate, a former family lawyer, grew up in Taihape. Her husband Hamish, who used to sit on his father’s gumboots so he wouldn’t get left behind when dad went to work, is a fifth-generation Taranaki farmer. They’ve known each other since they were teenagers at Wanganui Collegiate. 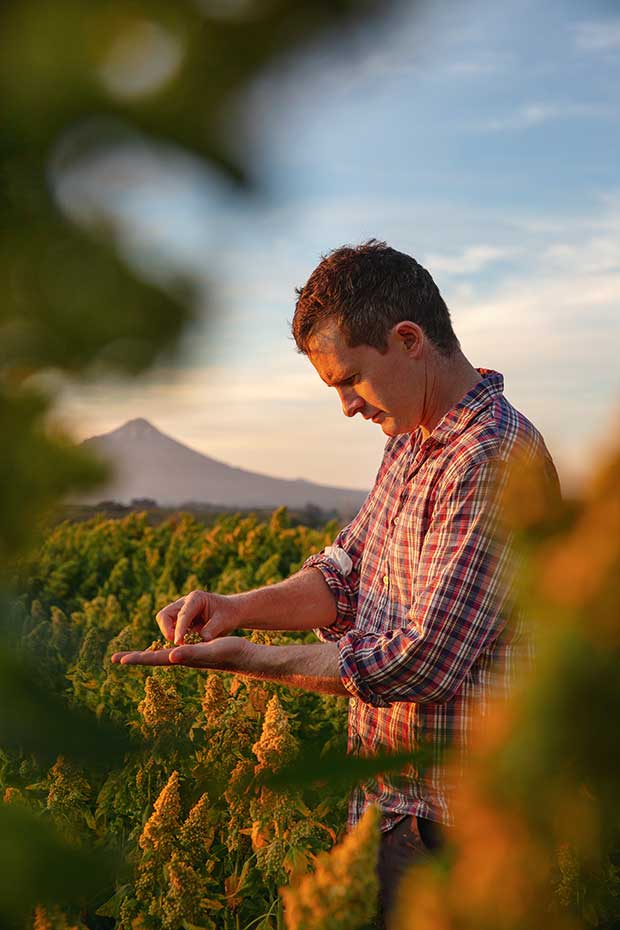 They went their separate ways after school but then reconnected, marrying eight years ago and buying a 1000-acre (about 405 hectares) sheep and beef property 12 years ago in partnership with Hamish’s parents, Jan and Ross. As farmers, they’re committed to operating as sustainably as they can in the here and now. As parents of a growing family, they’re also concerned about the future.

“We want to be able to look after the land and provide nutritious food,” Kate says.

The Dunlops have long been interested in living lightly, and they run their farm accordingly. They’ve planted thousands of trees, fenced waterways and created a six-hectare native QE11 Trust bush reserve since they bought the property. One morning, while discussing a documentary they’d recently watched about plant proteins, they had an epiphany. 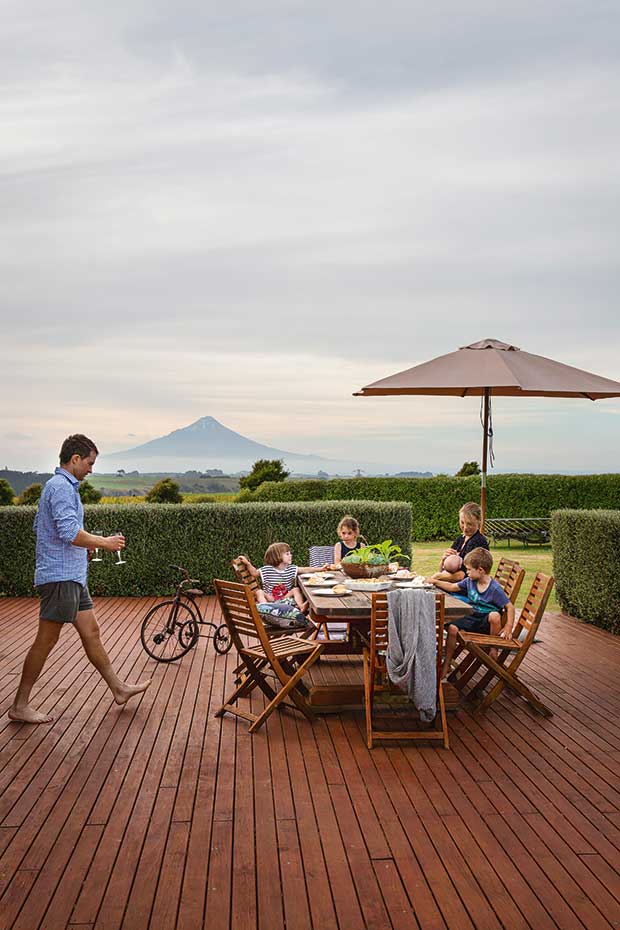 Kate and Hamish knew exactly where they wanted to put their relocated villa — a site on the farm where they can see both Hamish’s mountain (Mt Taranaki, pictured) — and Kate’s (Mt Ruapehu).

“We had been talking a lot about how to feed the growing world population in an environmentally sustainable way,” Kate says. “We’ve always tried to eat healthily, and I had made some quinoa porridge for breakfast. I said, ‘Well, this is good for us, and it’s high protein, maybe this is what we should look into?’”

More stories you might like:
The Wanaka couple behind Wilson & Dorset have a new take on the classic New Zealand sheepskin

It could have come to nothing — lots of lightbulb moments generated over breakfast quickly do — but their interest was sparked enough to start doing some serious research. They cast the net wide, investigating other high-protein plants like chia seeds and amaranth, but kept coming back to quinoa.

“We made an educated guess,” Hamish says. “We called as many quinoa growers around the world as we could to find out everything about it. Everyone we talked to was passionate about this little seed, so that made us think we might be on to a good thing. People were generous with their time and their knowledge.” 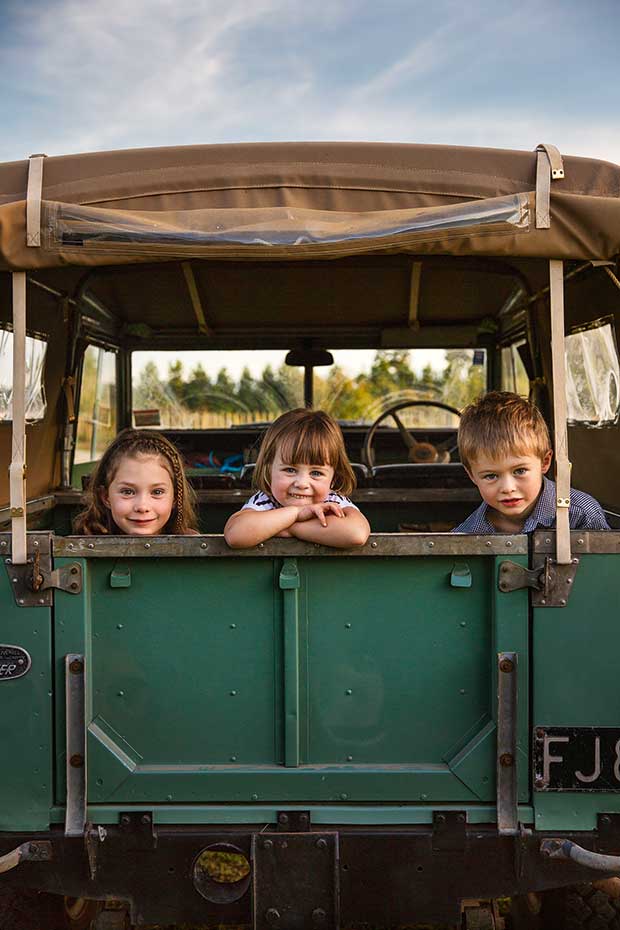 Hamish’s grandfather bought the family’s Land Rover new in 1969 and it’s been part of Dunlop family lore ever since. It was Hamish’s farm ute for a while until his father Ross gave it a spruce up for its 50th birthday. Hamish has great memories of bouncing around the farm in the “Landy” with Grandpa as a kid.

Even so, the Dunlops had to take all the well-intentioned advice with a grain of salt. Most of the world’s quinoa is grown in the Andean regions of South America, and no one knew if it would suit New Zealand conditions.

“Luckily, we like a challenge,” Kate says. “There are over 120 varieties, so we just talked to people and made the best guess we could before we imported a few varieties to trial.”

Slowly, they worked through the process, discovering which seed grew best and figuring out how to naturally manage weeds, so they didn’t have to spray the crop. They were determined to grow it with minimal intervention, almost as if it was growing wild.

“Growing it turned out to be the easy bit,” Hamish says. “The quinoa jumped out of the ground, but so did the weeds. Once it’s germinated, the plants take 90 to 120 days to get to maturity. Then we had to figure out how to harvest it.” Now the next generation of little Dunlops get to add the same kinds of adventures to their memory banks when their parents take it for a drive on the farm with a picnic. Pictured (from left) are Hamish, Kate and Tom, Raewyn Hughes (Kate’s mum). Annabel. George. Jan (Hamish’s mum), Ross (Hamish’s dad) and Sophie.

When mature, quinoa plants are about 1.2 metres tall, with cone-shaped seed heads that gradually turn from pale yellow to dark gold. When it came to harvesting, the Dunlops’ first hurdle was finding a combine harvester, which are rarer than the proverbial hens’ teeth in dairy farming territory. Even more difficult, they had to find someone to help with the challenge of processing it.

The at-first-sceptical owner of a seed-processing plant in Palmerston North turned out to be one of their greatest allies, so they could then start thinking about getting their quinoa to market.

“We control every element of it from the seed in the ground to the packet on the shelf,” Kate says. “I think that’s important because people do care about where their food is from and how it has been grown. Our product has real integrity, and we stand by that.” Still, learning how to sell it, especially having to put themselves in the frame, has been confronting. 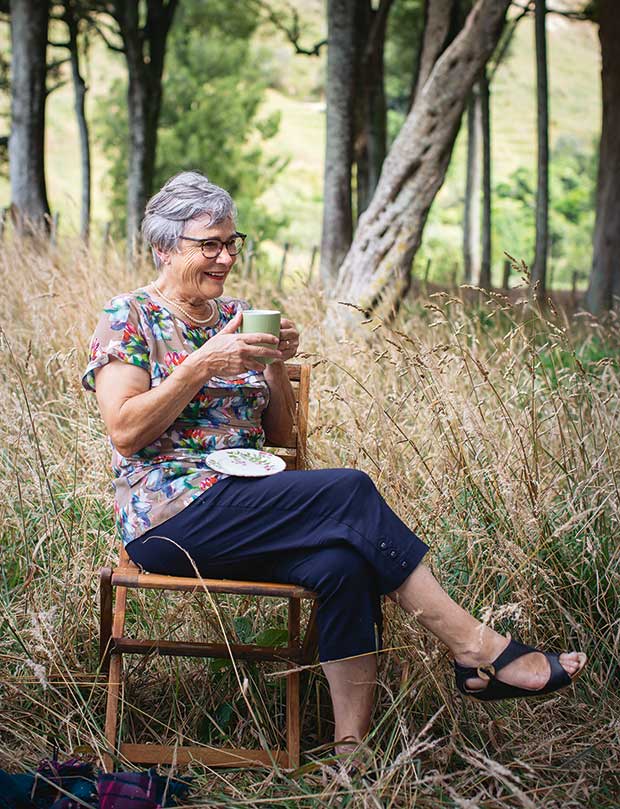 “We’ve had lots of help from friends and family, but we’re a bit shy about putting ourselves out there,” Hamish says. “I think that’s been the most challenging part.”

Now in their third year of commercial production, the Dunlops yield about a tonne of customer-ready quinoa per 4000 square metres. 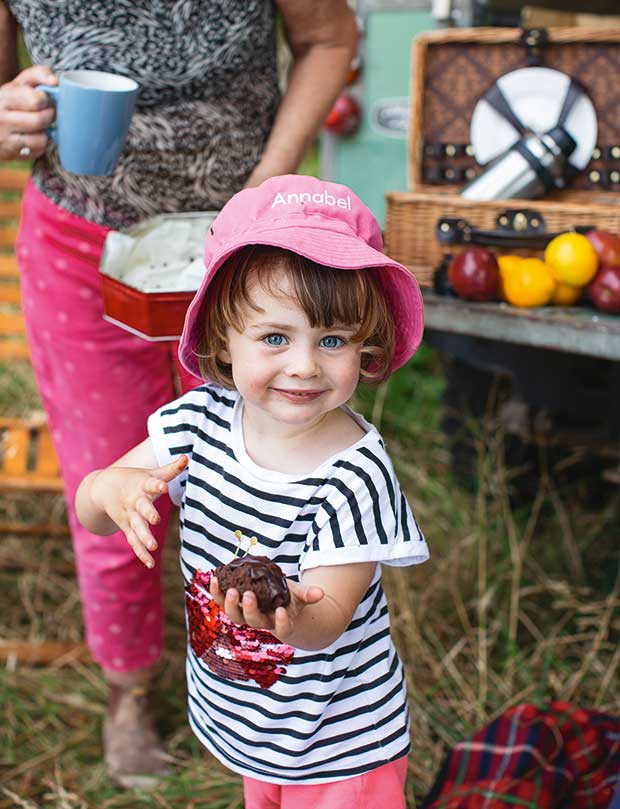 “We’ve had some great harvests and it’s exciting, but it’s been tough,” Hamish says. “A couple of days before our first commercial harvest, we had about 10 centimetes of rain in a day. We thought, ‘oh no, it’s all going to be washed away’, but it was fine. It’s quite a resilient plant.”

“We have had quite a lot of ‘Oh no, what were we thinking?’ moments at 3am,” Kate says. “But we are lucky to have support from our families and friends. It’s also been great to connect with other food producers in New Zealand. Because we’ve had to do everything ourselves, it’s so good to be able to sit down and share ideas.” 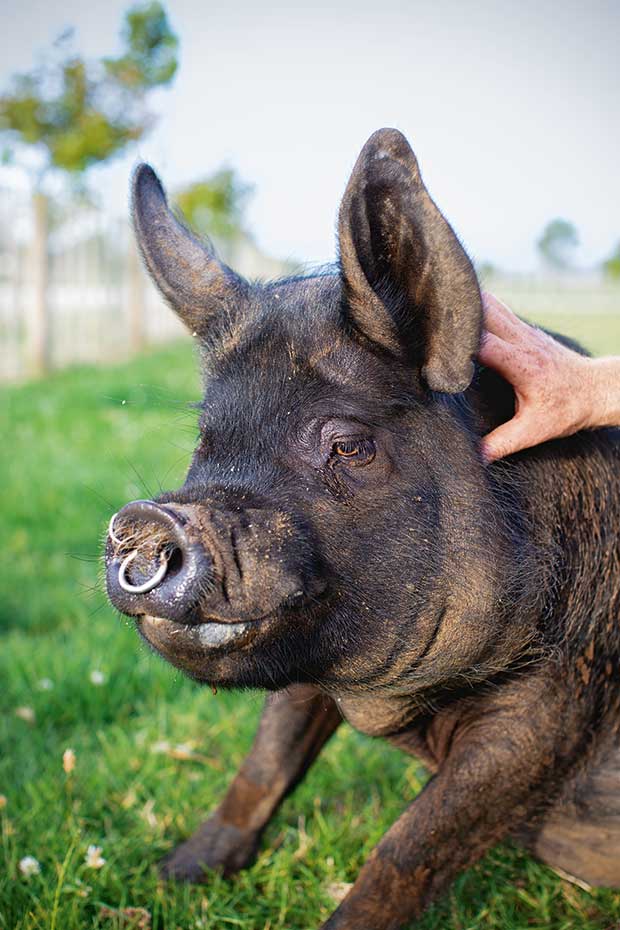 Huhu the pig is an important family member, along with five working dogs and a recently adopted cat called Macy.

Starting any new venture is tough, but the Dunlops have also juggled their foray into quinoa with running the rest of the farm and cultivating another set of little sprouts. Their family has grown to four children — seven-year-old Sophie, four-year-old George, three-year-old Annabel and placid baby Tom, born in November 2018. Tom’s not quite up to eating quinoa yet, but the other kids lap it up, Kate says.

“They love it. Initially, we had lots of people tell us that they’d tried it once and it wasn’t for them, but once you get confident using it, a world of possibility opens up.” 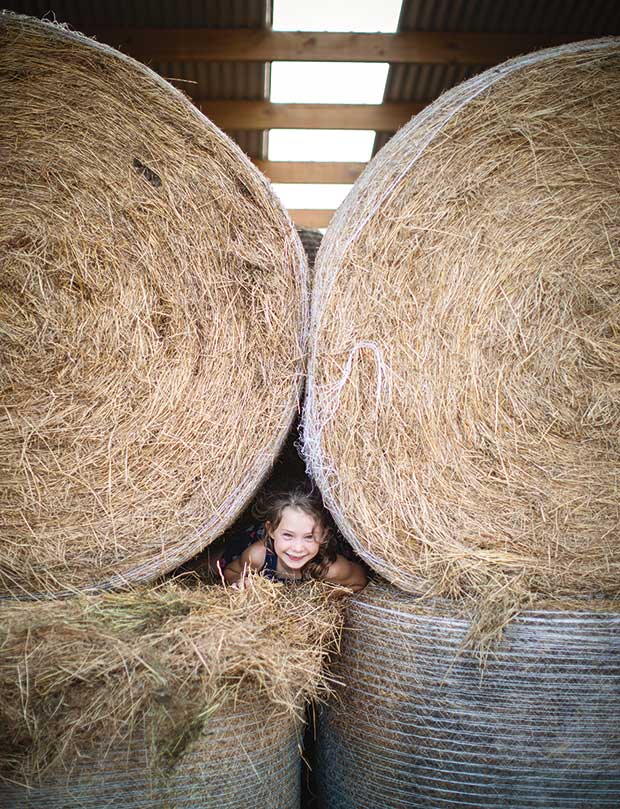 They might have a way to go before some of their neighbours develop a taste for quinoa, but the couple say they’re part of a growing tide of innovation on New Zealand farms.

“We were already producing nutritious, high-quality protein — quinoa is just the next generation of it,” Hamish says. “All businesses have to evolve or die, and for us quinoa ticks a lot of boxes. We already had the land resources and the cropping skills, so it was pretty logical.” Kate and Hamish have always kept an eye on the future for their sheep and beef property, wanting to ensure its continuation for generations to come. They’ve lost count of how many native trees they’ve planted (“thousands,” says Kate).

“The nutrition you can get per hectare is impressive,” Kate says. “It is an effective way to use a small amount of land to feed people nutritious food.”

Quinoa (pronounced keen-wah) was first recognized as a superfood by the Incas of South America, who called it the “mother of all grains”.

It’s a seed, rather than a grain, and is closely related to beetroot and spinach. Quinoa is highly valued for its nutritional powers — it has roughly double the protein of rice, and is one of just six plants in the world that are a complete protein, which means it contains all the essential amino acids the body can’t make on its own. It’s also gluten-free, low-GI and a good source of dietary fibre, minerals, vitamins, antioxidants and anti-inflammatory phytonutrients. Perhaps not surprisingly, NASA is keen on it as a potential food source for astronauts on long space missions.

Quinoa is easy to cook. First rinse it thoroughly in cold running water (this removes any naturally occurring bitterness). Add one part quinoa to two parts water in a pot (for example, one cup quinoa + two cups of water = three cups cooked quinoa) and boil. Cover and simmer for 10 minutes — it is ready when the liquid has been absorbed and the grains are tender. Leave it to cool in the pot to help ensure the quinoa is nice and fluffy, then fluff with a fork and serve. Use it like rice, couscous or add it to baking, salads and smoothies. newzealandquinoa.co.nz

THE HOUSE THAT TRADE ME BUILT

The Dunlops’ stately 100-year-old villa looks like it has always stood on this site, but it’s a relatively recent arrival. Kate, Hamish and their eldest child, Sophie, initially lived on the property in a small farm cottage but realized they were going to need something bigger as their family grew.

About five years ago, Kate was idly looking online when she saw the villa advertised on Trade Me for quick removal from Palmerston North. They drove up the next day and were happy to find that it was the old manse for St David’s Church, built in 1913 but now surplus to a developer’s requirements. The couple admits that it was slightly nerve-wracking waiting for the house and its accompanying garage to make the 170-kilometre journey through the night from the Manawatu, but as soon as the house was onsite, they knew they’d done the right thing. 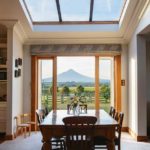 With four young children and a farm to run, the Dunlops say they’re looking forward to one day having the time to landscape the grounds around their villa. 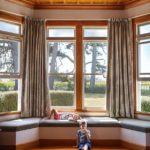 Indoors, they keep things orderly by living in a low-fuss way. 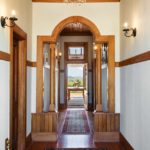 “I’ve always been a minimalist,” Kate says. “I know it’s trendy to say that now but I’ve never liked having lots of stuff.”

They’ve done very little to the building structurally since, apart from putting in a new kitchen and opening one side to capture the sun. They also used recycled materials wherever possible.

“We often joke that this is the house that Trade Me built,” Kate says. “We got almost all the extra materials we needed second-hand from Trade Me, as well as the house.”