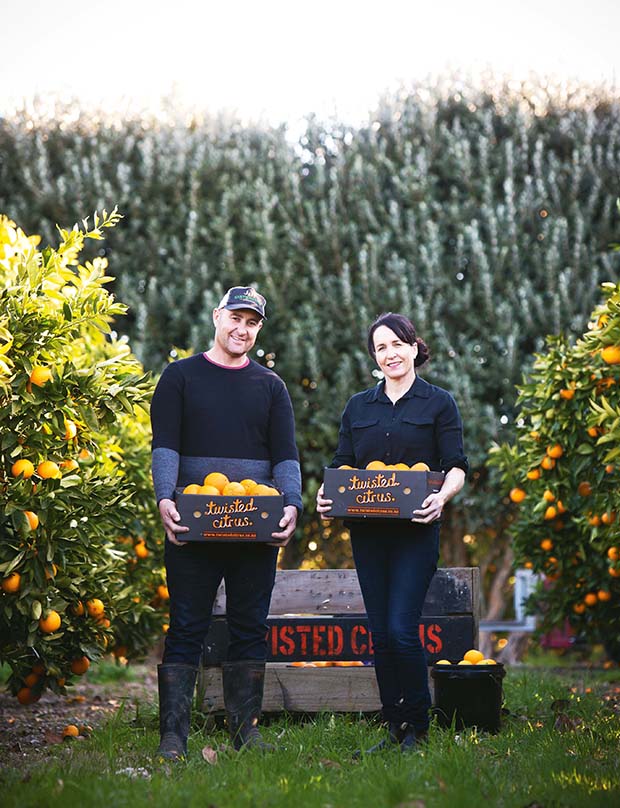 A delivery business with a twist boosts returns for a Gisborne orchard.

Gisborne citrus entrepreneurs Sandy and Bron Kemp have no trouble remembering their first online sale. They were on holiday with their children, riding the roller coasters at Rainbow’s End, when Bron’s phone started beeping, alerting her to the biggest thrill of the day. Their website Twisted Citrus had just gone live and already there was an order for one box of oranges. “It was very exciting. I was like, oh my god, it works!” That was two years ago. Since then the Kemps have sold hundreds of boxes of oranges and, with the addition of lemons, limes, mandarins, grapefruit and avocados (sourced from other local growers), they’re now dispatching about 80 boxes of seasonal fruit a week to households and businesses across the country.

Online sales are projected to more than double this year and, while it remains a small part of their orcharding business, Twisted Citrus provides a much better return than sending their fruit through the pack house.

They’ve been orchardists for 12 years, ever since they bought an overgrown property outside Gisborne on the Poverty Bay flats. It came with an established kiwifruit orchard and a charming villa in which they now live with their three children, Joe, Hattie and Stella.

They knew very little about fruit growing when they took on the orchard – Bron was a nurse and Sandy had been working for a wool buyer – but they pulled it around, signed a contract with Zespri and made use of a spare two hectares by planting 1600 navel orange trees. With the benefit of hindsight they could have made more money out of mandarins but oranges seemed like a good bet at the time and, as Sandy says, “it’s always a bit speculative when you plant fruit trees”. 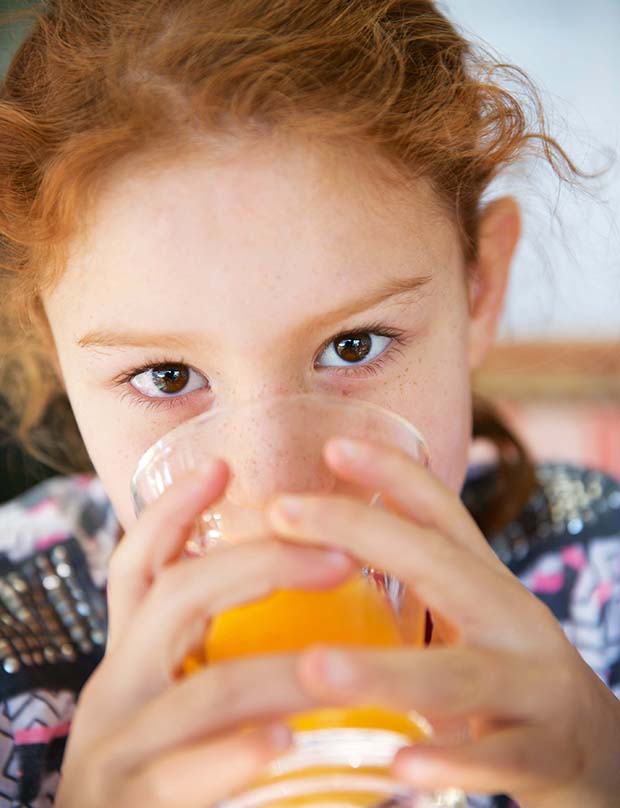 In the early days he supplemented his pack-house income by hawking bags of oranges on the side of the road and selling directly to fruit shops in Hawke’s Bay.

As volumes increased that mode of selling was no longer viable but it had been a valuable experience. Not only was it more lucrative but it had put him in touch with the end consumer and it made him and Bron realize how much people outside their region loved Gisborne oranges.

As time passed, they also saw how growers in other parts of the country were benefitting from the regional cachet of their produce. “There were apricots and cherries coming out of Otago and apples out of Blenheim and we thought, we’re in the orange capital of New Zealand here and no one’s doing online selling of citrus.” The website was the obvious place to start but it was months before they were ready to take their first order. “When we thought of the idea it was like, oh yeah, let’s sell oranges online,” recalls Bron. “I would never have realized how much work it was to set up.”

With Sandy running the orchard, much of the work fell to Bron. She enlisted a designer and photographer for the website, set up the social media platforms, organized couriers and helped design the attractive black box packaging that fits their premium brand. She says the first year was full-on as she took charge of the logistics, ensuring the fruit was picked, packed and despatched for optimal freshness, while continuing to run the home, the kids and her existing garden design work. 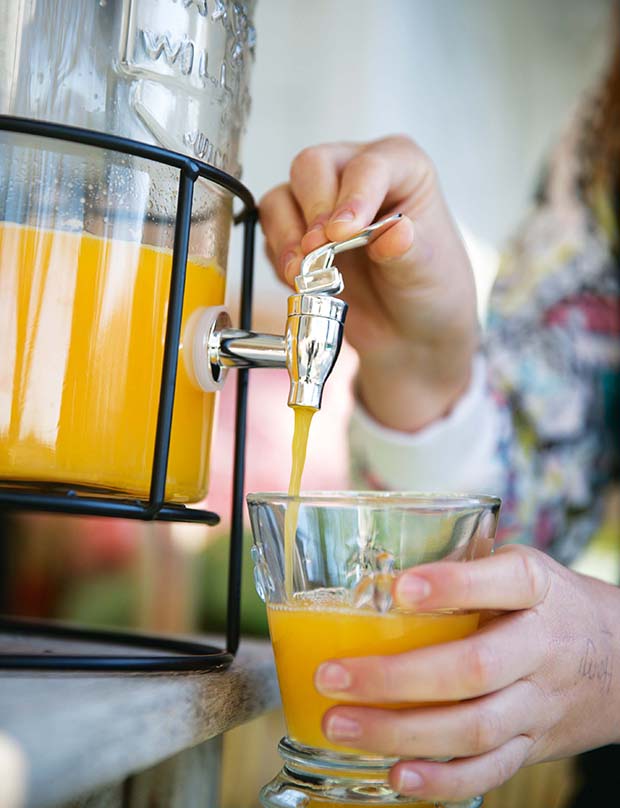 The Kemps, it has to be said, are extremely well organized. And tidy. Their office and packing shed are neat as a pin, the trees are well tended, the hedges clipped and there’s not a single leaf in the swimming pool. They are perfectionists, which makes it all the harder when things don’t go according to plan. S

quashed boxes, damaged fruit and missing orders had Bron tearing out her hair in the first year of business. “I’d get a complaint and I would just die. I was really stroppy with the couriers. It took a lot of work, making them realize we wanted our boxes turning up on time and looking good.” 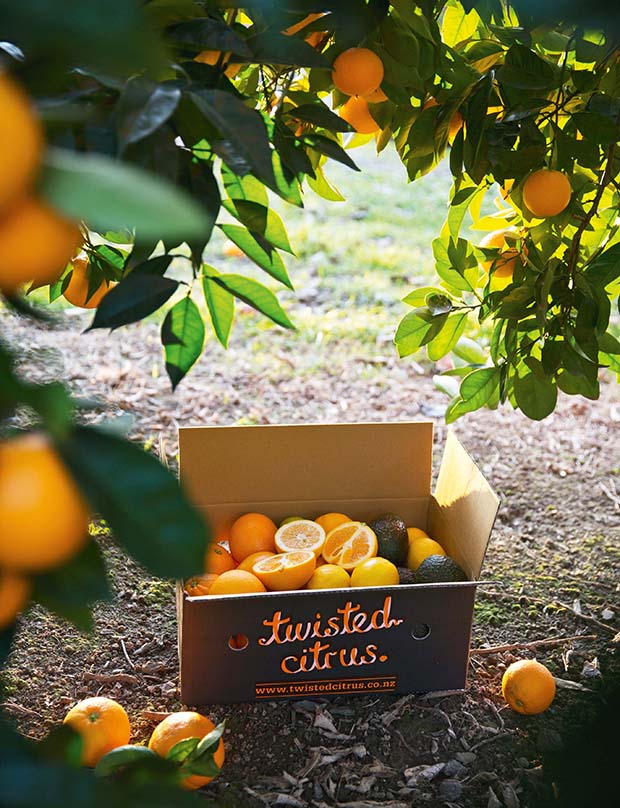 That problem’s all sorted but the cost of transport in and out of Gisborne remains a challenge. “We’re remote. It’s expensive, and we have to incorporate that price into our boxes.” So yes, it costs more but Bron says there’s no comparison when it comes to quality. Their customers are getting the best fruit off the tree and they’re willing to pay for the service.

It’s early days but the future looks bright. Sandy has plans to introduce more citrus varieties into the orchard and Bron is working on the potentially lucrative gift market.

She says starting a business from scratch has been a huge amount of work but they’re both loving the challenge of doing something that’s completely different. And they’re loving the customer feedback, which these days is almost entirely positive.

“A lady emailed me just the other day,” says Bron. “She said: ‘I’ve got one gripe. My six-year-old will now eat only your oranges. I had to buy some from the supermarket the other day and she said, I’m not eating those. I want the nice ones in the black box’.” 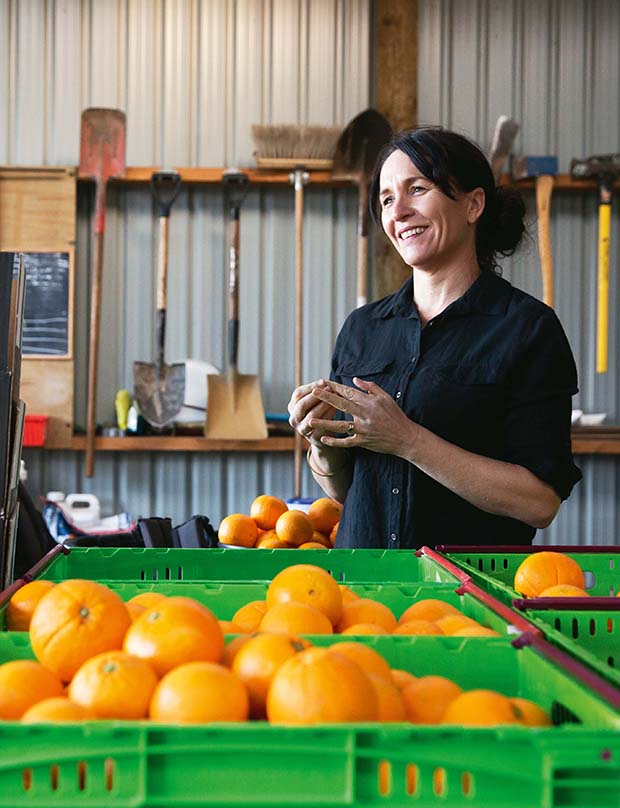 ORANGE & COCONUT SMOOTHIE
The Kemp family gets through two litres of freshly squeezed orange juice a day, neat or in smoothies like this one.
4 fresh oranges, peeled
¼ cup coconut milk
1-2 tablespoons brown sugar, to taste
2 cups ice cubes
Place all ingredients in a blender and process until smooth. Serves 4