Adventurous spirit: why this couple gave up corporate life for barrels of rum 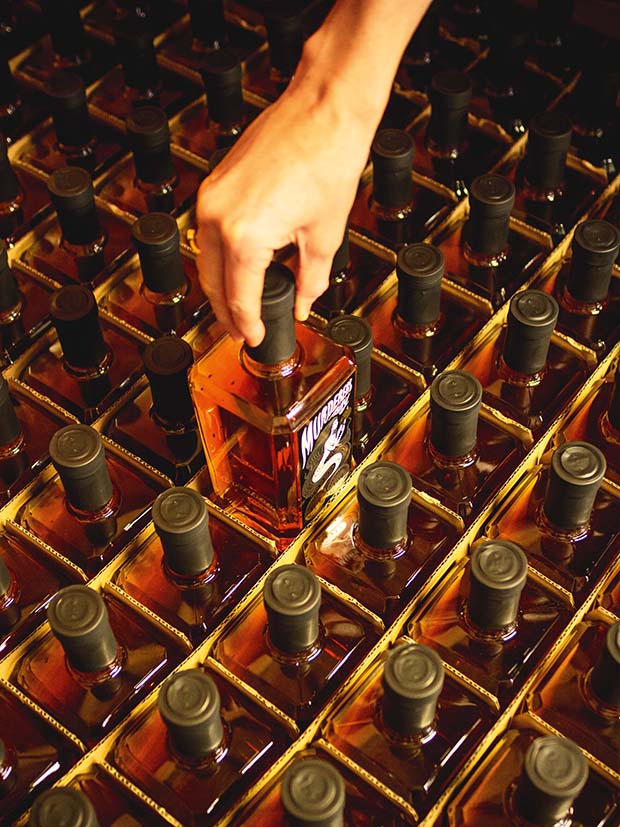 An Anglo-American couple swaps international careers for a Golden Bay distillery and its stock of barrel-aged rum.

Ben and Sarah Bonoma never thought they would own a distillery. Then again, they probably never imagined they would quit their  international careers, move to a country they knew next to nothing about, buy a house in the capital and get married on Breaker Bay beach.

“We were looking for a complete change,” says Sarah. “We’re definitely not people who will just sit back and let life pass us by.” Indeed. They share an adventurous spirit. And that – think about it – is quite the best qualification for two newbie distillers. 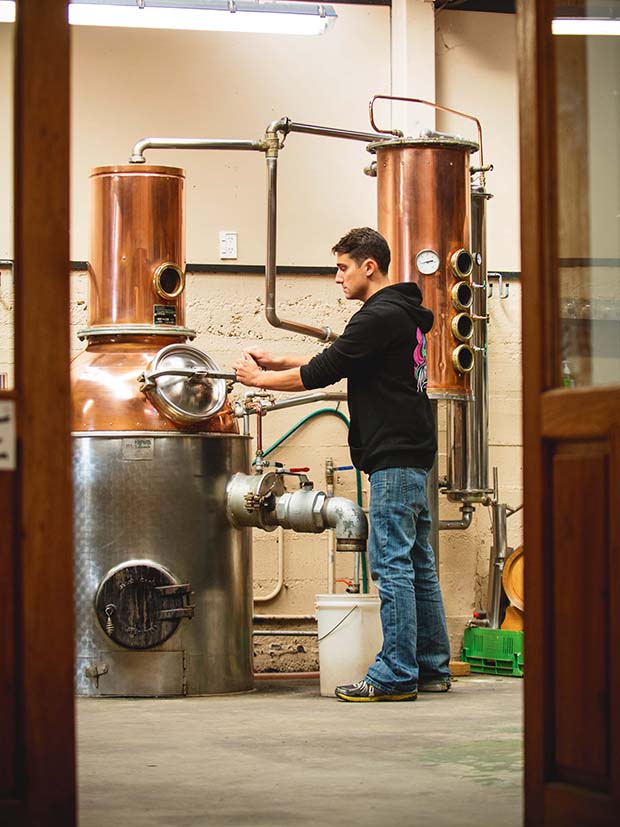 Ben Bonoma at the still that’s nicknamed JC. Engineered by Jacob Carl in Copenhagen, it’s all pipes, pots and portholes, and it gleams like a steampunk machine.

An Anglo-American couple (Ben is from Boston, Sarah from Yorkshire), they met while working on a transatlantic IT project for a multinational company. In 2013, mission completed and relationship established, they left their jobs and took a punt on New Zealand, guessing it might offer an outdoor lifestyle and a few business opportunities.

Initially Ben hoped to combine his experience in IT with an appreciation for craft beer but he changed tack when he came across a distillery for sale in Golden Bay. He knew nothing about distilling but his research into the global liquor market told him all he needed to know. “Everywhere in the world where craft beer has exploded, the craft spirit market has followed. New Zealand seemed primed for high growth.” 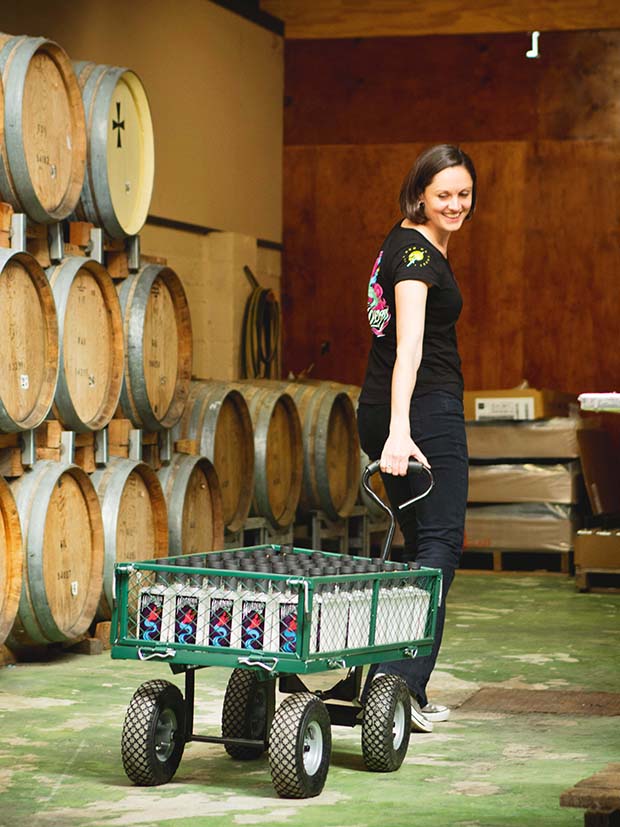 Armed with that incentive, the couple drew up a business plan, gathered a group of investors and bought the distillery plus its stock of barrel-aged rum. Bottled and re-labeled, Murderer’s Bay Rum gave the business an immediate cash flow and some welcome publicity when it topped its category in the 2016 International Rum Masters competition in London.

The 14-year-old rum with its mellow vanilla and caramel notes is best savoured neat, as you would a single malt whisky. Priced at $109 a bottle, it’s on limited release to ensure supply lasts until the new rum, made from molasses that’s fermented and double distilled on site, has done its time in the barrel. 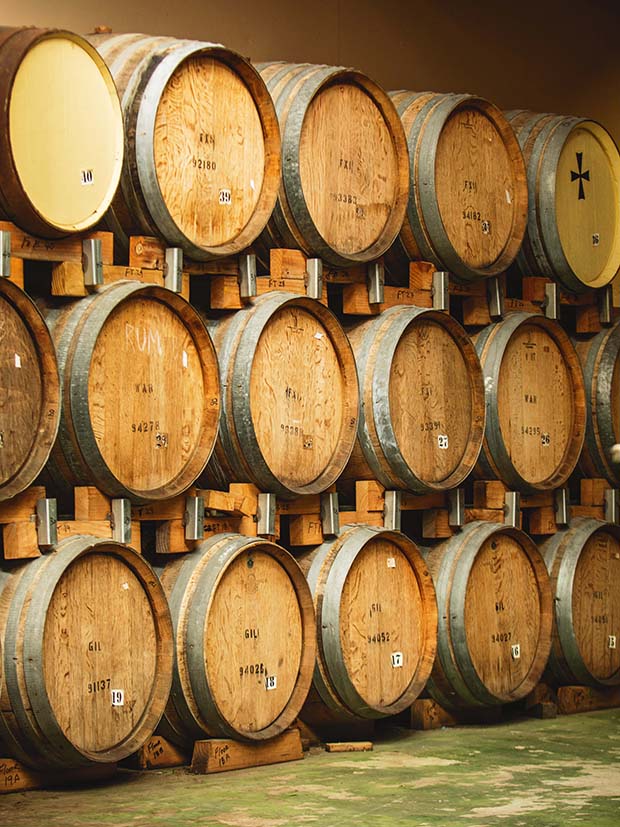 With production now in full swing, the Dancing Sands Distillery is filling up with oak barrels, some new others seasoned with Bourbon or Cognac from a previous life. Their woody scent greets visitors as they enter the distillery but it’s the gorgeous copper still that captures the eye. Engineered in Copenhagen, it’s all pipes, pots and portholes and it gleams like a steampunk machine.

It’s piloted by Sue Bensemann, one of only two women distillers in the country. Sue trained under the previous owner Terry Knight and is now developing a portfolio of spirits for Ben and Sarah. The jars of brown liquid that fill the shelves of her workroom are evidence of a work in progress. 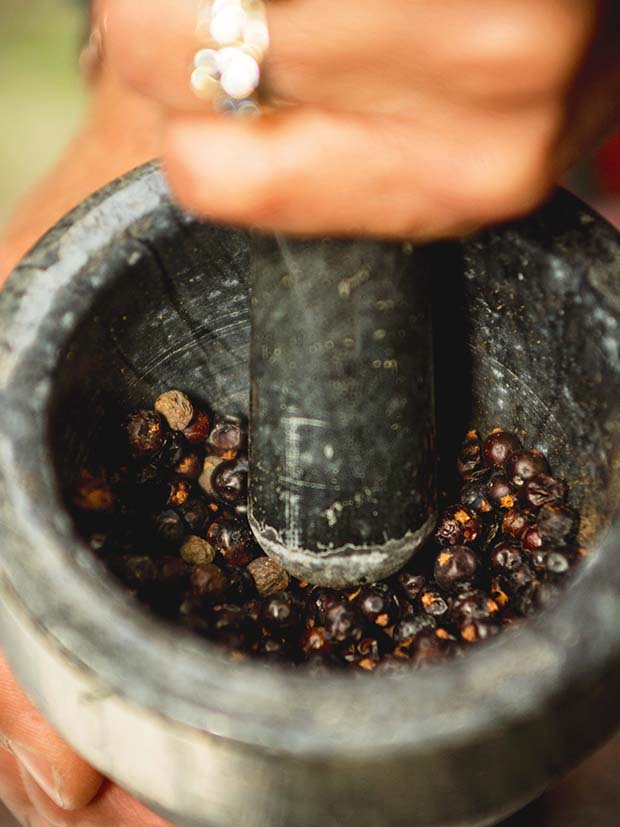 Handcrafted means hands on, from pounding the aromatics to measuring the alcohol and sticking on the labels – a job executed with precision by the distillery’s Michelle Domett.

Stuffed with cinnamon quills, vanilla pods, peppercorns, coffee beans, ginger root and other warm aromatics, the carefully labeled samples form a palette of flavours from which she will create a special spiced rum. 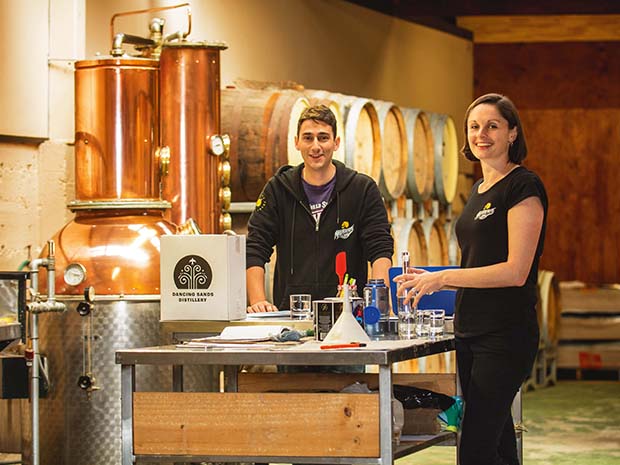 Ben and Sarah tasting and testing a new batch of gin. On its release in December, it became New Zealand’s first barrel-aged gin.

A former chef she’s enjoying the experimental approach, which is quite different from the traditional distilleries with their time-honoured recipes.

“Here we have a fresh slate and the sky’s the limit. For instance we use manuka leaf in our gin. It gives a very clean flavour – unfussy and smooth. I love it.”

The gin took months of experimentation and 44 distillations to achieve the right balance of botanicals. It was a project close to Ben’s heart, for while he says he’s no connoisseur he knows what he likes in a gin. 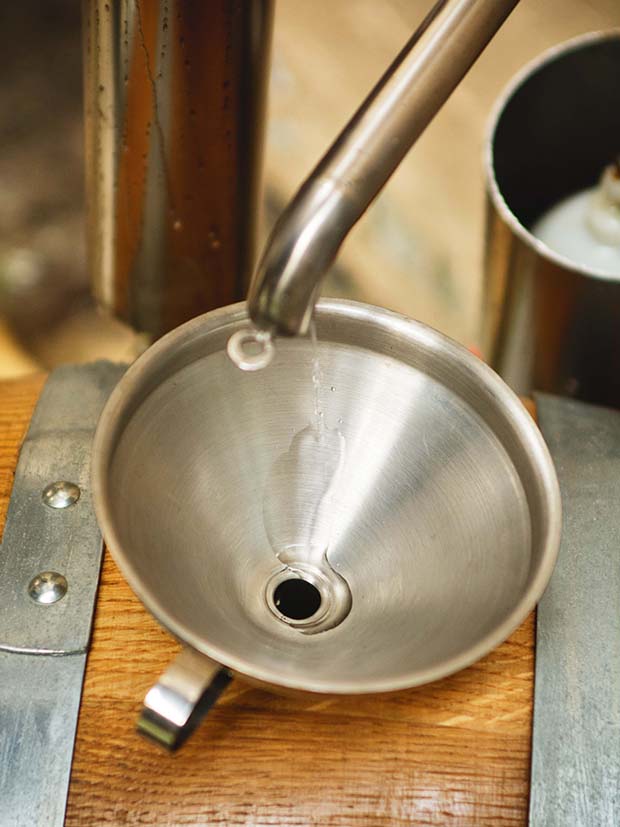 “A lot of gins today are very citrus-orientated and they’re often very punchy. We chose to move away from that and have gone for a well-balanced gin. We get the notes but not in a slap-you-across-the-face sort of way.”
More stroke than slap, it is a very smooth gin. And so is the vodka. It’s clean and crisp and it feels almost silky to the swallow. “That’s the water,” says Sarah. “The vodka took us all by surprise.”
Vodka, let’s be honest, is not savoured for its flavour. It’s rated for purity, smoothness and mouth feel and that’s why the quality of the water is essential – for all spirits, but especially for vodka. 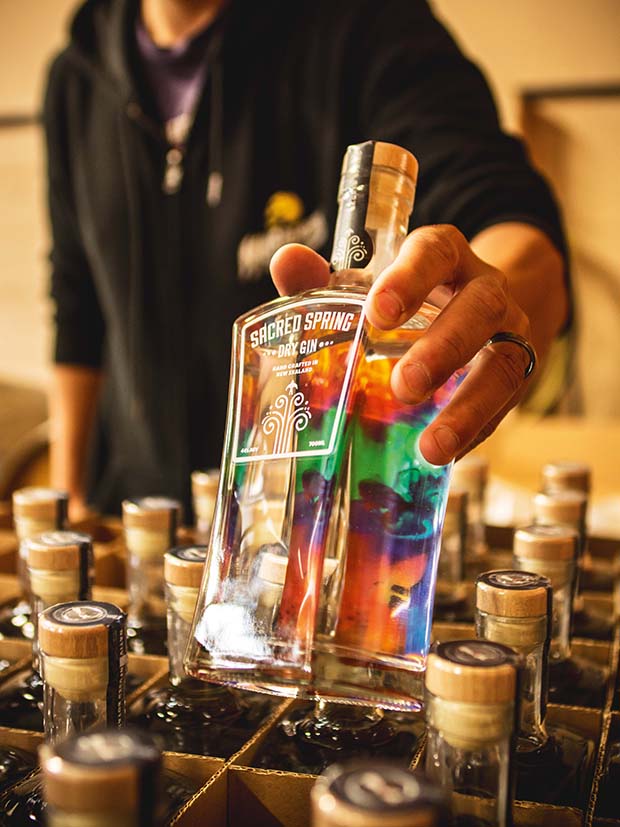 This distillery draws its water from the same source that feeds the famously clear Te Waikoropupū Springs, 10 minutes down the road. The Maori name translates as the Place of the Dancing Sands, which explains the name of the distillery.

The importance of the water is such that Ben and Sarah wouldn’t contemplate moving the distillery from Takaka, even though it means a regular commute from their base in Wellington. Ben divides his time between helping the small team in the distillery and marketing from his office at home. Sarah, who has only recently stopped working full time, manages the administration and retail sales. The travel is a challenge, especially since baby Mia arrived on the scene, but Ben says it’s a small price to pay for achieving a long-held ambition.

“I’d been looking on and off for years for something to get stuck into outside of the corporate world. I’ve always been antsy to quit my day job and go out on my own.” 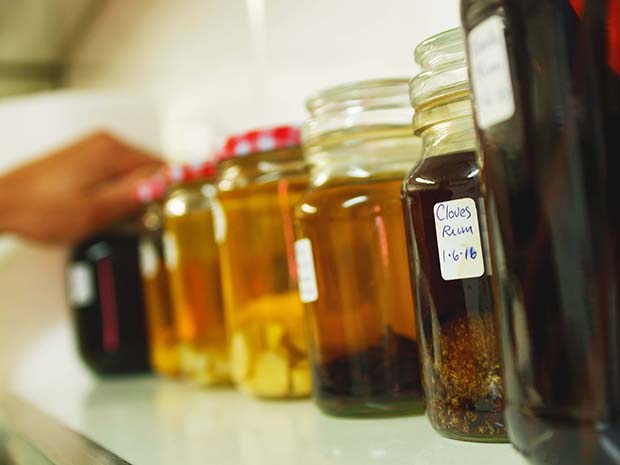 He admits to missing the support of a multiskilled corporate team but otherwise he’s enjoying the entrepreneurial life. He and Sarah are masters of their own destiny and they have big plans – domestic market first and then export. Their brand, which launched less than six months ago, is already listed in more than 75 bottle stores, bars and restaurants around the country. But Ben says he needs to move faster, especially now that the growth in craft spirits is taking off as expected.

“Life in general doesn’t move fast enough for Ben,” laughs Sarah who adds that since buying the distillery he’s the happiest she’s ever seen him. 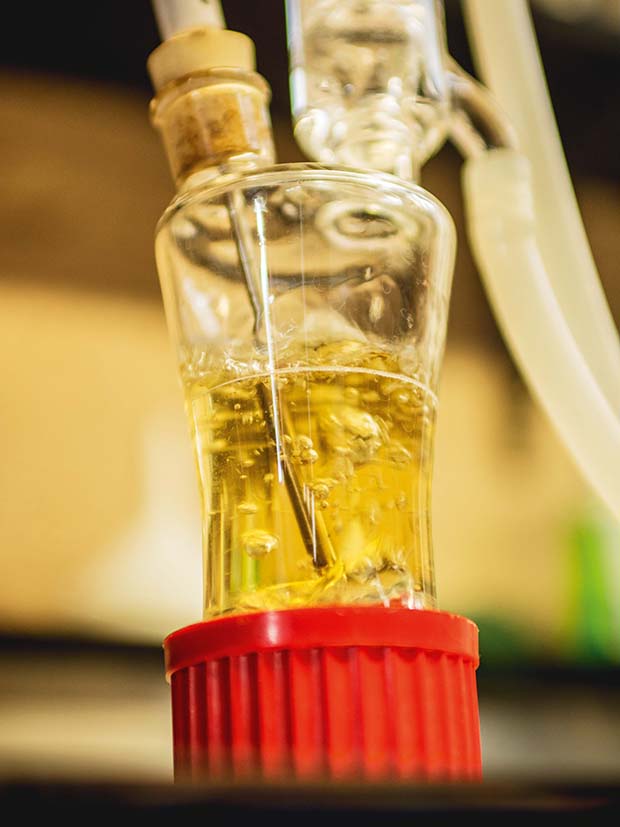 The business suits them both, and so does their life in New Zealand. A house near the beach, kayaking on their doorstep, great running tracks, mountain bike trails and easy access to the rest of the country… What more could you want? “I don’t think New Zealanders really appreciate what a fantastic set-up it is here. We’ve both lived and worked in a number of places around the world and it just doesn’t exist anywhere else.”

What I’m drinking…
Ben: “At the end of a hard day’s work at the distillery, I reach for a glass of our artisan water. It comes out of ground at a frosty 10 degrees, leaving condensation on the glass on a hot summer day. I grew up drinking city water treated with chlorine, fluoride and heaps of other chemicals and you get used to drinking it. Once you’ve had the best water on the planet, you can’t go back. The texture of the water is unmistakable – smooth and silky. You don’t think of water as having texture until it does.” 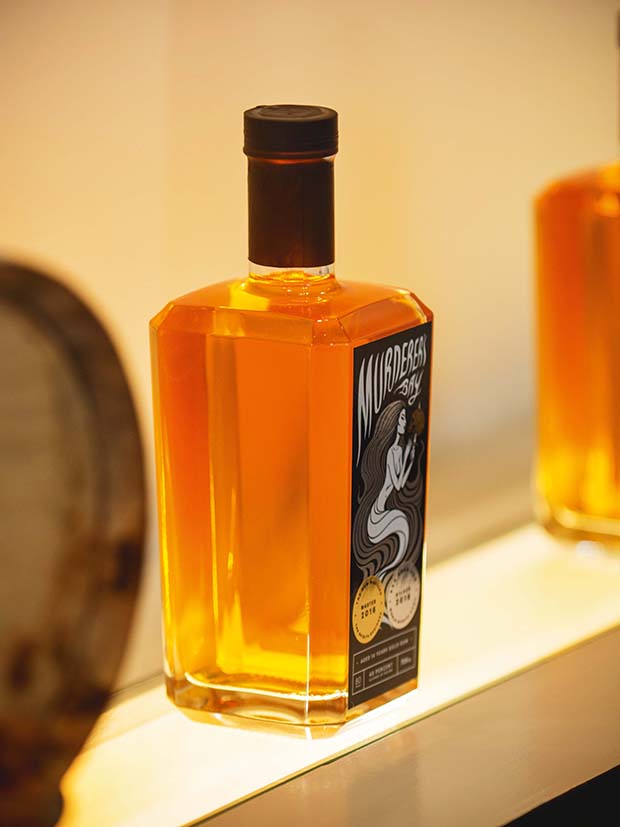