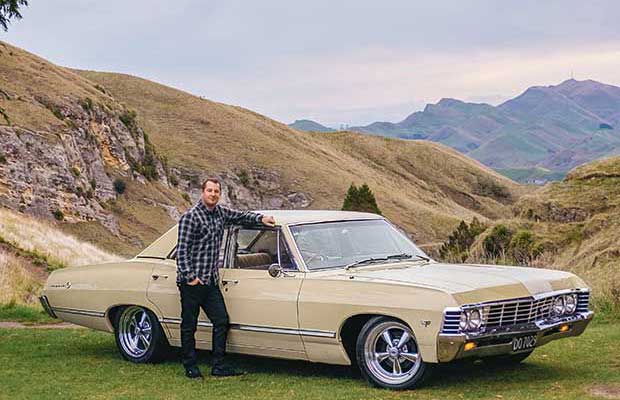 A custard-coloured Impala has had a string of owners over the decades but has now found her sweet spot – her forever home.

It was Jeremy Pruckmüller’s grandfather, a parliamentary chauffeur, who passed on the gene. “Grandad chauffeured three prime ministers as well as cabinet ministers during his career and he drove an Impala which was part of the crown fleet.

He absolutely loved cars and driving them. He owned a beautiful, big black 1938 Buick for years and he was my inspiration,” says 34-year-old Jeremy, an engineer, speedway sidecar competitor, craft-beer enthusiast and impassioned 1967 Chevrolet Impala owner.

After a lengthy stint of top-brass chauffeuring, Robert Pruckmüller became a driving instructor. Sadly, he died before his grandson took the wheel.

While he missed the chance to teach Jeremy how to drive, he has imbued him with a deep appreciation of automotive mechanics and a love of bold American cars. 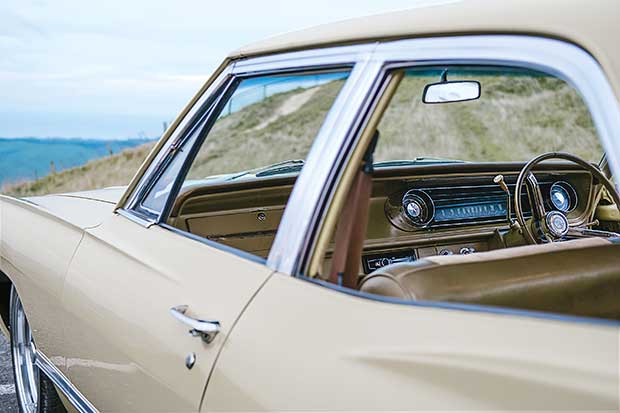 “He was a good friend to me and a very lovely man. I have great memories of traveling with my grandparents in the Buick with an old wicker picnic basket on board. We’d stop in Waipawa where my grandfather would buy speciality cheeses and then we’d drive to the Waipawa River.”

Motorbikes, cars, camshafts and engines have engaged Jeremy from the outset although some of his early acquisitions make him squirm.

“Dare I say it, but I had a Honda CRX; my silly young self was attracted by the digital dash and there were a few other dodgy choices too. I had all sorts of different cars, but I did love my 1989 Nissan Skyline and a 1979 Mazda RX-7.”

What he loves now is Bertha. “I worked on an engineering project in the States installing Kiwi-designed packaging technology in a cheese factory and I just loved the big, wide 60s-era V8 American cars we saw over there. I started saving seriously.” In his late 20s, armed with a pocketful of hard-earned cash “good for bargaining”, he headed to Auckland to chase a Trade Me listing. “Dad came with me as he’s similarly obsessed with Chevrolets and I valued his advice.”

On a suburban street Jeremy viewed a New Zealand-assembled 283 cubic-inch, V8-powered Impala and was smitten. One thing was certain – his grandfather would have sanctioned his choice.

“With a classic car you tend to get what you see. The Impala wasn’t mint but was very original. I liked the fact it had been enjoyed and loved. I’ve since worked out I’m its 20th owner. I handed over the money and headed home to Hastings. It felt wonderful. It was super comfortable – no sore bum and she didn’t miss a beat.”

But Jeremy’s heart sank when he measured the width of the Impala against the width of his garage at the time. There was 5cm to spare on either side. Six years later, powering up Te Mata Peak, his right-hand-drive sedan is rock-solid on the road, tight on the corners and a classy 51-year-old act.

“She’s no beauty pageant but she’s what I’d call honest. We’ve had one or two ups and downs – there was a bit of play in the steering wheel, so Dad and I ended up revising the whole front end – the steering box, tie rod ends, suspension and brakes.

Now she drives like a new car. There’ve been a few spots of rust, a hiccup with the electric fan and a new battery but otherwise it’s been a breeze.

“Fuel consumption is not bad and she sits comfortably at 100kph. Heater and wipers are both really effective and the two-speed powerglide automatic makes her easy to drive.” Crown fleet Impalas outside parliament in the mid 1960s. Jeremy’s late grandfather, Robert Pruckmüller, is the second chauffeur from the right.

Jeremy has had seven people in the Impala but can fit eight with four across the front seat and four in the back. Sunday drives to wineries on the coast or favourite breweries are a regular event and now there’s a very special person on board.

More stories you might like:
From Hong Kong to Waiheke: Sarah Judkins is back home among the grapevines (and arts) on Waiheke Island

“I met my wife, Cloe, a few months after I bought the Impala and my mates have given me a bit of a ribbing – ‘Got the nice car then managed to get the nice girl.’ I’m pretty low-key so when I met Cloe I just said, ‘I’ve got an old car’. On one of our first dates I turned up in the Impala. She couldn’t believe her eyes and thankfully she loves her too. We named her Bertha together and we’ve shared so many happy times since.”

The happiest being their wedding day. “Although I’m a bit embarrassed to say I was more nervous about my mate driving the Impala to the wedding, with Cloe and her nana on board, than I was about the ceremony itself.” Jeremy and his wife Cloe.

General Motors struck gold when its Chevrolet division launched a long, low piece of engineering with triple tail lights in 1958 to celebrate Chevy’s 50th year of car-making. The inaugural Impala rocketed to success claiming the spot as America’s best-selling car in the 1960s.

Over the last 60 years the sturdy machine has been constantly revised. In 2018 it maintains a commanding presence in the US marketplace and its latest model is part of Impala’s ‘10th generation.’

Bertha’s ‘fourth-generation’ specifics include a front-end facelift, enhanced Coke-bottle styling, redesigned full-coil suspension and increased safety measures – a collapsible energy-absorbing steering column, side marker lights and shoulder belts. Jeremy has given her a set of retro Cragar rims and a subwoofer in the boot.

Despite her years, Bertha showcases great style on a stretch of road near Whakatū. “I love her straight lines and the broad front grille. The gold-coloured cloth and vinyl upholstery and the paint job are both original.” 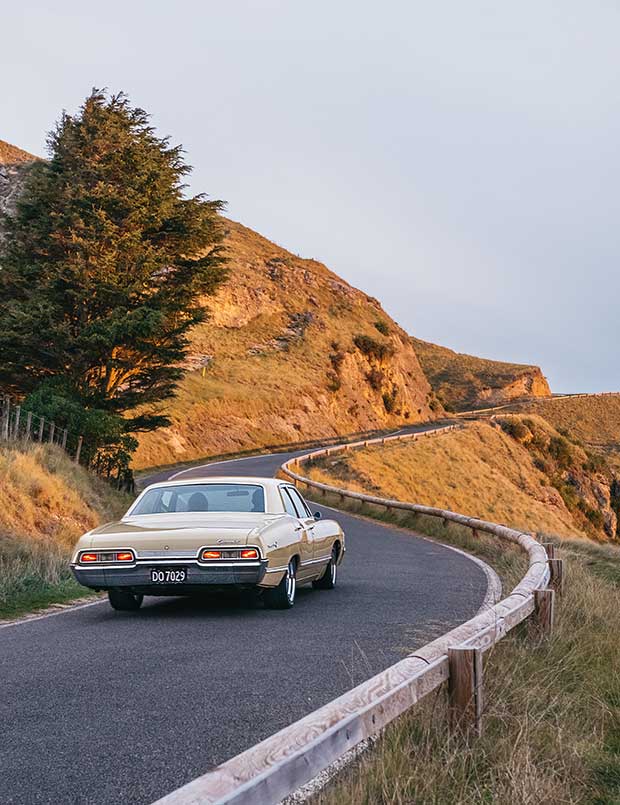 ‘I was more nervous about my mate driving the Impala to the wedding than I was about the ceremony itself’.

She is housed in the garage alongside Jeremy’s daily drive – a recently purchased 1988 Chevrolet Silverado, Cloe’s 2014 Hyundai Santa Fe, two race bikes and a Kawasaki ZXR 1000 sidecar he regularly races with his father.

Soon after Jeremy bought the Impala he found an old-style coloured Polaroid in its glove box. It’s a well-thumbed photo which asks more than it says. “I’d say it’s been floating around in there for maybe 50 years. I suspect each owner has been like me, has seen it and felt it should stay there.”

It shows the car parked in a tree-lined driveway. There is a woman sitting on her own in the car in the front passenger seat.

She is beaming at the camera.

Who she is and where the photo was taken remains a mystery. But beaming smiles from the two people who now sit on the front bench seat of the Impala are an enduring theme.