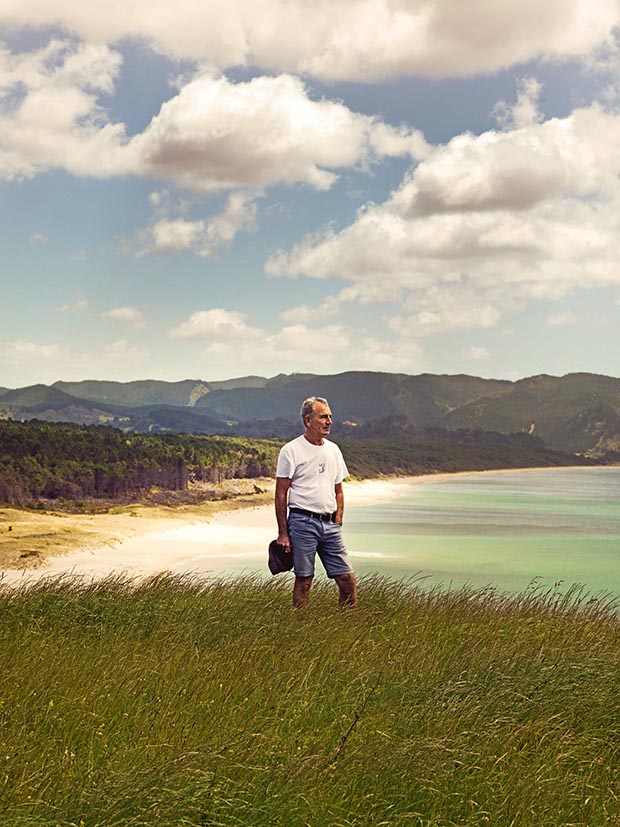 Chris Parry, drummer for the iconic 1960s band Fourmyula and manager of British bands the Jam and the Cure, left New Zealand 50 years ago expecting never to return. But that was until he found a soul-soaring piece of turf he now calls home.

The year 1967 was an eventful one in New Zealand. A new currency arrived; pub-goers cheered the end of the six o’clock swill; and school children celebrated the end of the compulsory school milk scheme. The airwaves were filled with the Beatles, the Beach Boys and the Bee Gees. In Upper Hutt a group of lanky Heretaunga College lads were also making music. They had bowl haircuts, tight trousers with flared cuffs and high-heeled boots. They practised in the school’s music room but dreamed of bigger things. When they advertised for a new drummer Chris Parry, a student at nearby Silverstream College, auditioned. Slender as a drumstick, the ninth of 11 children, he learned his skills tapping knives on the kitchen bench while drying an interminable number of dishes. Later he bought a set of Beverley drums and practised in a shed behind his parents’ home. When he saw the Heretaunga lads’ advertisement for a drummer for their band the Sine Waves, he applied. Two drummers auditioned. “I got the job because I had a truck driver’s licence.” The band was re-named Fourmyula. At its peak Chris Parry and his band Fourmyula had the world at their feet, but today Chris prefers a place on the Coromandel that reminds him of his childhood holidays when he camped in farmers’ fields and fetched water in a bucket.

Chris Parry didn’t know it then but he was on the cusp of a career that would see his band rocket to the top of the New Zealand charts within a year; record at the famous EMI Abbey Road Studios in London while the Beatles knocked out Oh, Darling next door; sign and manage bands like the Jam and the Cure; and launch a London radio station. It was a trajectory that was to be paved with big names and expense accounts, seduction and rejection, long lunches and pads in London and Majorca. So what’s he doing sitting on a pocket-sized patch of sand on a remote strip of the Coromandel Peninsula feeling like he’s home? 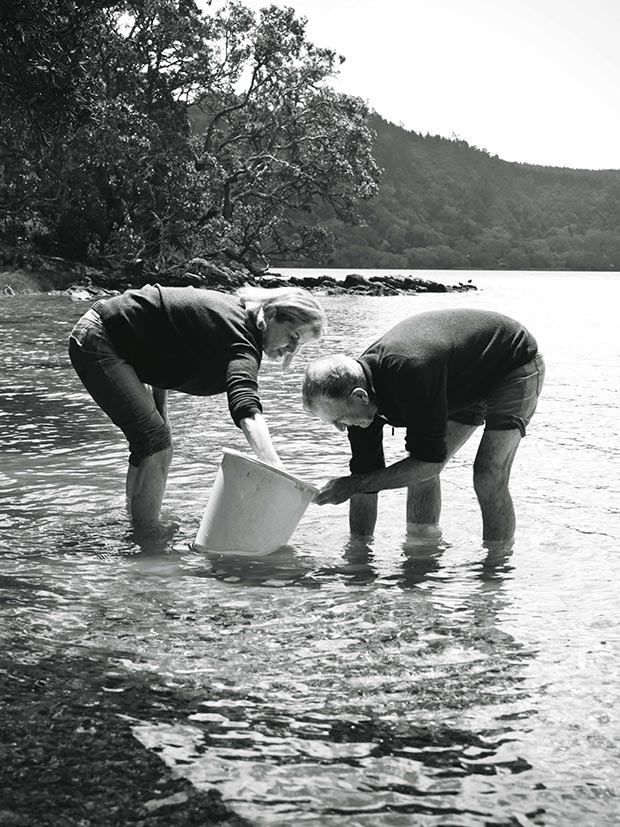 “There comes a point,” he says, watching divers board a boat with heavy sacks of crayfish, “when you look back and think ‘those times were good when I was in it’. But the things I hold dear now are not the same as then.” The things he holds dear now begin mid-morning (“I’ve only ever seen dawn when I haven’t been to sleep”) with coffee with his partner Susan Verkerk. He’ll check the possum traps on the 52-hectare property, fish or gather cockles for a late lunch, which he will cook while listening to his current favourite American indie rock band, the National, followed by a rest, a swim with a barbecue and pinot noir at sunset. Over summer, it’s a laidback, family-centred lifestyle punctuated by cricket games at low tide on the Wharekawa Estuary, talent contests in the barn, and music. One of his sons is a talented bass guitarist; a grandson (4) already taps out beats with sticks. “I think he shows promise,” says Chris. In the 1960s, the music business was cut throat, filled with Machiavellian charmers and snake-oil salesmen. Many young groups had their hopes dashed by fickle fans, bad deals and changing fashions. Fourmyula was lucky. They had a sweet sharp run, winning the Battle of the Bands and racing up the charts with hits like Come With Me, (kept from number one by the Beatles’ Hey Jude). Their iconic Nature, written by lead guitarist Wayne Mason and later covered by The Mutton Birds, is arguably New Zealand’s favourite song ever.

The band made two trips to England, recording and playing gigs. When they split up in 1971, they were ready to go their separate ways. “Wayne was heading home to New Zealand to get married. Everyone had their plans.” After savouring the lights of London, Chris found the return to New Zealand a challenge. “I drove into Wellington at dawn. The rolled-up morning papers were blowing down the road like tumbleweed. I thought, ‘I’m leaving for good.’” Four years after his return to London, armed with a freshly acquired diploma in marketing and advertising and a Scottish wife (“we were way too young”), he started looking for jobs. The record label Polydor was looking for a talent scout. It was the mid-1970s – the beginning of the punk era. Chris got a tip-off from a contact suggesting he check out this “weird group of kids playing weird music which had a lot of people following them”. The group was the Sex Pistols. Chris plied them with promises, but didn’t win them over. What he did get was the Jam, a south-east London group fronted by the stylish Paul Weller. 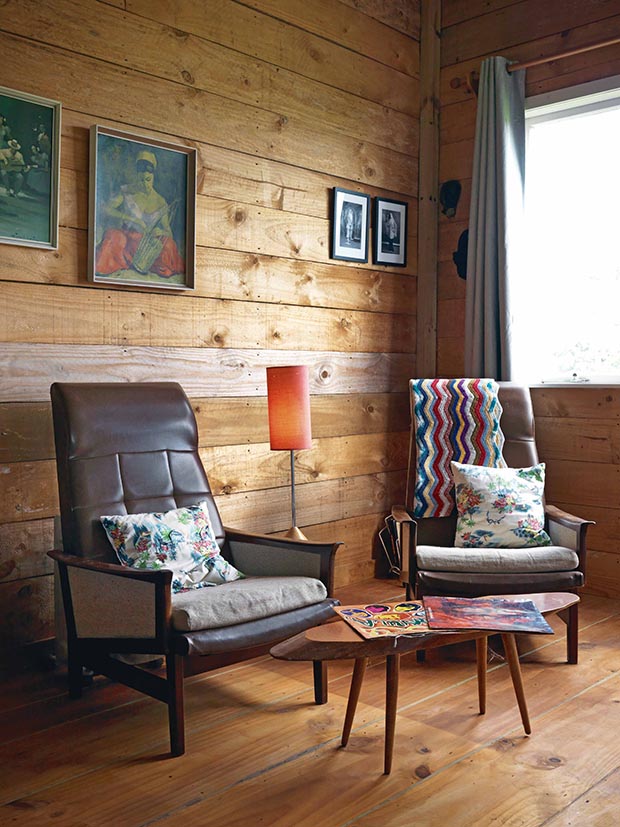 In 1978 came a second triumph. The Cure, an English rock band fronted by legendary Robert Smith, cut a demo tape that landed on Chris’ desk. By this stage, in a deal with Polydor, he had formed his own label Fiction Records that gave him the cash and the licence to sign the next big thing. “I looked a bit like Cat Stevens at the time – the hair, leather jacket and boots. I was different [from the Cure] but I was the first believable record company guy they had come across.” The group, described by music mag NME as “the most successful alternative band that ever shuffled disconsolately about the earth”, produced their first album Three Imaginary Boys with Fiction in 1978, followed by the single Boys Don’t Cry. Over the next decade Chris brought them to New Zealand twice. He describes it as a dream run – “a meeting of needs and minds”. The Cure’s success, he says, was all about the songs. “There has to be a powerful song.” He puts his own success down to being one step ahead of the game. “It’s like fashion. If you watch what people are wearing, you know what’s coming next.” Applying that to his next move in 1992 he launched Xfm, a radio station in the tight and prized London market, that caught the wave of alternative rock. 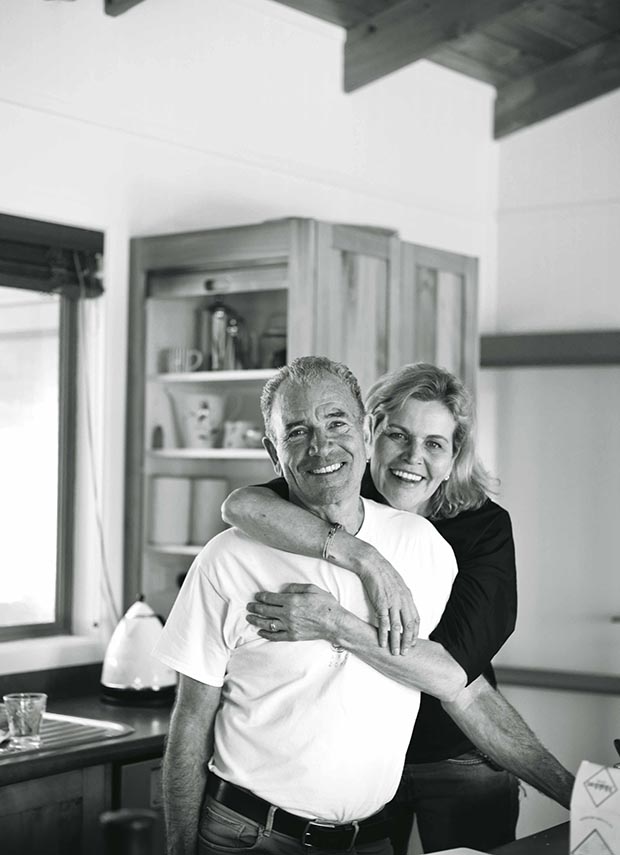 Chris and partner Susan Verkerk say they have made the commitment to call New Zealand home.

Against this backdrop, Chris’ private life was also changing. He had two more children to then partner Elaine; he sailed a yacht from England to New Zealand, surviving Cyclone Bola. He remarried. And in 1996 bought a property on the Coromandel Peninsula. At 67 he says he’s made the commitment. “I’m a New Zealand citizen now.” A year ago he met Susan and they discovered they were likeminded souls. “The day after we met we were shopping at Briscoes together,” she says. The property is five kilometres as the seagull flies north of Onemana. It’s a farm with young stock, part of a nearby larger dairy farm with 280 milking cows that Chris also owns. It was developed in the late 1940s by Doug Norman, who rowed across the Wharekawa Estuary to deliver the cream. There is a significant pa site on the headland, loved by the late historian Michael King who lived across the water. Established and newly planted pohutukawa line the shores of the estuary and the ocean. There is a good fishing spot named Nosy Parker Rock, a tiny ocean beach called Maomao Cove, and dirt tracks and drop-dead stunning views from every angle.

The original red corrugated iron farm buildings have been refurbished; the flash cars of the 1970s and 1980s swapped for an off-road Kawasaki Mule; and the sharp suits replaced by shorts, T-shirts and a sturdy pair of RM Williams boots. Chris refers to himself as a custodian of the land rather than a conservationist. “If I can keep the possum and wattle down, I’ll be happy man.” He still has a flat in London and a house in Majorca but this is where he now calls home. Fifty years ago, when he vowed he was leaving for good, he says an old guy at a service station in Upper Hutt said to him, “You’ll be back, mate. You were born under the shadow of Kapiti.” It appears the old man was right. 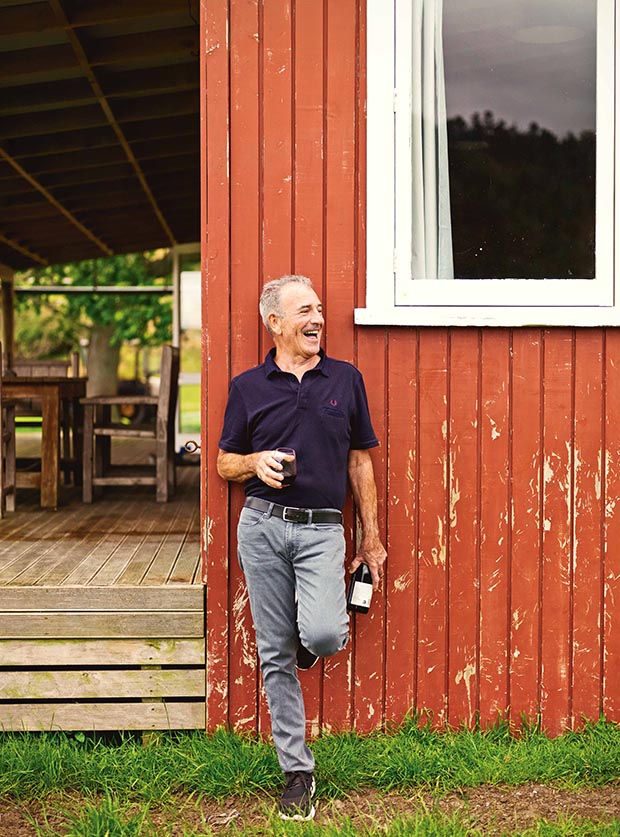 ● One of Fourmyula’s best-loved songs – regarded as New Zealand’s alternative anthem – Nature was never played live at a gig because its creators didn’t believe it would work.

● Fourmyula song writer Wayne Mason wrote Nature in 1969 when he was 19, sitting on his mother’s porch on a sunny day, listening to the sound of the bees.

Up in a tree, a bird sings so sweetly
Nature’s own voice – I hear
Rustling whistling leaves turning breeze to speech
Call to me now – ease my mind
I’ll turn to something new
My mind’s laid with dew
Nature – enter me

● The song, part of the album Creation, has an unconventional arrangement. Someone plays a suitcase; another shakes a full matchbox; there is an auto-harp; a wooden organ lid serves as a kick drum and the sole of a leather shoe is the hi-hat (cymbals). It was felt the sound wasn’t suited to amplification at a live gig. “It was a bookend to what we did,” says Chris. “We thought it was funny and light. You just roll with it.”

● Nature reached number one in the New Zealand charts in 1970 and the same year won the APRA Silver Scroll for song writing. The Mutton Birds recorded a more rock-focused cover in 1992. In 2001, it was voted the top song in APRA New Zealand’s top 100 songs of all time. 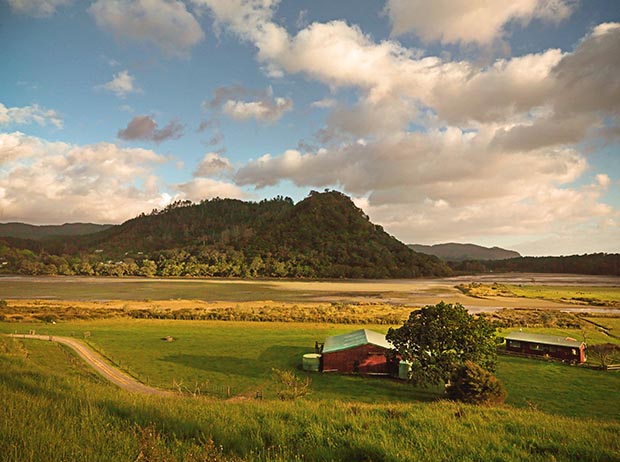 Pinot noir, sweet pasture for the stock and the sounds of silence have replaced penthouse suites and limousines.

Sunday, 20 April 1969 is stored in Chris Parry’s memory bank. Fourmyula band members – all aged under 20 – were in London to do a recording session at EMI’s legendary Abbey Road studios. It had been a long day. The session lasted 16 hours. The band was to record three tracks: Lady Scorpio, an up-tempo version of Home and an instrumental version of Orphan. They returned from a break and glanced into an adjoining studio. A mop-topped lad was hunched over a piano. “Excuse me,” said a voice from behind. It was Ringo, followed by George, John and Yoko (wearing matching blue jeans and black jerseys), Paul’s wife Linda and American blues organist Billy Preston, who was working with the Beatles. “We understand they were a bit miffed because we’d taken their usual recording room – their turf,” says Chris. Chris says he was too shy to introduce himself to his idols but Wayne Mason was determined to make himself known. At one point, he said, “I’m going in.” George Harrison said to him, ‘Oh, New Zealand… that’s sheep’.”