Lessons from a plantaholic: Why Lynda Hallinan finds more peace than profit at her Hunua Ranges block Lynda Hallinan is celebrating the joy she finds on her block, even when she’s weeding.

She calls it “probably the most uneconomic block in the world”. There are six pet sheep, a pig, and five rescue cows – Rusty, Dusty, Fantail, Cupcake, and Sebastian. She’s locked in a losing battle against garden-raiding rabbits, pukeko, and free-range chooks.

So Lynda Hallinan bought a second 3ha block down the road and has gone to war with rabbits there too. They appear determined to destroy her new native plantings in a wetland area on the banks of Hunua’s Wairoa River.

“At the moment, we’re renovating the little historic cottage on it, so we’ve turned our back a bit on the farm. I suppose my attitude to gardening and farming are fairly similar,” she laughs. “We don’t do it for profit!” Only a gardener could describe their children as trees. Lynda says younger son Lachlan (right) is a sapling silver birch or perhaps a juvenile rangiora, Brachyglottis repanda. His older brother Lucas is an Irish yew.

Lynda spent the first 10 years on her family’s block 45 minutes south of Auckland creating a complex, enormous garden. It started with fancy, frilly beds around a carpet-like lawn where she married her husband Jason. It expanded down a hill to completely cover what had been a dressage arena. She put swathes of flowers and shrubs around an old stable block, then planted a big orchard.

“I started the garden gung-ho. But the funny thing about a country garden – you spend the first five years developing it and the next five years pulling it apart. You find some things grow better than others, some hedges get too tall, some shelterbelts get out of control, and you’ve got to limb them up to let in some light.”

Lynda has been a self-confessed plantaholic for more than half her life. She transformed the lawn of her former city home into a fence-to-fence self-sufficient oasis with no grass to be seen back when she was single. She bartered and traded her crops in a year-long experiment to see if she could live on a $10 weekly grocery budget.

Over the years, she’s had the privilege of spending hours learning the secrets of the creators of NZ’s most fantastic gardens. And yet, she says she still made the most common error she sees everywhere she goes. Lynda spent “a fairly significant amount” to buy and ship the hornbeam trees (Carpinus betulus) for this hedge around the arena, with no guarantee they’d do well in her climate. Fortunately, they’ve triumphed.

“We think nature is static, and we have some control over it. Things are going to change, plants are going to grow and when they grow, they create new issues: too much shade, they hog the light, they take all the water.”

And there’s the climate, which even in her 10 years on a block has changed markedly. “Whether you believe in climate change or not, the climate is definitely changing. We’re now getting these extreme summers of hot, dry weather with not much water, or really wet winters, so it’s floods or drought – there’s a change.”

Foggydale Farm is just 2km west of one of the enormous dams that supplies Auckland’s water, but like the city, Lynda can’t rely on replenishing rains. That’s led her to do things in her garden she once vowed she’d never do.

“I’m planting low maintenance areas; I’ve put in a lot of flax and cabbage trees. Ten years ago, if you said to me I’d buy 300 cabbage trees to plant I’d have said don’t be daft. But I’ve got a lot more respect for native plants than ever before – I’m a real latecomer to that point of view. Now I really enjoy collecting kowhai seeds and growing karaka trees, doing things like that.” Lynda took a break after writing her new book, The Joy of Gardening, mostly due to the 2021 Auckland lockdown and the uncertainty Covid-19 posed for many of the gardening festivals she usually attends.

On the day we talk to her, she’s sitting under an ornamental pear (Pyrus calleryana Aristocrat), hand-weeding grass to create a new flower garden. She avoids chemicals as much as possible.

“I don’t know if it’s a natural process, but I feel you get more like a hippy as you get older, you become a bit kinder, more gentle on the environment. I’ve never used pesticides or fungicides – I never wanted to use herbicides, but I’m a bit lazy. Now I actively avoid them. I really try not to do anything harmful to the planet.” Potatoes are her favourite crop.

She still doesn’t make compost – “I just dig things over, pile them up, the chickens dig them over, and I leave it all to rot.”

She’s also learned she doesn’t need to plant everything, although her pared-back spring sowing was still impressive.

“I had 12 seed trays jam-packed with different things, but it’s only because it was lockdown and I had the time. I grow a much smaller range of vegetables these days – I’ve always experimented with growing unusual things, but now I grow the things we like to eat, like beans and tomatoes, as opposed to trying to grow everything. Having said that, I’ve already planted 9kg of seed potatoes and I’ve got 9kg to go. That’s fun though!”

Her sons Lucas and Lachlan agree. While Lynda is weeding, they’ve dug a little pond on the edge of the nearby Wairoa River and are dive-bombing into it.

“When I first had Lucas, I thought he’d be my little right-hand man and do lots of gardening with me. And he does, but he has an attention span of 15 minutes. I remember, when we were kids, our parents never actively played with us or built huts, they let us go to it, and I think that’s an important thing for kids in the country. They’re great experiences, and I’m lucky because I don’t have to be actively involved with (what they’re doing) – I can garden, just hang outside nearby, and be with nature.”

1. Don’t go overboard. “Everyone usually grows way too much. It’s a real problem on a block because you have more space (than city gardeners) and you can grow ridiculous amounts of everything. Then, so it doesn’t go to waste, you have to preserve all the surplus and you create work for no reason at all.”

For Lynda, that has meant many mad summer days preserving, roping in family and friends to help. “Jason eats maybe 20% of it, and the rest I give away – it’s kind of madness. It would be better to chill out. It’s nice to share, but it would be better to grow a few courgettes rather than dealing with hundreds of them… I’m learning.”

2. Why she’s moved from perfection to serenity. Lynda has visited “the best, most perfect, pretty gardens in New Zealand”. She aimed high when she opened her farm garden to the public for charity events but admits it took a huge amount of behind-the-scenes work from friends and family to make it look spectacular. Not so much these days. 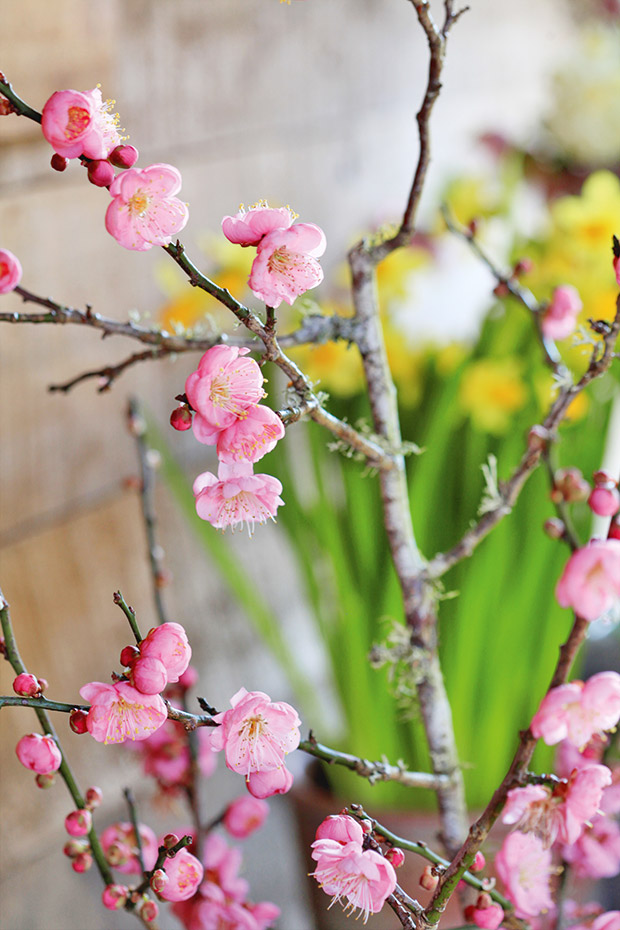 “I’ve been to lots of gardens that are well-loved by their owners but aren’t necessarily photogenic, and last year my veggie garden started looking like that. I’ve always made sure things looked nice, but I realise now it doesn’t matter at all.

“When I tell people I’m letting things go, and I don’t mind a garden full of weeds so much, they don’t believe me. But as I get older, I’ve realised there’s more to life than worrying about what things look like.”

3. Plant more of less. A few years ago, Lynda challenged herself to photograph something different flowering in her garden every day and she did it for months, so vast were the options. Things are different today.

“I plant fewer things than I’ve ever done but more of the same, because once I like something, I plant more: more hydrangeas, more hellebores, more easy things that give you seasonal colour, especially on the fringes like early winter or early spring rather than the obvious stuff.”

More stories you might like:
A Lady Butcher: A nose-to-tail charcutier emphasizes the flavour of free-range, locally raised animals

4. Experiment. She may be more pragmatic these days, but she still loves a good experiment. When she first moved to Hunua, she spent a fairly significant amount shipping in several pallets of hornbeam trees (Carpinus betulus) from a South Island nursery.

“The first year they were in, our cows got in and ate all the new growth off them, but it’s a fabulous thick hedge now. People told me that hornbeams wouldn’t do well in Auckland, but they’ve been fantastic, probably because they’re in a sheltered dip. (The hedge) does need pruning twice a year, but now it’s a wonderful green wall all the way around the arena garden. Because it’s not planted often (in Auckland), people don’t recognise it when they visit. It’s so much better than something like griselinia, which tends to rot if it gets too wet.”

This winter, the chicken run was swathed in pink flowering blossoms from another Lynda experiment.

“There was one blossom tree at the cottage and it took me a while to figure out what it was. It turned out to be a Japanese flowering apricot (Prunus mume Peggy Clarke). They start blossoming in the middle of winter and they’re just magic. They’re hard to find but worth seeking out because they’re so wonderful, so pretty, and they’ll only get better. If I can stop the rabbits trying to ringbark them in spring.”

WHY GARDENING IS SO IMPORTANT

Even when she was a magazine editor, Lynda tried to do most of her writing at night so she could be outside in her garden as much as possible.

“I could be writing right now, but I’d rather be outside weeding. I’m a much nicer person when I’m outside in the garden. I can be kind of abrasive – it’s true! – and I’d be an awful person if I did a corporate job. [Gardening] literally keeps me grounded. Lachlan (8) and Lucas (10) have a different definition of ‘gardening’ to their plantaholic mother.

“During the first 2020 lockdown, I was quite anxious because I was worried lots of people would die. This time it felt like endless days. I know there’s an economic hit for so many people, and I’ve had to cancel a few (work) events. But I wouldn’t be surprised if some blokes – like my workaholic husband – end up living longer because they’ve had to stop working for a few weeks.

“It’s a freaky time, there’s a weirdness to it all. Our kids don’t understand that we’ve lived our lives until now without lockdowns – to them, it’s ‘normal’.

“I definitely think it must be easier to be in the country during these times.” In Lynda Hallinan’s book, The Joy of Gardening, the gardening guru focuses on the gentle delights that bring joy to our backyards, from birdsong to seasonal beauty. She’s looking at the things that make our hearts sing: slowing down, letting go, working in harmony with nature, and cherishing the accidental pleasures, from self-sown seedlings to bumblebees sleeping in dahlia blooms.