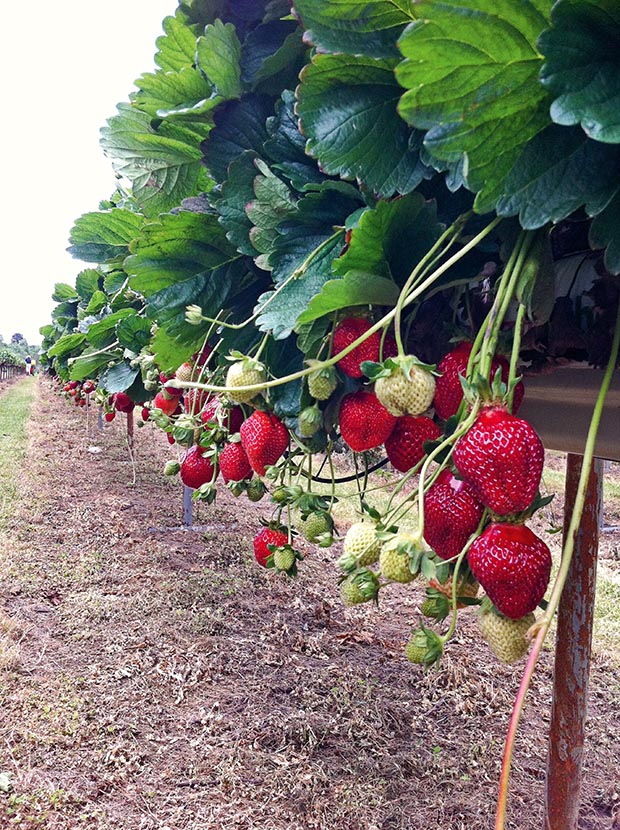 In only a few years, a Wairarapa couple have turned a derelict wee barn and a rundown lifestyle block into a successful, award-winning fruit and berry business.

The Wee Red Barn is certainly not big – you could easily miss it as you head north on SH2 from Masterton. However, those that do stop are spoilt for choice when they walk inside, especially if they are lovers of fruit and berries. Alan and Dot Bissett initially specialised in growing strawberries when they first set up the business in 2007, and it wasn’t long before the Wee Red Barn was known as the place to visit if you wanted some particularly good fruit. They describe themselves as a wee bit of Scottish (Alan) and a wee bit of Kiwi (Dot) who literally met over a strawberry patch. Alan had been managing a soft fruit farm in Scotland for a number of years and Dot was on her OE when she began to work on the same property. After marrying and deciding they would like an adventure, they found a run-down property on Trade Me and bought it before moving to New Zealand in 2007.

Since then a derelict barn has been transformed into the Wee Red Barn and their work on the property itself has turned it into a highly productive business that is renowned for the quality of its produce. Enormous steps have been taken since to utilise their block to its fullest potential and ensure nothing is wasted. 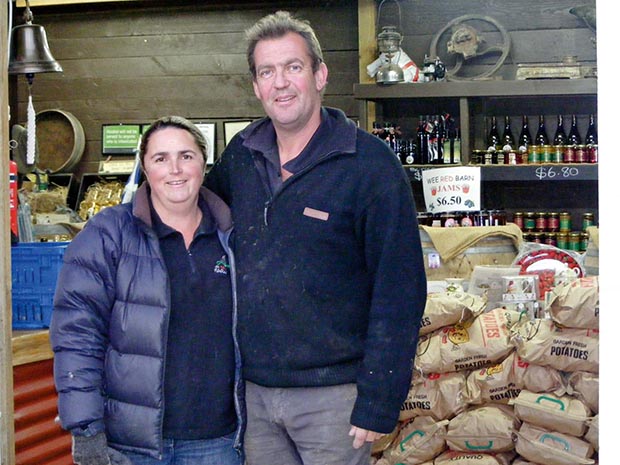 One of the unique aspects is the triple-tiered table top system they have installed to ensure they utilise and get optimum strawberry production from the land that they have. When Dot and Alan were offered the opportunity to trial the new system by its manufacturers (UK Company Haygrove) they saw the benefits and accepted. The couple were so impressed by the results they bought it, making them currently the first and only strawberry growers in the country using it.

Alan admits the system doesn’t suit all varieties and some – especially the bushier varieties – are better suited to a double tier system, but for them it is working well.

“It allows us to put in three times more plants per square metre so you’re utilising your ground. Instead of having five acres of strawberries in the field we can knock that back to two acres. 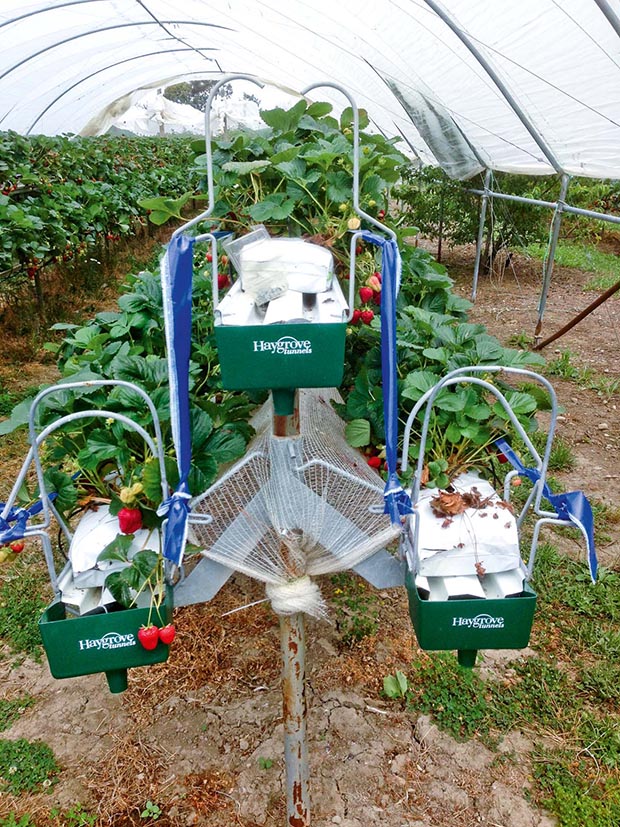 “Using this method we also find we keep staff longer because they are not breaking their backs picking as they are now picking at waist level. That’s good because if they are working for you longer they become quicker which reduces your picking costs. So if you’re paying per hour while the picking rate goes up your kilo price comes down. For example, our average used to be approximately $1.20 per kilo in the field. Now we’re down to about 45-50 cents a kilo picking from the table, so our picking costs have halved.”

Alan says using the system has also eliminated a lot of the work that growing strawberries in the field entailed such as ploughing and re-laying the field, and there is less use of chemicals. “We‘re working on eight acres (approximately 3.5ha) where we would normally plant 54,000 plants per hectare. Now with this system we are planting the equivalent of 117,000 plants per hectare.”

On Alan and Dot’s property the triple tier system is in 9m lengths although the original length is 75 metres. “We’ve got it at that length so it is not too long for people to walk along. We also use trolleys so nobody is carrying fruit anymore. By picking from the plant straight into the punnet we are also reducing all previous damage and handling costs.” 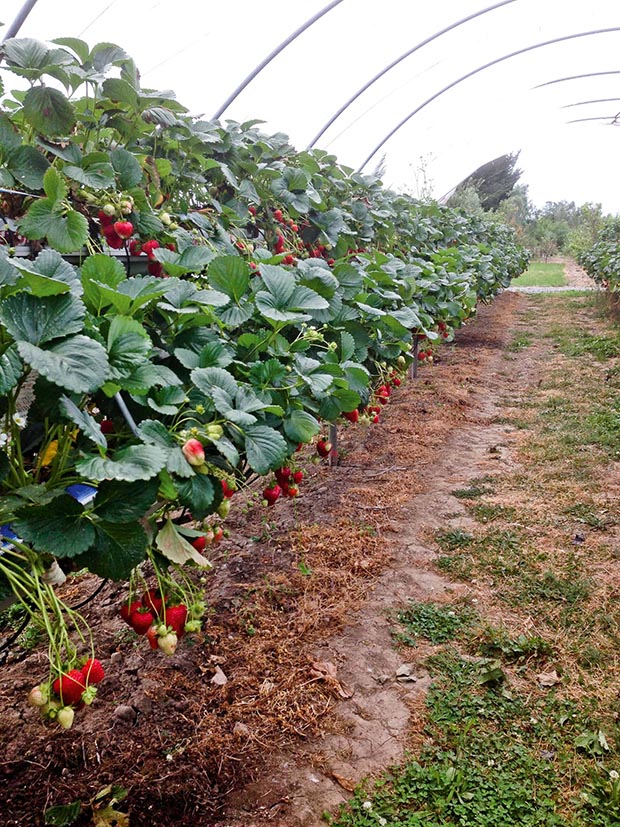 Since installing the system yields have increased, something Alan puts down to there being no damage to the fruit, especially from rain. “Being up off the ground when it stops raining, the air circulates and dries the berries very quickly, it gives them a good air flow.

“I think generally pollination is also better for some reason, instead of the bees working on the ground I think they like the height thing as well, although obviously I can’t ask them.”

In the triple tier system the strawberries are planted in coconut peat (Coir) which helps hold the moisture in and has reduced the amount of water needed, another important benefit of the system. Alan says he has also noticed an improvement in the quality of the fruit produced and the size, which he describes as “definitely bigger.” There is also no need to rotate the crop in the ground, and less use of chemicals, although Alan has his own secret fertiliser mix that saturates the plants with nutrients with the aid of a pump at a pre-set time.

Although the Wee Red Barn is well known for its strawberries, the couple soon realised they needed to be able to offer more. Today they also produce raspberries, blackberries, boysenberries, gooseberries, red and black currants, potatoes, tomatoes, leeks, beans, garlic, free range eggs, jam made from surplus fruit, olive oil, and wine made from their own grapes. After six years Alan says the business has grown a lot but it was the first two years that were the hardest and most costly. “It’s typical farming – you’ve got to spend money and you don’t get anything back until you sell it. At least now we have created something that is here and can be here for a long time to come.”

Since setting up the triple tiered system Alan and Dot have had a number of visits from growers, especially in Australia, who have contacted them to learn more about it. Such is the interest some have even come over to visit them and see the system in operation. In the few years they have had the business Alan and Dot have also won several awards. Last year they described themselves as “dumbfounded” when they were announced as winners of the Hill Laboratories Harvest Award. Although among the finalists, neither expected to win when they viewed the competition they were up against, so the announcement at the 2012 Greater Wellington Ballance Farm Environment Awards ceremony in Martinborough was a complete surprise.

At the time the judges described the couple’s passion and enthusiasm as the driving factors in the success of their intensive horticultural operation based around the Wee Red Barn, which they described as a UK farm shop-styled retail outlet. They were also praised for their astute local market analysis, supplying product where and when needed, and their passion and amazing ability to multi-task in a complex business.

More stories you might like:
What your soil is trying to tell you with sound, smell and colour

Although they had won the Lifestyle Block category of the awards in 2009, last year’s win was a significant step up to the main categories and a clear indicator of the growth and success of their business. While their property and volume of fruit may be small compared to the bigger commercial growers, sales are strong and demand is high, a sure sign of a successful business and one that is putting money back into the local economy. The quality of their fruit sees little left on the shelf and as Alan points out, nothing is ever wasted. “We sell throughout the Wairarapa from the shop, at stalls and even from the roadside but we don’t supply shops or supermarkets. Anything not suitable for sale we feed to our pigs.” 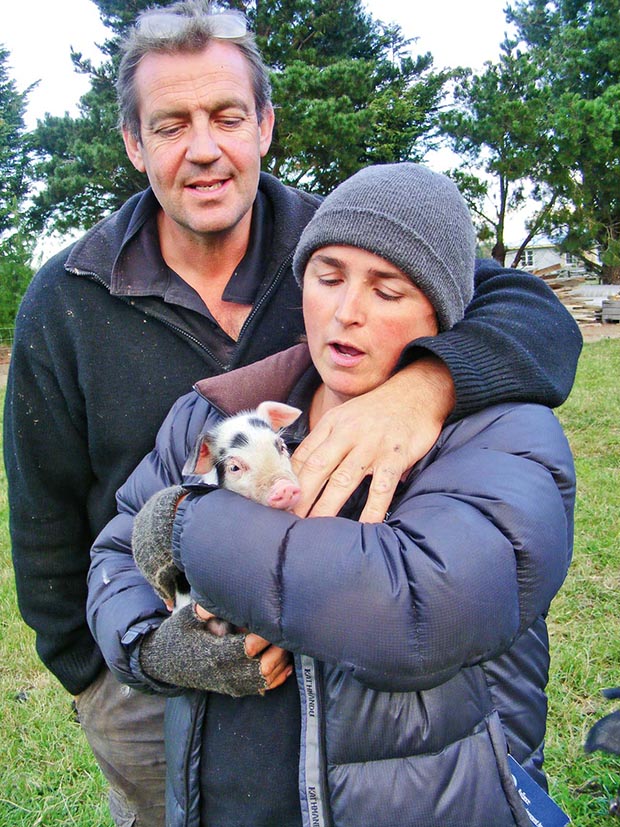 They’re not planning to expand, but Alan and Dot have renovated an area of their barn behind the shop which hosts functions such as wine tastings and wedding receptions. It is also used for educational purposes for the many school children who visit their business. They have a close relationship with pupils from the local Opaki School, and the school’s food scraps feed the couple’s pigs. Pupils visit during term time to undertake jobs such as planting and helping in the shop. 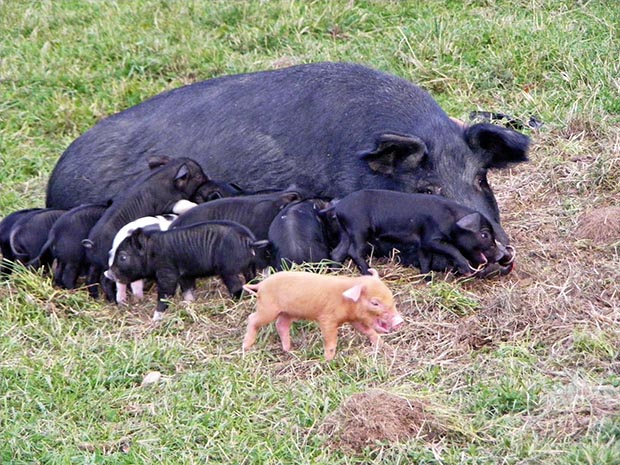 For those who like to sit back and relax, the couple offer guests the opportunity to enjoy a tour of their property and taste some of their wonderful wines, all made from grapes grown on their own vines. Today the business is anything but ‘wee’ with regular customers and visitors to the region popping in to either purchase from their huge selection of fresh fruit and vegetables, or to buy the jams, pickles, vinegars and olive oil, made by Dot from produce they grow.