The roasted turkey of your dreams is guaranteed to impress (and satisfy) a crowd.

Heat the oven to 180°C. Use a baking spray to lightly grease the sides and base of a large roasting tray.

Remove any innards from the turkey. Dry the turkey inside and out with paper towels. Fill the turkey’s cavity with Red Rice Stuffing. Tie the legs together tightly with culinary string and place the bird in the roasting tray, legs up. Brush with olive oil and season with salt and pepper. Place orange quarters around the turkey and add water to the tray.

Bake for 2½ hours, basting from time to time (if turkey begins to look brown, cover with lightly greased aluminium foil). Remove from oven and generously smear turkey with marmalade. If necessary, once again loosely cover with foil. Return to the oven for 30 minutes, then test with a thermometer. Insert meat thermometer into the thickest part of the inner thigh, but not touching the bone. The temperature needs to reach 80°C. Juices should run clear, and the marmalade should be sticky and golden.

Remove the turkey from oven and place on a warmed platter. Loosely cover with lightly greased foil and let rest at room temperature for 20 to 30 minutes while preparing the gravy. Place the tray containing the roasting juices and orange quarters over medium heat. Add reduced chicken stock and bring to the boil, scraping up all the good bits from the base of the tray. Pour this mixture through a fine sieve set over a small pot. Use a potato masher or similar to push down to add maximum orange juice to the pot.

Bring juices to the boil, reduce to simmer, and add the cornflour water mixture. Add chopped herbs just before you serve. Taste for seasoning.

Display the turkey on the platter. At the table, portion turkey into body parts and carve each one (remove a breast and then slice it). Be generous with the Red Rice Stuffing and accompany with orange gravy.

Cook’s tip: Freeze any turkey innards along with any leftover turkey meat and carcass to use in a dish later, such as turkey chowder. 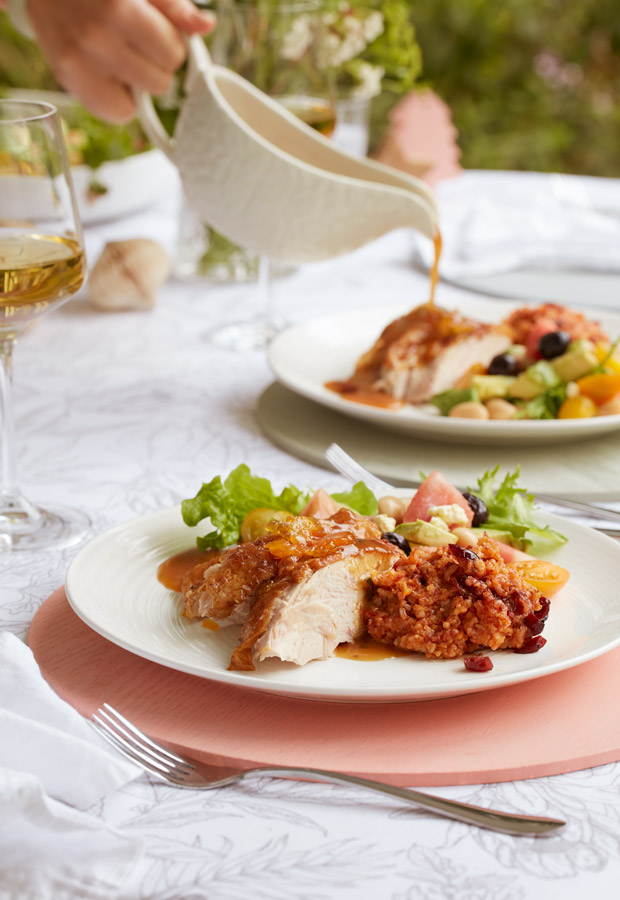 Heat the oil in a saucepan. Add the onion and garlic and fry over a medium heat until they are starting to soften but not brown.

Tip out onto a tray to cool. Use to stuff the turkey when completely cold. Makes enough to fill one 7kg turkey

Cook’s tip: Stuffing can be made a day or two in advance and stored in the fridge. For little roasted rice balls to serve alongside the stuffed turkey, make an extra batch of rice stuffing. Roll it into balls and place into the turkey tray when the bird is spread with marmalade.