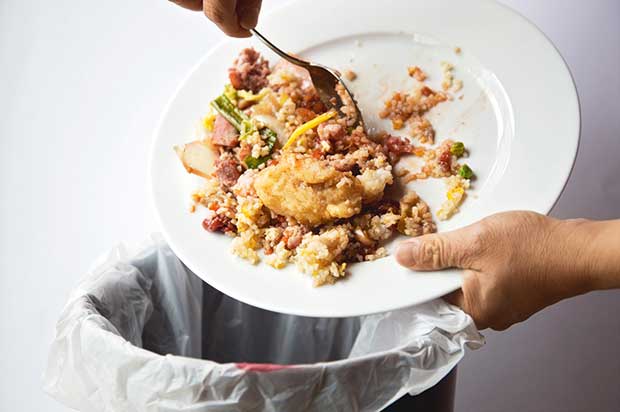 Thirty percent of all food produced on the planet is not eaten, and Kristina has a recipe for that.

There are no leftovers dumped in my kitchen because I try to use up everything. But after going around the back of a supermarket and looking surreptitiously into a skip, I can understand it.

Many food businesses are trying to minimise waste by passing on food that is no longer fit for human consumption. It either goes to animals or is composted. It is a great initiative.

Research also shows that people feel guilty wasting food so there is hope for us yet.

My hope has always been that sharing my ideas could introduce someone to a new way of thinking about food. As one writer put it, you have to think ingredients, not leftovers. I heartily agree.

There’s been a marked increase in the amount of pressure on us as cooks to pull up our socks and get on with being good humans in the kitchen. It’s high time we realise the culinary errors of the past – sugar, trans-fats – and find ways to ensure the future of our bodies and ultimately, our precious planet.

But some people seem to be quite willing to lie down and give up. Overwhelm is supposedly what ails us, and it appears from my point of view to be at an all-time high.

I am not immune. There are moments when I truly wonder what the heck we are doing. That’s when I take heart from the words of an old man I met on a West Coast beach almost 30 years ago.

This chap was wearing a big heavy overcoat and he was raking the sand in an almost aggressive manner. My children, toddlers at the time, were wondering why I was leading them towards this creature.

When I asked him what he was doing, I received a barrage of bitter words. He was very concerned about the way the land above the beach was being developed. His raking was his effort to try to stop the sand from drowning the grasses growing along the edge of the hill. His hope was that they could stop the constant erosion from run-off and wave action.

I thought it was probably a bit futile but I appreciated his passion for the environment. As we turned to leave, he spat out some words that have stuck with me ever since.

“What are we doing here if we can’t leave it better than we found it?”

This has been my personal mantra in times of overwhelm. When I get down about all of us ‘bad’ humans, I remember his words. Then I look around me to see what I can do to make it better.

This can often be a small thing, like recycling. It can be a larger altruistic activity like planting trees.

It’s easy to think that one person can’t make a change.But as the Dalai Lama says, if you think you are too small to make a change, try sleeping in a room with a mosquito. Every little bit counts, and the little bit I want to promote here is the conscious use of leftovers.

In my mother and father’s generation, this was a given for most people. Families were often larger, people had to work hard, and the Depression was still a close memory. These generations knew the value of growing their own food, eating seasonally, and preserving to nourish their families and friends. Nothing was wasted.

More stories you might like:
Water cooler: How to cook shellfish, scarves and a touch of optimism

An acquaintance told me that his uncle used to live in the house we now live in. When the river flooded one year, it raced through his pumpkin patch and carried the ripe vegetables out to sea. He spent weeks going down to the beach to collect the pumpkins that rolled in with the tide because that was his only supply. It was too valuable to go to waste.

Thankfully, the river has only broken its banks once while we have lived here and it didn’t run through the pumpkin patch. Good thing too, as it might have picked up the dead deer that was buried there.

That would not have been a pleasant contribution to the tide. It is a good use of inedible leftovers. When I first came across a recipe that read ‘au gratin’, I was curious to know what it meant. Wikipedia tells me that au gratin is a ‘widespread culinary technique in which an ingredient is topped with a golden crust, often breadcrumbs, grated cheese, egg
and/or butter’.

The etymology of gratin is from the French words ‘gratter’, meaning to scrape or grate, and ‘gratiné’, which means crust or skin.

It all sounds terrifically fancy. It is what my mother put on many of her dishes when we were growing up, probably with the intention of making whatever was in them more appetising to small children. The combination of melted cheese and breadcrumbs is irresistible.

This is my recipe honouring both the French culinary tradition and my dearly departed mother.

If it sounds too good to wait for leftovers, then start from scratch. You could just use one vegetable or a combination of any of the following: baked or boiled potato, kumara, parsnip, beetroot, carrot, pumpkin, peas, silverbeet, corn or zucchini.

If you’re using fresh vegetables, bake in the oven until cooked. Slice or chop vegetables into cubes.

Mash slightly with the butter and wine. Add the cheese, sour cream, salt and pepper and mix well. Pour into a greased oven dish, then sprinkle with breadcrumbs, Parmesan cheese and chopped herbs. Nicole Barratt: How I went plastic-free for a month (it’s not as hard as you think – promise)