An ode to laundry

Every now and then, a gypsy friend of ours turns up for a night or two in our caravan. He usually arrives with some unusual offering – random souvenir salt spoons, an oven tray, an ancient glass pipette found in an op shop – all endearingly presented as treasure. He also carries a cache of after-dinner stories garnered during his latest meanderings out on the road.
Gully, as he’s known, travels with a gleam in his eye – an infectious fervour for whatever latest scheme he’s concocted to make his fortune. This manifests on our dining table in unpredictable ways; a pile of grease-spotted fish-and-chip wrappings on which he’d written a potential best-seller, the lumps of old sea sponge he’d identified as ambergris, and the brochure for a supersonic metal detector capable of finding gold deep within the earth. 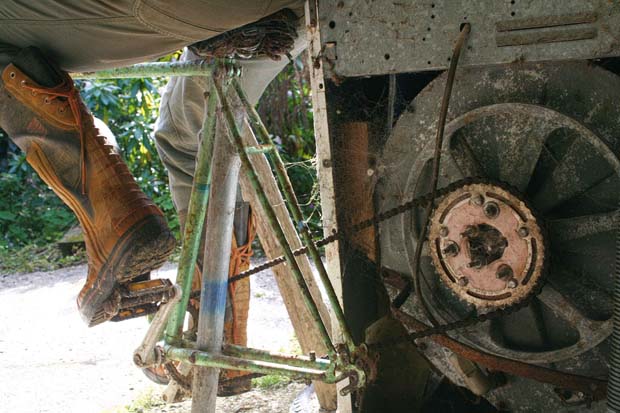 So convincingly does he speak of his get-rich strategies, that James and I always farewell him hoping that this time he might just hit the mother-lode.
For now, though, he lives between his car and a pup tent, and I’ve always imagined that when Gully comes to us, it’s for a bit of home comfort, especially during the winter months when a double bed and fireside cushion must beckon rather enticingly.
So I was surprised when he failed to share my enthusiasm for our new kitchen and other developments we’re making on the property.
“I liked it better the old way,” he said apologetically, referring to our outdoor kitchen/ lounge where winter nights were spent wrapped deep within layers of down. “It’s not so magical coming inside.”
It’s a sentiment shared by another sporadic visitor who maps our home’s evolution with dismay. “But why do you want to live in a house?” he cries, refusing to come indoors. “Out here is the natural way.”
Still, after he’d washed his clothes a few times using our outdoor washing machine, he did at least understand my animation for progress when we recently moved our laundry set-up inside for proper plumbing.
Under the old system, our generator-run machine sat on the building site on a pallet and needed 120 litres of water to be fed in manually for every wash. This necessitated a procedure of running hoses, filling buckets and frequent floods as things overflowed. It also meant draining the resulting grey-water from its drum onto the fruit trees via a gravity pipe that required sucking on one end to get it flowing. The whole process was time-consuming and – every time I gagged on an accidental mouthful of old, soapy water – incredibly enraging.
I had vowed to love our washing machine forever, falling upon it with the gratitude of a 19th-century pioneer when we first brought it home, as I gleefully farewelled days of hand-scrubbing socks and jeans. Doing laundry had been my No 1 hate on the land.
Getting clothes clean has almost served as a rite-of-passage for those who’ve opted for an off-grid existence around these parts. Folk like us, who’ve started from scratch, all have their laundry tales to share and some recall bygone years of hand wringing wet nappies by winter streams with a certain grim satisfaction, as if the collected chilblains were proof of their ability to stick it out in the hills.
Across the valley from us, beneath the eaves of an abandoned home, lies the fruit of one inventive bush-dwelling couple who got so fed up pounding dirt from their clothes, they attached a bicycle to an old washing-machine and used to literally pedal their laundry through its spin cycles.
If ever I envied them their contraption, those days are gone. Finally, after five years of cursing, cleaning our clothes requires nothing more than the push of a button and I’m about ready to recommit to my vow of love for our washing machine.

In the next post, Polly and James plant a vision.