One of Graeme’s designs, a stoneclad home with mud brick walls and floors.

Renowned architect Graeme North has spent his whole professional life involved in the natural homes industry and still loves to get his hands stuck into some mud.

Natural homes have a secret quality that people love. But even after 40 years of designing, building and living in them, architect Graeme North hasn’t cracked quite what it is.

“It’s intangible stuff some of it, I find it very hard to quantify or even talk about. It seems to be a sense of wellbeing by living within natural materials. People react very positively to the indoor environment in a natural building. You get a moderation of temperature, a moderation of humidity.”

But for many people, it might seem like you have to be a hippie to like the style of a natural home. Graeme says there are dozens of designs which show how modern aesthetics can be created using old technology.

“I think the hippies had it right!” he laughs. “But natural materials can be used in very slick, very chic designs and are.”

He’s found natural buildings attract people who tend to want to invest in craftsmanship by trained artisans. If that’s the case, the end price of those homes will be comparable to a ‘conventional’ one. But it’s also attractive to the owner-builder because you can save on your building costs, although you’ll still pay a price says Graeme. 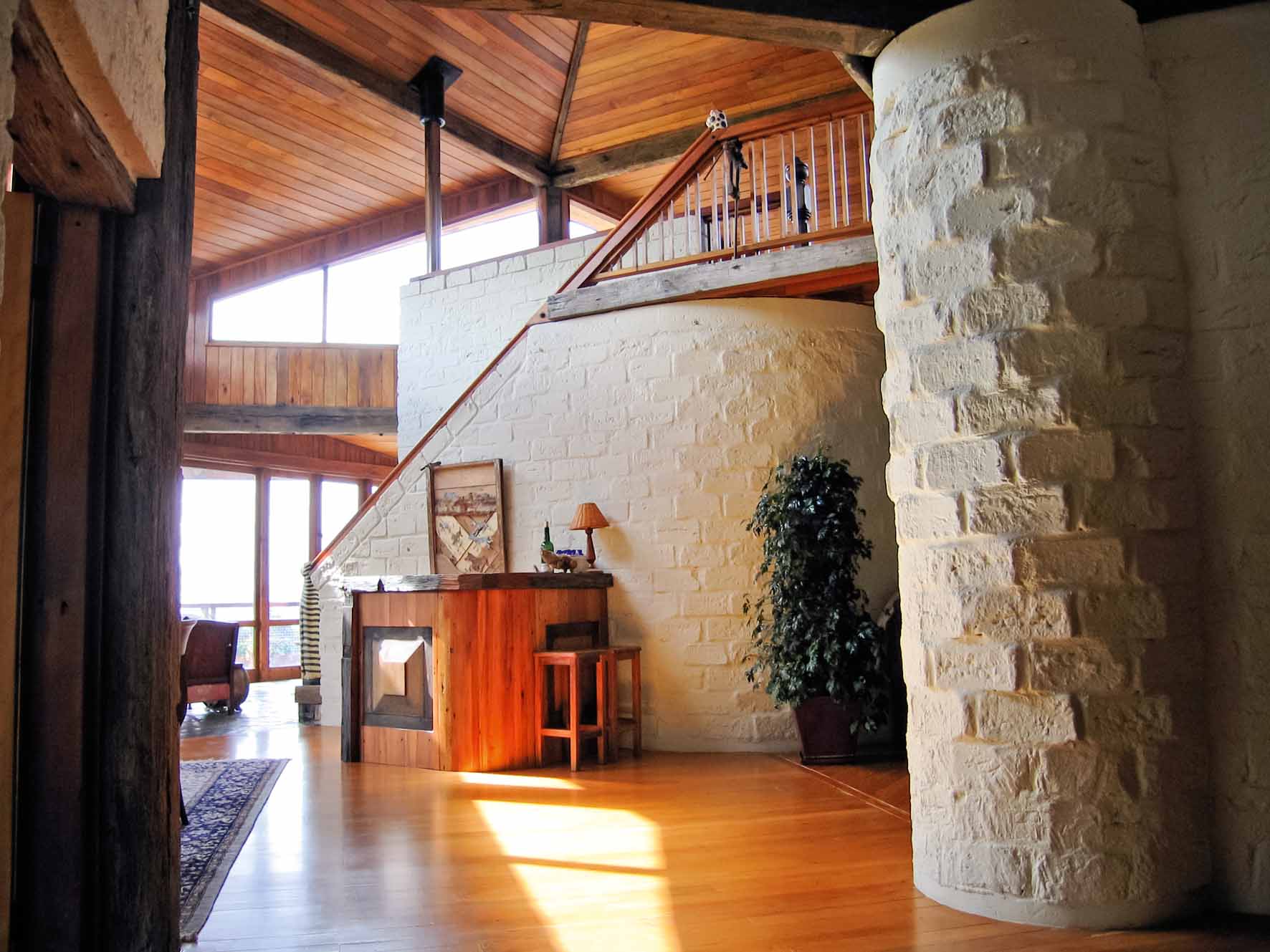 “People think that because earth and straw bales are cheap, the houses should be cheaper, and they can be if people are prepared to do a lot of work. Somehow or other you have to pay for that labour, whether it’s feeding yourself or feeding your family or feeding your mates or whatever, time off work, all these sorts of things.”

In Graeme’s experience, people come to a holistic decision when they choose a natural home. It’s environmental, in terms of the non-toxic materials they will live in. They can get the opportunity for hands-on participation in the building process if they wish. They are using materials that are close by, sometimes even on-site.

“It’s using what’s available locally in as unprocessed a form as possible to do good stuff with, do good work with, build sound houses with, whether it’s untreated timber or clay or stone or straw.” It is thanks to Graeme and fellow pioneers of the Earth Building Association of NZ (EBANZ) that anyone in NZ can build a natural home using techniques like rammed earth or adobe. The group created the official Earth Building Standards which cover design, materials and workmanship.

“Earth building in New Zealand has the same status in the Building Code as timber, concrete, steel,” says Graeme.

“The difficulty you find is not many people are familiar with designing for the material, so finding expertise can take a little bit more digging.

“The buildings I’ve done, the difficulties have never been the natural material. It’s the things you encounter in any building, like the building process officer has just gone on a course on hot water cylinders and demands information you’ve never had to provide in 40 years about what your hot water cylinder is made out of.” 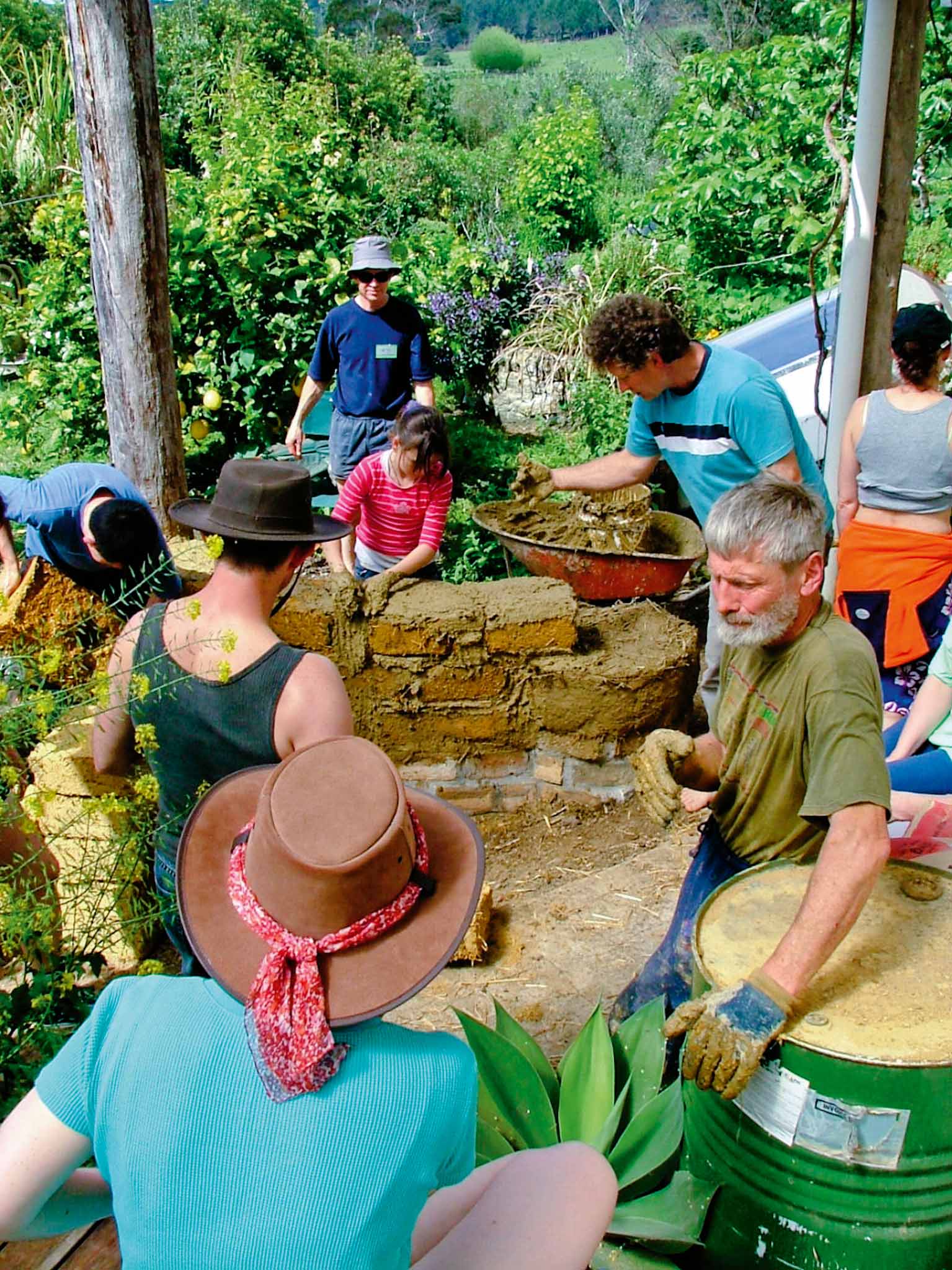 Earth buildings do have a certain style and that’s because there are some aspects you can’t get away from when you’re designing one. For example, many designs have much wider eaves than you’d see on a timber home.

“There’s an old English saying that talks about earth buildings, and it applies to straw buildings as well, that basically you’ve got to give them a good pair of boots and a good hat,” says Graeme.

“The good boots are to stop moisture coming up from the ground and getting up into your walls from below, or splashing up from the surrounding area onto your walls. The more intense the rain, the bigger the hat (eaves) you need. It protects the walls from the worst of the weather, and then the other detailing you do. The plaster finishes keep the moisture out, and by taking that approach we’re able to build very successful earth and straw bale buildings in New Zealand.”

What earth buildings can do very well is create a comfortable climate for the people who live in them, although contrary to what some people assume, it’s only straw bale that makes for good insulation. “There’s an old saying that these buildings are warm in winter and cool in summer – which is true of a well-designed earth building – but if we do get a few days without much sun, as we can in winter, an earth building will cool down because dense materials don’t make good insulators and once you’ve lost your heat it takes a bit to gain it back.”

That finding led natural home experts in NZ and around the world to experiment with adding straw, wood shavings, paper pulp and other lighter aggregates to earth bricks and mud mixes for their insulatory effect.

“By lowering the density of the bricks we are making them stronger, giving better insulation and they’re also easier to use because they are lighter, and they are easier to design for structurally because there’s less mass involved.”

However, if you think Graeme is going to try and persuade you to build a natural or earth home, you’d be wrong.

“I will tell people that there are these options but I don’t try and talk them into it. They have to want to do it because they like it or they think it’s feasible or it’s for them. I don’t try to talk people into it because then if they’re disappointed they’ll blame me!

“You can talk about toxicity and environmental benefits until the cows come home, but people aren’t generally persuaded by that. It’s a much more visceral, an emotional response.” 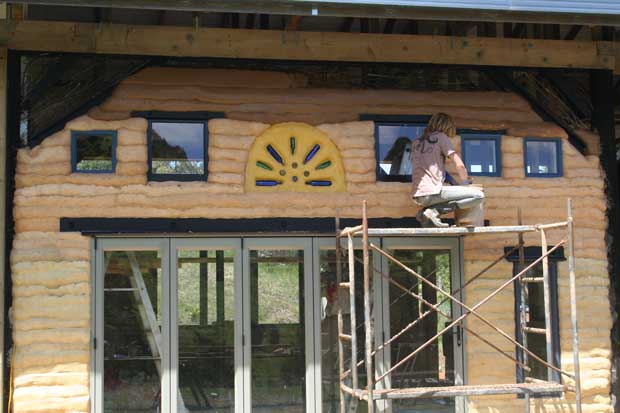 READ MORE: Polly Greeks and her husband James are building a mudbrick home in the Far North.

“It’s a tactile thing, it’s a visual thing, definitely. I’ve got a patch by my front door that’s been touched by just about everybody who comes into my house. The first thing everyone does is they touch it, they like it, they start to smile, and then they look around at everything else.”

“I’ve got two buildings – one’s new and one’s old – and the old one, we put earth plasters inside it, well over 10 years ago, I can’t remember. Usually in a house of this age we’d be looking at redecorating it. But I looked around and thought there’s actually nothing to do, the walls are as good as the day they were finished, absolutely nothing needs to be touched on them.”

Graeme recently stopped by to look at the first natural house he designed back in 1971. It’s made out of earth, second-hand bricks and timber. He was delighted to find it in good order.

“I hadn’t seen it for 30 years. I bowled up and the woman who lives in it now popped up out of the garden. I introduced myself to her and she said, ‘oh, Graeme I’ve always wanted to meet you, not a day goes by that I don’t thank you for my beautiful house.’” When it comes to his own home, Graeme has a little bit of everything natural. There is cordwood, straw bale and cob, with inserts of cordwood, bottles and old bricks, all in one wall. There is mud brick, an earth floor and an earth-plastered ceiling, and all the wooden joinery is second-hand.

“It wasn’t to show people really. It’s just because it seemed to be the right material to use in the right place. I used very lightweight bricks and straw bales on the southern side of the house for insulation, a big thick cob wall through the guts of it for thermal storage, mud brick where I wanted thinner walls. It’s about 90-100m².”

The conservatory in his new house (pictured above)  has extensive windows but lots of thermal mass to keep it warm and cosy when it’s cold. However, it can also open up to let in air and light in good weather. On the day we talk to Graeme, it’s a bit chilly in his office, an old villa next door to his natural home.

“I wish I was in the new house, it’s a lot warmer and a lot more comfortable. They’re like two different countries these two houses side by side, the way they perform is so different, it’s just unbelievable.”

His passion for natural building is unwavering. He’s now behind the Yes, In My Front Yard Trust which promotes the use of locally sourced, low-to-no processing materials which can be put in place fairly simply by people using fairly simple techniques.

He also still likes to get dirty. “I’ve made a living out of mud. I still genuinely like getting my hands in mud, it’s very pleasant stuff to use. Working with timber or stirring a bit of mud around, it’s pleasant, it’s a nice material to touch, to handle, to work with.”
www.yimfy.org.nz

Where: Riwaka, 50km north-west of Nelson The straw bale house architect Philip Kennedy designed doesn’t appear to have a front door. It has nine doors so visitors can take their pick.

The main living area is built out of straw bale, surrounded by timber framing, sprayed with a clay slurry, then plastered with a mixture of clay, straw and sand which was applied by hand and smoothed over. The bedrooms are in a separate wing, a two-storey, cedar-clad building designed to look like a tobacco kiln. 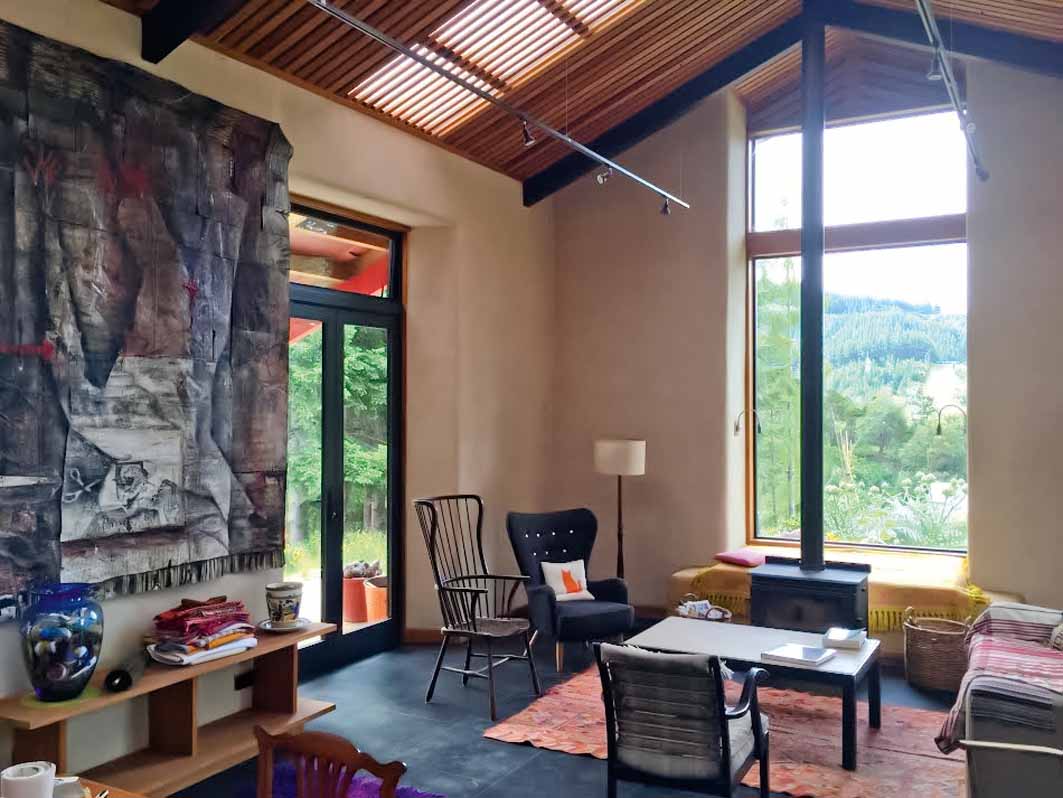 The high ceiling is made of batons which have an acoustic effect in softening the sound in the room. Much of the timber framing for windows, doors, cupboards and shelves is rimu that was salvaged from the couple’s old red-zoned house in Christchurch.

The house took close to a year to build, with several different contractors including a carpenter and earth builder working on its construction. You can take a walk through it here. Blog: You can’t get good help these days