Become enamoured with Tairawhiti: The best places to eat and explore in Gisborne SPONSORED There’s soft, soul-warming magic hidden within the first light of a new day. Sunrise is cleansing; it brings hope and optimism. This light is never purer than in Tairāwhiti Gisborne, the first place on the New Zealand mainland to see the light.

Tairāwhiti, meaning the coast upon which the sun shines across the water, attracts dreamers, lovers and sunseekers. Many people visit to dip their feet in the surf and end up diving headfirst into ‘Gizzy’ life. It’s simply too easy to fall in love with the lifestyle, the heritage and the laid-back endless summer attitude.

The famous Tairāwhiti Gisborne sun may illuminate the region, but there is plenty more to discover once you tear yourself away from the beach. The history is rich and powerful, the people creative and innovative and the shopping top-notch. 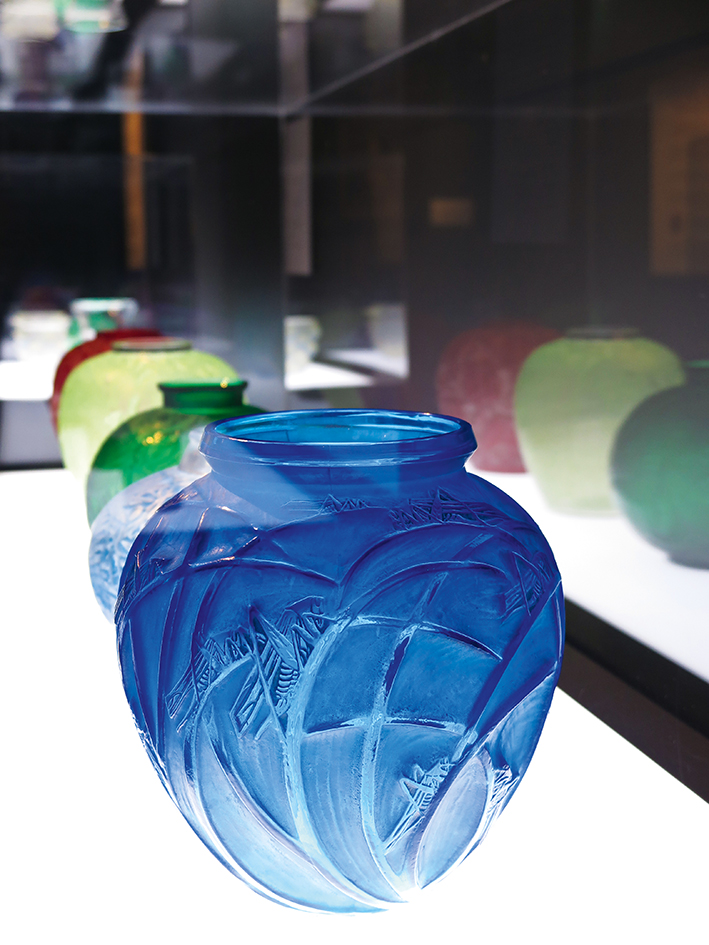 There’s something special around every corner in the Tairāwhiti Museum. Local artists exhibit their works next to an in-depth history of the region and celebration of the rich Māori heritage. Wander through and find the Jack C Richards Decorative Arts Gallery (linger over the kimonos) and the most extensive collection of Lalique vases in the Southern Hemisphere. Downstairs is the Te Moana Maritime Museum, which celebrates the depth of the region’s nautical history, from surf lifesaving to shipwrecks. Surfing has a dedication too, with old boards that will no doubt leave the modern surfer slightly baffled.

The best story belongs to the Star of Canada, and how its wheelhouse came to rest on the riverside. The ship was blown onto rocks while anchored off the Gisborne coast and was dismantled by local engineers. Jeweller William Good purchased the wheelhouse and had it placed on Childers Road where it became a tourist attraction (Miss New Zealand even visited on the 50th anniversary of the sinking). In 1983 it was bequeathed to the people of Gisborne and eventually moved to the museum. 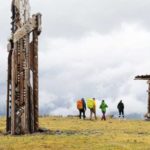 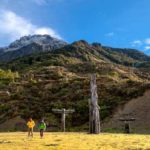 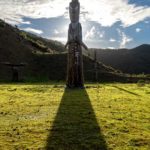 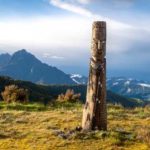 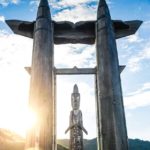 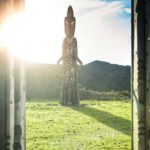 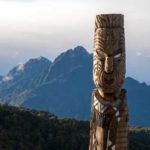 Inland from the beaches of Tairāwhiti, Maunga Hikurangi is the sacred mountain of Ngāti Porou. At 1754 metres it is the highest non-volcanic mountain in Aotearoa’s north, and it has a seriously important reputation because when Māui fished up the North Island, the top of Hikurangi was the first bit of land to emerge from the ocean. According to legend, Māui’s bones lie on the mountain, and his canoe, Nukutaimemeha, rests in Takawhiti, the lake near the summit.

There are two ways to access Maunga Hikurangi. The first option is to take a guided 4WD tour with Ngāti Porou Tourism. Ngāti Porou is the kaitiaki of Maunga Hikurangi -the only guides with access to the land. This may be one of the best spots in the country to see the new sunrise, and Te Urunga-Tu – Sunrise Experience has been carefully planned to capture the rays from the summit of Hikurangi. Late risers may miss the sunrise but can still explore the maunga, including the nine massive carved sculptures (whakairo) depicting Māui and his family, with Haramai – Day Experience. Both trips include a karakia, local guide (and their repertoire of legends, local history and cultural knowledge), light meal and planting of a native seedling.
Maunga Hikurangi Experiences is via Ngāti Porou Tourism. info@maungahikurangi.com or 022 383 5381

The second option is for hikers to explore the maunga via an 8-kilometre DOC track. There is a shingly bit halfway that is challenging and, nearing the summit, it is steep and tricky enough to make the heart flutter but just enough to give a real sense of achievement on reaching the trig at the top. On a clear day, you can see forever. doc.govt.nz 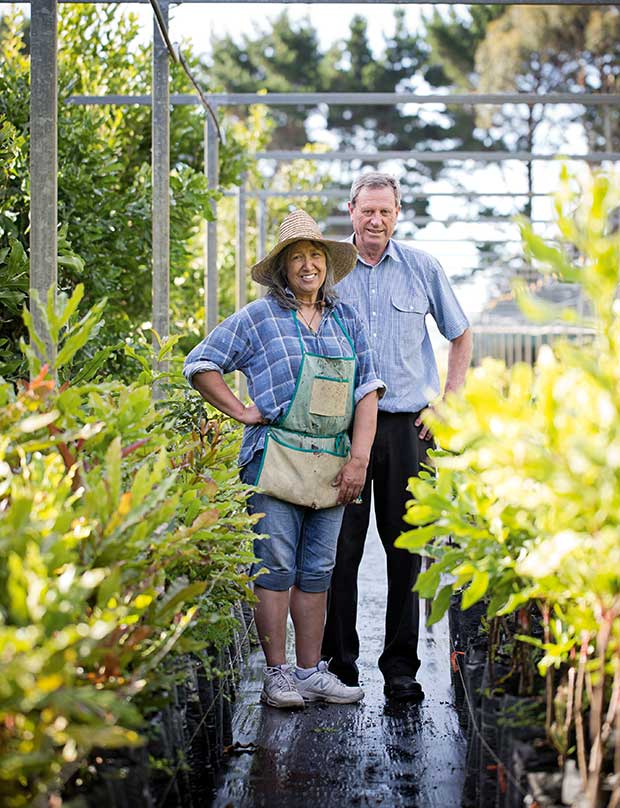 A successful entrepreneur who runs her own insurance company, Vanessa Hayes is best known in Māori business circles as the Nut Lady on account of her macadamia interests. Together with her partner Rod Husband, Vanessa owns a sizeable organic orchard at Torere near Opotiki, as well as a de-husking plant and a nursery (they’re on track to have 50,000 trees by later this year). There is also a purpose-built classroom for her NZQA Level 2&3 Macadamia course.

While Vanessa and Rod’s main focus is growing the macadamia-nut industry in Aotearoa, the public can happily enjoy the rewards of their efforts. They sell half their 7000-kilogramme crop in bulk as the raw kernel with the remainder made into a delicious range of products including the honey-roasted nuts, dukkah, pesto and macadamia butter that Vanessa sells at the farmers’ market.

Note: anyone who has ever tried to break open a macadamia nut might be interested to know that it requires a force of 300psi to crack the smoothly spherical shell – that’s roughly equivalent to the bone-crushing bite of a rottweiler. So don’t even think of using your teeth.
toreremacadamias.co.nz 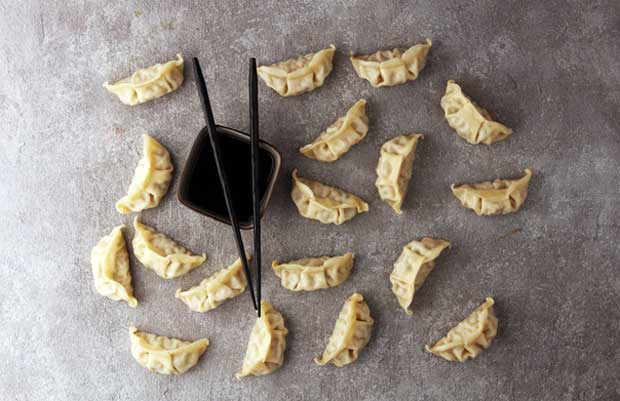 Toru, Hiro and their mini dumpling-chef-in-training Taizo serve little parcels of deliciousness to their adoring public every Saturday morning between 9am – 12.30pm. Miso soup, handmade dumplings and shumai are all on offer, beautifully served on cabbage leaves to cut down on the plastic packaging. Too early for a gyoza breakfast? Pre-order a pack of 12 handmade dumplings before Friday and pick up on Saturday ready for the evening’s dinner. 021 02792879, facebook.com/bikisgyoza 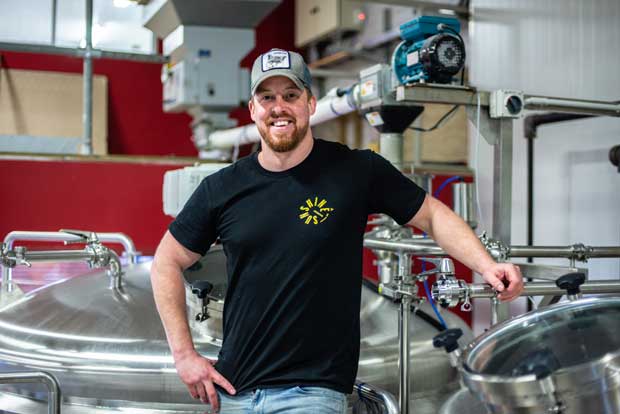 New Zealand’s oldest independent brewery celebrated 30 years in the beer business in 2019 and is moving into the new decade with an ever-changing range of full-flavoured beers perfect for a sandy-footed afternoon in the Gizzy sun.

Sunshine Brewing’s Gisborne location has 12 beers on tap, including three ‘Heritage’ brews (Gisborne Gold, Green and Red), seven in the core range and the rotating line-up of experimental seasonal brews. If available, try the fresh, lemony East Coast Saison, winner of the Brewers Guild of New Zealand Beer (European Ale) trophy, or the Once Were Watermelons, a “super-refreshing kettle sour with layers of ripe watermelon and guava”.

Tastings and tours of the brewery are on offer for visiting connoisseurs, and there are light bar meals available, including pizzas – just another reason this is a favourite with locals looking for a post-work or post-surf beverage. Keep an eye on their Facebook page for the Beer & Dumpling Friday Nights, hosted with Biki’s Gyoza. It’s the best flavour marriage since wine and cheese. Hawke’s Bay architectural designer Andy Coltart is justly famous for his beach houses. The Blackhouse was moved to Wainui Beach in 2011 and has since enchanted a range of guests. With its statement fireplace, floor-to-ceiling library and industrial kitchen, guests would be forgiven for wishing for bad weather – there would be few better places to steal quiet days away from the world.