A beginner’s guide to Japanese Quails 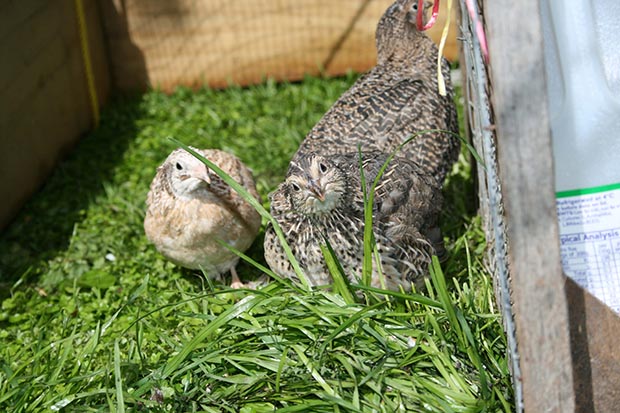 Don’t let the size of the little Japanese quail fool you: this is a bird that can lay well above its weight.

Japanese Quail eggs are a delicacy only available from delicatessen at certain times of the year and maybe at top-notch restaurants. So when I saw an advertisement for fertile quail eggs for hatching I couldn’t resist and ordered a dozen and a half. The idea of having a few quail laying eggs for us sounded very attractive, and as it turns out, they are the most productive birds we have ever had.

A few days after ordering, a box arrived from the other end of New Zealand containing 18 very well-wrapped quail eggs which looked like small works of art. Each and every egg had a different pattern of dark brown splashes of colour on a blue-green background. 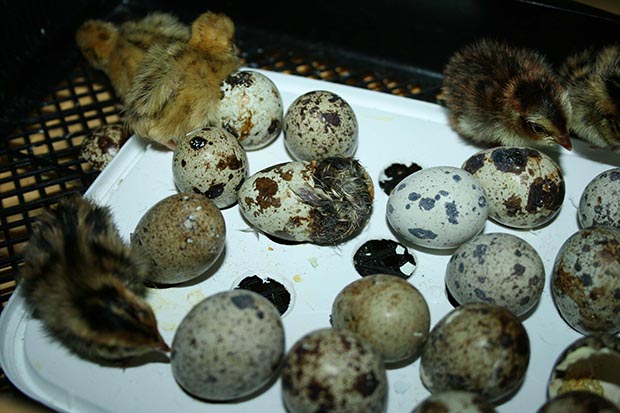 Quail hens from domesticated strains are not exactly known for being good ‘broodies’ so hatching quail eggs in an incubator is a good option. If quail eggs are to be incubated by a hen it should only be attempted using the smallest bantam such as a Rosecomb or Sebright as quail chicks are very small and delicate and anything bigger would squash them.

A peculiarity of quail eggs is that they don’t all hatch at the same time. Most will hatch on day 16 or 17 of an incubation period but it can vary between 15 and19 days and there can be up to four days between the first chick and the last chick hatching.

RAISING QUAIL CHICKS
Once the tiny chicks hatch they need to be transferred to a small brooder with a heat source, such as the 40Watt incandescent lightbulb we use for warmth. Quail chicks have very long legs for their body size and it takes a while before they are able to walk confidently. This is the phase when they are most likely to be trampled to death by a hen. 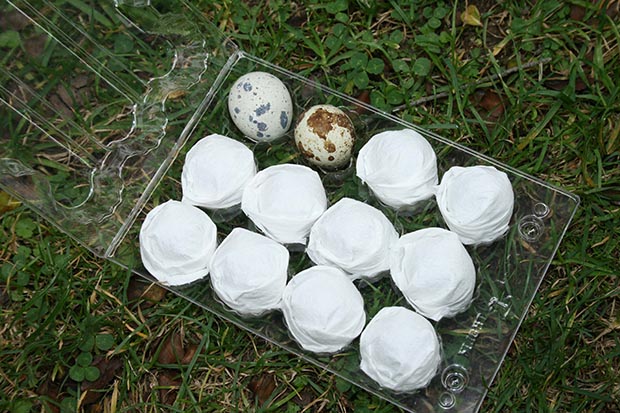 Quail eggs wrapped up for posting.

Quail chicks need food in very small portions and a Chick Starter mash is best – you may need to order this in at your local feed supply store. If mash is not available, the next best option is to put some Chick Starter crumbs into a food processor so that they can be fed to the quail chicks in a meal-like consistency. Feed especially formulated for quail is available but only from a few specialised stores.

The smallest water dispenser available from a feed supply store is just right for quail chicks. 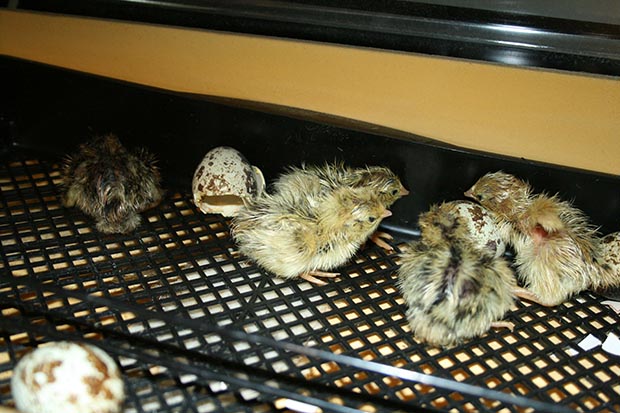 Japanese Quail are available in a variety of colours.

Quail chicks grow rapidly and feather up very quickly. When our Japanese Quail chicks were about three weeks old they started to spend time outside in a small rabbit hutch-type pen when the weather was warm. At the age of five weeks we moved them to an outside pen permanently and they looked fully grown.

BOYS OR GIRLS?
I had read a lot about sexing young quail, and spent many hours looking at them, especially at their chest area. As Japanese Quail are available in a variety of colours I found it difficult to identify the male before he started to mate with the females. But once he was chasing the girls it became quite obvious that the dark feathers on his chest were what I could use to identify the boys. 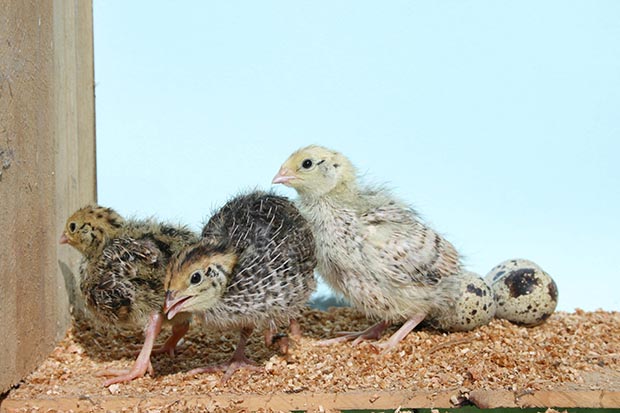 Once these tiny chicks hatch they need to be transferred to a smaller brooder with a heat source.

EGGS-CELLENT
I couldn’t believe my eyes when one afternoon I opened the lid of the quail pen and saw a quail egg. The quails were just seven weeks old and one had already laid her first egg! After proudly showing this egg to every family member, it took pride of place on the kitchen window sill. The next day two laid an egg each and a day later there were three eggs.

From then on each quail laid an egg almost every day until the end of summer. We incubated many of the quail eggs but a lot were eaten, either hard-boiled as decoration on salads, pan-fried next to a chicken egg (looking like the earth and moon), or poached. 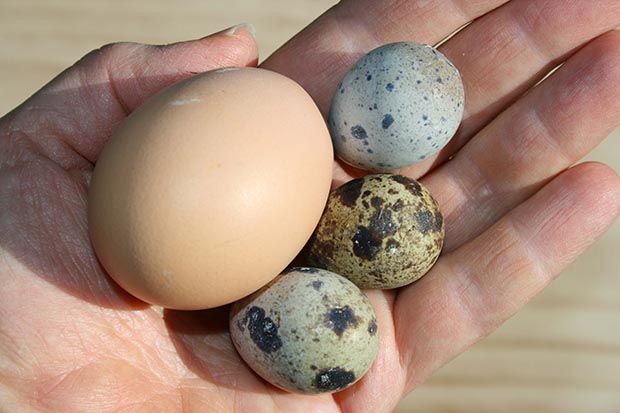 Comparison to a domestic hen egg.

The quails laid so prolifically that most visitors were given a few of these novelty eggs to take home. Despite the presence of a number of very decorative poultry breeds in our garden, the quails became the talking point no matter who came to our house.

Quails are very photo-sensitive which means that they need a minimum of 14-16 daylight hours to produce an egg. In commercial operations artificial lighting ensures that Japanese Quail lay all year round, but in a setting without artificial lighting quail stop to moult at the end of summer.

HOUSING JAPANESE QUAIL
Many quail species are kept in apiaries to populate (and clean) the floor area but when quail are kept on their own, a rabbit hutch-type pen can be used. All quails can and will fly so it is imperative that their pen is covered with either chicken wire or bird netting. 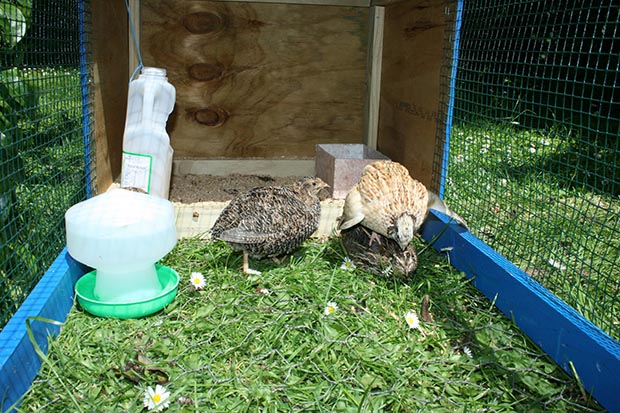 Japanese quail are much smaller than bantams and just the right size for a cat to catch and eat so covering their pen protects them from predators too.

The small moveable pen we built for our quartet of quails is 1.2 metres long, 400mm high and 500mm wide. At one end of the pen, a 400mm deep area is enclosed on five sides using plywood, a lightweight material that is well suited for such a purpose. We chose to use treated plywood that had been airing out for several months, and for the rails we used 20mm by 50mm lengths of treated planed timber. Chicken wire (10mm) was used to cover the remainder of the pen, except for the floor area which we covered with 50mm chicken wire so that the quail could eat the grass without being able to escape when the pen is moved. 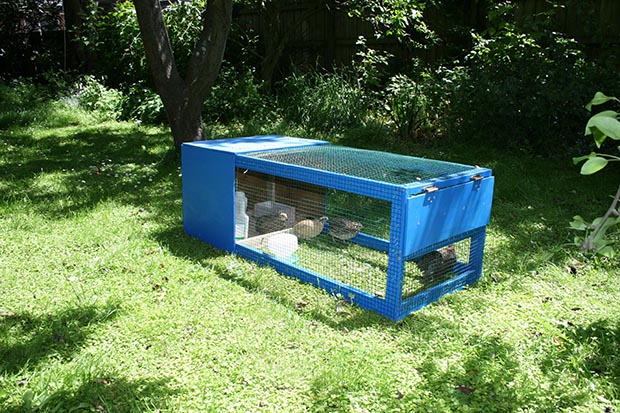 The same water dispenser that we used for the newly-hatched quail chicks is also ideal for fully-grown quail. We use an empty milk bottle with a large hole cut into one side, held in place by a string that is tied to the top of the pen, as a food container.

BREEDING JAPANESE QUAIL
Many people who would like to breed some useful birds in town don’t have room for larger breeds of poultry. That’s not a problem with quail.

Better yet, I have to admit that our quails had already produced some chicks before I noticed the male’s crow for the first time, that’s how discreet these birds are, they hardly make any noise at all. 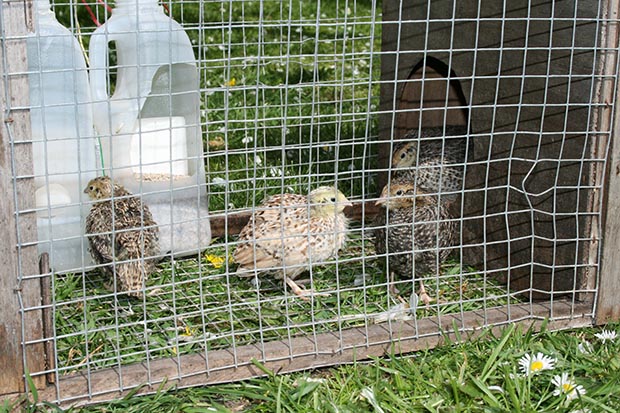 All quails can and will fly so it is imperative that their pen is covered.

Although we provided small nests lined with wood shavings and straw, our quail hens preferred to lay their eggs beside their nesting boxes. None of the three females went broody during the whole laying season. Fortunately, we have a forced air incubator where we were able to incubate quail eggs alongside our fertile chicken eggs. In a still-air incubator the temperature needs to be adjusted for the quail eggs as their centre is much further away from the heat source than a chicken egg’s centre.

The male quail is very active and can be observed mating with his girls many times per day, holding the female by the feathers on the back of her head. However, this doesn’t mean that all the eggs are fertile: our male had just three females in his ‘harem’, yet almost a third of the eggs were infertile, in line with the eggs we initially purchased. 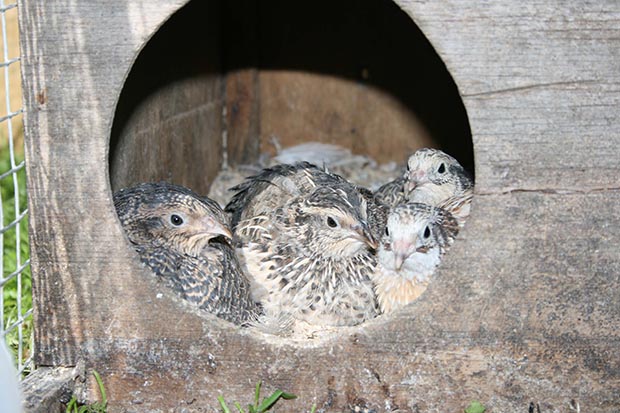 The male quail and his ‘harem’ of females.

Male quails are very territorial so one male per breeding pen is recommended. We also found that in a small pen, unless there are hiding places, it is almost impossible to introduce additional birds.

BUSINESS OPPORTUNITY
Although we never offered Japanese Quail to anyone, we were asked for chicks or young birds by several people who were very keen to get their own productive easy-care pets.

Only the limited space in our small incubator prevented us from hatching each and every egg our quails laid to satisfy demand for young birds. 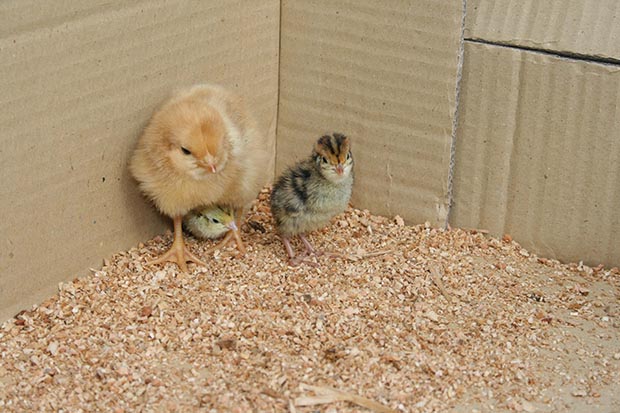 The size difference of a domestic hen chick vs. a Japanese Quail chick.

While there are large quail farms that supply the restaurant trade and a few breeders who sell fertile eggs to the general public, there seems to be no-one (yet) who sells quail chicks or breeding groups to people who would like to have their very own designer egg layers for their backyard.

Considering how productive Japanese Quail are, and how short the ‘turn-around’ period is, there is almost certainly the opportunity for a few enterprising lifestyle block owners to supply quail eggs and young quails to the local market, and provide an entry level poultry breeding experience to city dwellers.

■ Females start to lay 6-7 weeks after hatching.
■ Their decorative eggs fetch a high price in relation to the production costs due to their novelty value. People just like to ‘show off’ using quail eggs when entertaining.
■ Quail lay an egg almost every day as long as they get at least 14 hours – ideally 16 hours – of daylight (which can be supplemented with a light bulb if you want year-round good laying).
■ Both males and females can be eaten and are known as a delicacy.
■ Due to their small size they need little space.
■ They provide an as-yet untapped opportunity to be marketed to lifestyle block owners and city dwellers as easy care suppliers of fancy eggs (and meat).

You can also check out Trade Me for different breeders, or contact your local poultry & pigeon club.