Behind Appleby Farms: Meet the Nelson neighbours who are churning out tummy-friendly ice cream Two Nelson farmers are keeping things local, churning their A2 milk into ice cream produced just minutes down the road from their milking sheds.

Few dairy farmers can trace their product from pasture to plate. The last most see of their milk is a filled tanker rolling off into the distance. It’s different for Nelson’s Murray King and Julian Raine. They know precisely where their dairy is ending up — the proof is in the pudding, and it’s kept in their freezers.

Neighbours for years, Murray and Julian are third- and fourth-generation farmers making a name for themselves on Aotearoa’s ice cream scene. They’re dealing with their dairy slightly differently to their forefathers, producing tummy-friendly milk that’s collected and churned into their brand, Appleby Farms. “It’s been a journey, and it started with converting our herds to produce A2 milk,” Julian says. The farming pair had been brainstorming for some time about what could make their milk more appealing to buyers locally and overseas and eventually landed on A2.

“It’s all about a cow’s genetics; depending on them, they’ll produce milk that contains either A1 or A2 proteins, or a combo of both.” There’s a bit of science to it, but in a nutshell, people who have previously been sensitive to A1 protein seem to be able to enjoy A2 milk without any side effects. It took nearly a decade of knuckling down and a decent investment of cash to convert their herds.

Then came the question of what to do with their A2 liquid gold. “We had been looking at a lot of different things. Cheese came up, but ice cream just seemed the natural thing to do,” Murray says. “The real catalyst is that we like ice cream, and we figured, ‘Who doesn’t?” 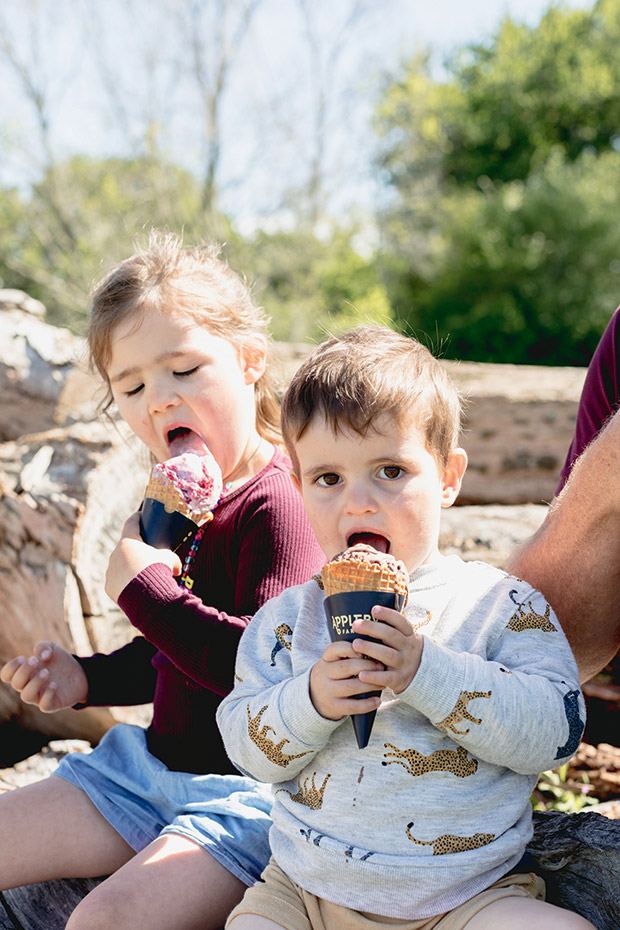 Julian Raine’s grandkids, Millie and Mack Hamilton tuck into a treat on the Raine farm.

A valid point: at 23 litres per capita per annum, New Zealanders are the biggest consumers in the world. The farmers partnered with food technologist Kristy Giles (a long-time friend of Murray’s), who brought with her nine years’ experience as an ice-cream maker at Tip Top.

The trio hatched a plan to build a factory in Stoke and start churning their flavours. Kristy kicked things into gear in 2017, importing the all-important equipment from Europe to Nelson.

In the space of just nine months, the factory was erected, great steel paddles were mixing away, and the first batches of premium vanilla ice cream were on the table. Murray’s farm in Appleby, 15 minutes down the road, supplied the milk for the ice cream (and the name); the cream was collected from Julian’s farm. “It’s a bit Willy Wonka opening and running an ice-cream factory, but it went pretty smoothly,” Kristy says. 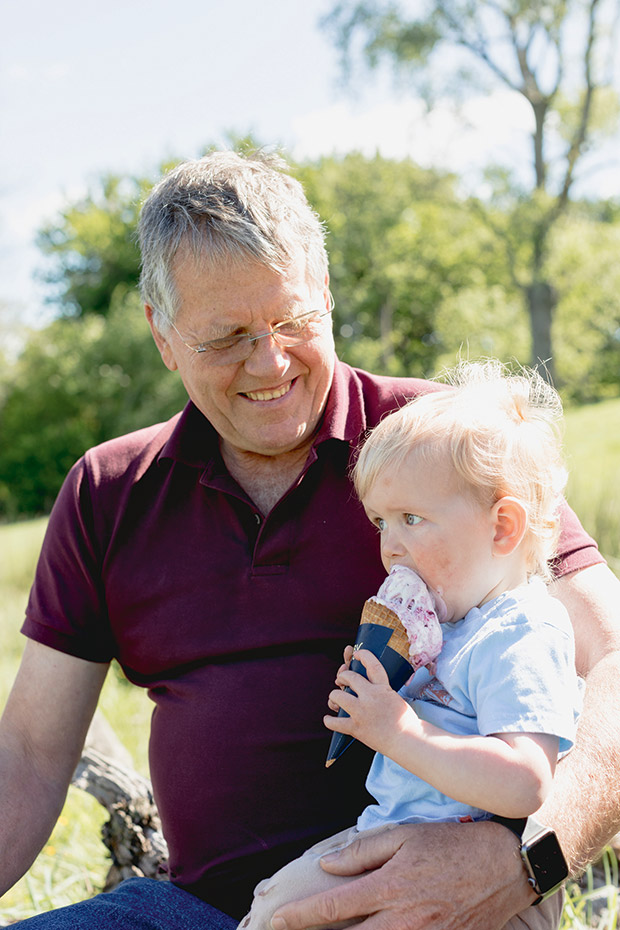 Austin Raine is a keen taster of his grandad’s product.

They were well aware they were a small corporation in comparison with the big guys, such as multinational Ben & Jerry’s, which opened a Nelson store shortly after Appleby Farms’ launch. Julian says that was a challenge, as both brands are aimed at a similar market.

“I suppose we’ve learned that it’s tough out there. We have some loyal customers, but it’s hard to get them.” Murray adds that although the timing of Ben & Jerry’s launch was frustrating, they knew their local blend was superior in quality.

And Appleby Farms’ comparatively small size and province-rooted story resonated with the public. At launch in summer 2017, Nelsonians eagerly slurped away at Appleby scoops, buying cones from a silver retro Airstream caravan parked up beside Tāhunanui Beach, and at cricket matches, fairs and half-marathons (where runners could dig into a sauvignon blanc sorbet made especially for the occasion). Just name it, and the caravan was there. 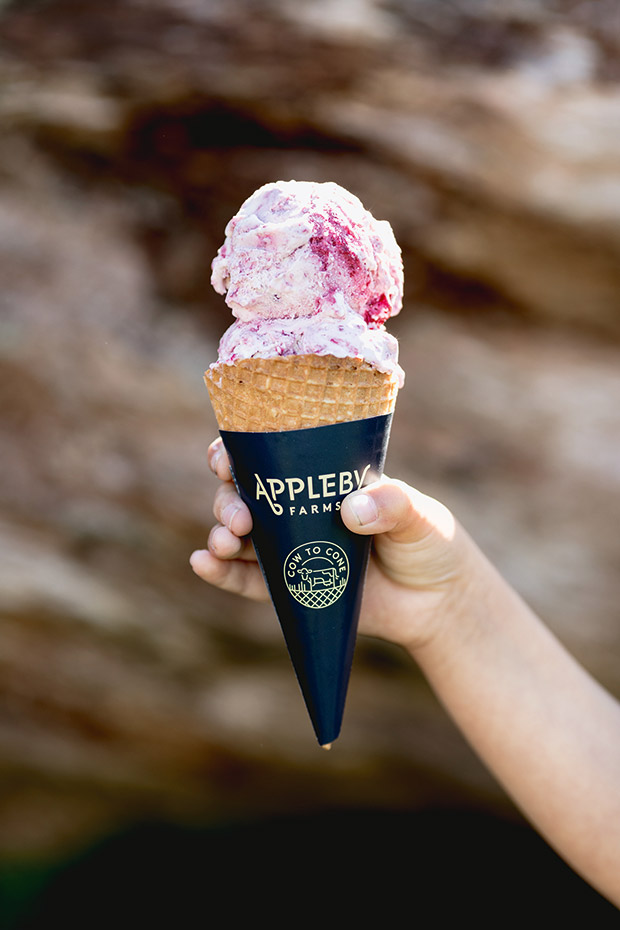 By March the following year, the product was in supermarkets — a challenge, Murray says. “There’s no shortage of ice-cream brands out there, so our point of difference being A2 was important to push.” The range is stocked now in more than 175 supermarkets and cafés in Aotearoa, with a further 180 stockists in Australia, and 36 in Singapore.

Murray and Julian call Kristy an ice-cream alchemist. She’s behind Appleby Farms’ seven retail flavours, which began with a classic Vanilla Bean and Chocolate Brownie. The tasting process is a much-needed (and understandably, much-loved) part of the job.

“We all stand around with our spoons and dig into different variants and go, ‘Ooh, I like that one,’” Julian says. Other local goodies are also thrown in the mix — boysenberries from Julian’s farm and locally baked brownies. Appleby Farms’ own “Willy Wonka”, Kristy Giles, who developed the ice-cream factory and is the brains behind the brand’s flavours.

Nelson has provided that critical ingredient for the farmers’ cows to thrive and produce silky-smooth A2 dairy: sunshine. They’re pampered cows, too. Julian’s herd is fed predominantly on green grass, with leftover kiwifruit and boysenberry pulp thrown in the mix. He has even installed a robotic back-scratcher in the field for his “girls”.

More stories you might like:
Award-winning Gisborne fishery East Rock looks to the future with transparent and sustainable practices

“It’s kind of like a big yard broom that spins when they nudge up against it. They thought it was bizarre at first but, eventually, they came up to give it a go.” Murray’s most recent farm addition are dung beetles, which help aerate the soil and promote less run-off into waterways. Julian with his “girls”.

Given people’s growing desire to know what’s in their food and where it’s come from, the farmers say the popularity of Appleby Farms makes sense. “We call it ‘cow to cone’.

It’s a vertically integrated business from out in the pastures through to the cone, and we don’t know of any farmers doing anything similar here,” Julian says. “We’ve been on the same piece of land for 175 years now. We think what we’re practising is pretty sustainable and should be for future generations.”

Their scoops are winners on a national scale. First-timers in the New Zealand Ice Cream Awards in 2018, they were rewarded with four of their flavours winning medals; they even scooped up the premium vanilla competition to win best in category.

More recently, their Boysenberry and Ginger Biscuit flavours scored gold in the premium category for 2020; Passionfruit, Coffee and Salted Caramel each won silver. It was solid confirmation they are churning out the good stuff, Murray says. 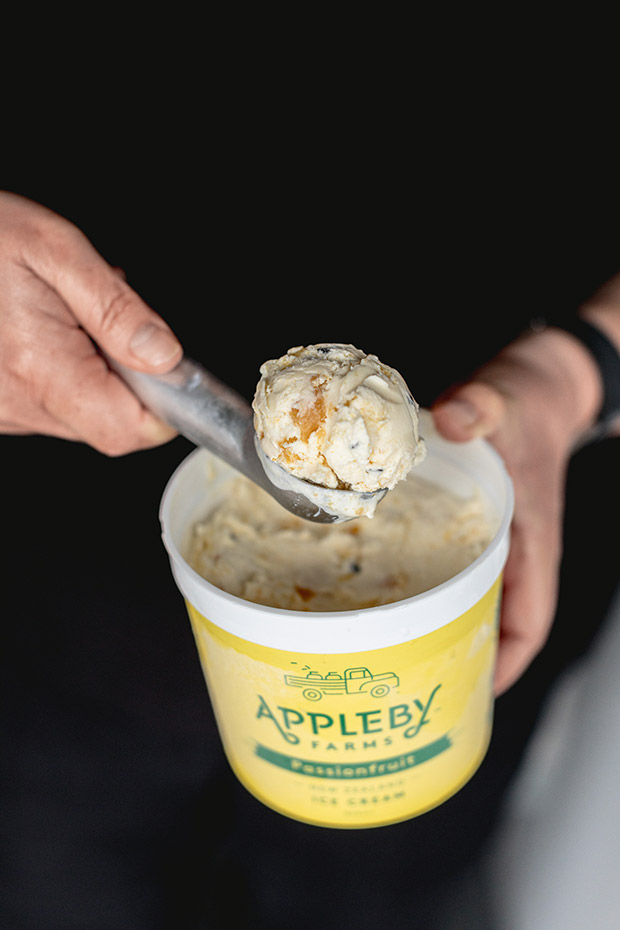 The company has big ambitions. “Our mission has always been to be a branded export company. We know that New Zealand is making some of the best ice cream in the world. People come, and they can’t believe how creamy and rich it is. So why wouldn’t we want to share that with the world?”

This summer will be busy for Appleby Farms. The Airstream will be in Nelson (with Kristy and Murray’s kids often at the frontline, wielding the scoopers), an ice-cream truck will be parked in Mount Maunganui, and stock is on its way to Auckland’s Britomart. And there will undoubtedly be more flavours to test. “You’re only limited by your imagination for that,” Murray says. And there’s no shortage of volunteers for a taster’s job. Preheat oven to 180°C and place oven rack in middle position and line a baking tray with baking paper.

Beat butter with an electric beater, then add sugar and combine. Add condensed milk and vanilla and beat until mixture is light and fluffy. Sift flour and baking powder together. Mix sifted dry ingredients and chocolate chips into the creamed mixture.

Roll spoonfuls of mixture into balls. Place on baking paper-covered tray and flatten with a floured fork. Bake for 15 minutes. Cool on wire rack. Serve with any flavour of ice-cream. Heat oven to 160°C. Butter a 3½- to 4-cup capacity ovenproof dish and sit inside a deep roasting tin. Boil the kettle.

Beat butter and sugar until combined. Add the egg yolks and beat 2 to 3 minutes. Fold in lemon zest. Sift in flour and baking powder, pour in milk and fold until just combined. Fold in lemon juice.

Whisk egg whites until they form soft peaks then fold one tablespoonful into the lemon mixture to loosen. Add remaining egg whites and gently fold in. Place mixture in prepared dish. Pour hot/boiling water into roasting tin until it comes about three-quarters the way up the sides of the ovenproof dish.

Carefully place in oven and bake for 35 to 40 minutes until puffed and golden brown. (Try not to over-bake as this will result in no luscious lemon curd/custard in the base of the pudding.) Serve with Appleby Farms Vanilla Bean Ice Cream.