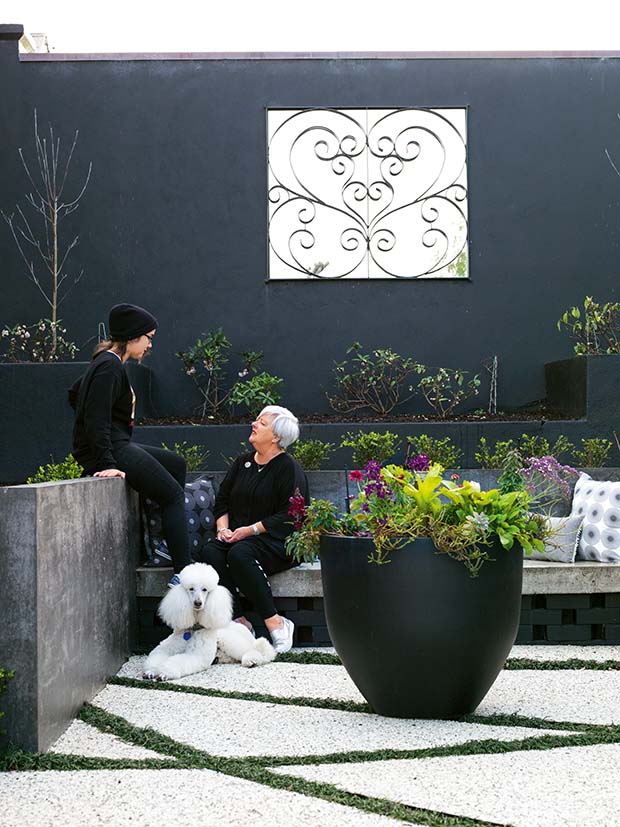 By February, the urn in Marg Wood’s front garden will be brimming with bright blooms in time for the Heroic Garden Festival. The family’s colourful rescue animals will be on their best behaviour for the Auckland garden tour, including Saffie the poodle who failed her guide-dog training due to a love of cats.

A colourful Auckland family with a motley crew of animals are opening their garden gate for the Heroic Garden Festival.

When Marg Wood lived in the east Auckland township of Beachlands 30 years ago, her neighbours referred to her as the “mad trolley dolly”. There was the time she called the fire brigade because she ran out of water while dyeing her hair (the firefighters kindly poured some water into the tank so she could rinse out the colour). 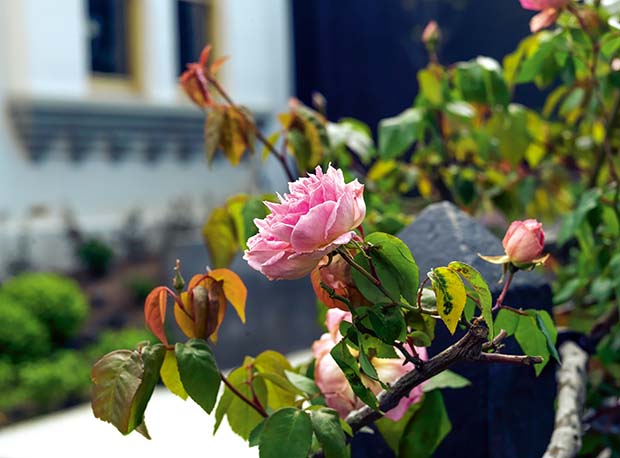 Then there was her strange behaviour with the septic tank. She had bought her first home in the coastal township at age 26 while working at Air New Zealand, starting her career when people dressed up for flights, and cabin crew were called air hostesses and wore big false eyelashes and bright blue eyeshadow.

She hadn’t dared to question the mischievous builder who instructed her to agitate the sewage in her backyard septic tank with a stick once a month. Several years later the rogue ’fessed up to his trickery.

“I was the local joke; I had been stirring my own shit for seven years, seven whole years and no one told me. But I was 26 and had bought my own house and never had a septic tank before so, of course, I didn’t know any better.” 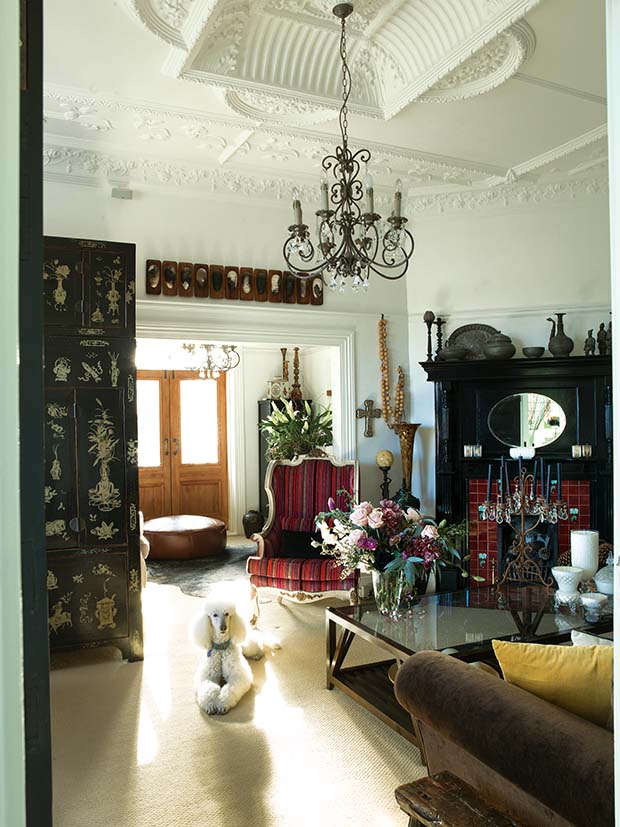 Ornate ceilings such as Marg’s are uncommon in villas from 1910. The chair, made of horse hair, is a recovered French antique from Yvonne Sanders’ Epsom showroom; one of Marg’s interior must-haves is fresh flowers. “I don’t have a cleaner, so I use the money I save on cleaning to have fresh flowers.”

But, then, larger-than-life Marg has a knack for causing a bit of a stir. She hadn’t intended on moving into her current home in Mt Eden in 1994, as she and husband Michael were working on a five-year plan to renovate a place in Balmoral. An agent accosted her in her driveway one morning, and they had an offer to buy their home
by evening.

“I had only finished renovating the kitchen two weeks before. Suddenly we needed to find a new home in three weeks. We saw our current home on Wednesday and had bought it on Friday. I couldn’t even remember the layout of the house, but I knew it had a good feeling.”

Michael had the shock of his life when he came home to discover a digger in his front garden a year ago. What was supposed to be a “small garden change” had escalated into a year-long project with major earthworks. Last year their garden was a fan-favourite of the Heroic Garden Festival, although a one-winged rescue chicken called Rhonda led visitors down the garden path – unscripted – and stole attention from the gorgeous daphne and hydrangea plumage. 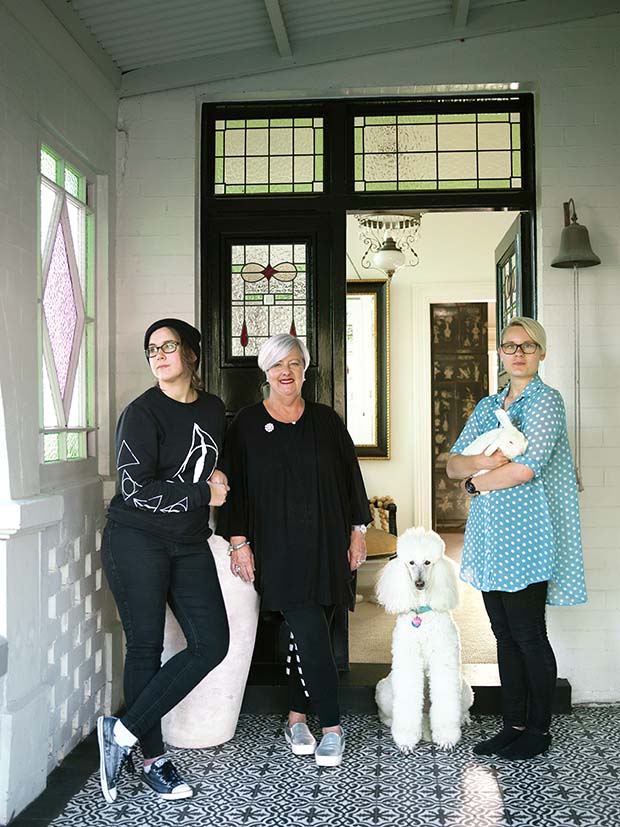 Maddie, Marg, Saffie and Dasha (holding Bunny the rabbit). All three women have a love of animals, but Maddie rules the roost when it comes to caring for the birds; Marg kept the original 1910 gate to her Mt Eden home but changed the angle of the original entranceway when redesigning the garden with landscape design company Second Nature, “who were incredible”.

The Heroic Garden Festival raises funds for Mercy Hospice and is important to Marg. One of her best friends, who died of cancer, had spent her last days at the Mt Eden hospice. “A lot of people do the garden tour because someone in their family has a connection with the hospice, and it’s lovely to talk to other people who have been through a similar experience. It sounds morbid, but it’s actually very beautiful.”

Her own mother was diagnosed with cancer when Marg was 19, and she and her sister were told she wouldn’t survive. “I remember quite selfishly thinking, ‘I’m not ready for my mum to die.’ When you’re young, you sometimes don’t realize how important family is until you nearly lose it.” She did her best to look after her mum, but – when it came to feeding her – all Marg knew how to make was porridge. “I think my mum hated my porridge more than the chemotherapy, which was horrendous month-long courses in those days. But she is 92 now, and I think it was my porridge that saved her.” 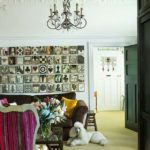 Marg has collected more than 50 tiles by Canadian artist Sid Dickens over the years. She has another row to add. The busts in the hallway were bought on a family trip to Malawi. 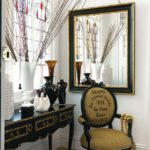 A Crown Lynn swan within earshot of the aviary outside. 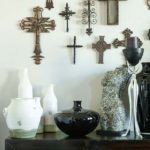 Marg has been collecting crosses for several years. “I can’t help but collect things, I’ve picked up the crosses from all over.” 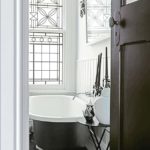 Tapa-design leadlight windows were designed by Suzanne Hanly of The Glassworks. 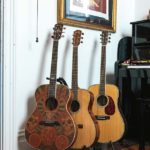 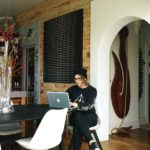 Maddie is just about to graduate from university with a BA but is considering studying science as well. 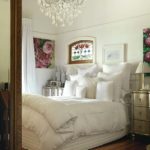 The flower artwork in Marg’s bedroom is by Mt Eden artist Rosemary Eagle, who is also a member of Marg’s book club.

More stories you might like:
Is your chicken gasping for air? It could mean it has gapeworms

Marg and Michael’s daughters Maddie and Dasha are both adopted. Maddie was adopted in New Zealand when she was a baby while Dasha came, aged five, from an orphanage five hours’ drive from St Petersburg in Russia. At the orphanage, Dasha shared a bedroom with 25 other children and her only worldly possession was a cross tied to a piece of jute. When she arrived in New Zealand and opened the door to her bright and colourful bedroom for the first time, she stood still and shook. 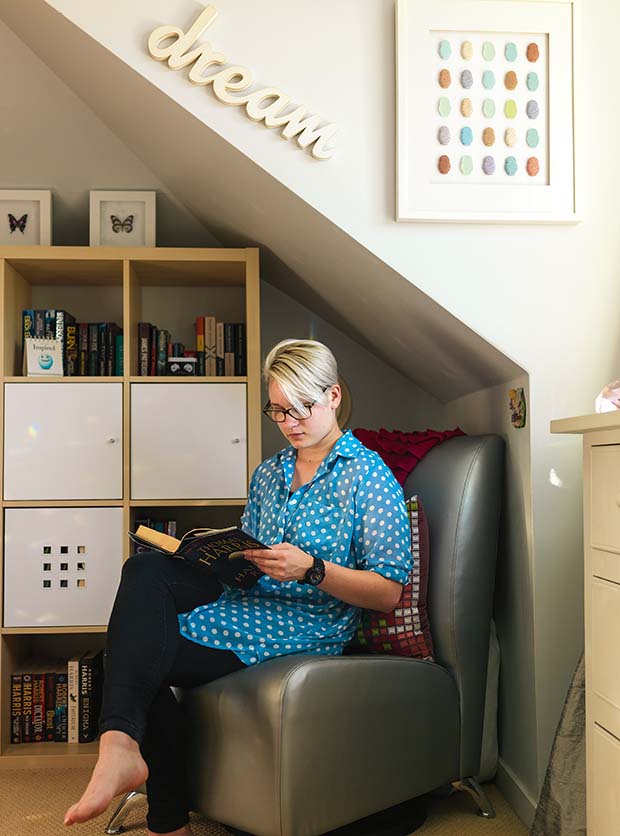 Spacial design student Dasha has decorated her room in the style of a New York loft.

“It was such a magical moment and she never wanted to leave that room,” says Marg.
Dasha, now 20, has picked up her mum’s artistic flair and is studying spatial design at AUT. She and Maddie have begged their parents to never move house, and they won’t says Marg. It’s a fun, “lived-in” villa; the artwork and pieces of furniture collected on various trips around New Zealand as well as on overseas family adventures in Malawi, Zambia and Laos.

Marg’s decoration efforts sometimes have ruffled feathers. Michael swears the cushions multiply at night, and there were stern words when she asked him to hang 50-plus Sid Dickens wall tiles in one go (she doesn’t have the heart to tell him she now wants him to hang another 10). 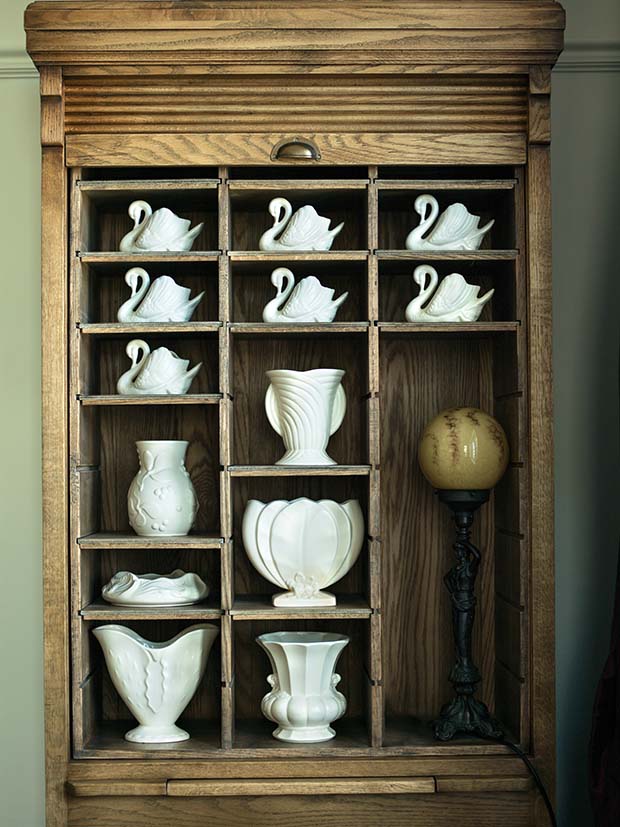 Just one of Marg’s collections of Crown Lynn ceramics – she has other pieces stowed away all over the house. “I love them, but I’m not precious about them. Dasha called me the other day upset because she broke a swan, but I told her not to worry about it.”

Marg is a collector; Crown Lynn, crosses and glassware are her weakness, and her daughters have picked up the collecting bug, although their soft spot is animals. The Woods’ pets include Saffie, a poodle that failed guide-dog training due to “cat distraction”; Dasha’s pet cat Kushka who is terrified of the word “vet”; three hens – Nellie, Rhonda and Penny – who are each missing various appendages; Dasha’s bunny, named Bunny, an escapologist who likes the veggie patch; and an aviary of re-homed birds, which is Maddie’s pride and joy. 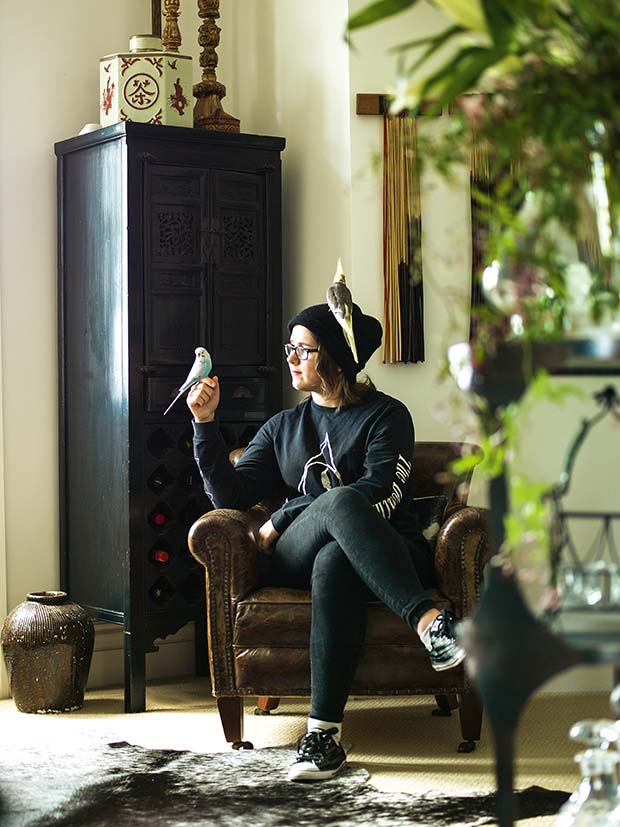 Maddie’s soft spot for birds extends to Peter the cockatiel, who was expelled from a rest home for making too much noise.

One cockatiel, Peter, once belonged to Marg’s mum, but he was expelled from her rest home because he kept imitating a ringing telephone and confusing the nurses. Many other birds in the aviary were re-homed through Maddie’s connections in the Auckland Metro Bird Club.

Maddie (23) is notorious for going to great lengths to save a stray. For an entire semester, her sociology lecturer was confused by the chirping noise in his classroom, only to discover the sound wasn’t a tweet from the Twittersphere but rather the two baby birds his student had been keeping warm stowed in her bra. 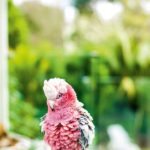 Jerry, the rescue galah, wounded his tail when he was younger, but fluffs up his feathers to compensate 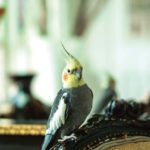 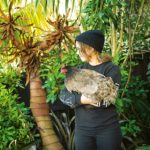 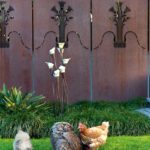 Chooks Penny, Nellie and Rhonda roam the garden in front of a laser-cut steel artwork Marg designed. Though the flower is a south-east Asian lotus, it also reminds Marg of a nettle and of her parents’ Scottish heritage.

But a baby possum, “rescued” while on a family holiday in Northland a few years ago, was the last straw. Michael and Marg were less than impressed when they discovered the harboured marsupial, whose crimes include kiwi-egg munching and native-tree gobbling. The possum was deposited at the home of a person who worked to promote possum rescue organizations in Australia. The family myth is the marsupial went on to become a poster child for a possum television campaign across the ditch.

While Maddie has a knack for saving animals, Marg can bring forgotten objects back to life. She is often found rummaging in Mercy Hospice charity shops for trifle bowls and cut glassware. Not because she’s a particular fan of the tipsy pud, but because she and her friend Sharon Felton share a passion to transform the old crystal into beautiful soy candles, which they sell at the Waiheke market. 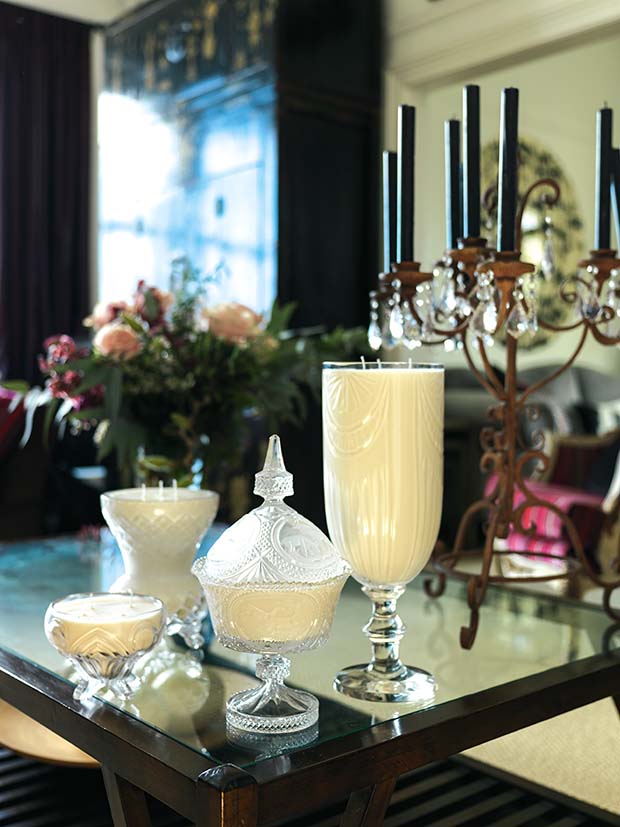 “I love the idea of putting the love into old things and recycling,” says Marg. Customers select essential fragrance oils, and some even choose classic perfumes. “I sometimes wonder if there’s a story there – perhaps their chosen scent was a perfume worn by a family member that is gone. “Whether it’s gardening or a candle, I think it’s human nature to find a connection to those who’ve passed away.” 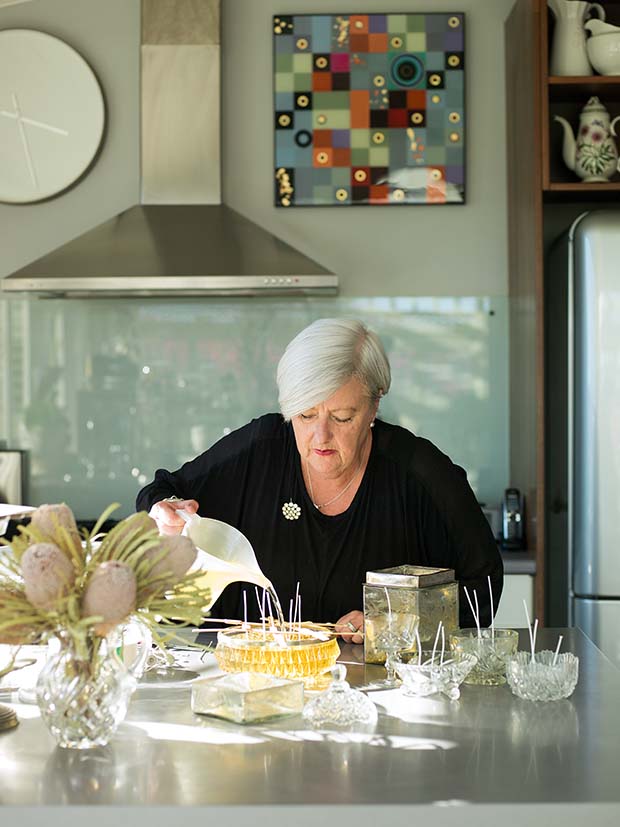 Marg pours her soy wax into vintage crystal ready for selling at the Waiheke market. She lights the clean-burning candles in her own home every night. The conservatory at the back of the house is a favourite family haunt, used in summer and winter thanks to the outdoor fireplace built by Marg’s late father using the recycled bricks from a neighbour’s garage. The 1910 house is one of seven identical masonry houses in Mt Eden called the Seven Sisters, built by an Australian architect. The ornate ceilings and architraves weren’t popular in Mt Eden, then a working-class suburb, and there are only seven of their kind

HOLDING OUT FOR A HERO 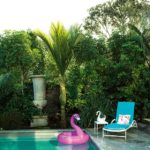 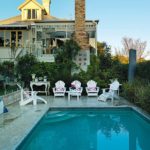 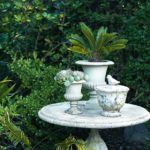 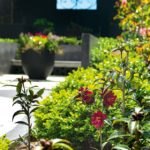 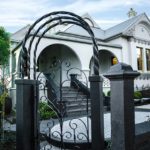 By February, in time for the Heroic Garden Festival, the urn in the Wood’s front garden will be overflowing with pink mandevilla and the garden beds blooming with pink daphne and green/white hydrangeas. Gardening feeds the soul, says Marg, who gets her green fingers from her Scottish grandmother who had a beautiful garden on the Isle of Lewis in the Outer Hebrides.
“There’s something therapeutic about gardening, and it’s lovely meeting other people who also want to talk about it. One woman sat on the deck with a cup of coffee and said, ‘I’m not leaving, this is paradise,’ and you know what, that’s fine by me.”

Marg grew many of the original plants in the front garden from cuttings, but last year she used landscaping company Second Nature for a major redesign to modernize the entranceway and retain the house’s 1910 heritage features. The crisscrossing mondo grass pattern mimics the ornate archways inside the house. The garden of the neighbouring house, owned by Sara Noble and David Kirkpatrick, is also opened for the festival, which raises money for Mercy Hospice in Auckland.
Heroic Garden Festival, 9–11 February 2018. Tickets at: heroicgardens.org.nz