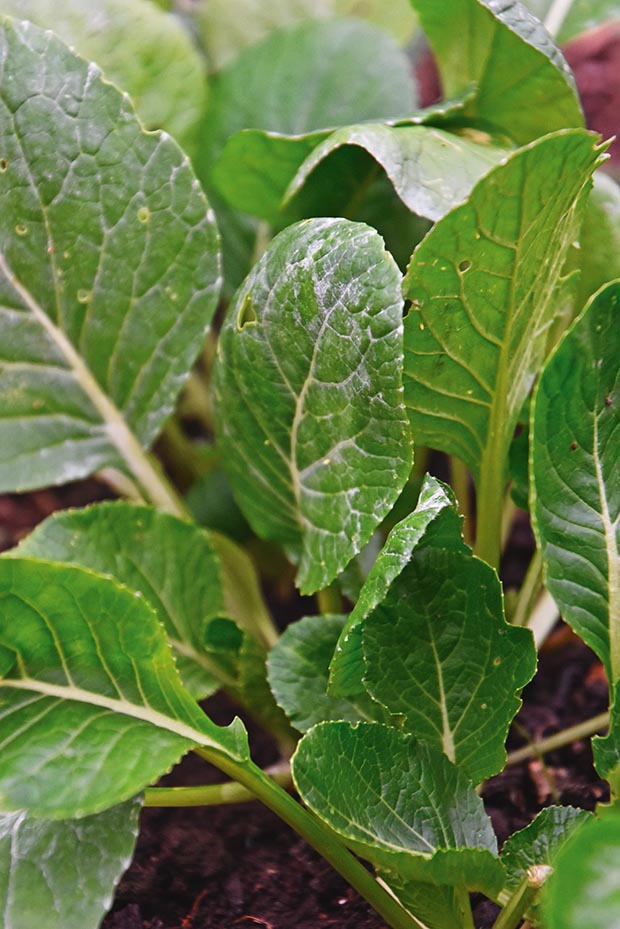 This is one of the most under-rated greens and a great staple vege to get you through winter.

I like trying new things in my vege garden, but despite a careful perusal of the Kings Seeds catalogue, I missed komatsuna.

Joy Larkcom, writer and the queen of British vegetable growing, felt komatsuna deserved the award for most under-rated vegetable and that’s when I went hunting. A Google search backed up her enthusiasm, with many gardeners calling it their favourite winter green.

One writer said komatsuna (Brassica rapa var. pervidis or B. rapa var komatsuna) was ‘tough, impervious to the effects of all but the worst of weather and an ideal crop for cold climates.’ Other accounts spoke of it happily surviving -12°C or worse, and someone else spoke of a ‘tender, melting, bright-green sweet mustardy treat.’

Komatsuna is rated by its fans above other Oriental brassicas such as mizuna and bok choi in tenderness, mildness, and versatility, and it’s less likely to bolt in spring and autumn. 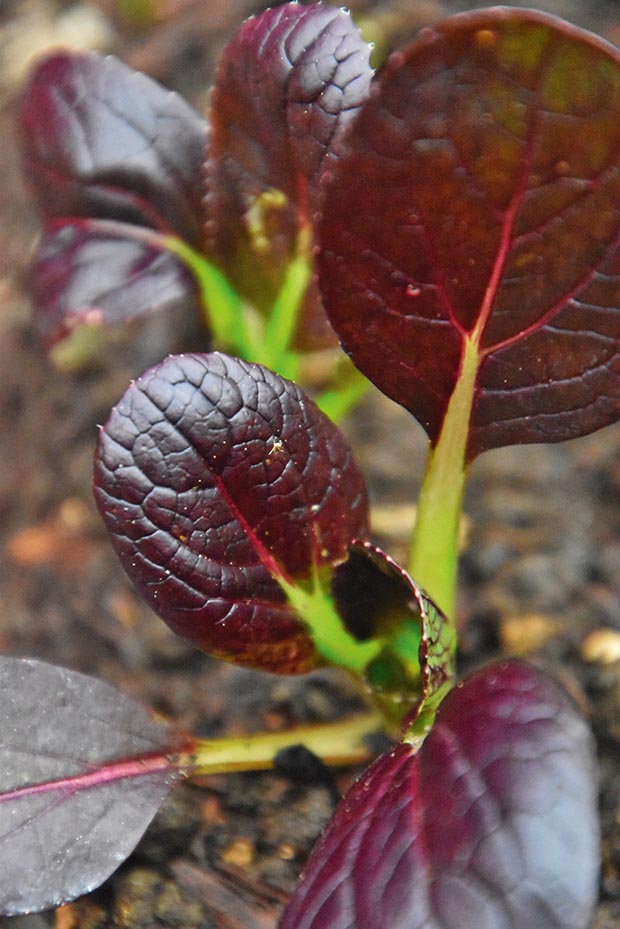 It seemed a good match for the notorious cross-seasonal temperature fluctuations of our mid-Canterbury climate, not to mention the winter blitzes of sleet and snow. In March I bit the bullet and paid the extra freight for a second seed order, topping it up with a few unintended tasty treats. At that time the growing season was fast evaporating so I sowed them as soon as they arrived. As so often happens with this sort of spontaneous gardening, this was the same time the cold weather arrived.

I need not have worried. My brave little komatsuna seedlings burst through the ground undeterred, their shiny, bright green leaves bouncing through the first frosts without missing a beat. The growth soon outstripped the neighbouring spinach plants and I looked forward to my first komatsuna feast.

Alas, I was too eager, too soon. The cabbage white butterflies took a great deal of interest in the newcomer, preferring them to the mustard plants nearby. At lightning speed, my healthy komatsuna became holey komatsuna, necessitating a couple of doses of derris dust. 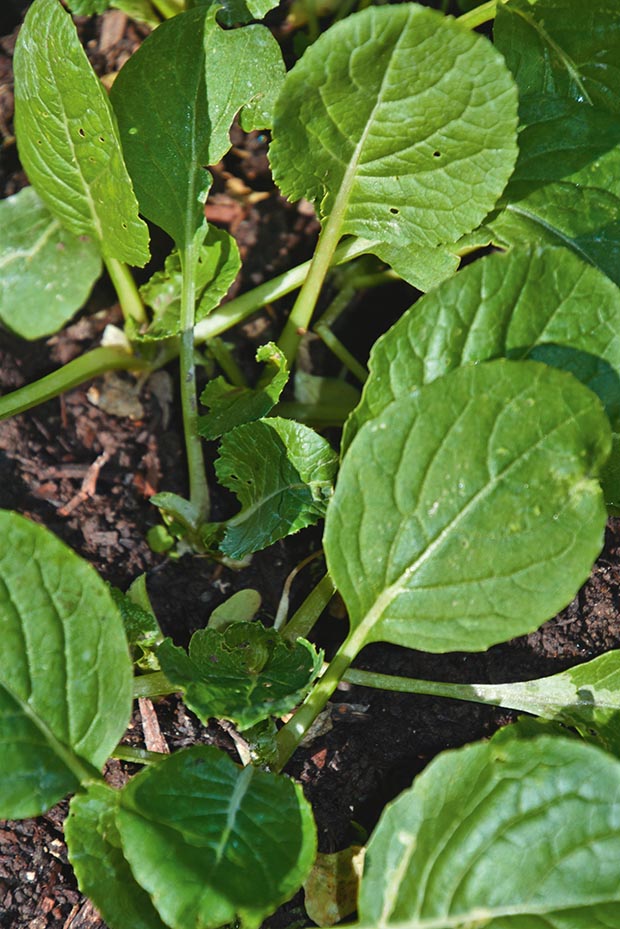 My tender komatsuna plants were loved by caterpillars!

After the caterpillar episode, things improved. About six weeks after sowing and a few light frosts later, the foliage started to harden up, but not so much that I couldn’t still nibble young leaves straight off the plants. The taste was very mild, with a slight bite, but much less than rocket or mustard.

As plants mature, the leaves develop more of a ‘kick’, getting hotter and the stems develop a crunch and stringiness. Some say frosts sweeten the taste.

The Americans call komatsuna ‘mustard spinach’. The flavour has been variously described as a mustard-spinach cross, or mild-mustard cabbage. But komatsuna is neither a spinach or a mustard, though it is a member of the brassica family. It is high in calcium, vitamins A and C, and contains more iron than spinach. 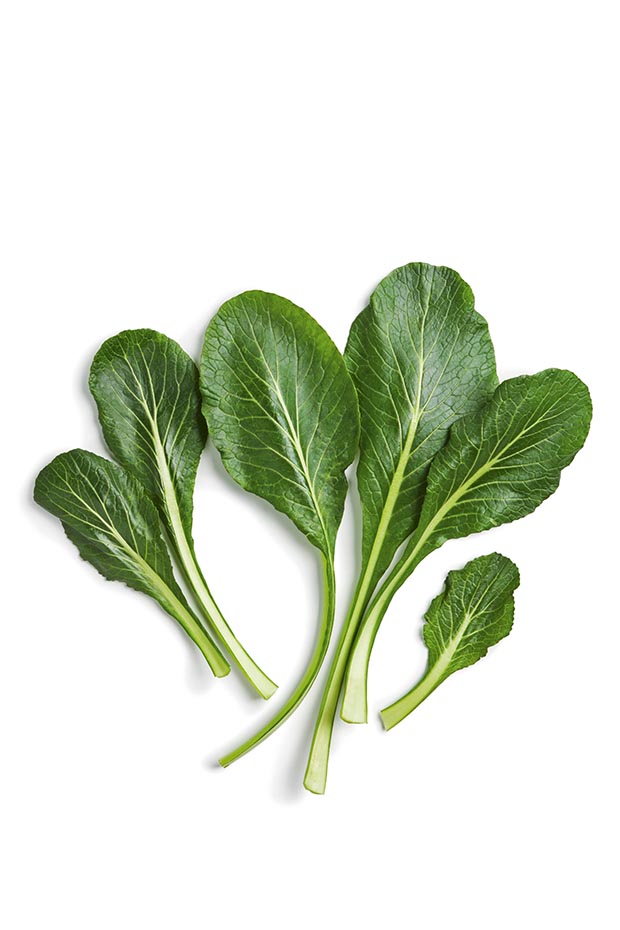 Komatsuna grows quickly, like its mustard cousins, and it was soon clear I would need continuous sowings to have young plants to harvest through winter. Leaves can be harvested at any stage from baby leaves up to mature leaves that may be a foot or more long. When left to grow to maturity, most varieties will reach 30-45cm, and go higher if left to flower. The variety I bought doesn’t give a height and it hasn’t got to this yet, but at the rate we are going eating it, it’s unlikely to ever get near its mature height.

We’re now all komatsuna converts. The cook came up with a stunning dish which was demolished by all, and our son – who is a Japanese food fan – then asked for more, a rare event.

This is a vegetable that’s a little out of left field but worth a try. If you find cabbage overdone and mustards a little on the hot side, then komatsuna could be the perfect winter vegetable for you. 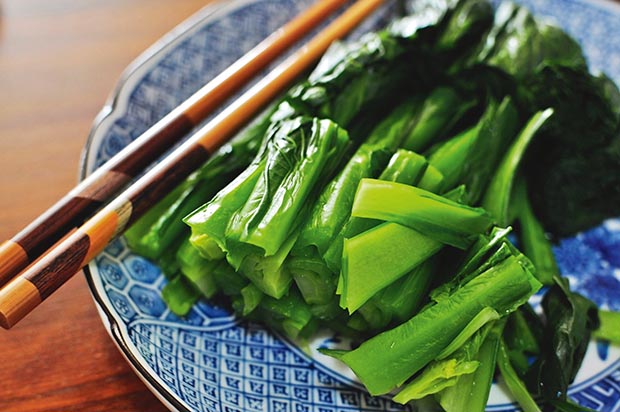 • The young greens are eaten raw, when they’re mild and crunchy, making them a healthy and tasty addition to salads.

• Mature komatsuna is best cooked using the same methods as Oriental greens – steamed or boiled lightly, stir-fried – combined with other greens, or used in soups.

• Most recipes suggest blanching or par boiling before adding to stir-fries.

• The Japanese, who with their centuries of experience have probably nailed it, cook it to a minimum either by steaming, or in a minimum of water. Excess water is squeezed out (or you can use a salad spinner) and it is flavoured with sesame seeds, soy sauce and sometimes a squeeze of citrus fruit.

THE HISTORY OF KOMATSUNA 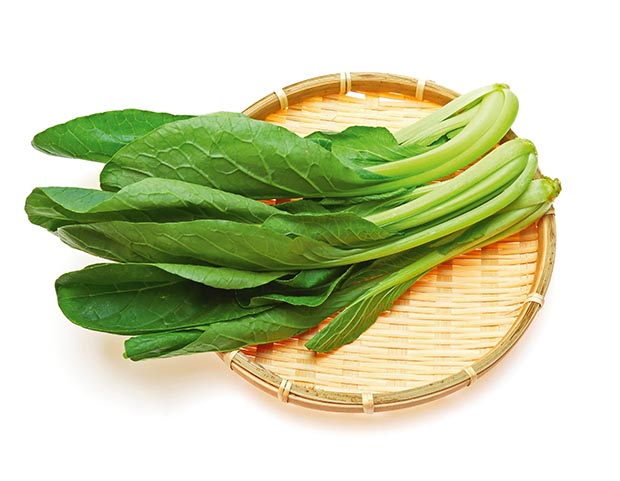 Komatsuna has been grown in Japan since the 18th century. It gets its name from the area in present-day Tokyo near the Komatsu-gawa River.

It’s part of an extended family group and plant breeders in Japan have developed an array of varieties by crossing with closely related vegetables including pak choi, rosette pak choi, Chinese cabbage and leaf turnip.

For example, a cross of komatsuna with tatsoi produced misome; a cross with cabbage produced sensopai.

Komatsuna today is grown mainly in Japan, Taiwan and Korea, but hardly at all in China.

HOW TO GROW KOMATSUNA 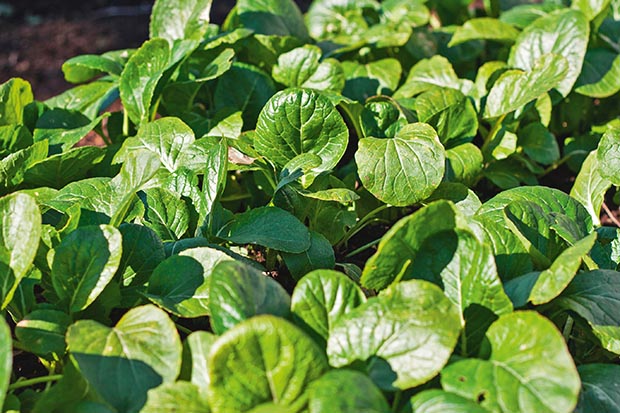 If you want to try komatsuna you will probably need to grow your own as it is not common on market shelves.

Seeds seem uncommon too – I only found two varieties available through Kings Seeds: a green komatsuna called Mustard Spinach and a red variety, Komatsuna Red Leaf F1. The red variety was developed for baby leaf production, and mine were low growing and less vigorous than the green variety.

Komatsuna, like other fast-growing brassicas, needs high levels of nitrogen and water to crop well. An open site is preferred and soil should be fertile and moisture-retentive. Work in plenty of organic matter and cover with mulch, preferably organic, to conserve moisture.

If plants seem less vigorous than expected, a seaweed liquid feed will boost growth. About a month after planting is a key time for supplementary feeding.

WHEN TO SOW
In temperate climates, komatsuna can be cropped most of the year, and you can sow it outdoors from early spring to autumn.

Very late sowings can be made indoors and may be worth continuing under cover in very cold climates to produce a better quality green.

For baby leaf production
Sow thickly at 5-10cm apart. Leaves can be harvested from 8cm high (20-35 days depending on the season) – leave about 2cm above ground so leaves re-sprout. At least two crops should be possible before resowing.

For mature plant harvest
Space plants about 15-30cm apart. Plants can be harvested whole or individual leaves taken as required and used rather like cabbage. Spring sown crops need to be harvested before bolting.