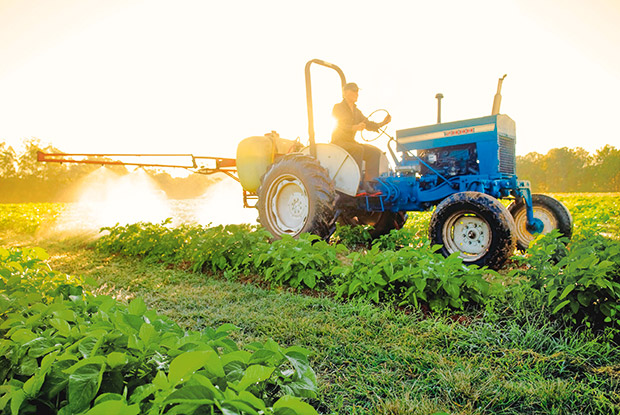 Very few things in life are free, but a wonderful garden resource is lying around, going to waste, and it will only cost you a trip to the beach.

Seaweed has many uses. It was once considered a medicine. Lady Mary Ann Martin wrote in Our Māoris (1884): “For swelled joints, we applied poultices of seaweed.”

But seaweed is also a good food. Traditionally, Māori steamed or roasted it, used it in soups, or ate it raw. It’s also used as fodder for livestock and to make fertiliser. Seaweed ‘manure’ has been applied to soils to improve quality and promote plant growth for thousands of years.

The Scots came up with a clever system of parallel ridges and trenches to grow potatoes that they call ‘lazy bed cultivation’. They dig trenches, layer seaweed on the ridges, and leave it to rot for several weeks. It’s then covered with loose soil from the trenches, and potatoes are planted on top. The seaweed is the only fertiliser required for a bounteous crop of spuds. The ‘lazy’ beds warm up more quickly than flat ground. Cold night air filters down into the trenches, protecting the plants from frosts. The following year they dig trenches in a new spot, and the old ones are turned over to create beds full of nutritious, productive soil.

In France, coralline (red) seaweed was used to ‘sweeten’ the soil. Contemporary studies have shown that red seaweeds contain up to 80 percent lime (calcium carbonate), which can raise soil pH. Seaweed in varying stages of decomposition. The front bed is fresh, the rear beds have had two weeks to rot.

Studies of seaweed extract used at the germination stage (compared to a control group) show plants have:
• increased root and shoot growth;
• healthier foliage, ﬂowers, and fruits;
• greater resistance to pests and diseases.

6 WAYS TO USE SEAWEED

In one Australian study, crops treated with seaweed extracts showed resistance to specific diseases, including:
■ Albugo candida, the cause of white blister rust on brassicas;
■ Sclerotinia minor, a fungus which  attacks lettuce;
■ Plasmodiophora brassicae, which causes clubroot.

They are likely to have similar properties to D. potatorum.

Slugs and snails don’t seem to like seaweed. I use seaweed as mulch in my garden, and I don’t have many slugs and snails. However, I’m also vigilant about clearing away weeds and debris, which provide good hideouts for them during the day, another good way to keep numbers down.

Seaweed advocate, Dr Leonard Perry of the University of Vermont, believes the salt content repels them. It’s also possible it’s due to the scent of iodine. Other experts say as the seaweed dries, it becomes hard, crinkly, and irritating to slugs and snails’ soft undersides. Most birds don’t like seaweed either. When it’s wet, they get tangled easily; when it’s dry, it’s a scratchy deterrent. Use seaweed as soon as possible after harvesting it.

It has been found to contribute to better growth and crop yield in plants. In soil, scientists have documented improved water-holding capacity and an increase in beneficial microbes.

You can add clumps of seaweed to the base of holes before transplanting seedlings for extra nutrition. Potatoes, tomatoes, rhubarb, and asparagus especially seem to benefit from this method, and gardeners report growing significantly larger vegetables when seaweed is used this way. Seaweed layered on top of soil to help improve its condition.

If you want to avoid the smell of decomposing seaweed in the garden, you can leave it to dry, then crush and sprinkle it over the soil. Small amounts of dried seaweed can be ground in an old food processor and sprinkled around plants. Livestock also benefits from it. Seaweed works well as a mulch because it’s heavy and won’t blow away, but is still porous, so plant roots can get air. The bonus is there’s no chance of introducing weed seeds. It also keeps moisture in the soil, reducing the need for watering.

If you have limited amounts of seaweed, a liquid fertiliser is a good option. It’s also the best way to administer nutrients to potted plants.

• fill a large bucket or container half to three-quarters of the way with seaweed;
• add water until the seaweed is just covered;
• cover and leave for at least three weeks, stirring occasionally – set the bucket far away from the house and neighbours as the smell can be quite intense;

To use, dilute a portion of the liquid until it’s the colour of tea. Apply to roots, seed trays, and plant foliage.

Add seaweed to your compost pile with equal parts brown (carbon) material, such as dried leaves or straw.

1. Collecting seaweed is as simple as walking down to the beach with a bag. There are no limits if you want to harvest it for personal use, such as fertilising the garden. 3. Seaweed absorbs pollutants in the water, so only collect seaweed from clean, unpolluted beaches.

4. Gather clumps that aren’t completely dry. Give it a few shakes before putting it in a sack or bucket to free any sea creatures hiding in it. 5. Use the seaweed as soon as you can. The longer it sits, the more it decomposes, and the less beneficial it is. You get the most nutrients from it when it breaks down in the garden (or compost pile).

6. Don’t wash it. There’s no evidence that the salt on it is harmful, and it may be desirable for pest control.

7. Seaweed may have sand and tiny bugs in it; these are also fine for the garden.

WHY NEW ZEALAND SEAWEED IS SPECIAL

Seaweeds in New Zealand produce higher levels of sulphates and other constituents, according to marine scientist Dr Jenny Smith. A study in the US comparing the seaweed-based foliar fertiliser AgriSea (made in New Zealand) with equivalent products from the US, found the US products had to be used at 10 times the rate to get the same results as the AgriSea product. AgriSea uses the native New Zealand brown seaweed Ecklonia radiata.

Seaweed 101: How to forage, harvest and use seaweed

How to make an easy seaweed garden spray