Blog: A bathroom at last


The demise of a local coincides with the near-death of the family’s bathroom plumbing.

Until recently, the inhabitants of our valley have had their driving kept in line by an old brown horse whose roaming has acted as a sort-of portable speed bump. Free to ramble at will, Sniff (as she was known) had a predilection for standing dreamily on bends in the quiet road, gazing into middle distance.
“Look out for Sniff,” we’d sometimes remember to warn. A motor-biking friend who failed to take heed is scarred from his efforts to dodge her. She seemed unperturbed when unwary drivers hit their brakes to avoid a collision, and clearly felt the road was as much hers as anyone else’s. We typically encountered her when we were driving out to somewhere. Coming along the valley floor, we’d round the corner and there she’d be – bang smack in the middle of the road. Long minutes would pass as she slowly swivelled her head to consider our presence. Unwinding car windows, we’d coax and cajole her to shuffle aside and let us through. On good days she would do so. On other occasions (and usually if we were in a hurry), she would eventually move, but forward, plodding methodically up the road as we inched impatiently along behind.
Every winter was expected to be her last. Was she 30 or 40? Our neighbours, who’d inherited her for their now-grown children, weren’t certain.
And then one day last summer, out walking with Vita and Zen, we rounded the corner and discovered a patch of blood on crushed grass. As our dog examined the evidence, our neighbour appeared to break the sad news. Sniff had fallen and hadn’t been able to return to her feet. After ending her suffering with a bullet, she’d been towed by tractor to an awaiting hole and nudged into her grave.
When four-year-old Vita requested to witness the burial, our neighbour shifted uncomfortably from foot to foot. “Problem is,” he confided, “she’s landed in the hole on her back. With her legs poking up out of the ground. I can’t bury them.” He scratched his head ponderously. “Might have to chainsaw them off.” Leaving him to deal with the indignities of rural rigor mortis, we ambled away, saddened by the thought of a Sniff-less future. 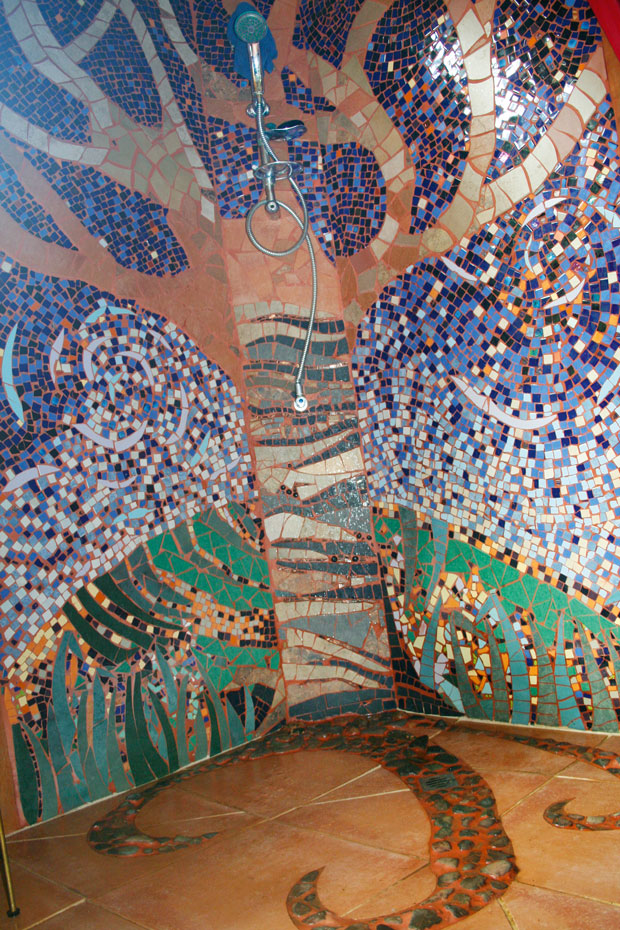 Back home, we faced an absence of equal bleakness in our bathroom. It was the shower. Many months ago, James had done a labour exchange with a local artist – he built her a shed in return for the creation of a large mosaic for our bathroom.
“It’ll be done in about six,” she told us when we dropped off the panels.
“Six what?”
“Weeks,” she’d replied, laughing. “Definitely weeks.”

More than six months later, the artwork finally came home and was installed as the surround for our shower. James plumbed in the califont and we prepared to toast the official opening of our finished bathroom. For a brief, glorious moment, hot water rained upon us and we danced about joyfully as if a drought were breaking. Then the water mysteriously reduced to a trickle. Worse, the califont only heated the dribble to a scalding 75-degrees Celsius.

Donning our amateur plumber caps, we tried everything from dismantling the water system to flushing the califont for mason bees. A plumber friend gave long-distance advice that proved useless. A gas fitter tested the califont and declared it was fine. Three weeks later, we again took it to him and rather testily received the same verdict.

With the warm weather fading, outdoor bathing was losing its appeal. James and I felt cursed. And dirty. Then James had a brainwave. Had the shower hose become kinked inside its casing?
In short it had and with a simple flick of the tube, hot running water was restored. This winter, the five years of outdoor bathing we endured prior to our bathroom’s completion feel tremendously worth it. Luxuriating under hot running water, out of the wind and surrounded by artwork sees us singing lustily amidst the suds.