Blog: The case of the disappearing duck

Last week when I went down to feed our three ducks, I was appalled to see vast amounts of downy feathers fluffed over the ground. When only two ducks came waddling up for their dinner, and they reappeared as a twosome the next day as well, I concluded the worst.

‘A stoat’s killed a duck,’ I announced to the family.
It’s true I lacked a corpse, but a freshly killed chicken had just been uncovered in the chook run, sucked of her blood by some vampiric mustelid. The strewn duck feathers and a missing duck seemed evidence enough of another attack. 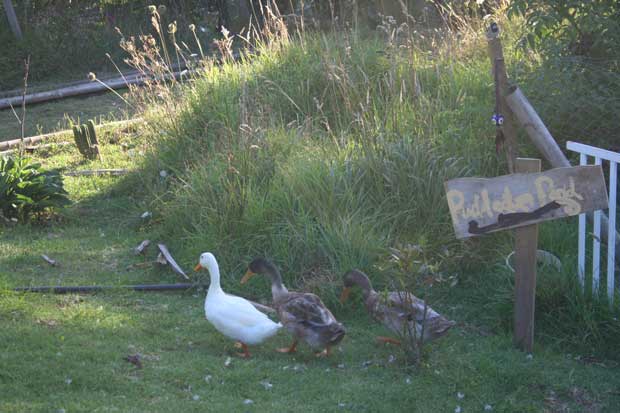 The three ducks, before the disappearance.

‘I think it was the boy,’ five-year-old Vita told me. We haven’t actually had any idea of our ducks’ genders but whenever I sat and talked to the trio, the one that had vanished would tilt its head to survey me with a kindly eye. He looked like he should be called Arthur and get about in a home-knitted vest. I had a feeling he’d put the kettle on if you ever visited him in a Beatrix Potter tale.
We brought our Pekin ducks home from a friend’s last November. They tumbled from a box into their new enclosure like fluffy yellow tennis balls, splashing about in the children’s paddling pool as cute as cartoons and enchanting everybody but two-year-old Zen who eyed them resentfully and pelted them with maize when he could. 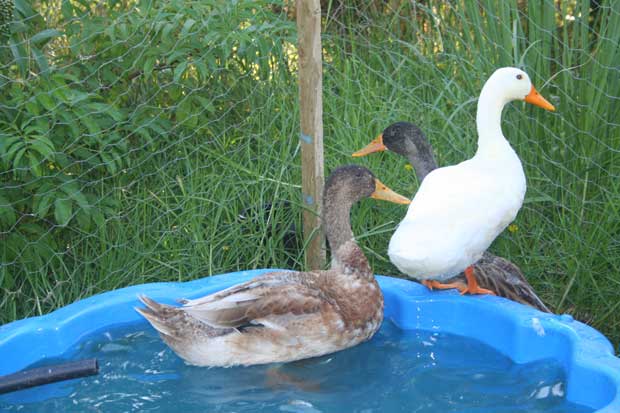 As they grow, so too does my delight. Physically, they are elegantly minimalistic; a single brush-stroked outline of curvature. Their desire for snacks makes them gratifyingly obliging at retrieving thrown food scraps. When they call, it’s an aha-ha-ha that sounds like jolly, laughing witches. Better still, they hoover up bugs from the sides of the raised vegetable beds, make excellent lawn mowers, and their dirty pool water is a first-rate daily tonic for our fruit trees to drink.

We were told to keep the ducks in an enclosed space for their first month, in the hope it would establish as the place to return to each night.

The imprinting of home got me thinking on a wider scale. Watching the children romp about the region, I’ve wondered if this slice of the Far North has set into their psyche, becoming a landscape that will always sing to them of some sense of belonging; with its pohutukawa-fringed, postcard beaches, verdant valleys, sparkling rivulets and clean-breathing forests swathing rugged hills.

I spent my childhood in Wellington and even though it’s been years since I went back, images of both Wellington’s and the Wairarapa’s wild coastlines have the ability to thump my heart like a seismic jolt. Memory becomes a sudden stream: summer’s scent is bleached driftwood, harakeke (flax) flowers and whole steep hillsides of gorse in yellow bloom, below which, Cook Strait currents run through submerged strands of kelp trailing from jagged rocks.
What is it about a location that pulls a salmon back up the right river; calls an albatross across oceans to the site where it hatched and guides a migratory bird in an arc around the globe?
After a month’s confinement, I released our ducklings into the wider garden, holding my breath and exhaling with relief as they waddled back into their run that first night. Home for them, then, is the citrus orchard and the elderflower bush hanging over their pool. It’s the shade of the massive totara tree and a rough wooden sign saying Puddleglum Pond, painted wonkily by the hand of a five-year-old still mastering her letters. 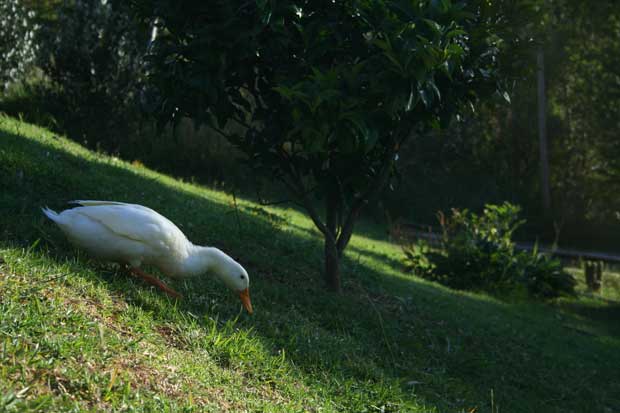 It’s also half a dozen stoat traps dotted in wooden boxes around the garden. James set them all during my moment of mourning to save our two remaining ducks.
And then, two days ago, like some kind of beaked Lazarus returning, Arthur-duck waddled out of the bush and back from the dead at dinner-time. He wolfed his maize and rice with enthusiasm, unperturbed by the miracle of his return and has settled back into his old routines.

When the ducks are six months old, we’ll apparently know their gender by a curly tail feather that sprouts on the drakes. If we have girls, we’ll get duck eggs. If they’re a mixture of sexes, they might reproduce. My vet friend assures me this is okay, even though the parents would be brothers and sisters. If they’re all males, the same friend has indicated they’d do well in a roasting dish.
Over my dead body! No Pekin of mine shall become Peking duck, no matter how wolfishly James licks his lips. Even if they never produce ducklings or eggs, the trio has already given me far more satisfaction than I ever expected and our home is theirs for as long as it holds them to it.